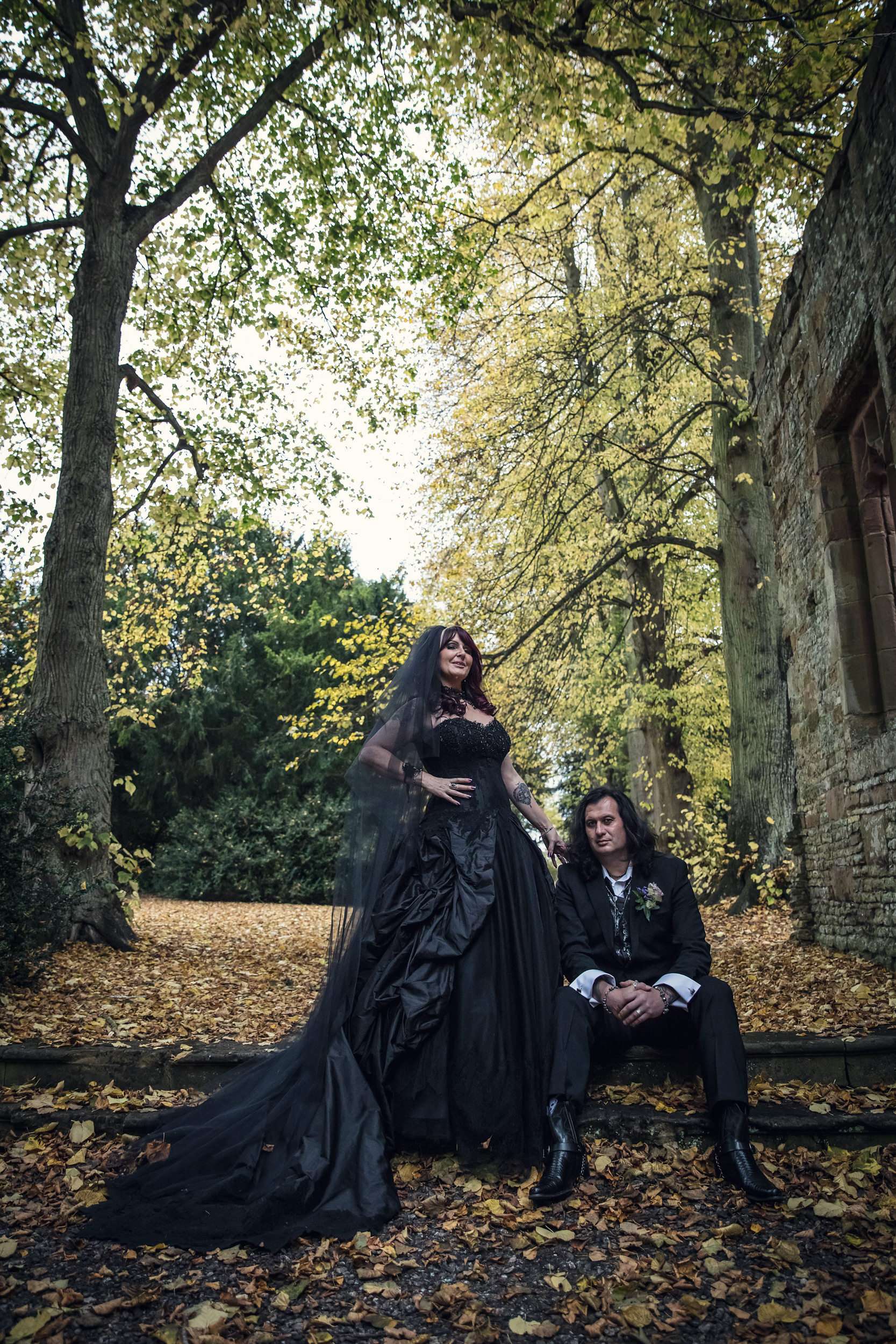 Karen and Dean were married in the ruins of Ettington Park‘s chapel in October. Their day had a gothic theme which was reflected in the bride’s choice of black wedding dress (made by The Couture Company), their Black Cherry Cake Company cake and all the decorations. They used skeletons, trailing ivy, dramatic candelabras with black candles and purple and black flowers. 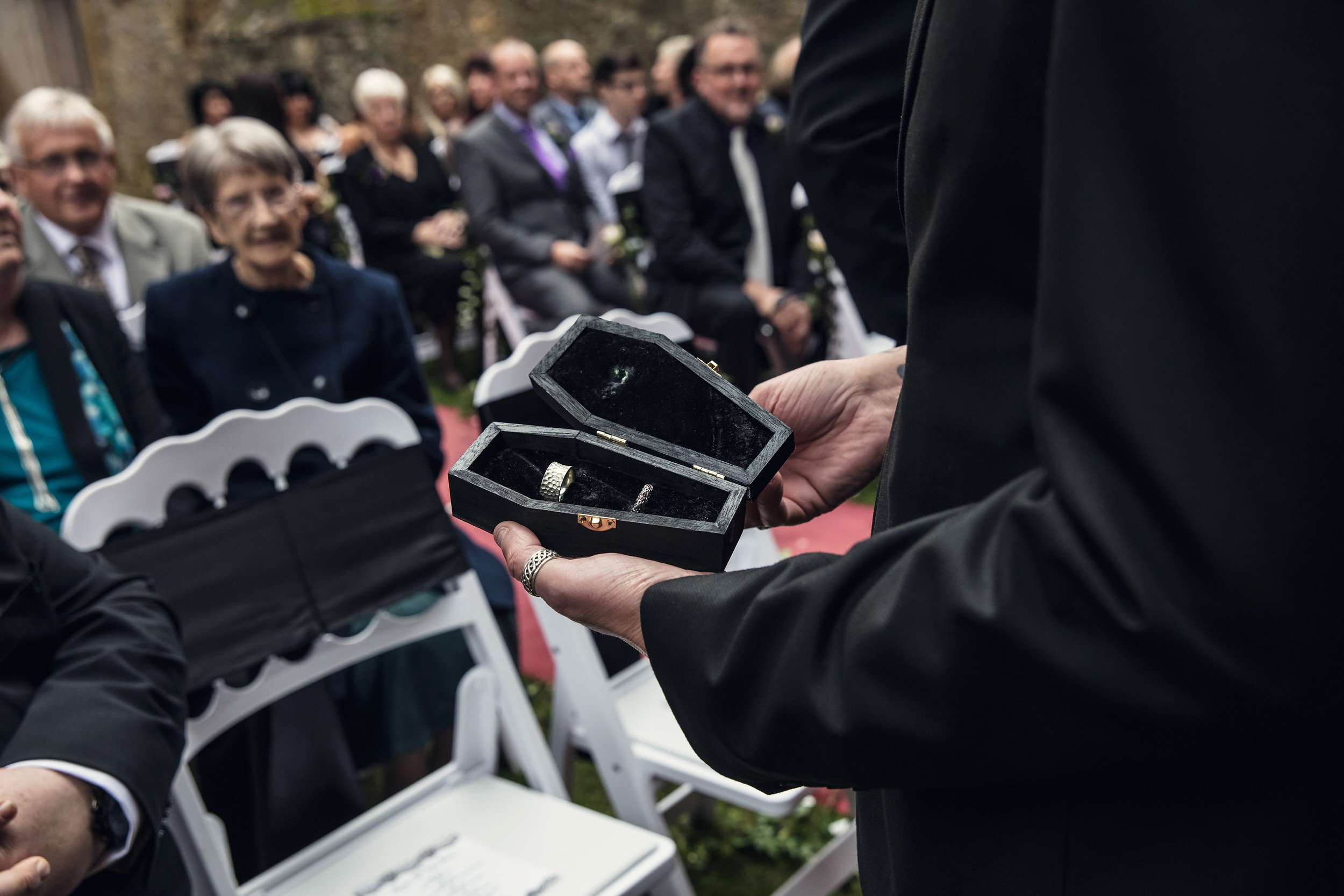 They were helped a lot by their friends too. “We were inspired by our love of goth and rock music”, said the bride. “We had friends who made lots of decorations that were spread around the venue. Tony Iommi from Black Sabbath and his wife Maria attended as they are very good friends of ours too.” 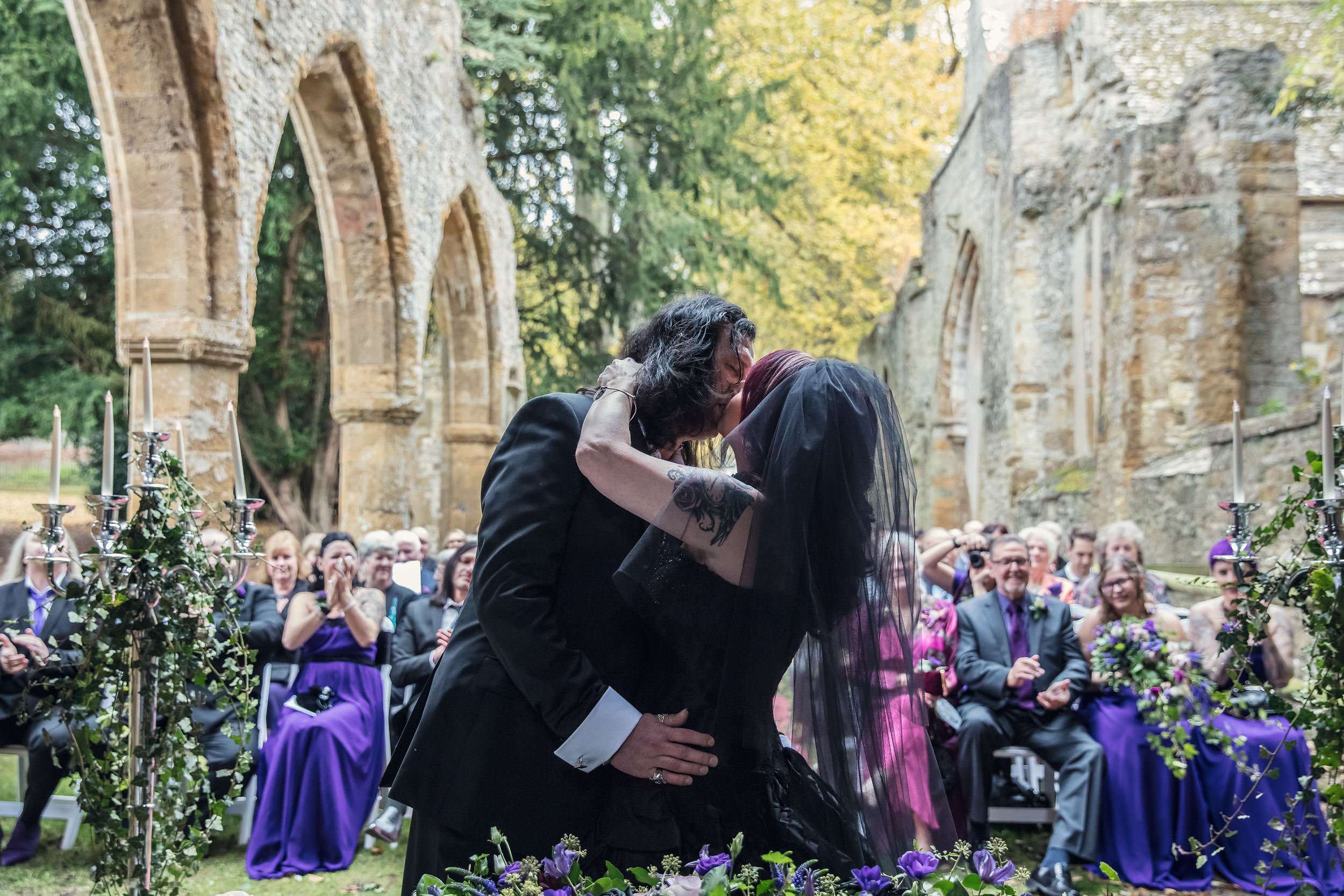 The best moment of the day for the bride was seeing her husband-to-be for the first time as she walked down the aisle. “The autumn weather was perfect for our outdoor ceremony. We had three page boys throwing rose petals followed by three bridesmaids. Then I entered with my father to Love Walked In by Thunder blaring out.” 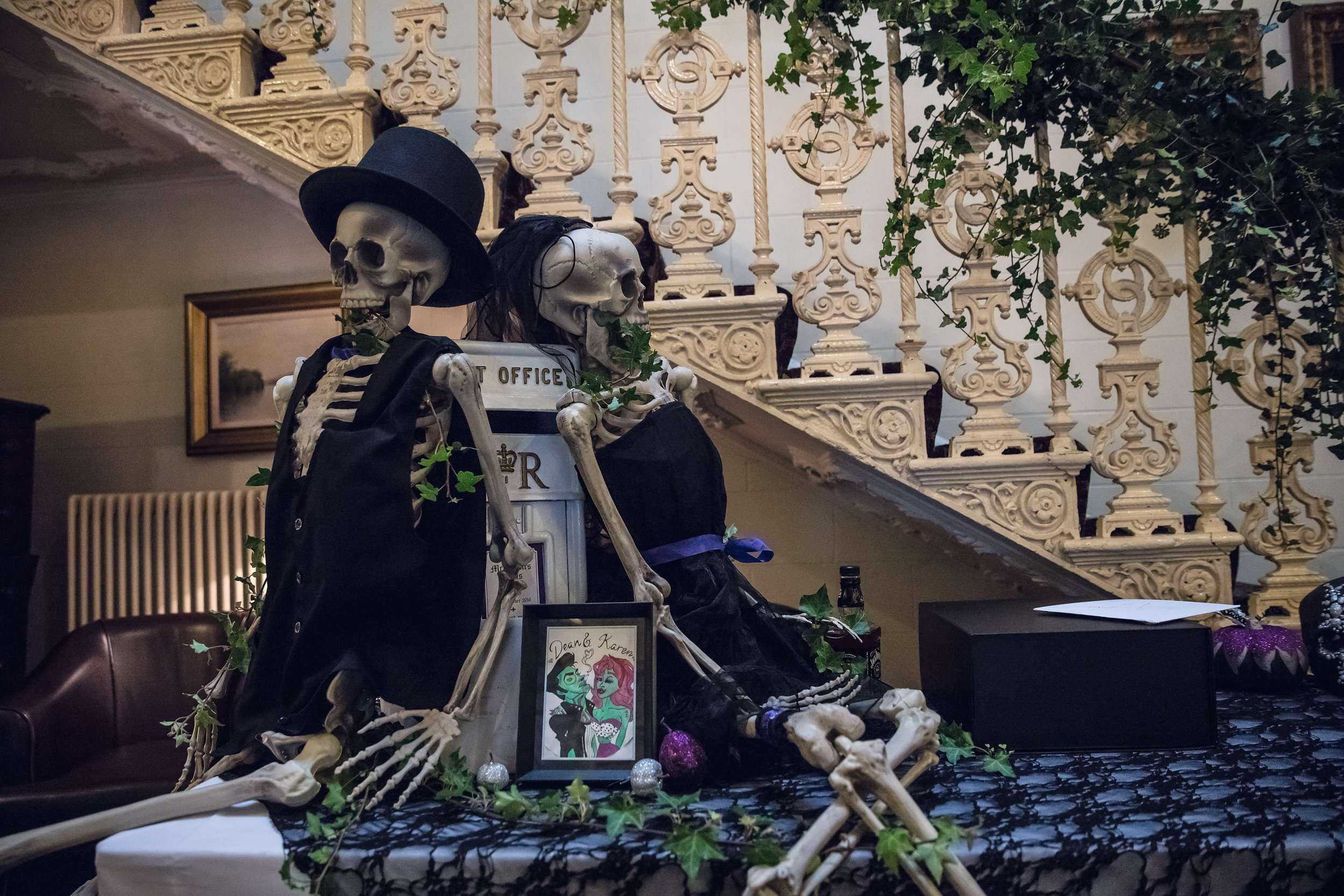 Of their £12,000 budget their biggest cost was the venue but it had everything they wanted in a wedding venue. The bride’s dress was also one-of-a-kind and exactly what she always envisioned she’d be married in. “I never really thought I would find my perfect man let alone have the perfect wedding to marry him”, she concluded. “We love each other more every day… For Dean he said ours was his favourite wedding – ha!” 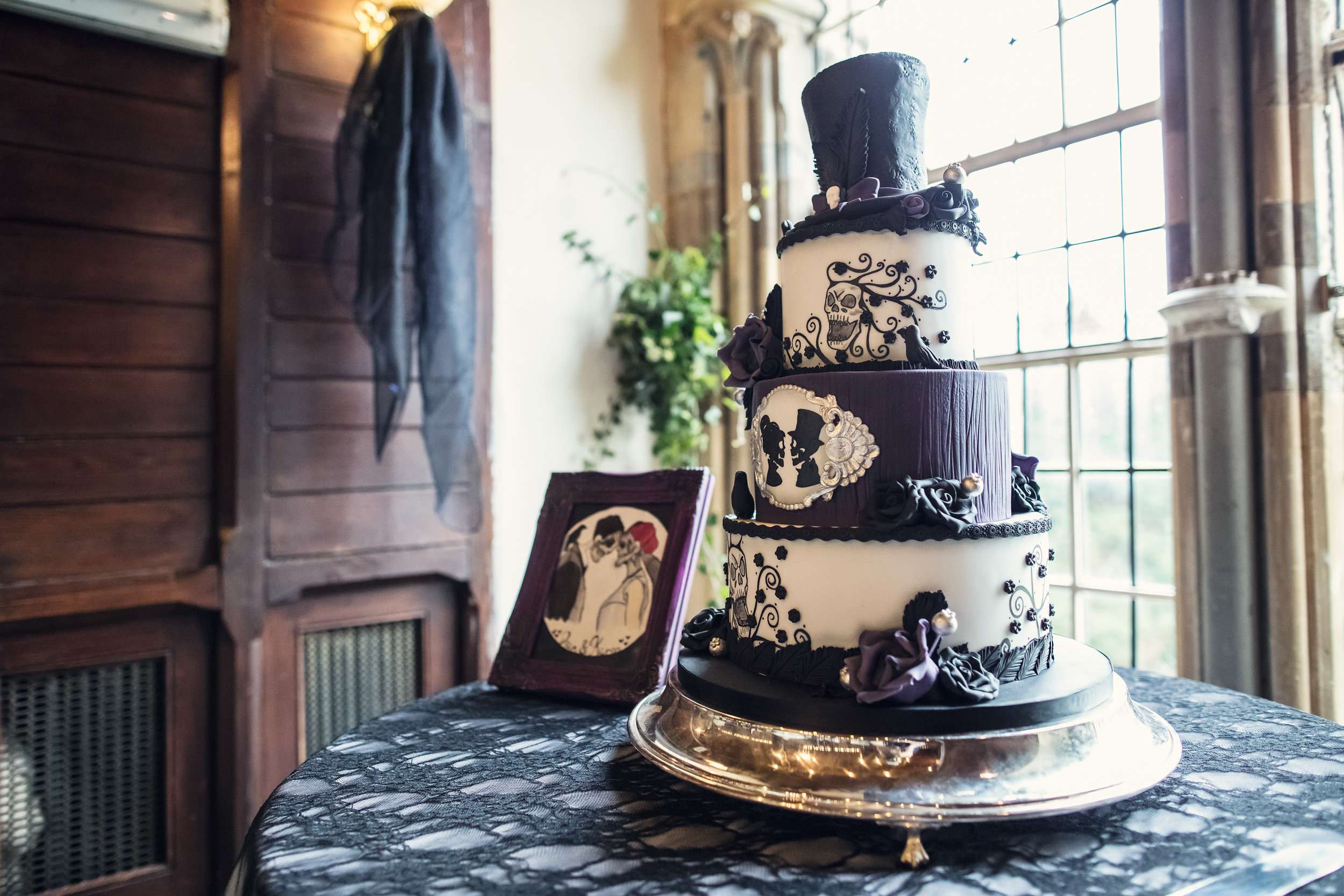 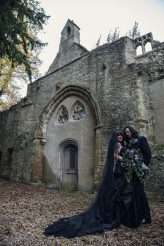 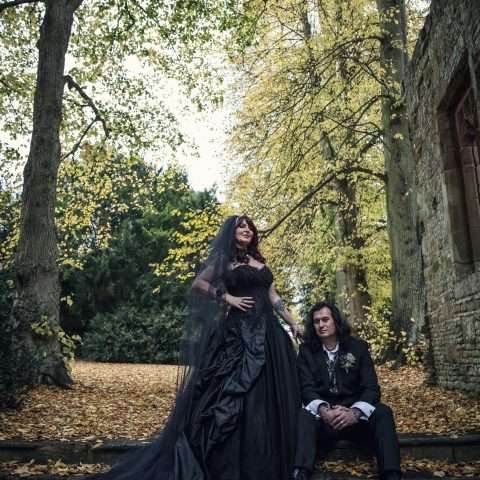 Gothic Asylum Wedding with Baseball Bats Instead of Bouquets!

Stormy and Dan were married in London and although they didn't want a theme, their personalities and sense of style really came through on the day. "We flirted with the idea of a theme but to be honest it was difficult to find something that fitted the both of us and wasn't super stressful to implement", Stormy began.

We feature a lot of Disney inspired weddings, but I think this may be the first Disney Villain themed day, and quite frankly its a genius idea for a Spooky Season wedding! Peter and Kayleigh were married in Liverpool last October and they wanted a mix of traditional and alternative elements to go along with a sprinkle of Disney Halloween.