Lynne and Danielle were married in a marquee on Hengest Farm in Surrey. The wedding took place in May but as we all know, the British weather is anything but predicable and they had hailstones! Although they had to make some last minute changes, it didn’t put too much of a dampener on the day, they still threw an almighty party and had the best time ever. 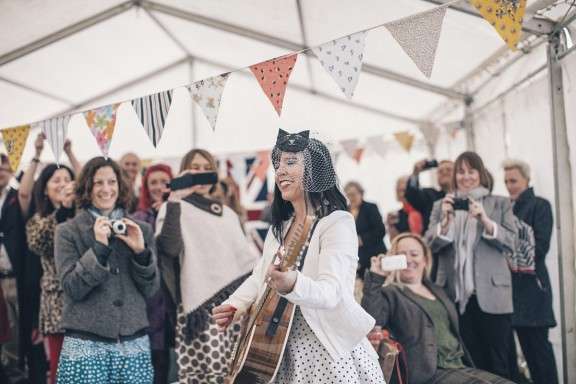 “Our wedding was cheap, cheerful and full of love with a bit of red, white and blue thrown in”, began Danielle. “A few things didn’t go to plan like the van for setting up was cancelled the morning of, we discovered the marquee was broken with 14 hours to go, there was a hailstorm and my father-in-law ended up in hospital after being bitten by a dog. Oh, and torrential rain for an outside ceremony meant a last minute plan change. But it was all worth it. I had a genuine heart-in-mouth moment of when seeing Lynne the first time and seeing everybody we love in one place and having a ruddy good laugh was amazing!” 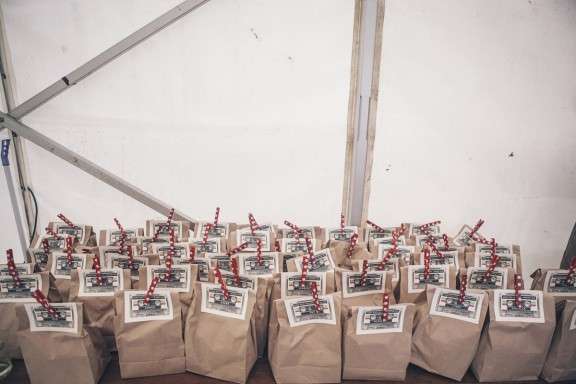 The couple wanted to do a lot themselves but they knew their limits! “I started trying to make our own tables. That was stupid”, Danielle laughed. “Making our own cake stands from records was dead easy though and the cupcake stand metal bits are a fiver on Amazon. The proper cake stand was made by popping a record over an upside-down measuring jug in a 100C oven for a few minutes and then supergluing another on top. I also made our wedding cake in advance and decorated with my mother-in-law when she arrived from the States. That saved us a whole heap of cash and I don’t even bake. Going for an iPod playlist rather than a DJ or band saved us TONS too.” 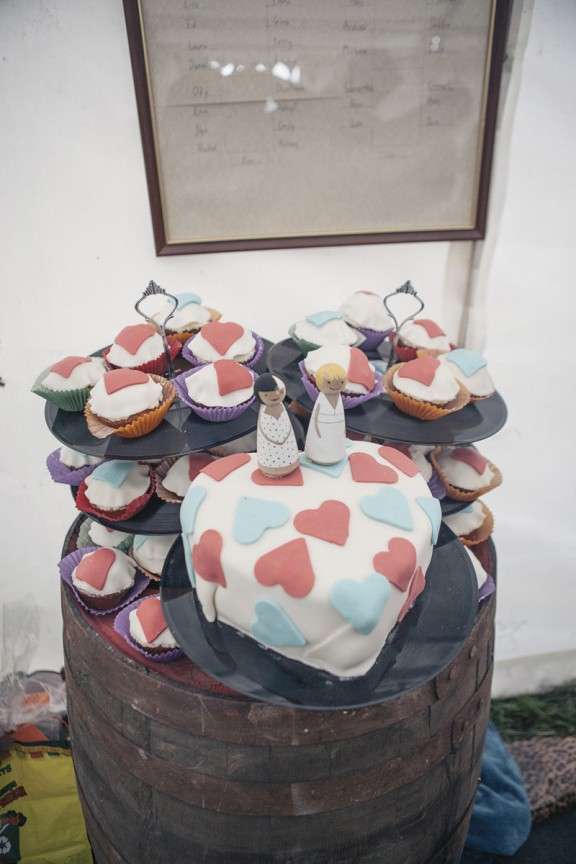 “Neither of us was keen on a lot of the faffing that happens at weddings, so we skipped quite a few of them,” she continued. “We just wanted it to be easy, cheap and fun as all get out. The crowd hummed ‘here comes the bride’ up until Lynne walked in strumming the intro to the Rolling Stones’ ‘Wild Horses’ on a 12 string guitar. My best friend did our ceremony, so we were able to have exactly the ceremony we wanted and use words like ‘bride’, ‘wife’ and ‘marriage’, which was very important to me. Our first dance was ‘Are you gonna be my girl’ by Jet and we just jumped around like lunatics.” 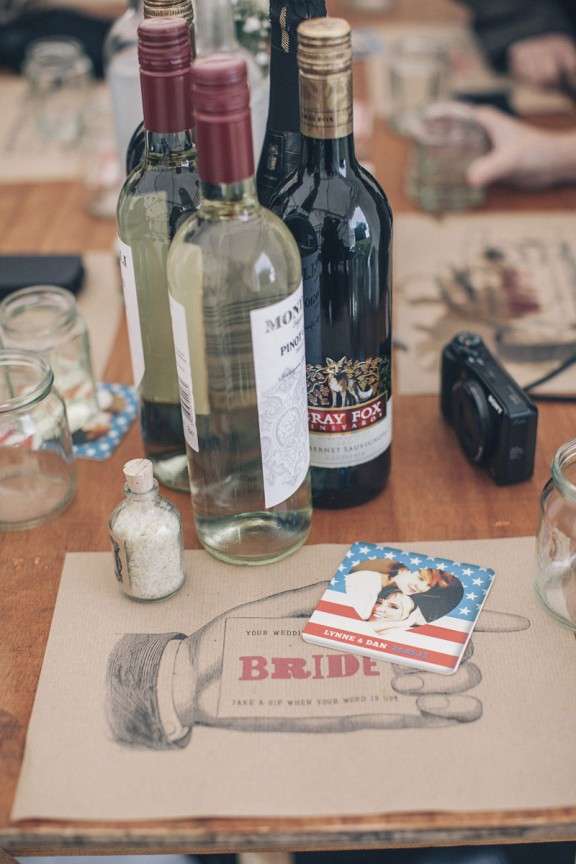 “For anyone out there getting married –  there’s going to be a minute when it feels like you have no idea what you’re doing or why you’re doing it and you’re fighting over stupid stuff like the gsm of your napkins”, she concluded. “It happens to everyone. Just make it to the wedding: as soon as it starts, nothing else matters.” 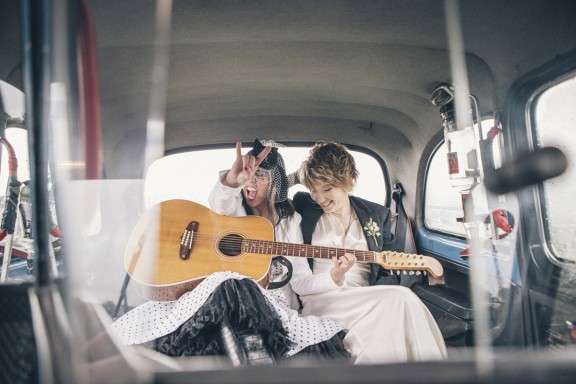 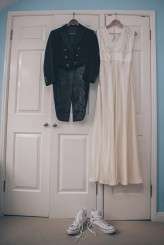 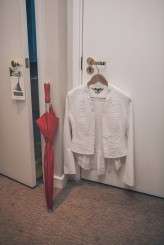 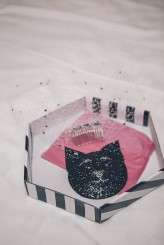 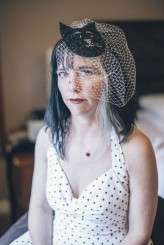 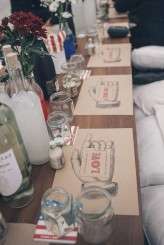 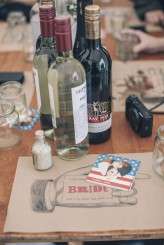 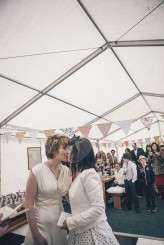 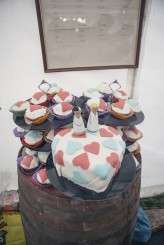 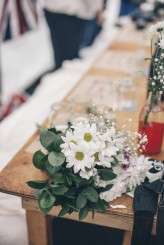 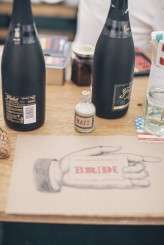 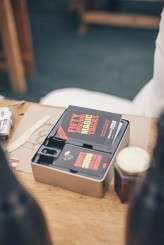 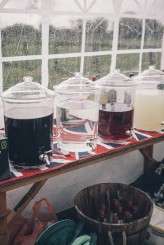 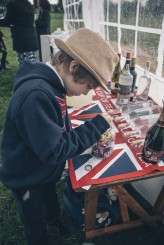 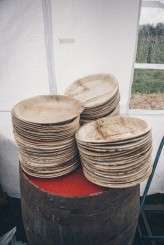 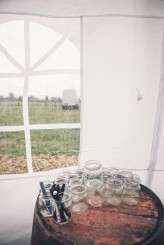 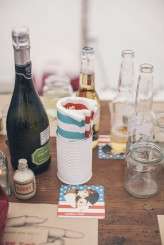 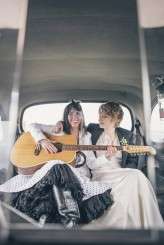 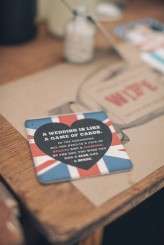 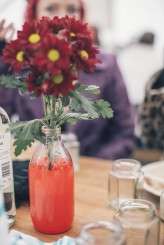 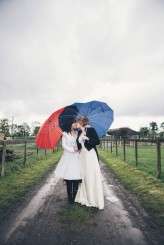 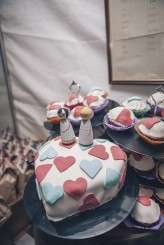