Valerie & Matthew had a gorgeous backyard wedding in their neighbour’s garden. What a cool couple!

The Bride describes their day below:
If I remember anything about this wedding it is that it was a collaboration of people we know and love. Almost every detail of the wedding was handed to us before we even asked for it (the catering, flowers, music, wedding planner). We wanted this to be an organic event and it really was. A lot of it came together on its own. We even decided to have the wedding captured on film to keep our natural feel. We had a year and a half to plan, but other than making sure we had all of the major details covered most of the work had to happen in the last few weeks.
Because this was a home grown wedding Matthew and I also had our hands in nearly every detail. I made the cake, some of the deserts, put together the kabobs, we both helped set up ( with the help of friends ), and ran several random errands the day of.

The day of our wedding was unexpectedly a hot day, but there was nothing we could do about that and we did what we could to make sure people were comfortable. We rush ordered parasols 2 days before the wedding, which ended up being a nice aesthetic last minute detail.
We chose to have a responsive ceremony where people in attendance played a verbal role and committed to us as a couple. The ceremony was straightforward, but we chose to make personal vows with each other after we left the wedding.
Once the reception started we relaxed, had some beers and essentially had a large scale backyard barbecue with 150 people who know us well. Though there were some minor glitches, we had fun and danced surrounded by our closest friends. After dancing, cutting the cake (something we decided to do to make the grandparents happy- we just wanted to eat baklava) and catching up with friends and family we decided to leave. We wanted to have a grand exit with sparklers (I found the website for the sparklers ironically by typing into google ‘buysparklers.com”.. and it worked and they had the best prices) and we ran to our car (due to my fear of the catching on fire- for real).
although it was a lot of work, I enjoyed myself and would do it all again in a heartbeart. 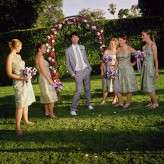 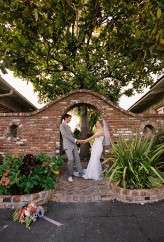 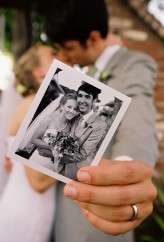 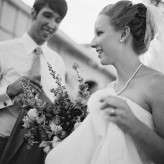