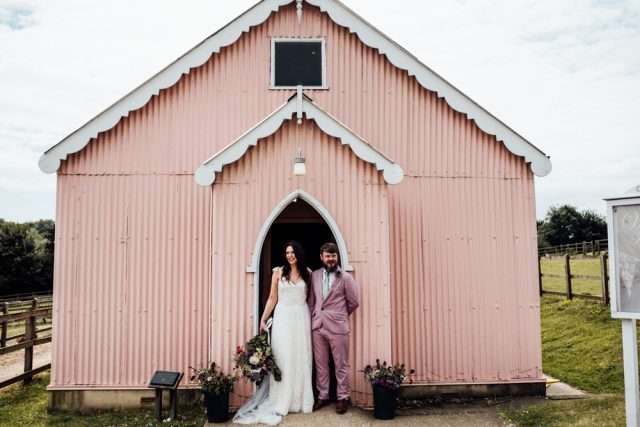 Emma and Jimmy’s Wes Anderson inspired wedding had a bit of a pink theme – from the groom’s suit (which he made himself!), the DIY flowers and even the chapel they were married in! Their summer wedding took place at Kent Life in Maidstone which is is a working heritage farm and museum.

“The thing that was most important to us was that the day felt relaxed and fun”, began Emma. “We had a bit of a mismatched theme with lots of Wes Anderson touches (we’re big fans), chevrons, animals (the venue is a farm), and music.” 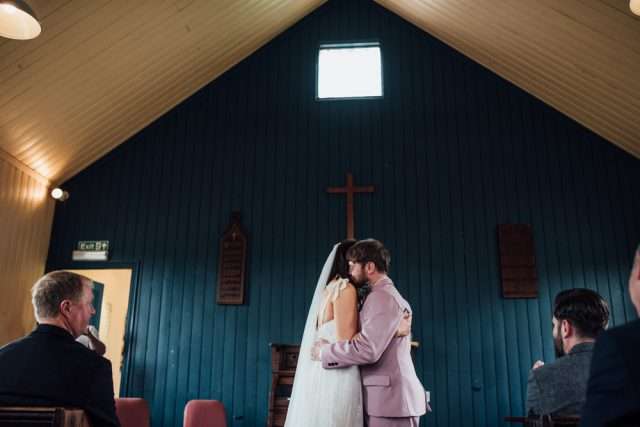 “We took a lot of inspiration from our venue. We had use of the grounds and three buildings. The ceremony took place in an amazing 19th century pink tin chapel called the Cuxton Chapel as it used to be in the town of Cuxton. The chapel is deconsecrated, which was perfect for us as atheists. Plus, I love religious iconography and symbolism so the dark teal interior with the organ and crucifixes were just perfect. It was like something from a film or a retro photo. Also, there are alpacas! We first visited Kent Life before we were engaged and after Jimmy proposed I think we both knew that there was never going to be any other option as to where we got married.”

“We also both absolutely adore animals, so we loved that the farm had such a range and we incorporated these into the wedding a lot. We had them on our invitations, Jimmy created colouring books for the kids at the wedding that had farm animals in, we spray-painted plastic animals gold for placeholders – our guests had farm animals and we had cats because we have two cats at home (Audrey and Norma), our cake topper was an amazing ceramic cake topper of a Mr and Mrs fox that we got from Etsy.” 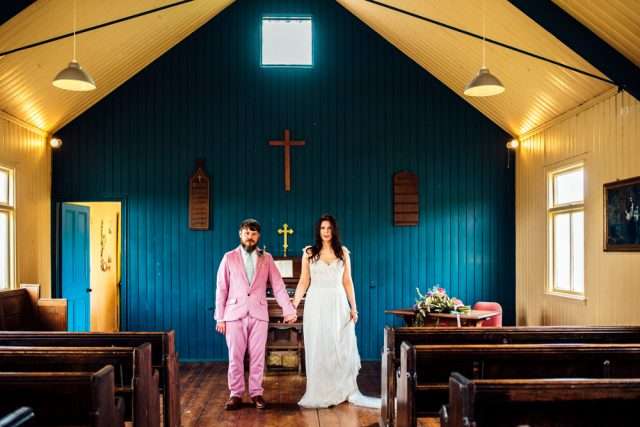 The bride chose the ‘Harley’ gown by Catherine Deane. It was the first dress she felt like herself in. Her shoes were a steal and found on eBay for £40! “I really struggled to choose a dress initially and didn’t order this one until five months before the wedding”, she explained. “My first appointment was at a traditional bridal store and I just felt so uncomfortable in every single dress I tried on. There was just way too much material for all of them, and I knew I wanted something easy to move in. My experience at Catherine Deane was amazing and although the dress was nothing like I imagined it would be, I fell in love with it the minute I put it on. My shoes were Collectif ‘Georgia’, which I bought for about £40 on eBay. I searched for low heeled (Jimmy and I are the same height) mint green shoes and these were really comfortable. I made my own crystal hairpiece as well as crystal hairpieces for my bridesmaids. I also made myself a crystal necklace.” 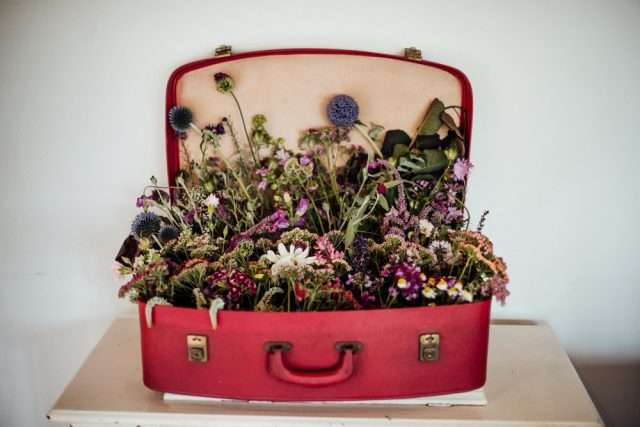 The groom actually made made his own pink suit! Jimmy explained, “I’m a fashion design graduate so I really had to make my own suit. I went for a dusky pink suit complemented with mint green tie, pocket square and lining to match our colour scheme. It was the first time I’ve ever made a suit as I’d previously only ever worked in women’s wear, but the creation went pretty smoothly without much stress at all.” 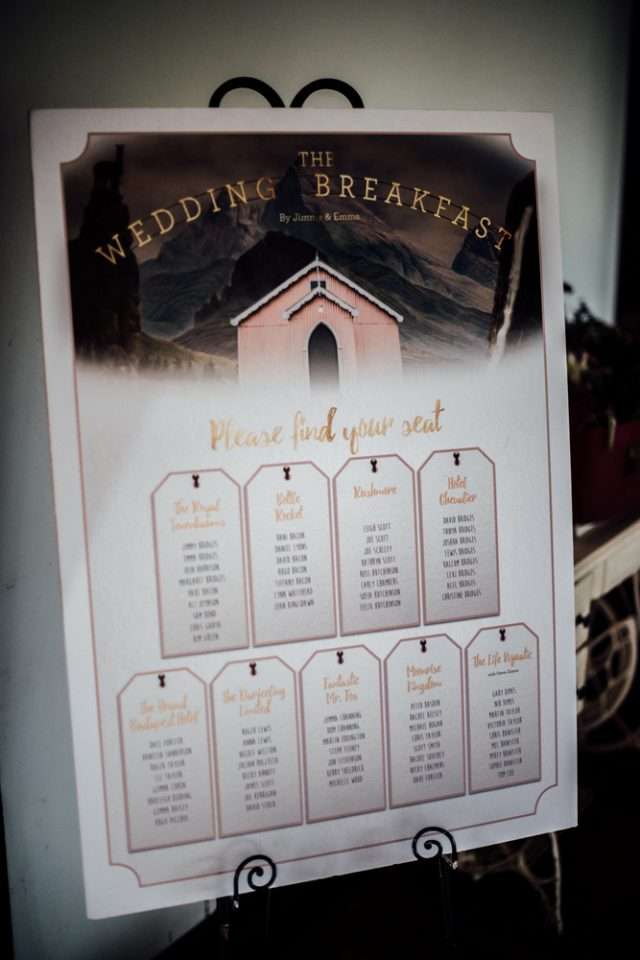 Their budget was £10,000 and one of the biggest cost saving exercises was all the DIY projects. The bride made the cake, she put the flowers together with help from her mother-in-law and some friends, and the groom designed the stationery. “Jimmy is a graphic designer so we worked together on what we wanted for the invitations and Jimmy brought them to life”, she said. “He always jokes that I’m his most difficult client! I really wanted our invitations to have foiling on the letters but we couldn’t afford to have this done professionally as we printed it all ourselves to save money. I researched a lot and found out we could do the foiling ourselves by printing in laser ink and using a laminator and heat reactive foil. It took ages and involved a lot of swearing at the laminator when it ate the card but we did it and we both loved how our invitations looked in the end. We received lots of great compliments on them, so much so that we’ve decided to open our own Etsy shop (Prints of Rochester) offering bespoke wedding stationery. We also designed enamel pins based on the pink tin chapel where our ceremony was and we had these made up. We included them with our invitations on a card that said ‘We’re pinning our hopes on you being able to attend’ – who doesn’t love good pun?!” 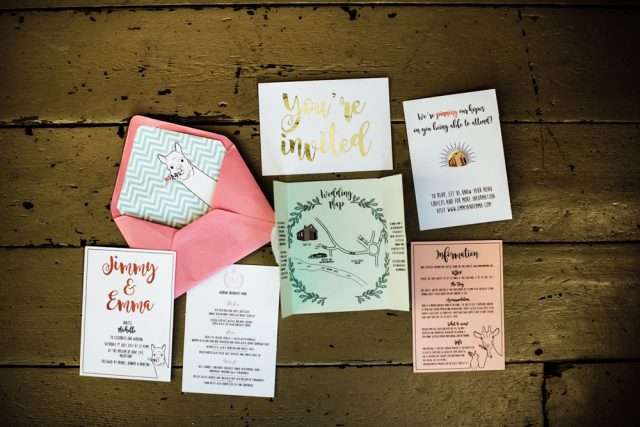 “We also made loads of paper pom poms for the party hall in our wedding colours, pink and green, and put up fairy lights. We made a flower curtain from artificial flowers and invisible thread, for the top table backdrop. We wrote some Wes Anderson film quotes on chalkboards. I also filled an old suitcase with flowers. We made our own table runners from some green chevron fabric that we bought from eBay. We named our tables after Wes Anderson films and Jimmy created designs for these that we put in frames. We spent months buying and collecting unusual glass vases and bottles for the tables that we put flowers in.” 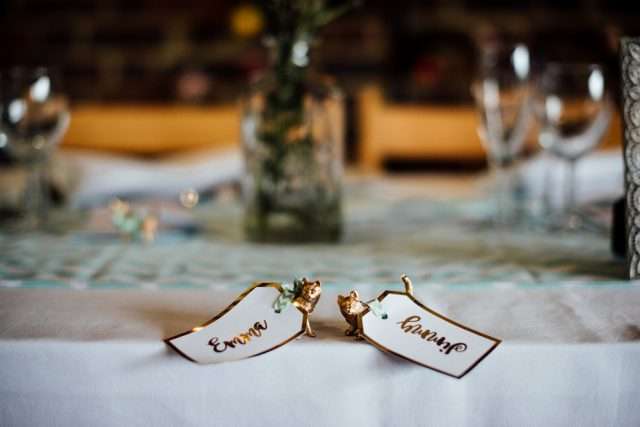 Despite all the effort they both made with the aesthetics of the wedding, the highlight of the day for them both was the ceremony. “I had anxiety about the thought of standing up in front of all of our friends and family for MONTHS before the wedding (even though I deliver presentations and group work for my job)” Emma said. “I was dreading it, but it actually turned out to be one of my favourite bits of the day. I thought I would bawl my eyes out during the ceremony but I only cried a bit in the tractor on the way up to the chapel. The ceremony just felt so RIGHT. I can’t explain it any other way, it just felt like absolutely the right thing at the right time and it was so natural.” 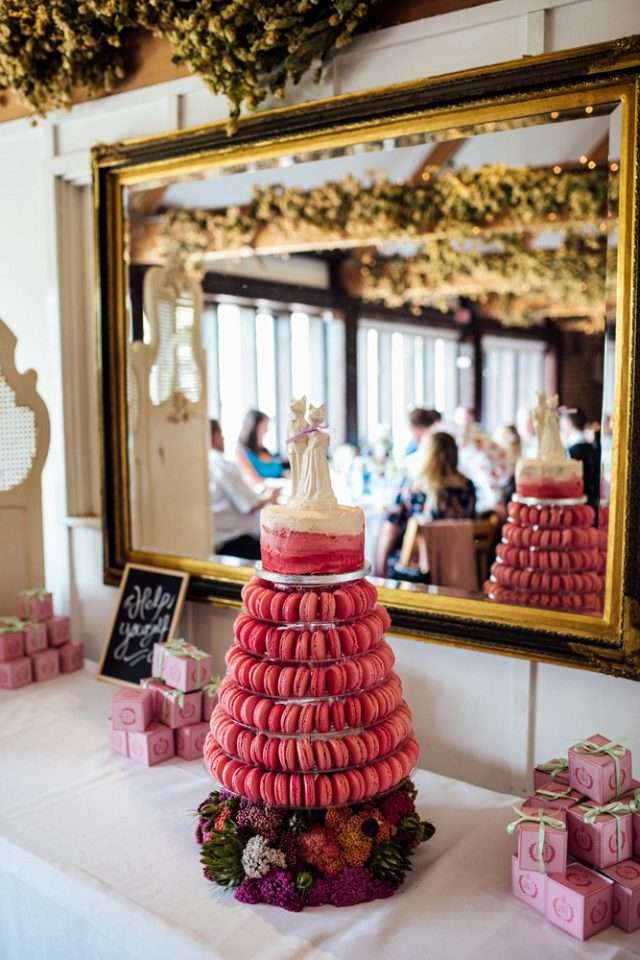 “During the ceremony I think we just focused on each other, I wasn’t preoccupied with the fact that there were 65 people watching me! Jimmy’s hands were trembling a little and I just felt love and like I wanted to calm his anxiety, which alleviated mine! At the end of the ceremony when we turned to face our guests it was so amazing to see the faces of all the people that we love the most, and I just felt completely overwhelmed and so loved and so lucky. The photos where you pretend the sign the register were funny, and we just messed about with it!” 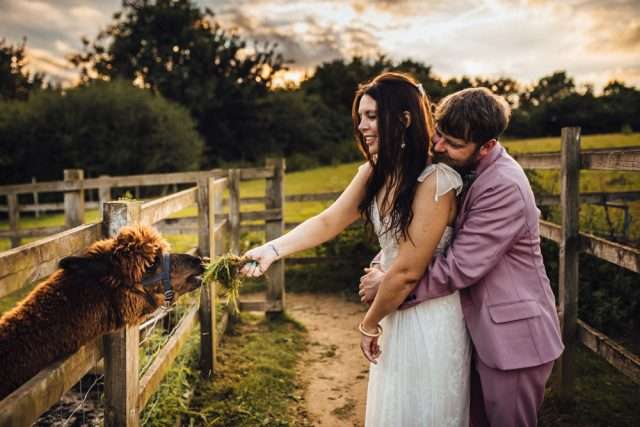 “The absolute best thing about the wedding was how involved in it we both were, it was such a team project”, she concluded. “I think that’s so important, I can’t imagine just one of us doing it. We’re a team in our everyday lives so there was never any question about the fact that we’d plan the wedding as a team. I also really loved that although we were super busy doing all of the DIY (and we both work full time) it never felt too stressful or overwhelming. Lots of people told us they thought we were planning on doing too much ourselves and that we wouldn’t be able to do it but we’re both quite determined and it was all fine. I’m really proud of what we achieved and it felt really authentically ‘us’.” 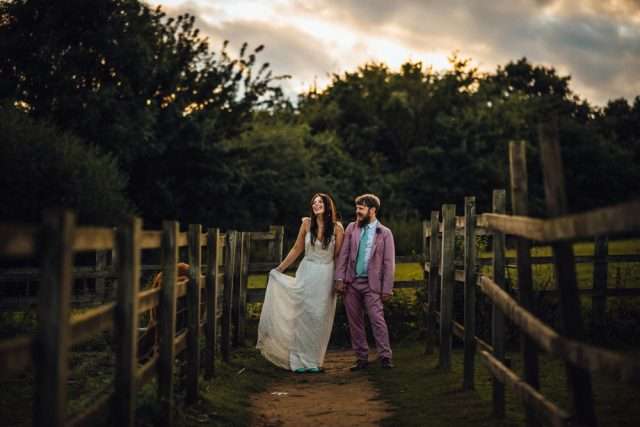 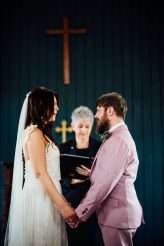 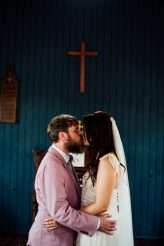 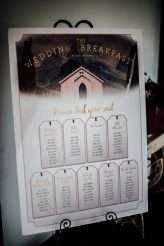 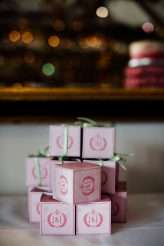 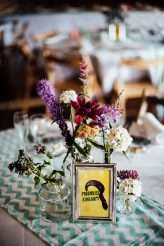 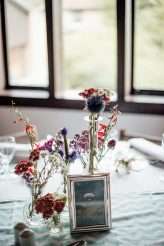 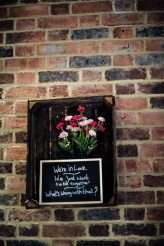 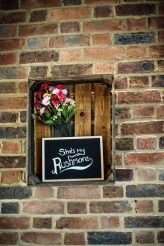 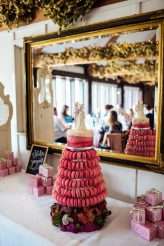