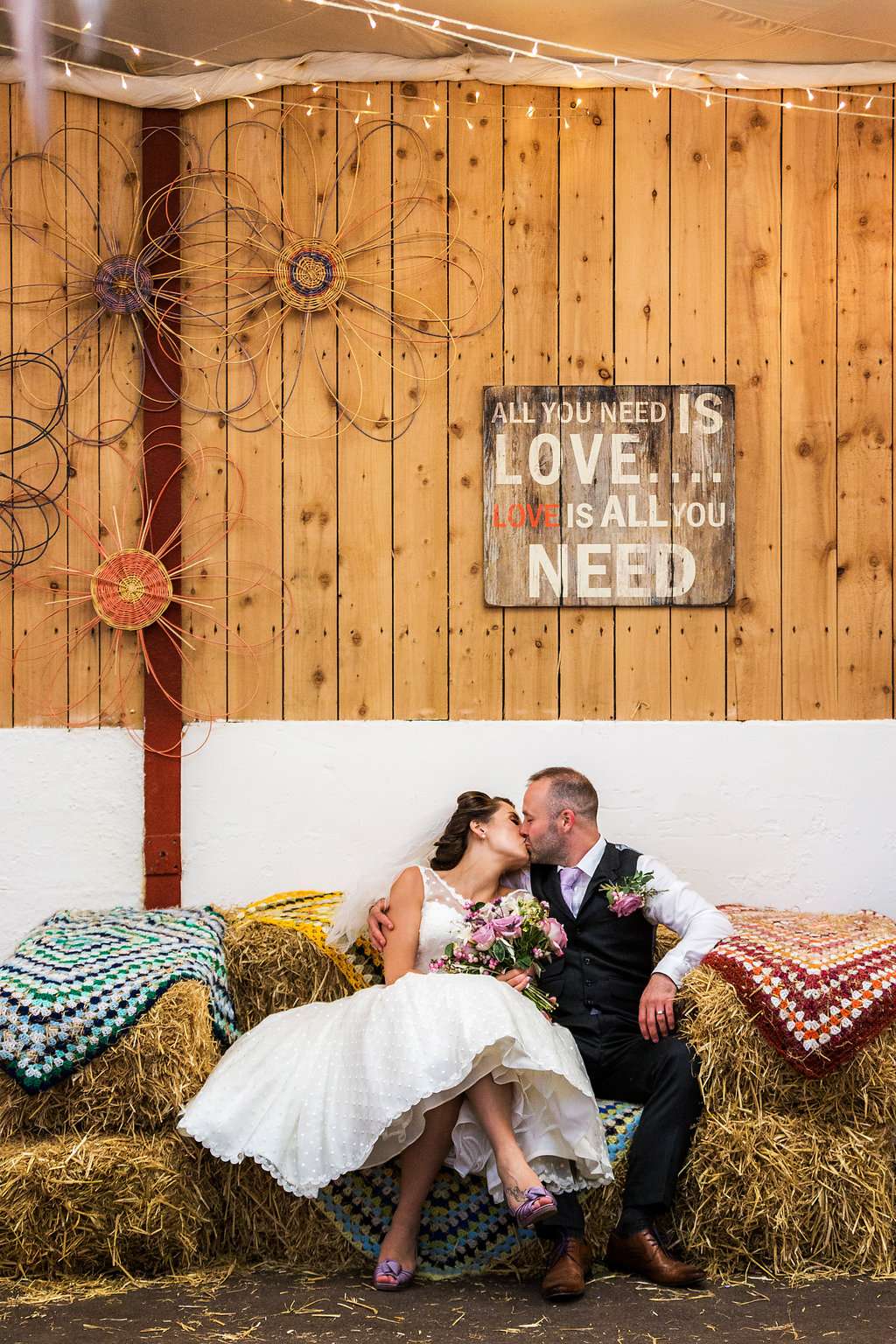 The Wellbeing Farm in Lancashire was the perfect venue for Christie and Kurt’s informal wedding. They didn’t have a colour scheme because they wanted something more organic and mismatched. “We tried not to have a proper theme as we thought more mismatched would be better”, said the bride. “However a ‘no theme’ theme was pretty impossible because when you start buying you naturally gravitate towards similar things.” 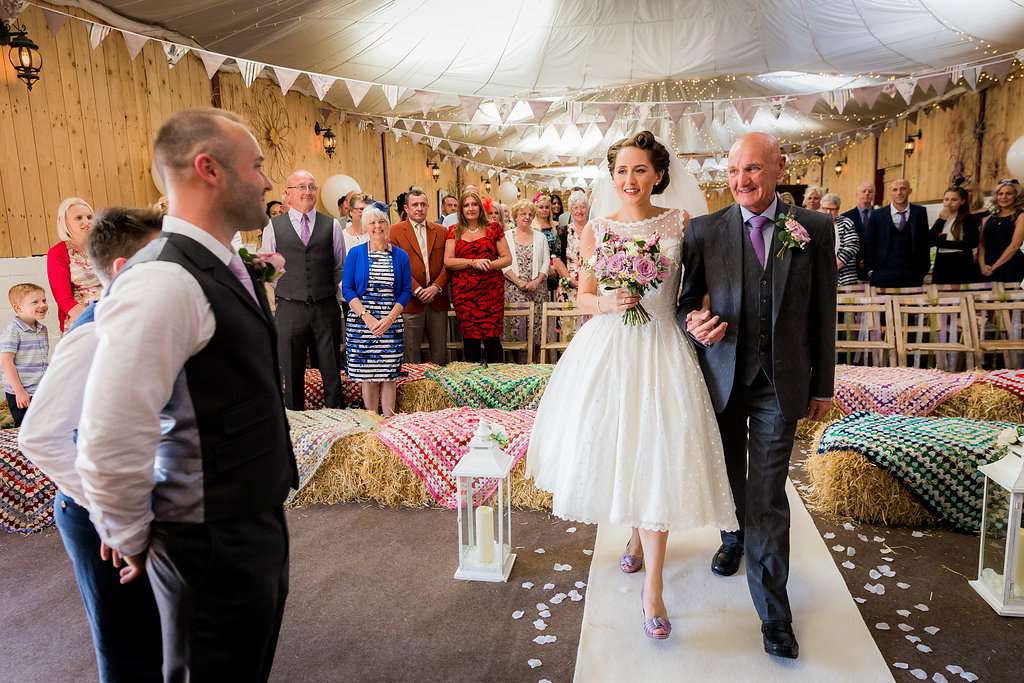 The one thing the bride did want though, was lots and lots of flowers. “We are both green-fingered and used to have our own allotment so the flowers were important to us. The Flower Farm were able to provide us with absolutely beautiful wildflowers, most of which they had grown themselves. We wanted flowers everywhere so there were fresh local flowers in every possible vessel including tea cups, tins, jam jars, milk bottles and milk churns. My mum and dad had a production line going. My dad would eat a tin of beans every day and my mum decorated them with lace, twine and wooden hearts for us to use as flower arrangements!” 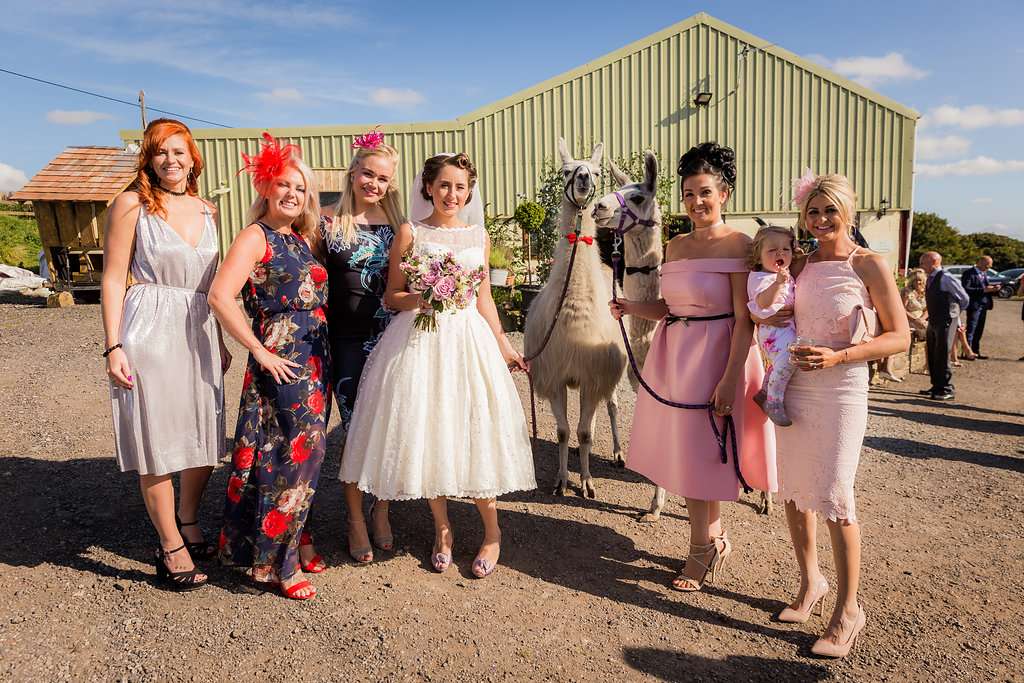 “We also had ivy and other fresh foliage all along staircase and over the door. Gilly, a member of staff from tour venue, sourced this from her own garden for us and wrapped it around the banisters for no extra charge. Our favours were lavender seeds for guests to plant and remember the smells and colours from our wedding.” 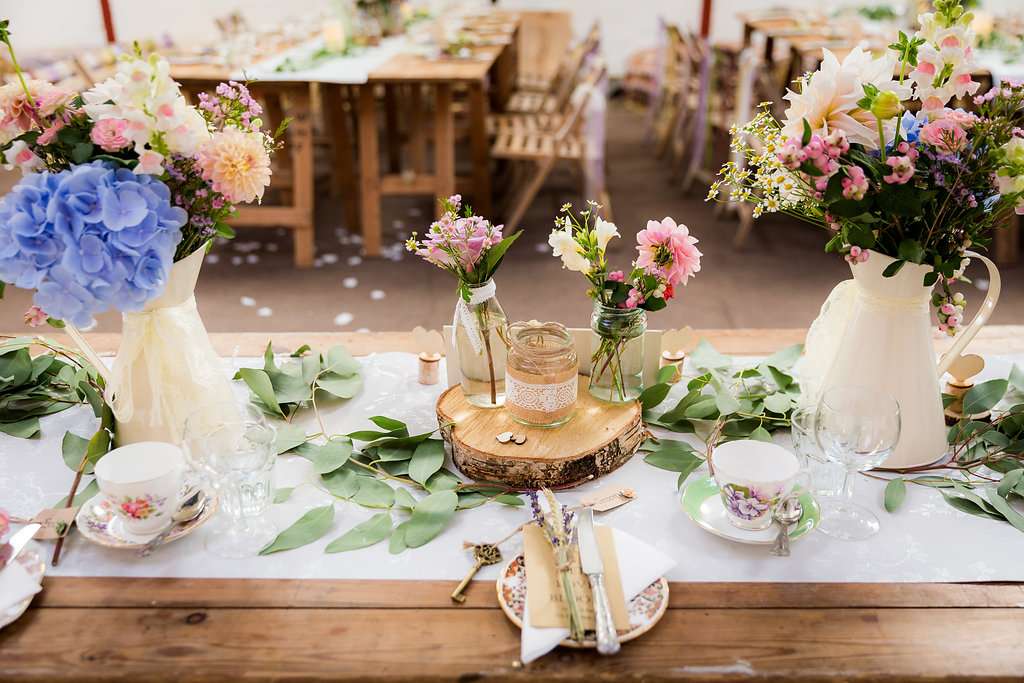 One of the most stressful – but rewarding – parts of the wedding was setting everything up themselves in the morning. “I wish we would have known more about the logistics at the venue before we booked it. In particular how much work we were required to do to set the room up. The price we paid was literally for the hire and we had to transform a blank canvas in under three hours. It was quite stressful and my mum and I nearly came to blows! When we arrived at the venue the wedding things from the previous night were still there nothing had been emptied or tidied. We had to build tables and this made our job even more difficult and rushed. We had to move other people’s belongings to place ours and we were not able to enjoy it as much as we would have liked as we were in such a rush. If we were to do this again we’d definitely have planned this better, checked the contract and asked for more help!” 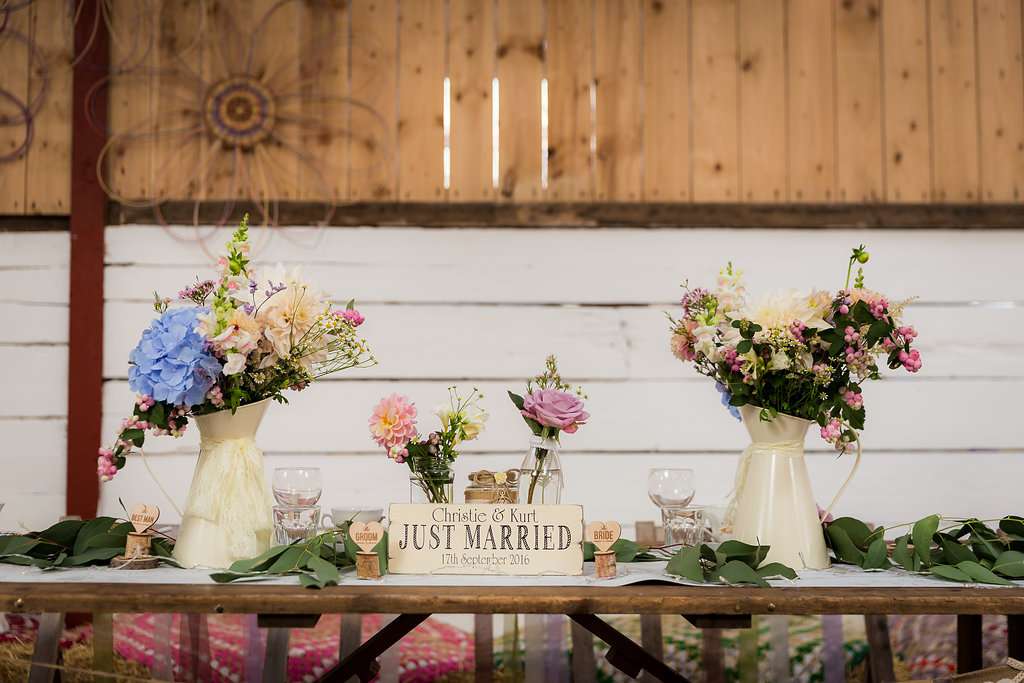 “We made so much ourselves. Our table names were named after various flowers we had in our wedding arrangements. They were glued individually to a small silver birch log piece. We provided over 50 pairs of flip flops all different colours in a picnic basket for the ladies to rest their weary feet. I think they actually went quicker than the retro sweet stand! We bought all the chalk signs from eBay and made a memory table of close family who sadly could not be with us.” 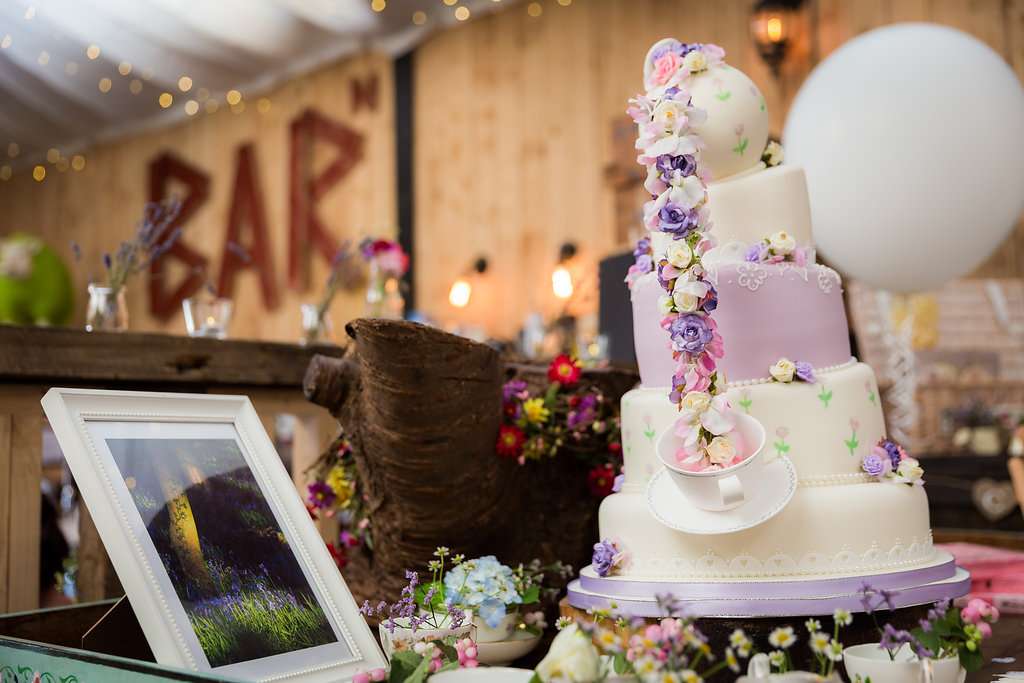 Christie wanted to go for a vintage look for her outfit and chose MayFair Mini by Ian Stuart as her dress. “I fell in love with the polka dots and whilst I did try on other styles of dress, the dress I wore was the first wedding dress I put on. I wish all shopping trips were that easy! Having wide hips and a small waist this dress really complimented my figure which accentuated my natural features. To compliment this look I went for victory curls in my hair. Whilst I love the 1950s era I didn’t want to look like I was in fancy dress and I was made up with the end result.” 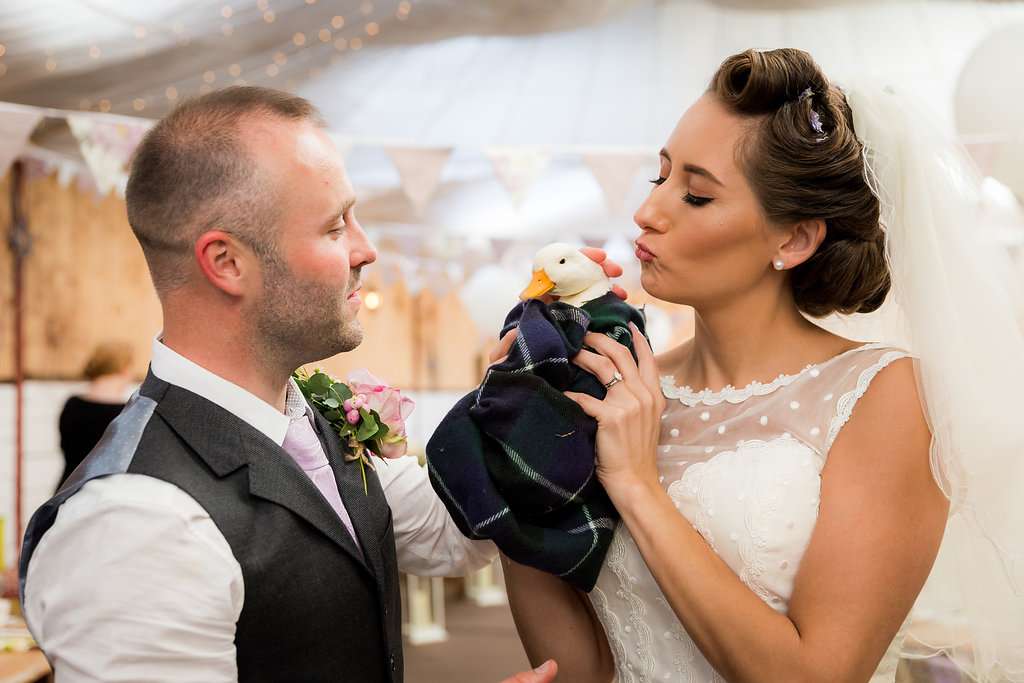 The bride was stressed about it raining on the day, bit in the end everything was perfect. “I was so stressed about the potential of rain due to the outside plans we had. However Steve, our photographer, really reassured me and encouraged me to buy some wellies just in case. I purchased some lilac hunters. We were blessed with glorious weather but what a great idea!”

“We had amazing food, glorious weather, great music and everyone had a great day. I think a wedding day is comparable to a Sunday dinner. It’s a hell a lot of hard work beforehand and then it flies by so fast. Just enjoy it. Take a minute with your other half and appreciate your day together.” 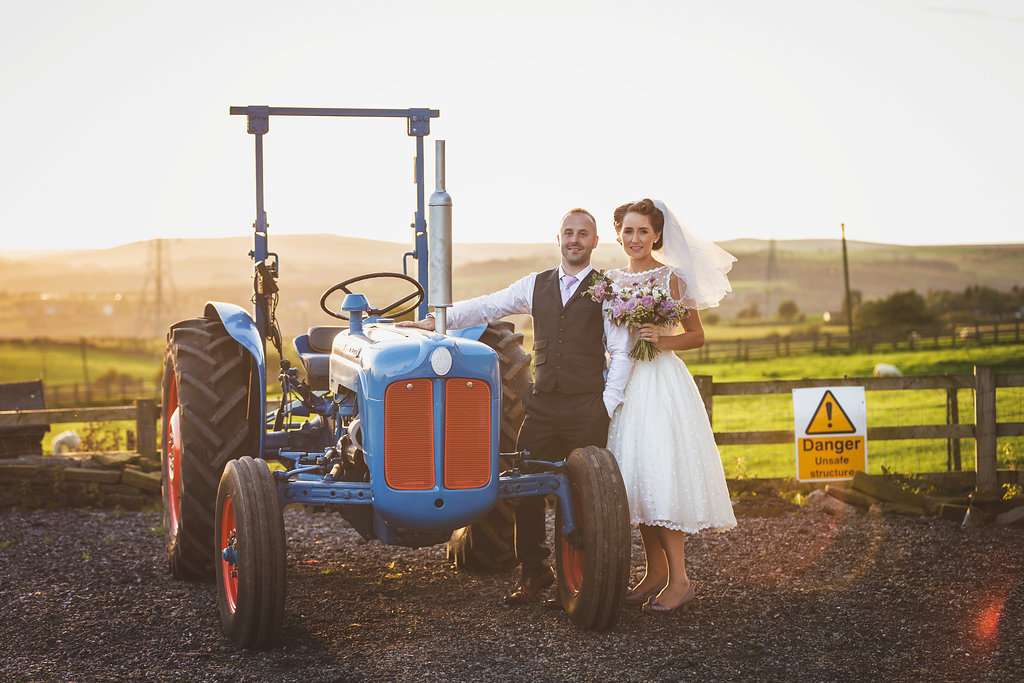 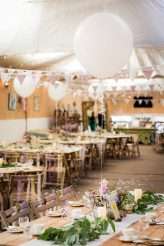 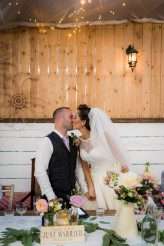 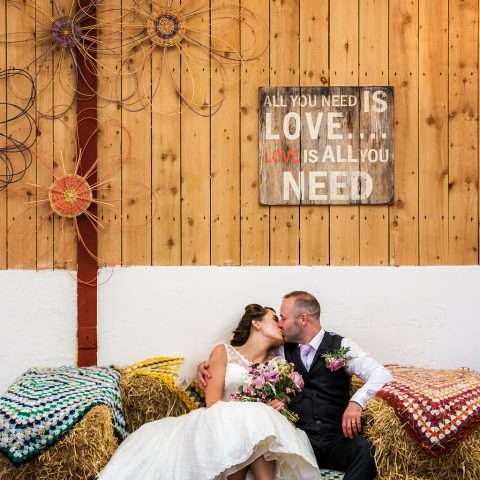