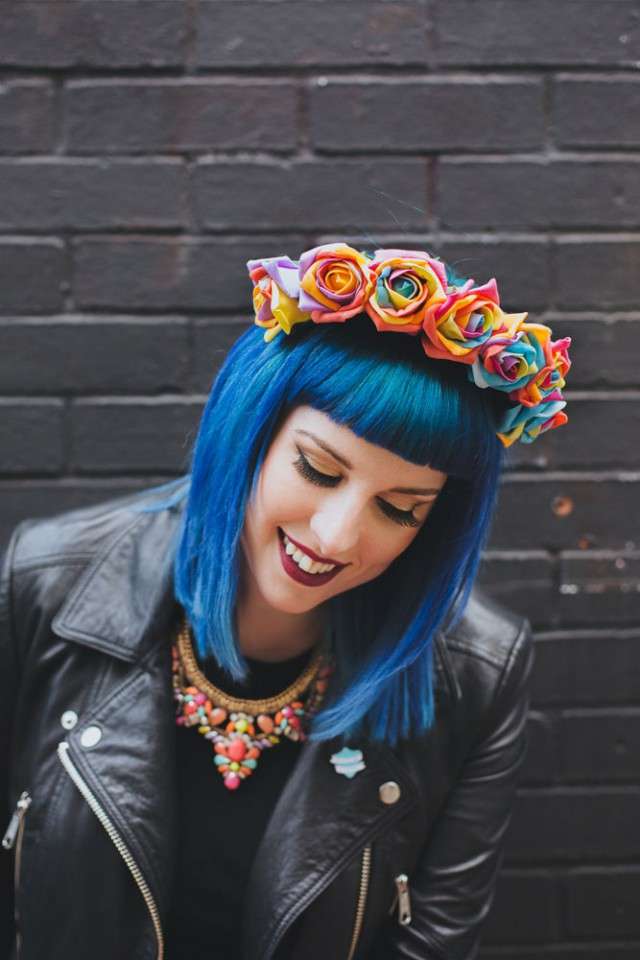 The last twelve months have been HUGE for Rock n Roll Bride. We saw the magazine in physical stores, we worked with (and then ditched!) a external publishing company, and then we started our own! It also saw the last in-person class of The Blogcademy, and we signed up for massively exciting collaboration with the National Wedding Show! PHEW.

My highlight of 2015 was taking Rock n Roll Bride magazine from a small, self-published mag, to one sold in shops up and down the UK. Seeing it in WH Smiths for the first time (when I was on the cover no less!) was a feeling I can’t even describe. I went in with my mum on the first day it came out and she bought, like, 5 copies!

There have been ups and downs on the magazine journey. Most of you will know that in June, after producing three issues with another publishing company at the helm, we decided to break out on our own and start our own limited company to produce the entire thing ourselves again. Going from a team of around nine people to just three was obviously going to take some adjustment, and would mean that my work load tripled, but it was one billion percent the right decision.

Not only did we have complete control again (something I value very much, Rock n Roll Bride is my baby after all!) but having a much smaller team means there would be less overheads, which is super important if you actually want to make money!

In retrospect, the match with the publishing company was not a good one, but it’s not something I regret doing. If we hadn’t worked with them the magazine would have never, ever got into stores. In fact before we signed with them I was ready to pack it all in because I had no idea how to take it to the next level. Although the partnership didn’t work out how we expected, I am extremely grateful for the opportunity they gave us. Its helped our business develop in a direction that we probably would have never got to on our own.

Things have been moving on in leaps and bounds since then. Sales are increasing, the companies who are advertising with us are more in-line with the brand, and we were asked to partner up with the biggest wedding show in the country for next spring! Pretty amazing, considering we still work from home (which I love, #dailysweatpantparty for the win!) and our third team member, design wizard Shauna of We are Branch, is based 5000 miles away in Portland, meaning we do everything via email!

Bigger and better, onwards and upwards! I am so excited to see what happens with the magazine in 2016. I didn’t start this blog to eventually turn it into a print edition, but now that its happened, it just feels SO RIGHT.

On the flip side, although it couldn’t hardly be classed as a ‘failure’ per se, after travelling the world with The Blogcademy for the past three years, over the summer Gala, Shauna and I made the difficult decision to stop doing our in-person classes. It was sad to have to see it end (after all, who doesn’t want to travel the world and get paid for it!?) but each of us had other big commitments, meaning none of us could afford as much time away. When we started the workshop in 2012, all our businesses were in very different places. Now Shauna is running a design studio, I’m editing a magazine and Gala is writing books! It’s so exciting to see how much each of our individual ventures has progressed but inevitably, things had to change to accommodate them.

Letting go of part of your business that you love can be hard, but you have to be smart. You can not do everything, and If there’s something else you want to devote your time to, sometimes you have to make sacrifices, or everything suffers. There is literally no way we could prduce a magazine with 2/3 of our team on the road half the time! This year we went to LA, Vegas, London, Marrakech, Rome, Florence, San Francisco, Florida, and New York. That is a LOT of travel for three girls who have very busy businesses waiting for us back home! The Blogcademy is not completely dead. We still have our online course, and maybe at some point we’ll be able to offer a new in-person class, but for now it’s not our priority.

So what was my biggest lesson of the year? Goodness, there have been so many but I think being as objective as possible and trying not to get swept up in the hype when opportunities that seem too good to be true (because they usually are!) come your way. It’s vital to think very carefully (weighing up all the pros, cons, and possible positive and negative outcomes) before you sign on any dotted lines.

Also things not working out as you expect does not always have to be a bad thing. Sometimes the reason something isn’t gelling is because there’s a different path that will be much better for you in the long run. It can be scary to make those changes, and you’ll probably cry and be stressed out of your mind for a little while, but in the end it will totally be worth it. Sounds cheesy but oh-my-god it’s so true.

2016 is just around the corner and I could not be more excited about it. Not only is my new veil collection with Crown and Glory launching on the 4th, but there’s The National Wedding Show partnership in February and early March. I’ll also be revealing another really exciting partnership in a few months time (here’s a hint) too!

The January/February issue of the magazine went to print last week so I’ll be eagerly awaiting the delivery of the new copies in the new year as well. We will be starting to take pre-orders (and accepting new subscribers) on December 26th and it’ll be available in shops on January 7th.

Oh, and on a personal note, Gareth and I are taking a second honeymoon to Japan in March. I am SO EXCITED I can’t even tell you. We went to Toyko for our actual honeymoon in 2008 and this time we’re doing Tokyo – Kyoto – Hiroshima. I’ve been furiously booking hotels and planning our days so we can pack as much Japanese goodness in as possible. Its going to be the trip of a lifetime and if you have any tips or must-sees I’d love to hear them.