Jody always wanted a steampunk themed wedding, but their theme really came to life when they booked their venue. It came complete with a funfair! “When it came to planning our wedding there were very few surprises for anyone who knew us”, Jody began. “I have never been one for anything traditional and after 12 years of catering weddings James did not want anything traditional either.”

“Our starting point was to find a venue so I listed every wedding venue in Shropshire, Cheshire and North Wales and started crossing them off if they did not fit our criteria of size, budget and quirkiness. We ended up with six venues that were slightly unusual and visited them all. The last one (which was my secretly favourite) was The Ironbridge Gorge Museums. They had so many choices of areas and rooms that we could use for the ceremony and for the reception. We went for The Covered Bays for the ceremony and wedding breakfast, and Blists Hill Victorian Town for the reception. The fact the latter has a fairground sealed the deal for James!” 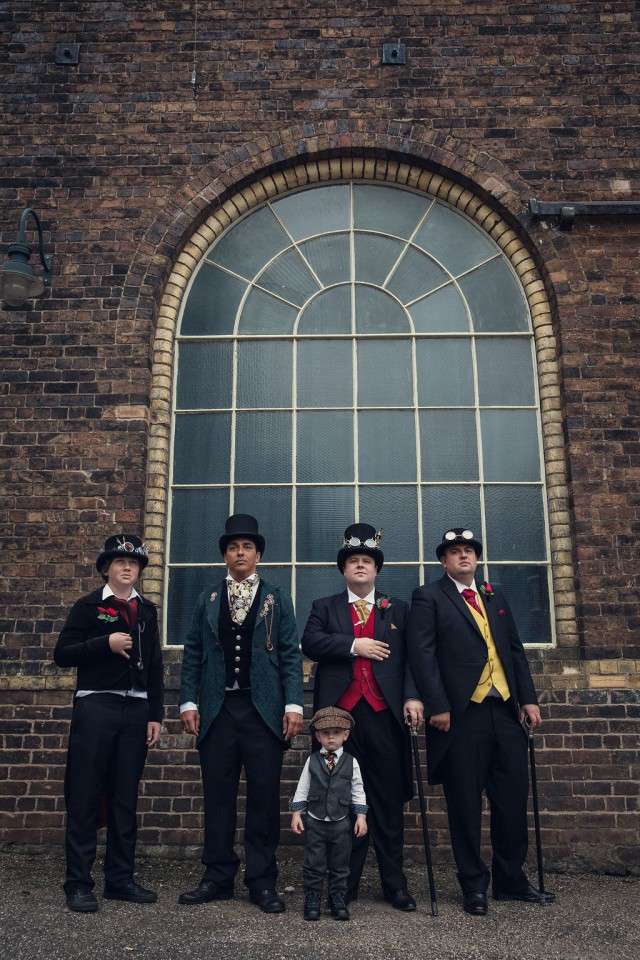 “For me it was a no-brainer to have a Steampunk themed wedding,” she continued. “I am a huge fan of steampunk and a complete science fiction nerd, and we both love museums, so the idea of having a steampunk themed wedding at the home of the Industrial Revolution made me just a little bit excited! We actively encouraged all our guests to dress up and extended the dress code to cover Victorian and gothic for those who weren’t comfortable with going full steampunk. We also built up a list of people and companies providing costume hire, hat making and dress making services to pass on to everyone and links to websites for inspiration.” 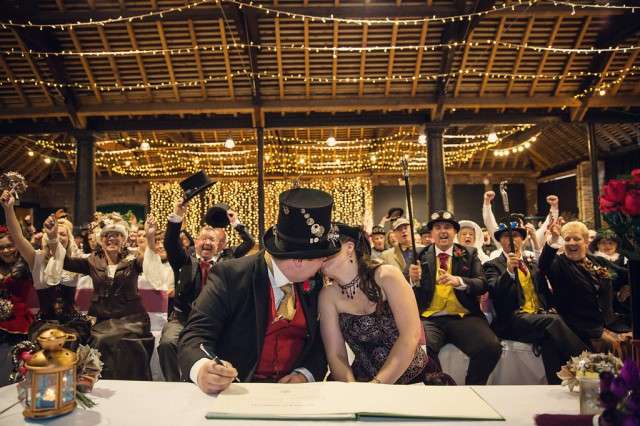 Jody wore a dress from Maureen Myring Kesterton, her shoes were from Evans but she customised them herself. “There were a number of stories of fate playing a hand in the run up to the wedding”, she explained. “The big one was with my dress. I had no idea what I wanted to wear and I spent months looking for ideas and dressmakers that I liked but with no luck. During this time I did see the dream dress but it was four times over my budget so I looked at it longingly and then tried to forget all about it. Obviously I was not going to have a traditional dress so most of the shops my other engaged friends were visiting were out of the picture. But in order to please two mothers who desperately wanted the wedding dress shopping experience, we went to visit a store that was having a sale. After a few hours of laughing at me trying on ridiculous dresses (well, they were on me) and a few ‘aaawww’ moments we came across THE DRESS hanging up in the full priced section and it took me no time at all to agree to try it on. The sample was in my size and as fate would have it the assistant said that the dress was no longer being made and that it was going to be put in the sale as well and so it ended up being slap bang on my budget limit!” 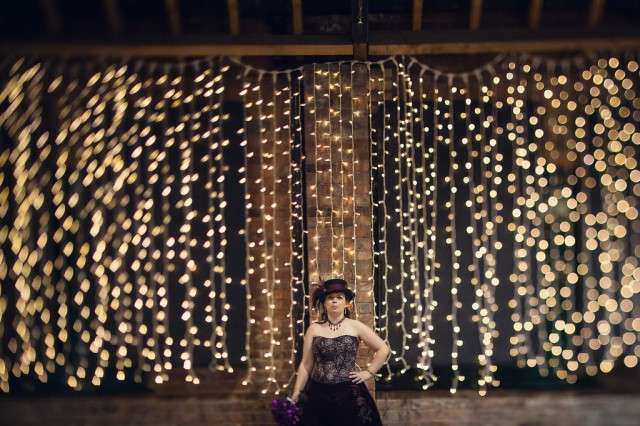 “Our wedding was by no means a budget wedding (we spent around £13,500) and in the run up we did get a few concerns from family members on the money we were spending”, she said. “We originally wanted a small budget wedding but once we had found our venue and knew what we wanted to do, it became obvious that we would have to ‘go big’ to make everything work. However one of our best savings was actually the venue itself. We were completely stunned by the price compared to most other wedding venues! Yes, there was the chance you would be seen by the general public, but we actually loved that! This did come tied in with our biggest expense though which was the catering. James is a chef so he had a very strong vision of what he wanted for our wedding breakfast and evening buffet!” 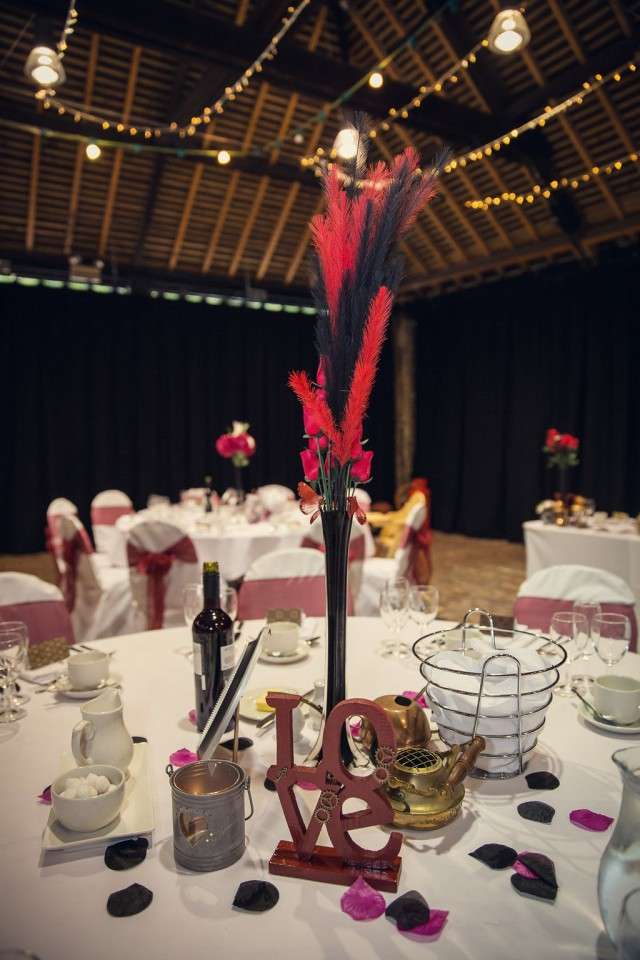 Jody also did quite a lot of DIY, mostly for the reception décor. “When I first started researching it became apparent that it would work out cheaper to buy or make decorations rather than hiring them”, she said. ” This did mean that part of the house was swamped in boxes for months and it can add another stress to the planning, but I am a crafty person anyway so it was just another project to keep me busy. I made the Save The Dates and the invitations, and hundreds of paper flowers for the bouquets and table decorations. I repainted loads of picture frames for the table numbers, and decorated ‘Love’ signs for the table centrepieces with cogs and keys. I also assembled my hat by attaching tulle to it for a veil, adding an ostrich feather and a few steampunk badges and feather hair clips.” 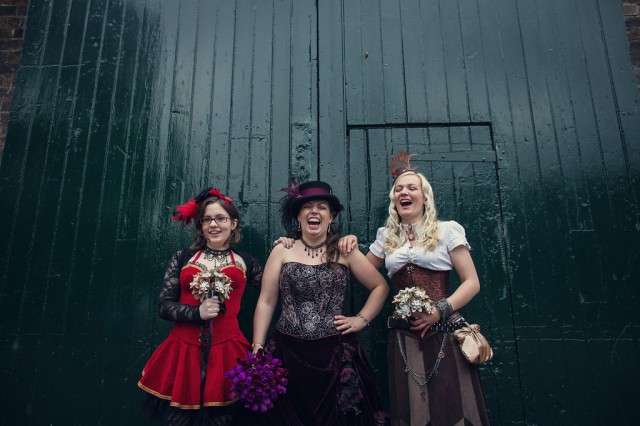 The couple also saved the pennies by not having any real flowers. “We decided very early on that we would not be having real flowers as I come from a family of hayfever sufferers and the last thing I wanted was make up down my face. All the flowers were silk, wood and paper, and they were bought from shop sales, discount shops, markets and charity shops. The wooden roses were a particular favourite as they looked great and cost next to nothing!” 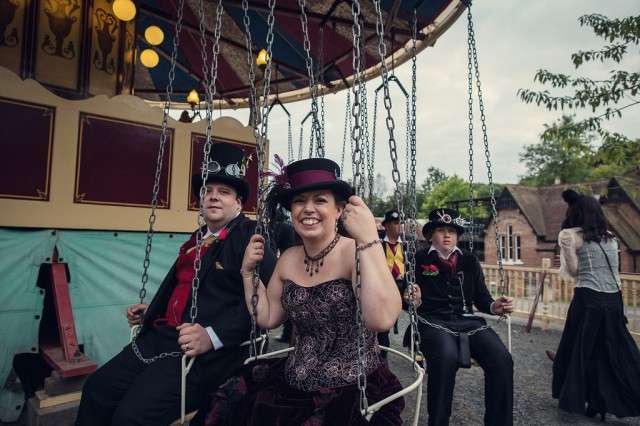 “I can’t provide any advice that you have probably not already heard”, Jody concluded. “Make it about you and what you like, but do make the most of every second. Our day was 18 hours long and it was still not enough time! We were shattered but we still wanted more time to talk to people, more time to dance, more time to drink, more time to eat! And make sure you capture all of it on camera! You should totally book Sassy as your photographer too. She’s awesome.” 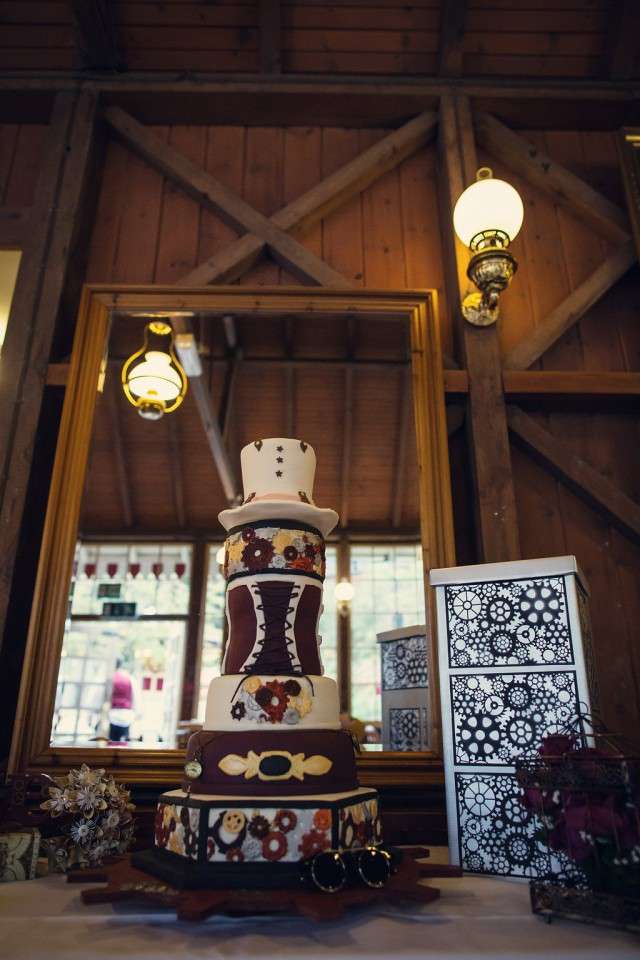 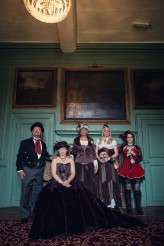 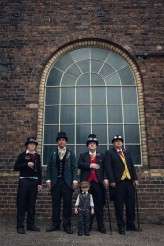 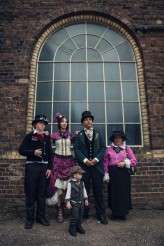 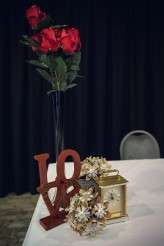 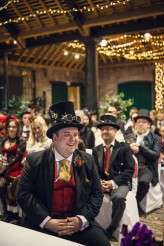 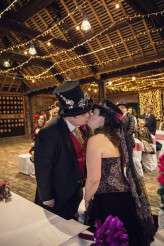 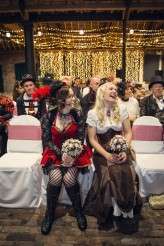 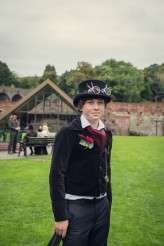 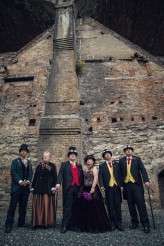 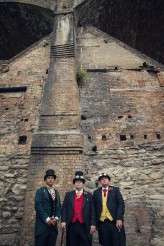 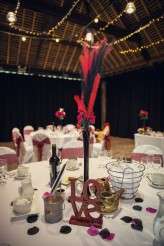 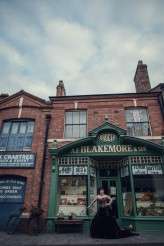 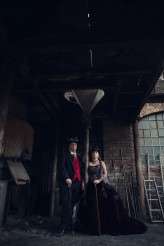 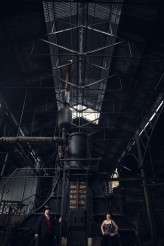 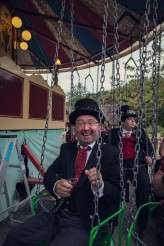 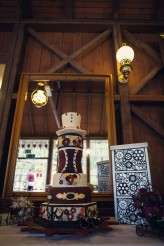 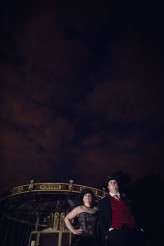