The amazingly quirky Chop and Hales held their wedding reception in the bride’s parent’s back garden. They hired a marquee and decorated it exactly as they wanted. Hales looked ever the perfect Rock n Roll bride with her Mori Lee dress, Iron Fist shoes and Butler and WIlson skull necklace. Her bridesmaid’s wore different coloured Vivien of Holloway dresses. I mean, how amazing do they all look?! 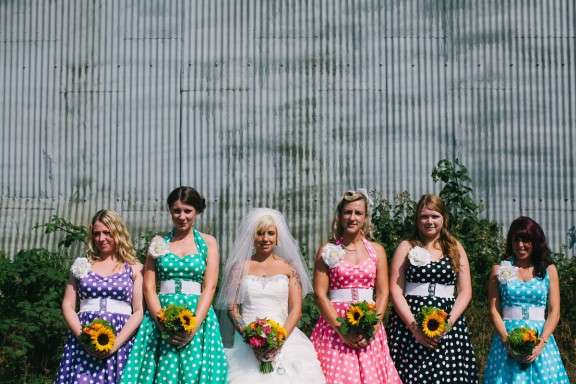 “Our wedding was just like a sweetie shop… but one that sells liquor and cigarettes and plays heavy metal”, began the bride. “I wanted it to look a bit like a kid’s party to encourage everyone to stop acting like grown ups. Not that any of us needed much encouragement!” 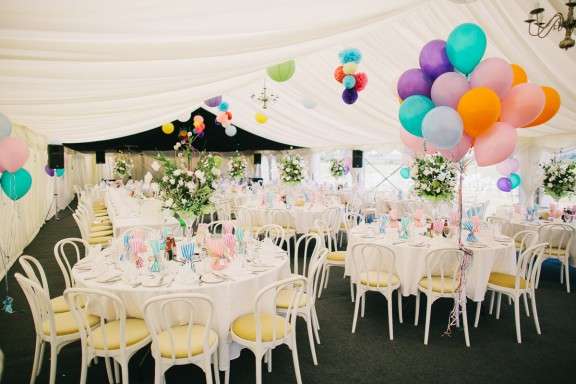 “I love how relaxed our wedding was and how much fun it was which was exactly what we wanted. We had music playing all through the drinks and dinner, people dancing barefoot in the field and blokes with their shirts off playing football. Everyone just did their own thing and had a blast.” 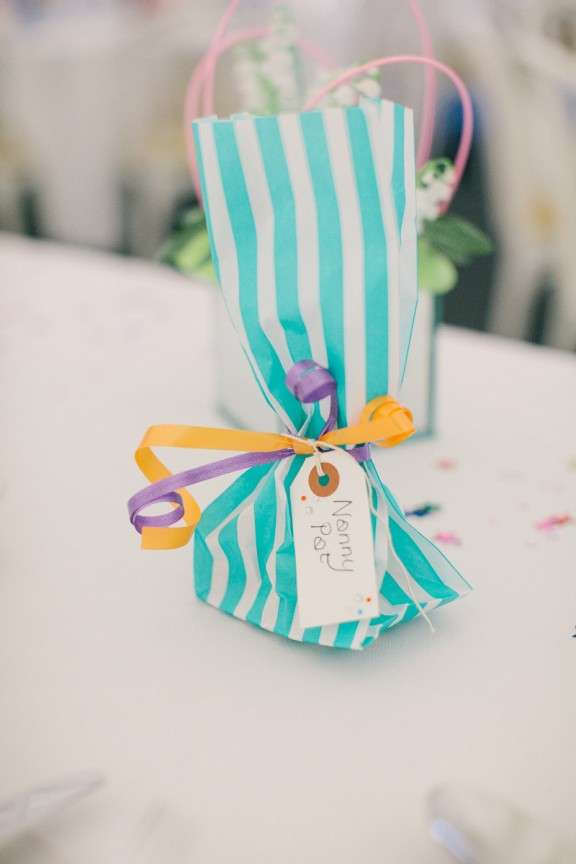 “In terms of the styling took inspiration from some of my tattoos”, she continued. “I had my cake made up with flowers that matched the ones in my sleeve and the candy colours and cupcakes were also inspired by my sleeve. The inspiration for the day was really just to get everyone to have an awesome time. No rules, as few things set in stone as possible.” 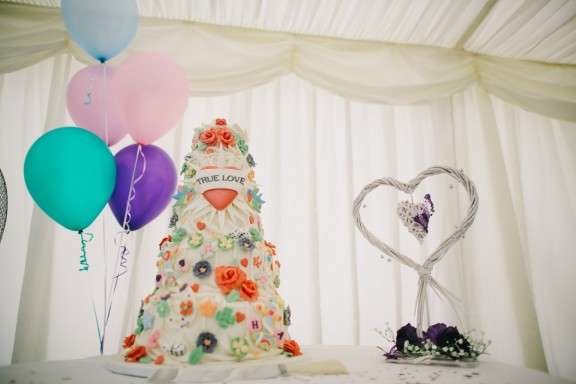 “The food was really informal, served by waiters in Elvis sunglasses. It was super colourful and bright which a lot of people said they hadn’t seen before. I see so many weddings that are colour coordinated or pastel coloured or muted and that’s fine and lovely but I wanted wanted it to be as bright and cheerful as possible.. I just wanted everyone to have fun and feel like they could be silly. And they were silly. So it worked.” 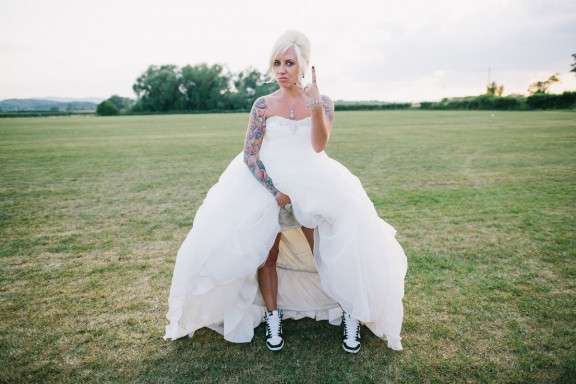 “I do have a funny story for you though”, she concluded. “When Chop was looking to propose to me, he emailed Kat from Rock n Roll Bride to ask for suggestions about unusual engagement rings. She replied and suggested Etsy and tha’ts where he found the jeweller that made my killer ring. So thanks Kat. This is all your fault!”. 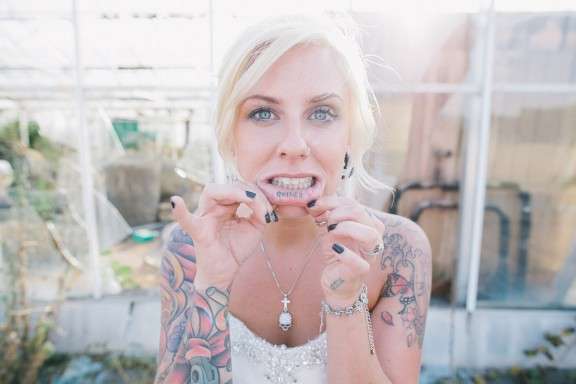 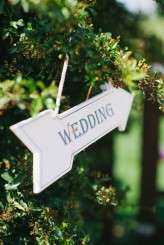 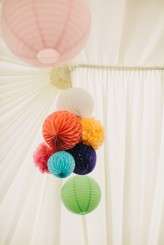 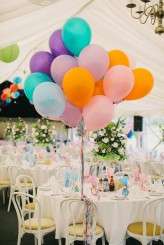 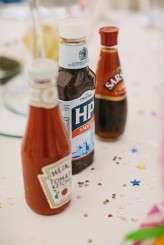 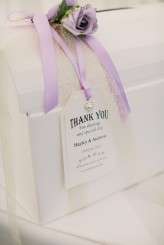 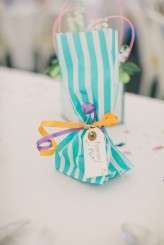 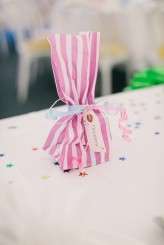 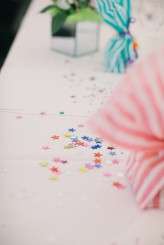 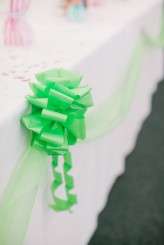 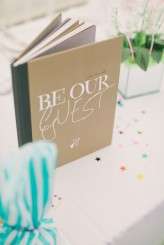 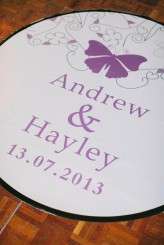 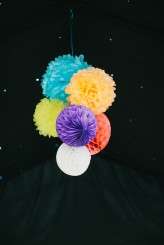 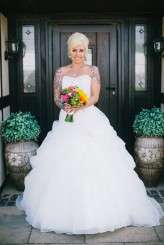 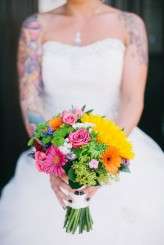 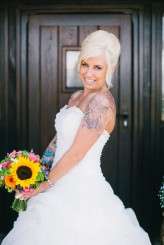 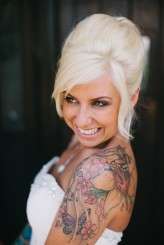 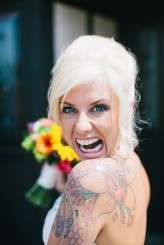 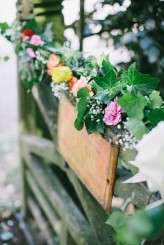 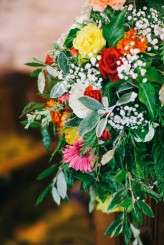 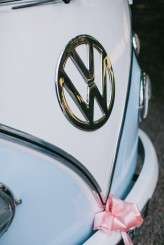 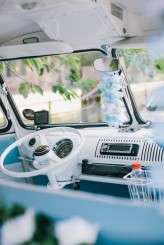 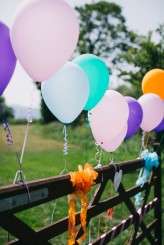 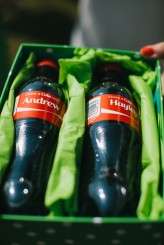