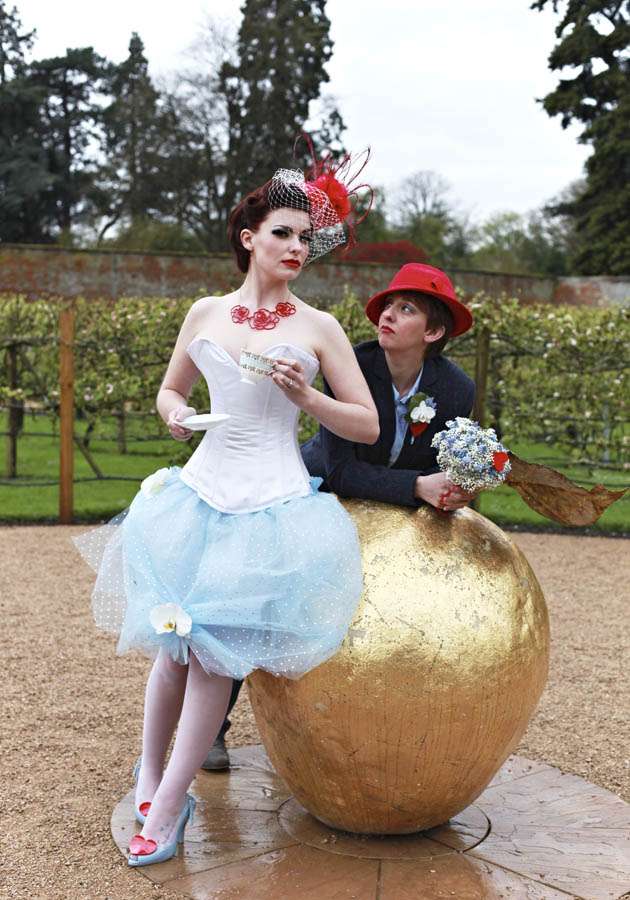 I’m sure you won’t have failed to notice that there’s a little sporting event going on in London at the moment. Now while I’ve genuinely surprised myself with how much I’ve been enjoying it (the opening ceremony was amazing and I’m now well versed in the art of synchronized diving) I can’t help but shudder when yet another red, white and blue or Olympic themed bridal shoot (really, come on really, is that the most unique idea flying about at the moment?!) lands in my inbox.

However when I saw this shoot, admittedly not purposely patrtiotically themed, came my way I was excited… and it wasn’t at all because it made me feel invigorated about ‘going for gold’ (the cliches flying around blogland are also doing my head in – anyone else?!) Stylist Rebecca of Pretty Little Trio told me all about it. 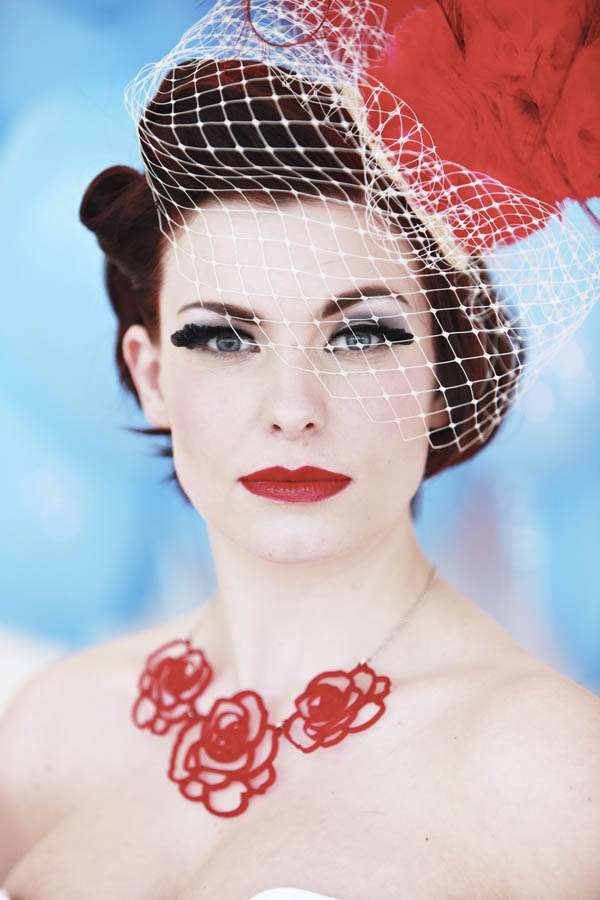 “The inspiration for Naomi & Nicky’s shoot was burlesque, blues, whites and reds, vintage china, cakes, tutus and frilly lace knicker cakes! Basically we wanted a burlesque-esque, bridal vintage tea party with a flashes of red. The inspiration evolved over time and adapted to what the British weather threw at us on the day. Photographer Adam and I have wanted to work on a shoot together at Combermere Abbey for a while. We both love the place, it’s incredibly naturally beautiful. So I came up with the idea to do the shoot in and around the bluebell woods, with a quirky burlesque influence.” 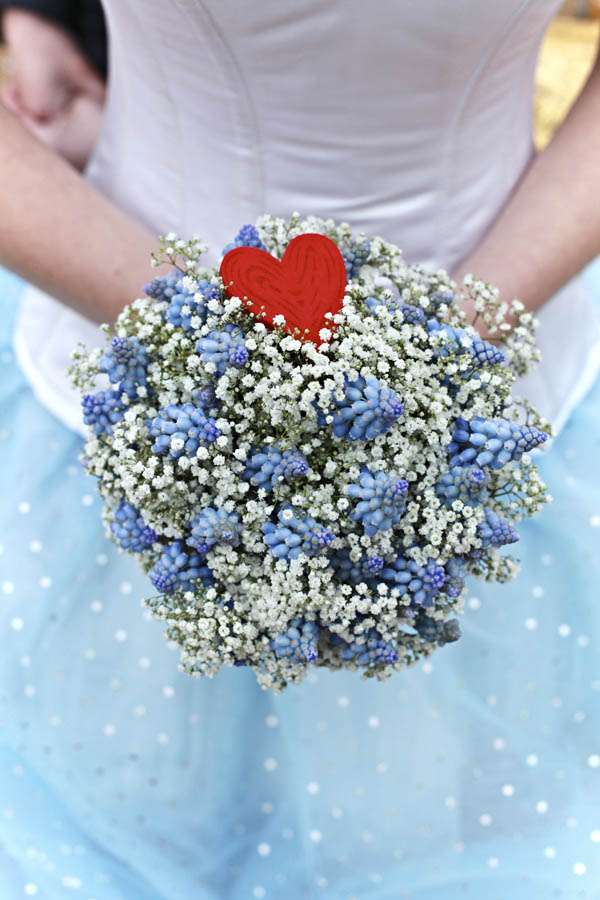 Now that’s the kind of patriotism I can really get behind. Thank you Naomi, Nicky, Rebecca, Adam (and the whole team – credited below!) for sharing these with us today. 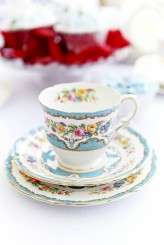 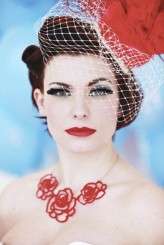 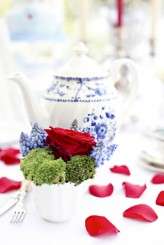 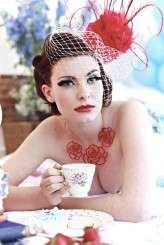 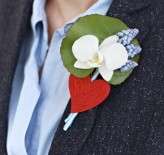 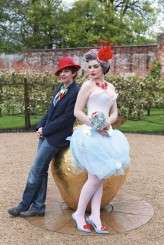 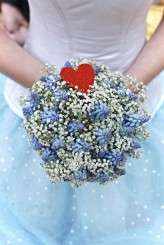 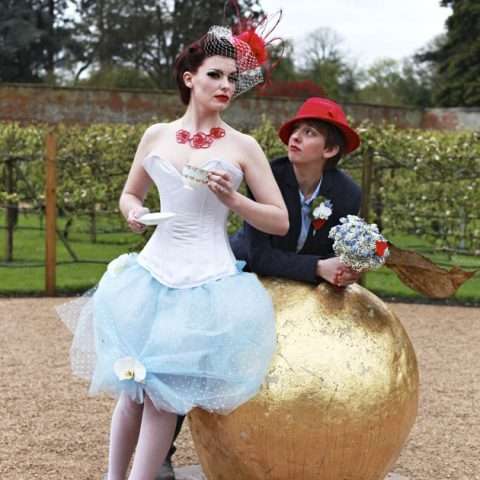 With Summer just around the corner, what could be a better shoot to share with you than this gorgeous secret garden shoot? Using antique and vintage piece from Henry Nicholls Antiques in Worthing, the styling had a timeless but quirky feel. Photographer Jayne Sacco told me all about their inspiration, "Anna owns Henry Nicholls Antiques alongside her husband Henry, and her style is all about being individual. She sources a mixture of vintage and retro goods for the store, as well as carefully selected costume jewellery like the Ritzy Crystal jewellery featured in the shoot. Henry has appeared in a number of Antique TV shows from Trash to Cash, Secret Dealers and is a regular antique dealer on ITV Dickson's Real Deal."

I am a nail art FIEND so I was thrilled when this gorgeous autumnal styled shoot was sent over to me by photographer Becky Mitchell. Alongside nail artist Nancy loves Nails, who wanted to showcase some newest Autumn/winter inspired nail designs, the idea was to share some unique Fall wedding styling ideas. The shoot was set up in an abandoned building which really helped to set the tone of the vignette as a whole.

What could be more British than fish n chips? It's one of my favourite things and an absolute must when visiting a seaside town or hanging around London's east end! Claire & Martin's shoot took place at Poppies of Spitalfields. "The idea behind this shoot was a vintage, very structured and posed shoot," photographer Georgina told me. "I wanted them to resemble the old commercials that were made in the 40s & 50s, which would feature a nuclear family or a young happy couple enjoying the product advertised."

With the day of hearts, flowers and lurrrve fast approaching, I have been inundated with Valentine's themed submissions, however this retro/pin up shoot from Jen Will may well be one of my utter favourites. The shoot took place in her own kitchen which was the perfect setting for the baking theme. "This is part of the reason I love my apartment." Jen tells us "It is the coolest apartment ever, and my love for it is part of the reason I have yet to join the adult world of home ownership. It has a bathroom that would probably rent out as a large bedroom in New York City and a classic stove that came straight from the original Be Witched TV show. No matter where I live in the future, I will always love this place. I am so glad I got to document it in such a special way!" I have to agree... and seeing these really makes me want to get my arse in gear and decorate our house! Thanks to Jen for sharing these.

Everyone loves sweeties right? Well Rock n Roll Bride favourite (and provider of the sweetie table at the Rock n Roll Party in April...eeek!) Hannah of Sweet Dream Events sent over this vintage-inspired shoot she was a part of. The idea for the shoot was to promote a new bridal show she is involved in...and from the look of these images, the show is sure to be a good one. "This is what happens when a group of talented women get together to create a wedding fayre with a difference," Hannah told me. "Hannah (Sweet Dream Events), Carrie (Carrie Bugg Photography) and Natalie (Exquisite Bridal) met when they decided that the personal touch was severely lacking in the wedding industry in their area. And so, The Luxury Wedding Showcase was born. This shoot was to give those wishing to attend an insight into all their talents."