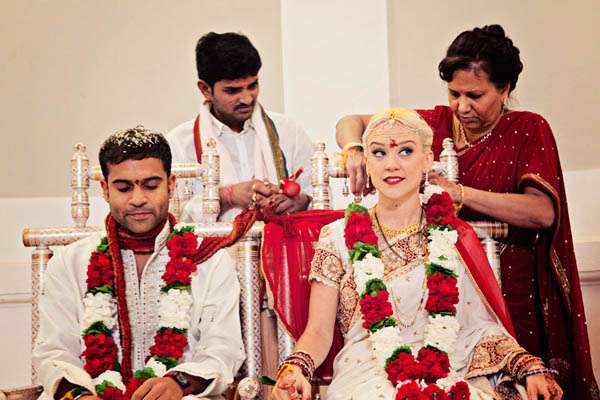 This afternoon’s wedding is being split into two parts. I’m not usually a huge fan of the two-parter, but there’s just so much going on in Lucy & Vish’s  weekend-long wedding I did’t want anything to get overlooked! On Friday 28th October they had a Hindu wedding ceremony and reception, and then the following day, they had a catholic ceremony and another reception! First up, the Friday…

The day started with a ceremony at St Peter’s Hall, Manchester. “We always knew we would have a wedding of 2 parts as we wanted to honour both of our cultures and religions,” Lucy told me, “so we chose to have a traditional Hindu Blessing on the Friday followed by a Church wedding on the Saturday, an epic 2-day wedding!” 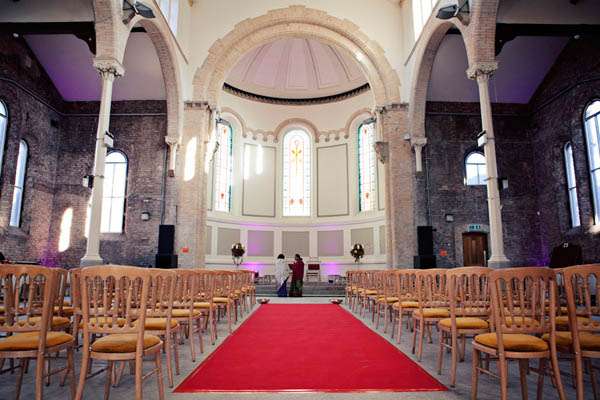 “The first problem we came up against was finding a venue that could cater for both an Indian wedding and a big party! We needed a space to hold the Indian ceremony and reception, which would let us bring in our own Indian caterers, there are very few places that actually offer this and the ones that did were very traditional, very expensive, Stately homes or big hotels and definitely not the sort of place we had in mind for our wedding! Initially I started looking at marquees, but again, this was a very expensive option and we had the small problem of no land to pitch a marquee! This led me to go down the route of more alternative venues such as village halls, theatres etc, which is how I came across St Peter’s Hall, a former church in the Ancoats area of Manchester City Centre which has recently undergone a huge restoration project by the North West Development Agency. We live in London but decided to get married up North as it was close to both our families, it was just by chance that we found this venue and we liked the idea of an urban city centre wedding as we are a city girl and boy at heart!” 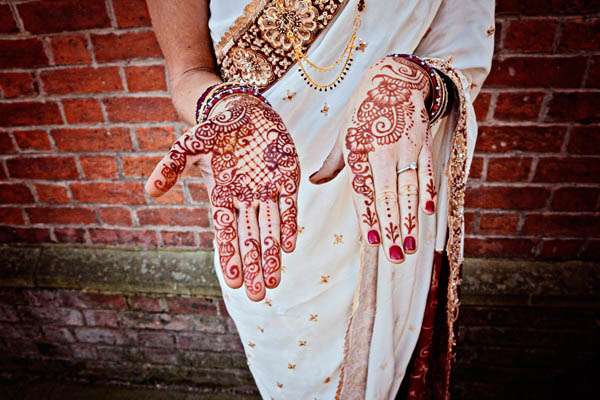 “As soon as we stepped foot in St Peter’s, we both knew it was perfect for our wedding, we instantly fell in love with the space. Inside was still unfinished so it was a little rough around the edges, but we liked the contrast of the unfinished warehouse feel with the beautiful church interior and stained glass windows. It also had an east-facing altar, which was perfect for the Indian ceremony to be performed! In our eyes it really was the perfect venue, but sadly our dreams were almost shattered when we discovered that the building was not going to remain empty for long and that the new tenants were unlikely to be in a position to hire out the space when they moved in at the start of November.” 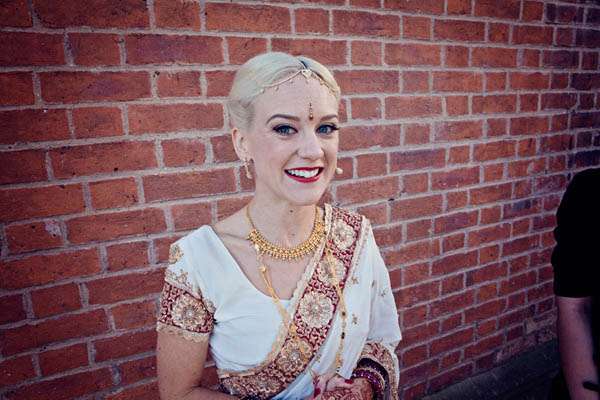 “The only option was to get married before the new tenants moved in, but this was at the start of May so it didn’t exactly give us a huge amount of time! Could we realistically organise a 2-day wedding in less than 6 months? Everyone thought we were mad, but we decided to just go for it, we have been together for 10 years so we figured that we didn’t need a long drawn-out engagement!  We chose the latest possible date in October which luckily also coincided with Diwali (Indian New Year) which also meant it was a good/auspicious time for a new marriage to take place!” 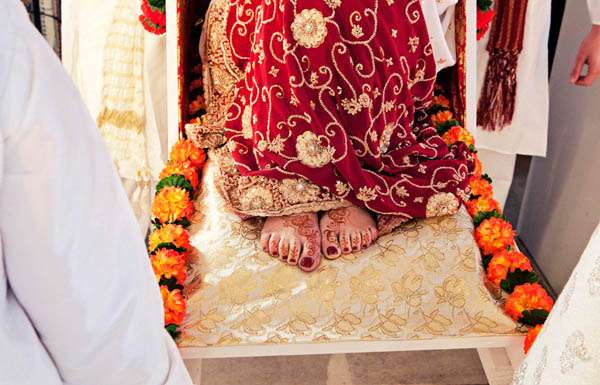 For the Indian wedding Lucy wore a traditional sari which was a gift from Vish’s parents, “The Indian tradition is that the groom’s family buy the bride’s outfit and the bride’s family buy the groom’s. Vish’s Mum and sister went on a mammoth shopping spree in India to buy all the wedding saris and outfits. Thankfully they have great taste and came back with the most beautiful outfits, I felt like a Bollywood princess, especially when I was carried down the aisle.” 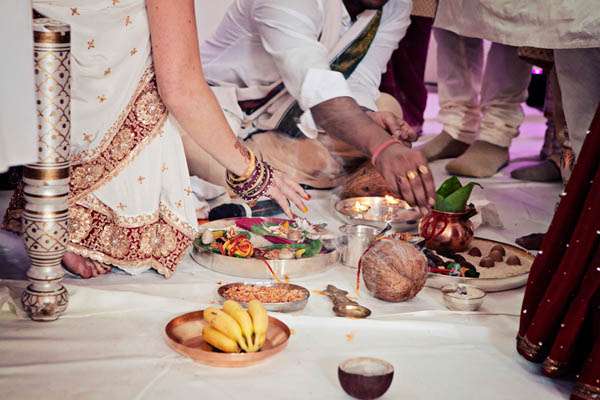 “I was carried into the ceremony on a traditional wedding Doli by my Uncles, my Brother and my Best Man. We actually had this made by Kirti (Vish’s sister’s) builder, Kirti and I decorated it with Indian material and flower garlands. You can’t tell from the photo’s but I was absolutely terrified that they were going to drop me, Thankfully they did me proud and got me to the altar in one piece!” 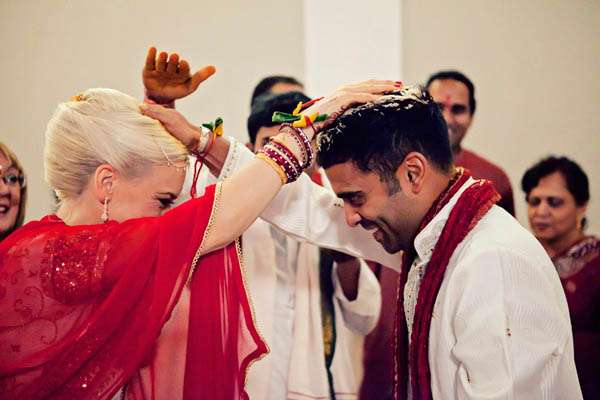 “As the wedding was held during Diwali the Indian festival of light, we decided that the theme should be a celebration of Love & Light,” the bride concluded. “This actually worked well as both the ceremonies involved elements of light, from taking 7 sacred steps around the wedding fire to the catholic candle ceremony. To keep with the theme we filled the venue with candles, we had tea-lights in jam jars on all the tables and gave personalised candles from mdb weddings and events on Etsy to guests.  We also released fire-lanterns and ended the Friday night with a firework display – a Diwali and Indian wedding tradition.” 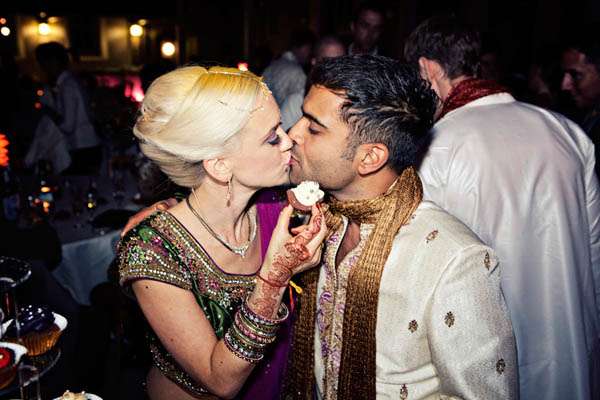 Isn’t it all so beautiful!? Thank you to Lucy & Vish and their photographer Andrew for sharing these with us today. Pop back at 3pm for part two, the catholic ceremony and second reception! 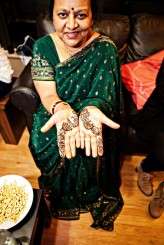 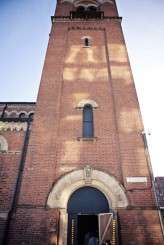 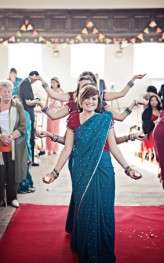 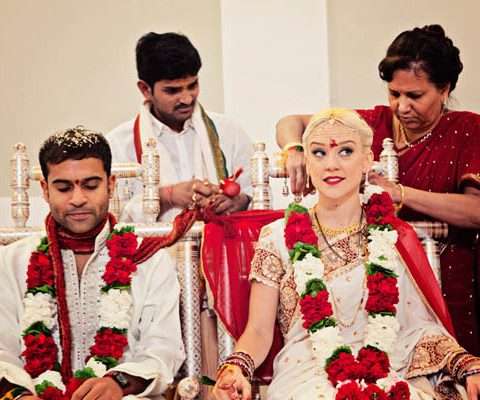 Back in February 2011 I was at exhibiting at the first Designer Vintage Bridal Show, Birmingham. Luckily for me the organisers plonked my stand right next to one of my ultimate besties, wedding photographer Emma Case. On the second day of the show in walked bride-to-be Aneesha, who had decided she wanted Emma to capture her 2012 wedding. After chatting about wedding planning, blogging and photography Annesha went upstairs to try on wedding dresses. Always one to get excited about this part of wedding planning Emma & I followed to see what the bride-to-be would pick. Aneesha & Ed were having a traditional Indian ceremony in the morning, but for the evening reception they wanted to change into western wedding attire. As soon as Aneesha tried on the slinky Yevonde by Jenny Packham the tears started to fall and we all knew it was the dress for her! I'm honoured that I was allowed to witness this experience and I'm even more thrilled that today I get to share their full wedding story with you.

After the festivities of their Hindu ceremony, Lucy & Vish woke up on the Saturday morning ready to do it all again - this time in a Catholic church. The ceremony was held at St Patrick's RC Church, Manchester, with the reception that followed back at St Peter's Hall. Their Catholic wedding has very British influences - from high tea to xx. Lucy wore a vintage wedding dress from Elizabeth Avey. "I knew I wanted a vintage Betty Draper-esque dress, as the 50s is my style era! Elizabeth's was my first stop, which was ideal as it was only up the road from where I live in Kentish Town. Although I didn't find the dress straight away, Elizabeth knew exactly what I wanted and told me to return in a few weeks as she was due to get in more pieces. I'm so glad I went back as when I returned she pulled out THE dress, which was an original 50s number, fresh from LA! Although she needed a clean she was in pristine condition for her 60 years! It was originally a drop waist dress but the lovely ladies at Designer Alterations raised the waist to make it m

Katy-Jane and Alex met when they were 13 years old. Each other's first loves, they split after just a few months together but remained friends. Then in 2009 they finally got back together and married seven years later. The day was hosted at the Rosliston Forestry Centre in Swadlincote and had an Indian style theme. The general vibe they wanted was relaxed and fun.