Tam & Rob had a wedding in three parts. Firstly a ceremony at Michelham Priory, East Sussex. “Michelham Priory is gorgeous”, began the bride. “We got married in a beautiful medieval barn.” Their reception was then held at Hawthbush Farm. They set up a marquee for an afternoon tea and then used the barn for a festival style party late into the night! “The farm is absolutely stunning. We felt very lucky when we found it. We had looked for a wedding venue for about 6 months and found it really hard to find somewhere that would let us do our own catering and didn’t charge ridiculous corkage. We also really wanted somewhere that our friends could camp. Hawthbush Farm is such a beautiful place and Toby and Lisa who own it are brilliant hosts. We stayed in the Cowshed and Piggery on the farm for a week before the wedding with loads of friends which was great fun. Lots of late nights preparing and making quite a big dent in the wedding wine!”

“We really wanted a fun wedding which guests would enjoy”, Tam continued. “Rob & I decided we would split the day into three, so we had the ceremony, the afternoon tea with games then an evening party. I think having three different venues with lots of entertainment was fun for the guests and us!” 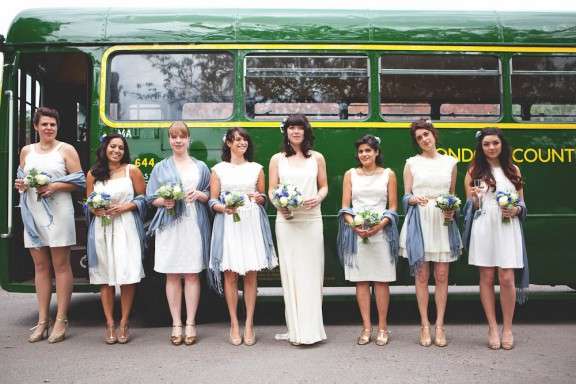 After the ceremony, the couple actually had a second one – a traditional Indian wedding ceremony. “My dad is Indian so after the wedding ceremony everyone had a glass of Pimms and then gathered round for a traditional Parsee ceremony called a ‘Mado Soro’. The ceremony is a blessing for the couple to wish them good fertility and a fruitful marriage. My dad explained what was going on to all the guests and what the ceremony meant. We were presented with the most amazing fresh flower garlands that my cousins had bought over from Thailand. A fruit tree was planted by my brother while prayers were said by other relatives. An egg was passed round Rob’s head three times then thrown to the ground and broken. A coconut was then smashed on the floor. Everyone then threw rice and confetti.” 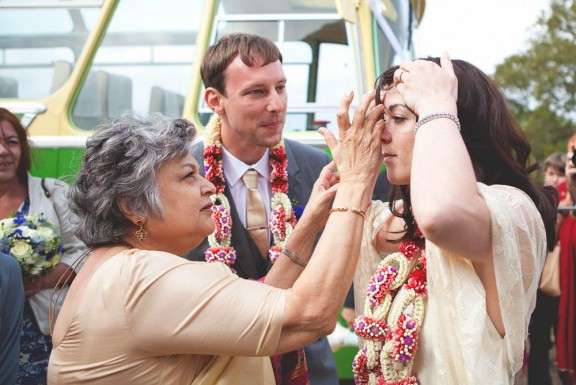 For their reception, the lucky couple had many talented friends that they could call upon to help them including the catering and the entertainment. The fact that they had a few different performers added to the festival vibe.”The catering was done by lots of friends”, the bride continued. “Our amazing friends made the salads and other food which accompanied the hog roast for the evening buffet. Our friend Niki who is a cheese connoisseur brought the most amazing cheese board. Rob’s mum made delicious chutney.”

“We made cider for the evening which spent months in barrels in our bathroom fermenting and stinking. We also made loads of sloe gin which we made into a delicious cocktail. We really overbought the alcohol, we still have dozens of bottles of wine left. But I am very happy that all the cider and sloe gin was drunk.” 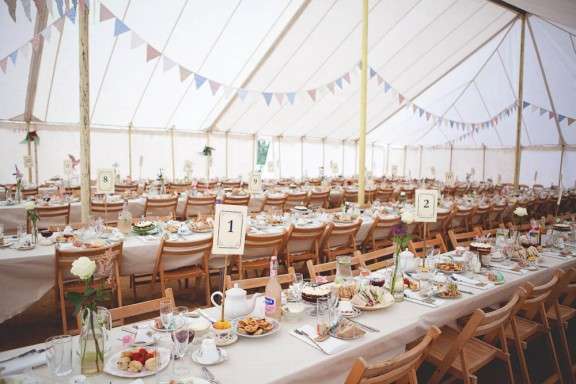 “The bands that played were amazing”, Tam continued. “Firstly an amazing wedding band called the Fat 45s, really good friends of ours. They are an 11 piece jump jive big band and everyone, of all ages, loved dancing to them. As a surprise we got them to learn ‘Dreadlock Holiday’ by 10cc which is the favourite song of a very good friend called Malcolm. He loves karaoke so instead of a first dance we asked Malcolm to come to the stage and sing the song. He was very surprised and very happy to oblige. It got everyone dancing and laughing.”

“We have 4 friends who started a barbershop quartet years ago. They hadn’t sung together for a while but amazingly performed 4 songs at our wedding. They did this in the marquee after the afternoon tea and speeches. It was brilliant.” 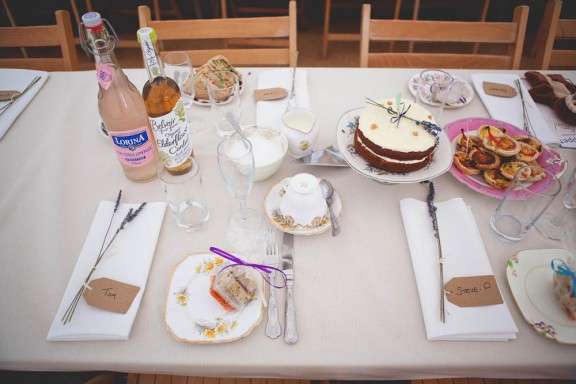 The majority of the reception decor was DIY. “The buildings at Hawthbush Farm are so beautiful that they really didn’t need a lot of decorating”, Tam explained. “We hired a traditional canvas marquee for the afternoon tea. For the evening reception there was a brilliant old army tent where we had the buffet and set up a bar. It was really cosy. There was also a barn where the band played. There was a tractor next to the barn which we decorated with coloured lights.”

“We spent a year collecting vintage tea sets. We had 150 guests so managed to collect 150 tea sets, cake stands, bowls etc. Lots of car-booting! My amazing mum made 100 meters of bunting which we used to decorate the afternoon tea marquee and the barn. We had an amazing team of friend helpers who spent a week on the farm helping us prepare before the wedding. We made 50 huge paper windmills from wallpaper samples. We bought the flowers for the tables and reception venue form a wholesaler and arranged them with the help of friends which was a very late night, 2 days before.” 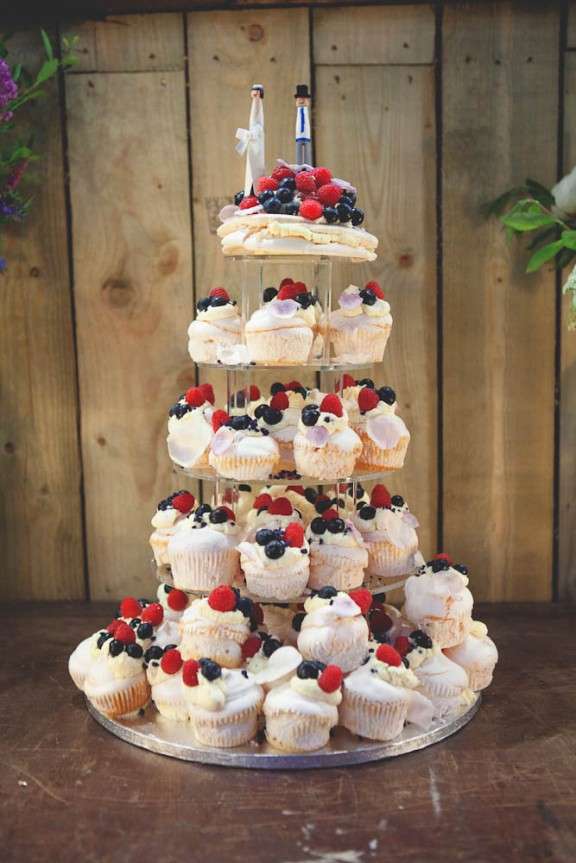 “We spent ages trying to think of good favours for our guests. We finally decided after much deliberation to give all of the adults Indian sweets (as I am half Indian). Some of our poor friends spent a whole night putting sweets onto tiny plastic bags the week before the wedding. The kids got bubble guns, sweets and various other toys including fake moustaches which lots of grown ups enjoyed wearing.”

“Our friends Rob and Ezra made us beautiful wooden signs that went all over the farm. They also made the games. We had a coconut shy, pin the tail on the donkey and welly wanging. All of our friends and some family camped on the farm on the night of the wedding. The prize for winning the games was that you got to stay in a beautiful shepherds hut. They got quite competitive!” 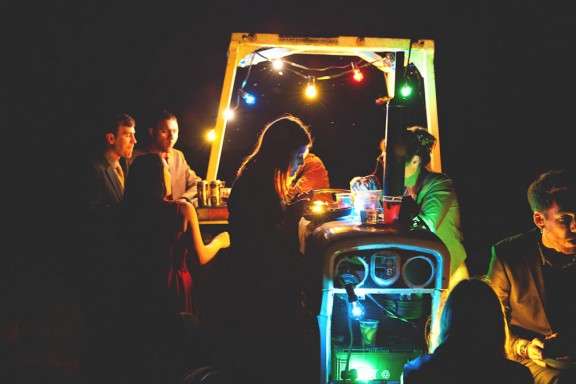 Beautiful! I love the three-part wedding idea and the fact that each bit had a different location. Thank you to the fabulous Tam & Rob and their awesomely talented wedding photographer Laura McCluskey for sharing this with us today. 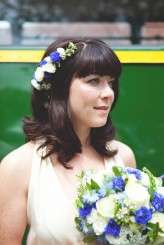