You know I’m usually all about the rock chicks, but there is just something about a quirky, DIY, eco, British wedding that I just can’t resist…and that fact that the bride wore Vivienne’s (I have them in yellow)…well I’m sold! Photographer Mark told me the whole story:

Marie and Karl chose the personal, DIY approach to ensure their wedding reflected their eco-conscious principles, where possible, combined with their love of elegant, vintage styles, nature and music! The day was based in two venues in the Northern English Forest of Bowland on a snowy day in late December.

The invite package contained screen printed and hand stamped bunting on recycled card and a button badge! The couple also set up a website was to encourage electronic RSVPs. 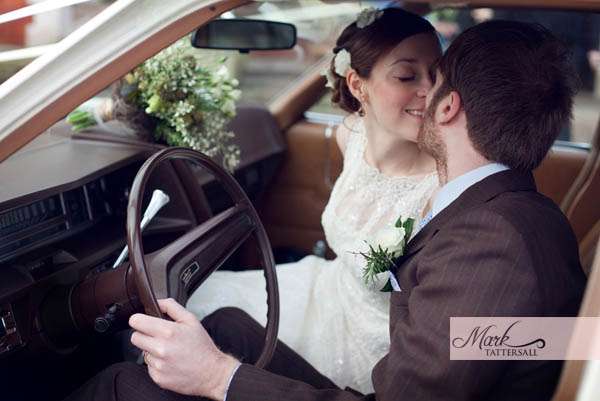 Marie’s uncle’s 70’s cream ford galaxy 500 was the chariot of choice which delivered the pair to the organic farm for their reception- a  gorgeous 17thcentury barn with heated floors and wood burning stove.  Guests were greeted with mulled wine, hot vimto and the bride’s own homemade spiced biscuits served in an array of mis-matching vintage tea cups and saucers. Most of the deco was Marie’s own DIY effort -table centres were constructed on slabs of fallen pine/oak trees with arrangements of flowers she picked and dried over the year, vintage glass medicine bottles (car boot sales) and potted herbs in painted pots/vintage clay pots.  Soy candles were arranged in charity shop finds- sherry glasses as votives and old glass jars covered in 1920s musical manuscript. Bunting was made by Gregg McDonald using off-cuts from the bridesmaid’s dresses (fabric from a brilliant mill in Bradford called Bombay Stores).  Marie hand made some paper birds to sit on the edge of champagne glasses as place names and napkin rings were a ring of two-tone ribbon finished with a button. Karl designed and made “cootie catchers” which were placed on the dining tables featuring a selection of the couple’s favourite lyrics for entertainment between the courses of soup, pie and home-made cup cakes (courtesy of Marie’s  mum and auntie)! The couple had been secretly attending swing jive dance lessons to surprise their guests and performed their first dance to Ray Scott’s red hot R n’ B number ‘Silk, Satin n Lace’. Later in the evening  Karl’s band, including grooms men, ‘Super Johnny K and the Bang Bangs’ played a short set of vintage psyche n surf rock tunes.

Marie teamed a stunner of a dress with her Vivienne Westwood shoes. She chose Daven by Pronovias and wore upcycled hair accessories ( from dress cut-offs and old sparkly bits) from Rebeccastone on Etsy and earrings which she also found on Etsy. Her bridesmaids wore dresses by Raouli. Karl wore a 1960’s suit which he found on Ebay and a printed tie & hankerchief from Liberty. 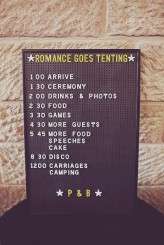 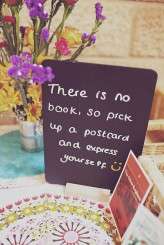 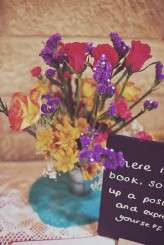 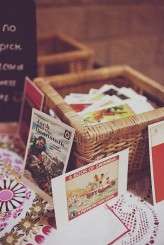 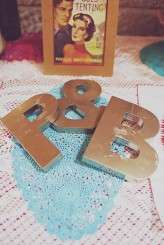 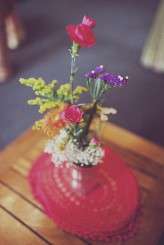 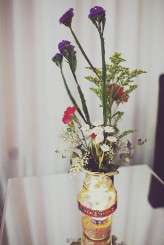 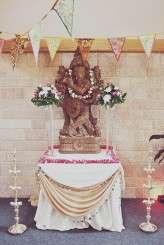 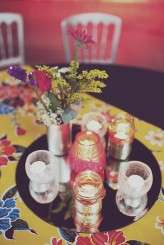 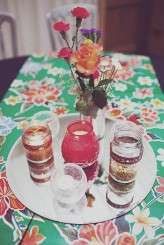 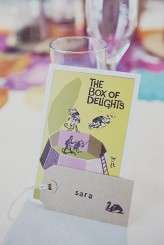 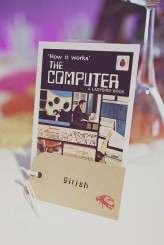 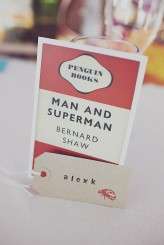 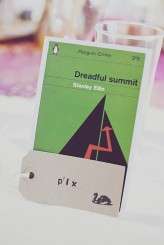 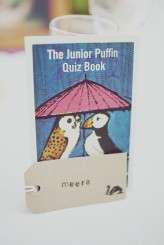 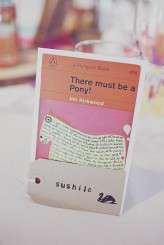 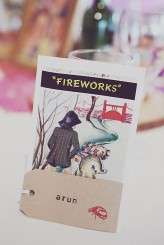 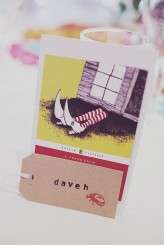 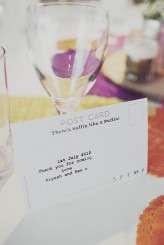