Hey Hey…I am back, did you miss meeeee?!  We had a fabulous (and very fancy) time in Brighton this weekend, our hotel was ridiculously posh and we got it all for free (including two 3 course dinners which totaled more than we would spend on food shopping in a month!)  I am surprised they even let us in with my pink mop and Gareth’s j-rock do…

Thought I’d come back with a bang and share this fantastic wedding I have been dying to get out there as soon as I found a few of the images on flickr…I was forced to wait however as the photographer, Phaedra had not yet finished editing them all.  I’m glad I did though because now they are even better than when I first saw them.  This rockabilly style just makes me swoon…and it’s all PINK!
What is also brilliant about this wedding is that almost everything was handmade by local (Californian) artists, Phaedra was kind enough to share some of these with me…
A few details about the wedding- the theme was 1940’s Rockabilly, and just about everything was handmade custom by local artists. The ladies’ attire was made by Debbie Carper (209-656-9334) from Denair, California. The tuxes and men’s shoes were by MX Tux in Merced (209-722-3388). The cakes were custom designed and made by Christy Lobao of Hilmar, California. (209-233-1991). The flowers were made by the Pitman High Agricultural Department (209-602-1146). I made playbill style wedding programs for them.. and my team photographed the wedding (www.phaedraphotography.com) The hair and make-up was done by Amber Tucker (209-324-3239) I’ve seen Amber’s work a few times now and I’m switching hairdressers! The woman can pull off anything!

For the rest of this wedding, check out Phaedra’s Flickrstream 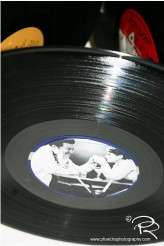 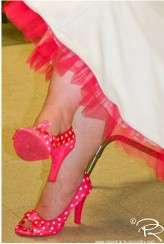 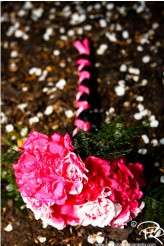 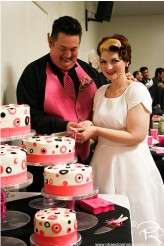 Describing their day to me as a 'pants themed wedding' didn't fill me with the utmost confidence about what Candice & Mark's South African shindig might look like... but I'm pleased to report that my fears were unfounded. Pants themed weddings rock!