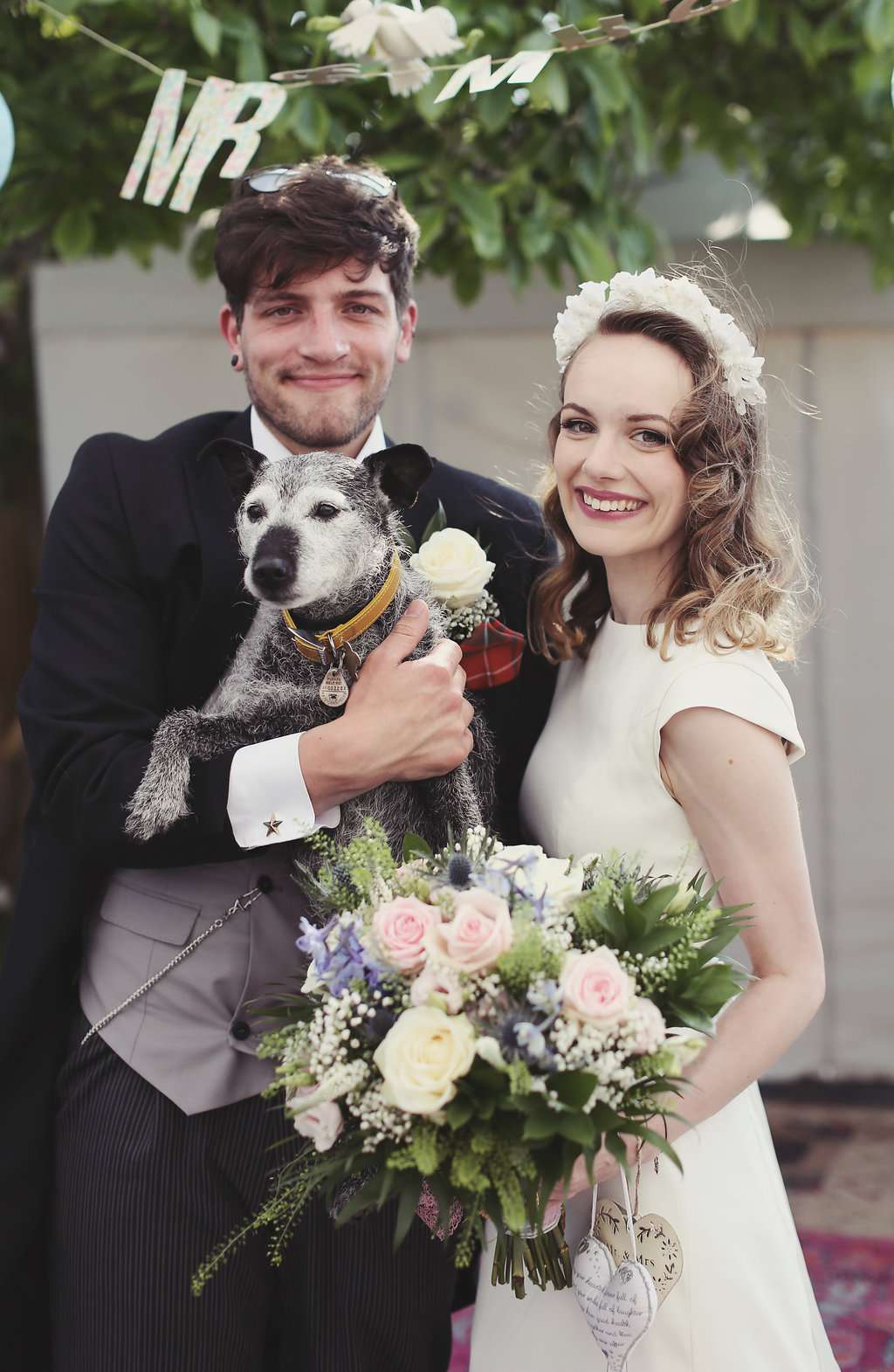 Elissa and Joey’s English garden wedding is a totally joyous, tear-jerker affair. And you know us, we’re not about the clickbait life – it was genuinely a deeply emotional collaborative effort using as many beautiful homemade elements as possible. With that in mind, here’s their theme, explained better than I ever could:

“When my Grandma became poorly we had to help her sort through her accounts and paperwork,” Elissa recalls. “It was a total filing catastrophe but in amongst the reams of paper and notes she had catalogued and treasured so much ‘stuff’ to do with us all – receipts from long forgotten occasions carefully annotated, preserved flowers, notes of our minor achievements to the extent she’d created a huge archive of all of our lives. It was a real reminder of just how important we all are to her, and her love of family and ability to see the significance in tiny things in when times are hard was our major inspiration.” 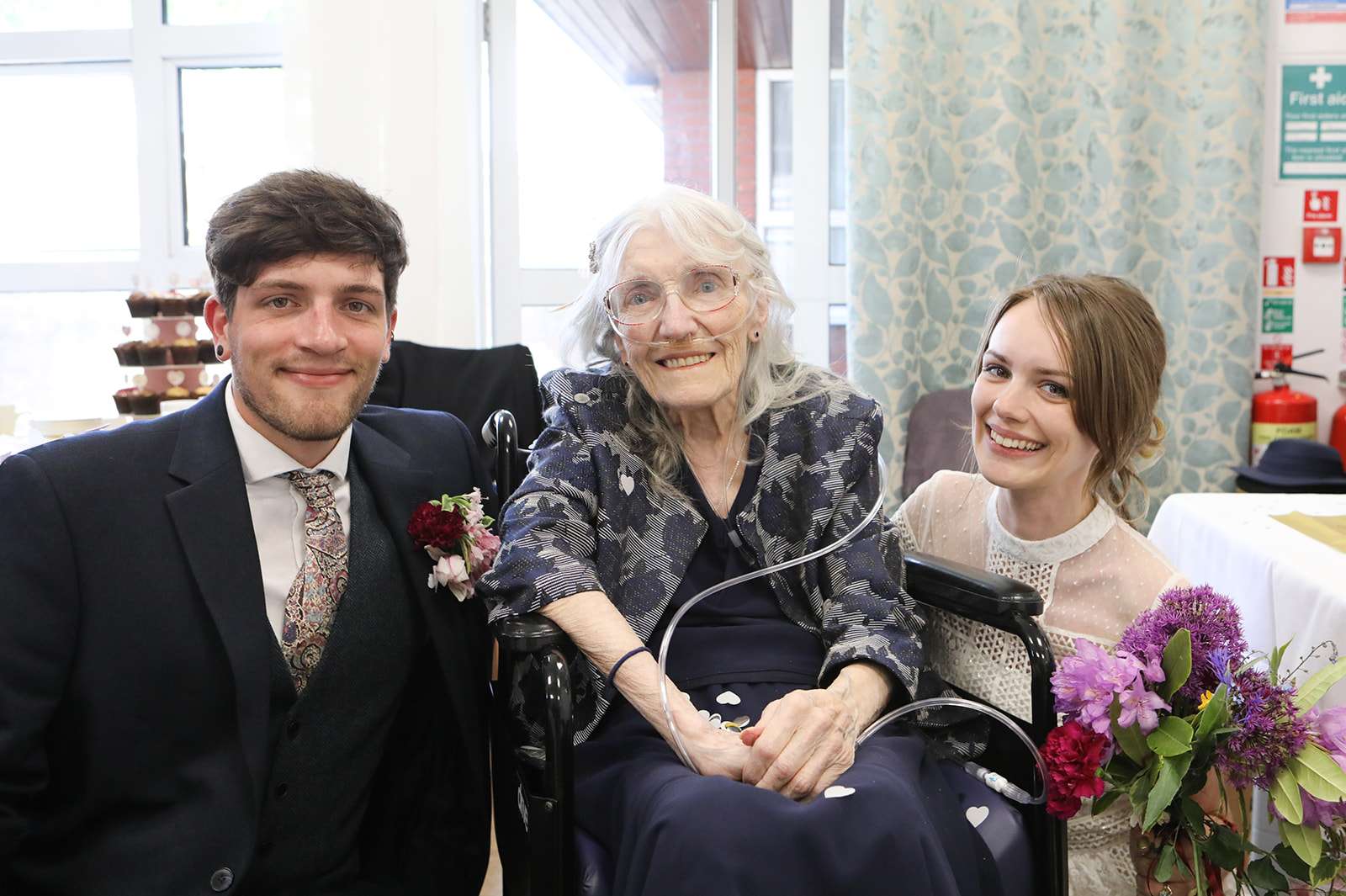 With her grandma’s health declining, Elissa and Joey had a registry office ceremony and a mini-reception in her care home the day before their garden wedding. “I made my bouquet from flowers from her garden and used some of her ornaments to decorate the registry office, whilst her carers did her hair and make up and helped her decorate a cake for me as she always wanted to bake my wedding cake,” she says. Told you it was a beautiful, raw, honest tearjerker, didn’t I? 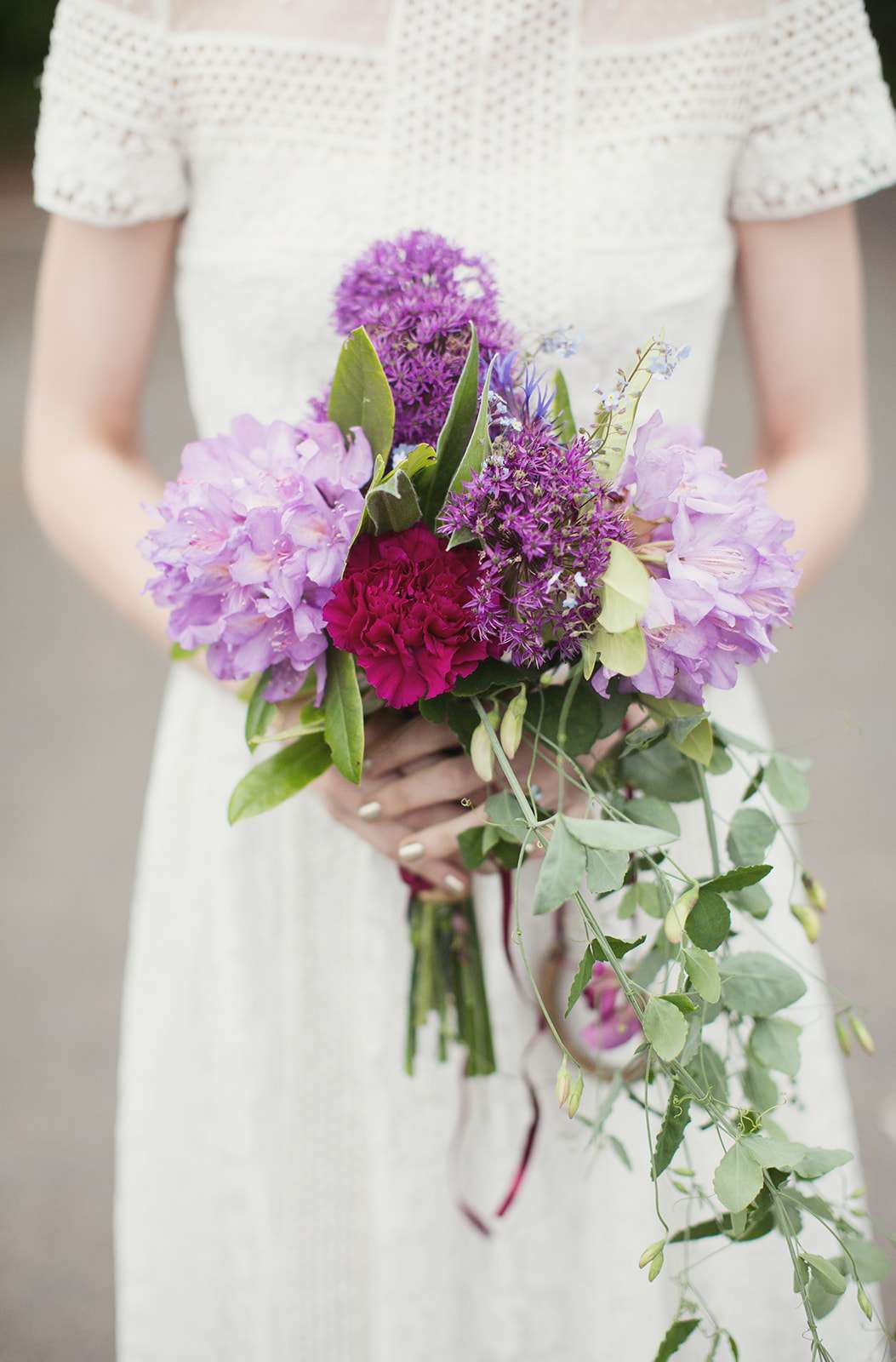 For their Saturday wedding, they kept everything similarly close to home – the venue, in fact, was home! As both Elissa and Joey are humanists, they were able to be flexible with their location, and so decided on their back garden. “We had a pergola built over our garden and used this as our marquee frame,” they explain. “It was one of our main big expenses but worked out at roughly the same as a marquee hire anyway, but it’s a permanent structure we’re now training roses around and can still enjoy it past the big day.” 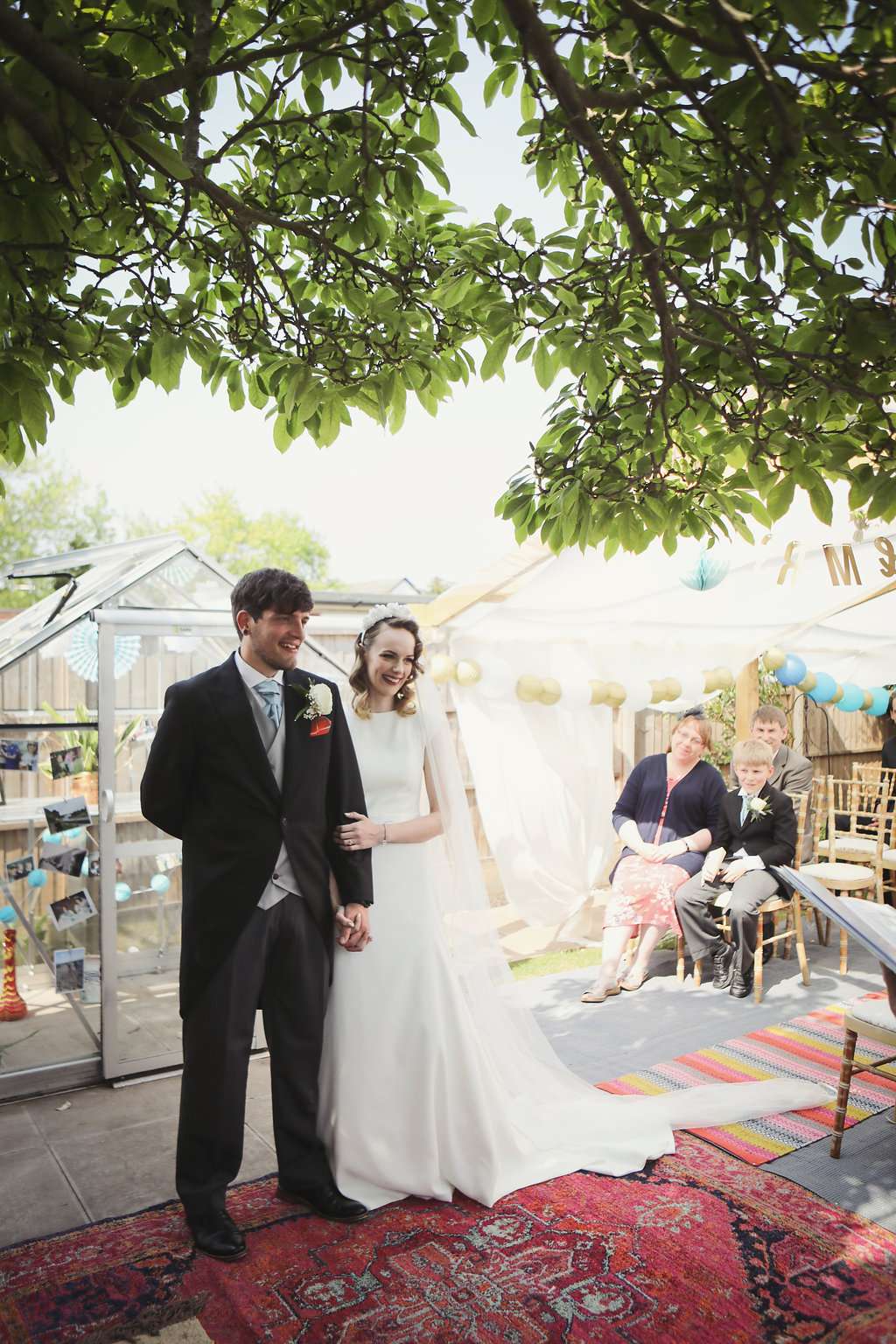 With torrential rain the day before resulting in a manic operation to save the pergola’s waterproofing on the morning of the wedding, Elissa ended up running about 40 minutes late. “But when I joined the queue to head down the aisle I forgot absolutely everything! I’ll never forget the curtains drawing back and seeing our garden full of our friends/family,” she remembers. Eliza Johnson led their handfasting ceremony, which featured by some beautiful readings, including Clara Simpson’s Opportunity, which had been given to Elissa’s grandma by her grandma on her 21st birthday in 1951, and given to Elissa after she got engaged. After the ceremony, they battled a ‘confetti assault course”‘(errr…we may have finally found exercise I’m willing to do) and the groomsmen opened ASDA’s finest bulk-buy Christmas prosecco for everyone. 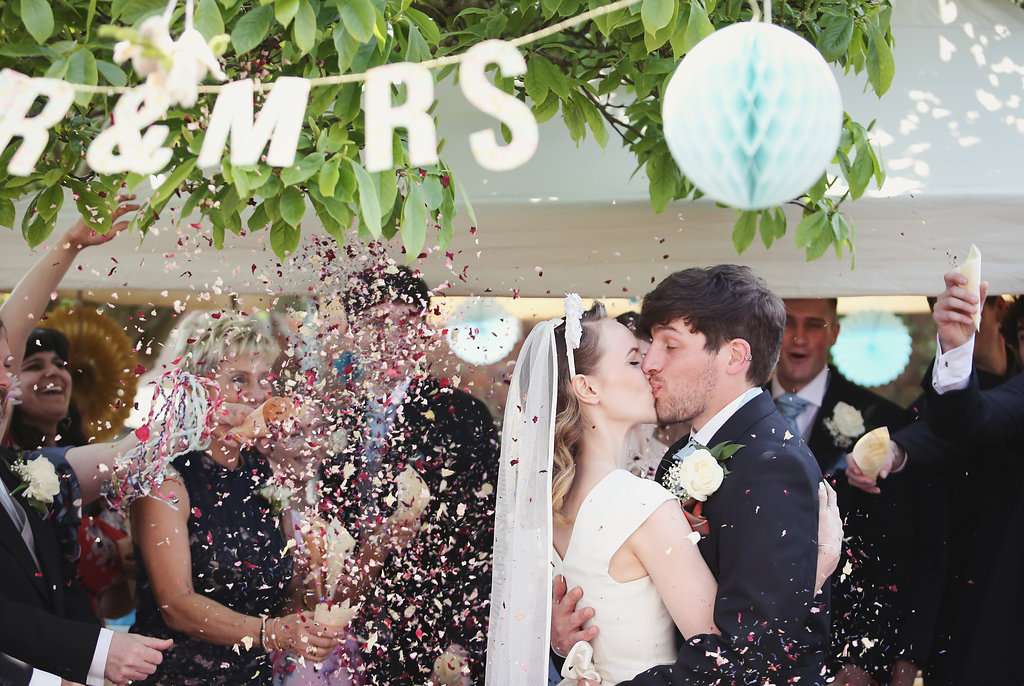 Elissa’s beautiful and elegant capped sleeve dress was made for her by her mum, from material they found in the John Lewis sale for £25! She also made her veil from the same material her own wedding veil was from,”Thank god she’s a fabric hoarder!” Elissa laughed. They also saved money by getting a lot of their decor from charity shops and clearance sales, making the most of end of summer discounts for wedding items and Christmas sales for general glitzy bits; and by decorating the whole reception venue with two big bags of sweet williams from Halwyn Nurseries. 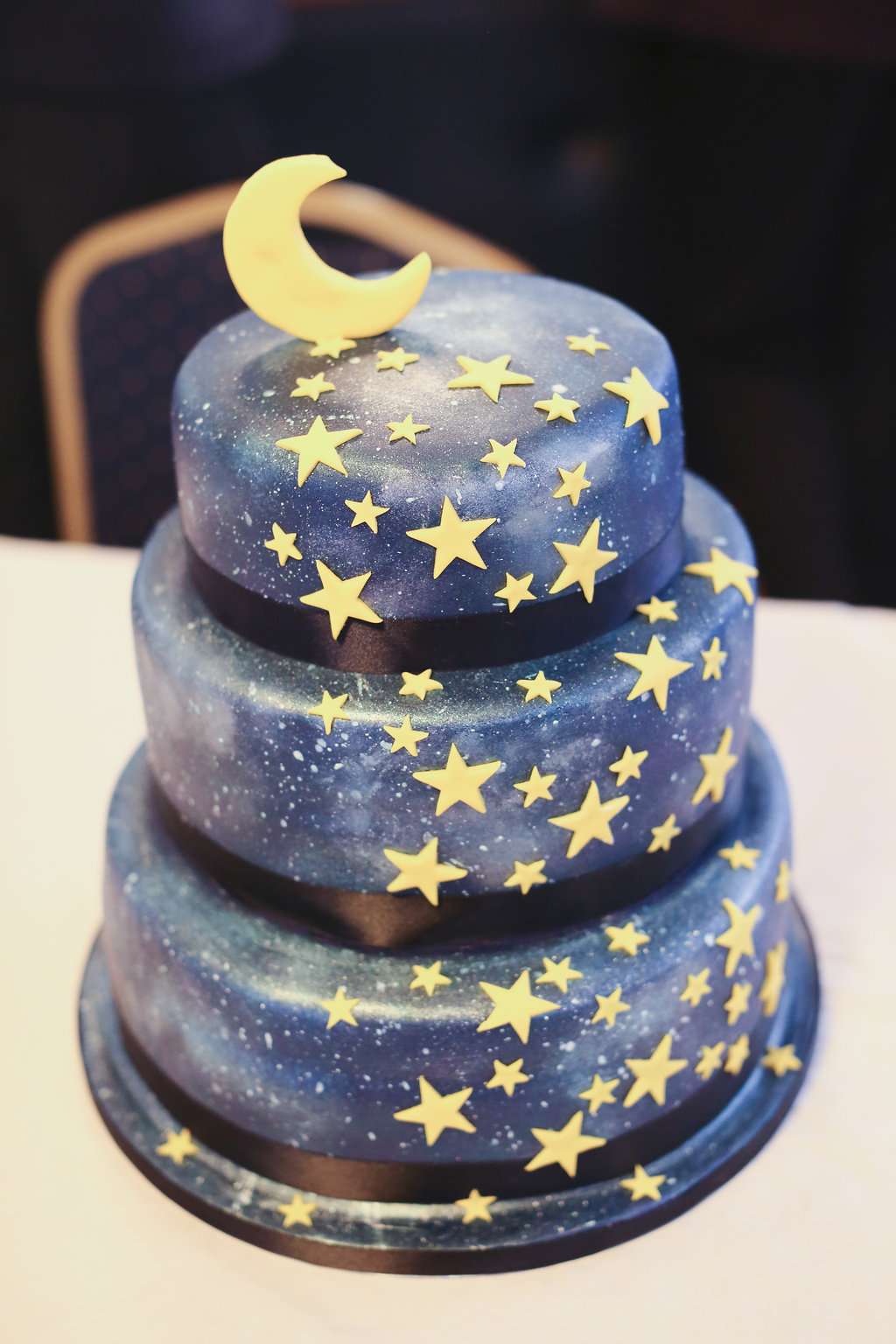 They rounded off the night with what Elissa describes as the “Loudest, stompiest group sing-along to Come on Eileen I’ve ever been involved in” – her and Joey have a theory that a wedding isn’t legally binding until Come On Eileen is played, so a lot was riding on that moment. I have a theory you may be quite misty-eyed right now, so grab a tissue and look through the rest of the photos… 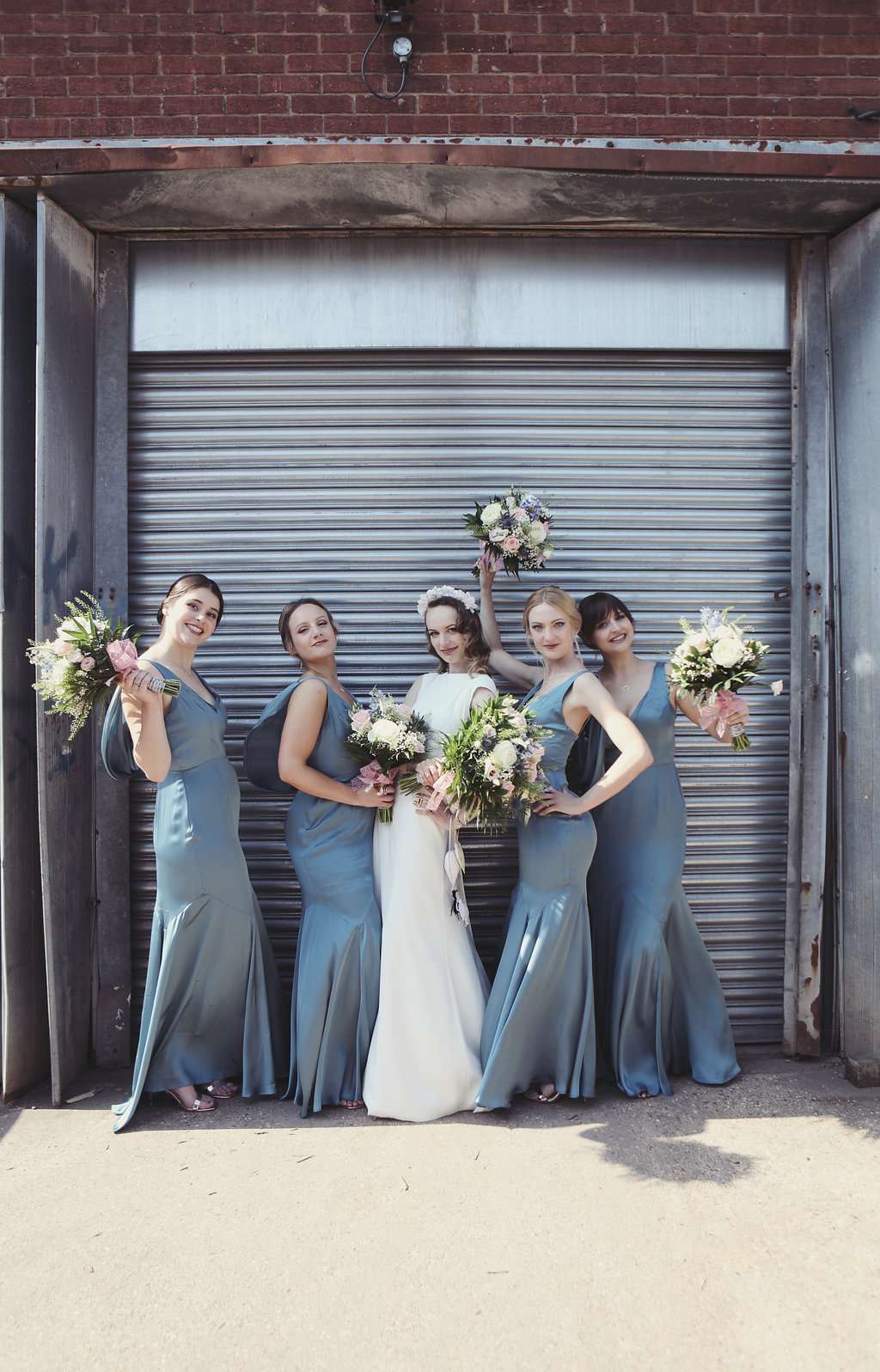 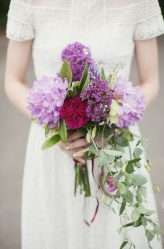 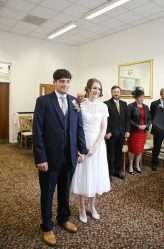 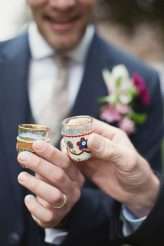 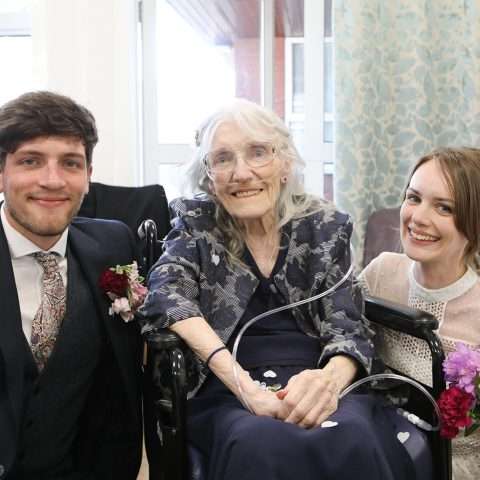 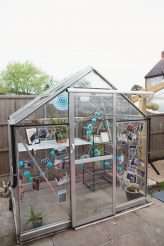 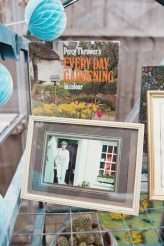 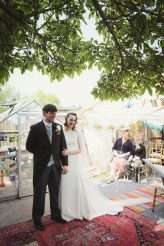 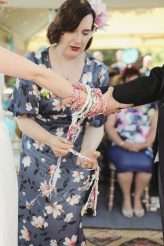 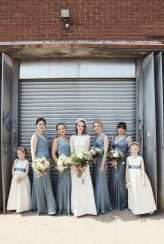 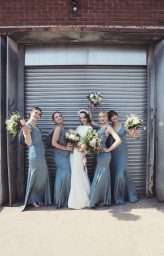 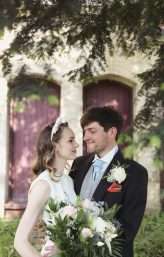 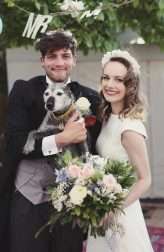 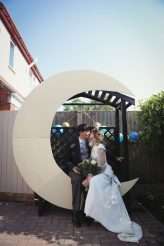 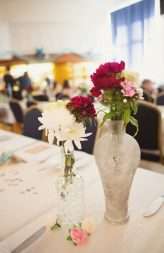 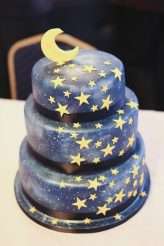 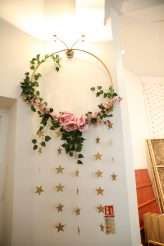 Philip & Katie-Jane had a handmade wedding in the bride's parent's back garden. They hired a tipi and decorated the whole garden with the things they love - creating a really magical looking space. They even converted the shed into 'The Poppy Red Shed' (Poppy Red is a bar in Birmingham which the bride and groom first met) which they stocked with local ales, spirits and liquours.

Ella and Alex got married in the spring at the Secret Garden in Kent, where they had a day filled with floral patterns, pastel shades (as well as fresh vibrant colours). The overall feel to their wedding is just pure romance. And by the powers of DIY, they achieved this beautiful day for £10K.

A Pretty in Pink, DIY Back Garden Wedding

You probably already know this, but here at Rock n Roll Bride we are pretty much obsessed with pink, so when Amy and Adam's wedding landed in our submissions inbox we were thrilled! The couple were married at the bride's mum’s house in September and the entire wedding was DIY. Pink was the very obvious theme, but the bride loves Sofia Coppola’s Marie Antoinette, so that was a big reference point for them too,