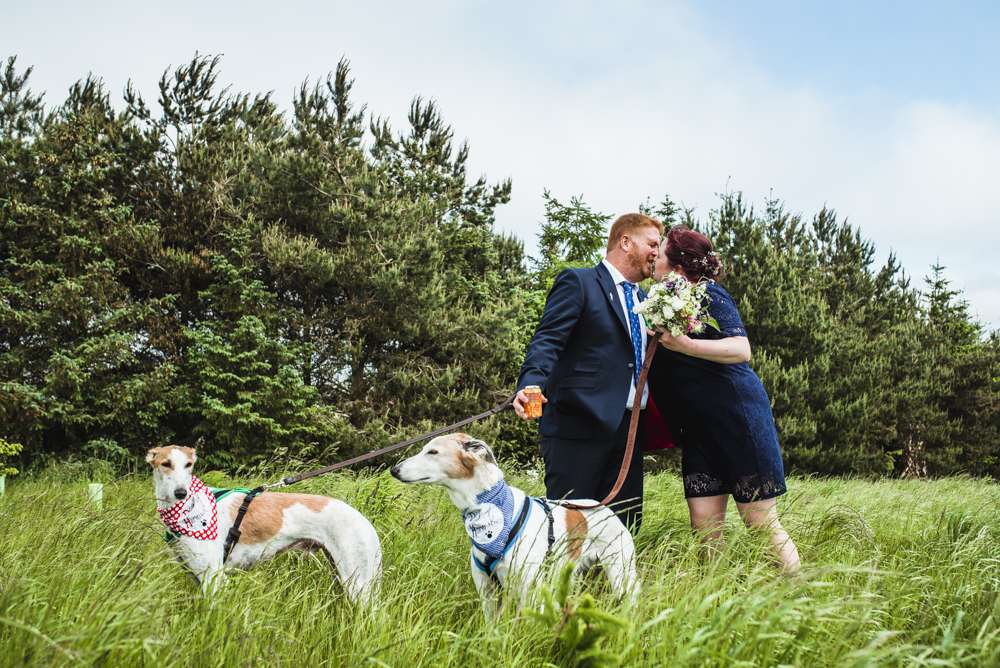 Emma and Kevin wanted their wedding celebrations to reflect their lives, ‘as if you’d just walked into their house’, and I think they totally nailed it. A relaxed barn ceremony, a navy (non) wedding dress from Dorothy Perkins, and their two lurchers made their day super personalised and absolutely perfect for them. Bucking loads of traditions – which Emma wisely says “carry too much symbolic baggage”, they got married on a Tuesday to save money. Oh, and they also had a beer blessing. So, y’know…

They describe the decor they used at Deepdale Farm as “an eclectic mix of junk” designed to make their guests feel like they’ve just entered their home, including vinyls, snow globes and flowers, the exact kind of things they have lying around their house. “First and foremost we wanted our friends and family to have a good time,” Emma and Kevin explain. “We thought about how we could make them laugh – we got napkins done with close up photos of us on them as we thought it would be hilarious for people to wipe their mouths on our faces…” 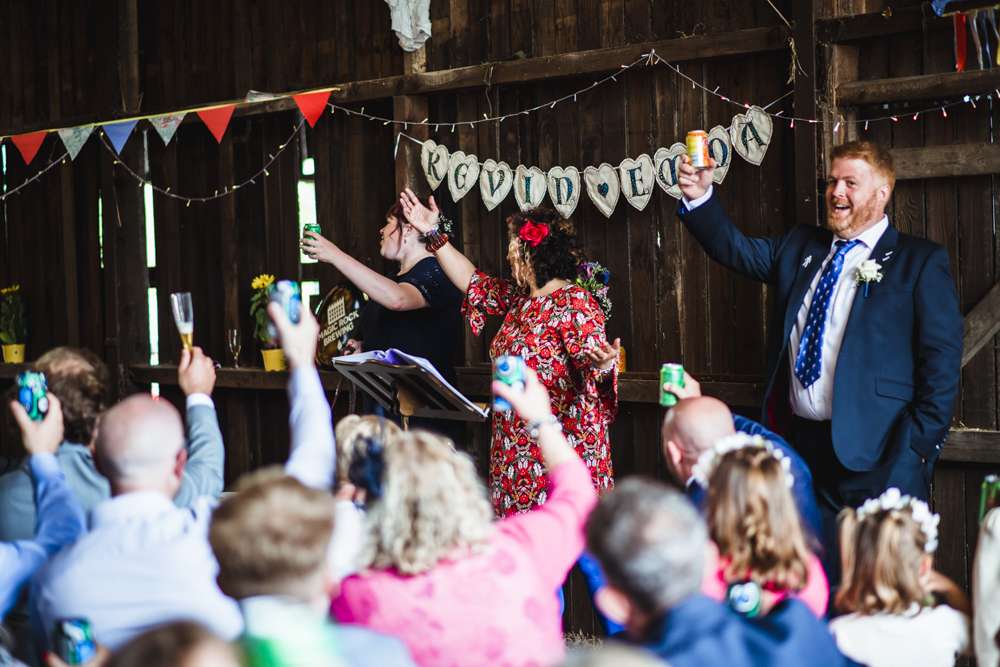 They kept the ceremony light-hearted, keeping true to what they truly wanted. “As we were legally married the week before in the registry office, we had the freedom to be a bit creative with it. Led by our wonderful celebrant Louisa Starr, it involved our guests doing readings, a quiz answering questions about each other in teams, and a Countdown conundrum. It was totally daft! Our dogs Max and Matilda ‘gave us away’ and totally stole the show at times. We handed out beer from our favourite local brewery, Magic Rock, and had a beer blessing as a sort of interval – our ceremony afterwards was punctuated with cries of ‘All Hail the Beer!’ We finished off the ceremony with our friends reading Dr Seuss’ poem Oh The Places We’ll Go in a flash-mob style, party poppers, and David Bowie’s Heroes.” 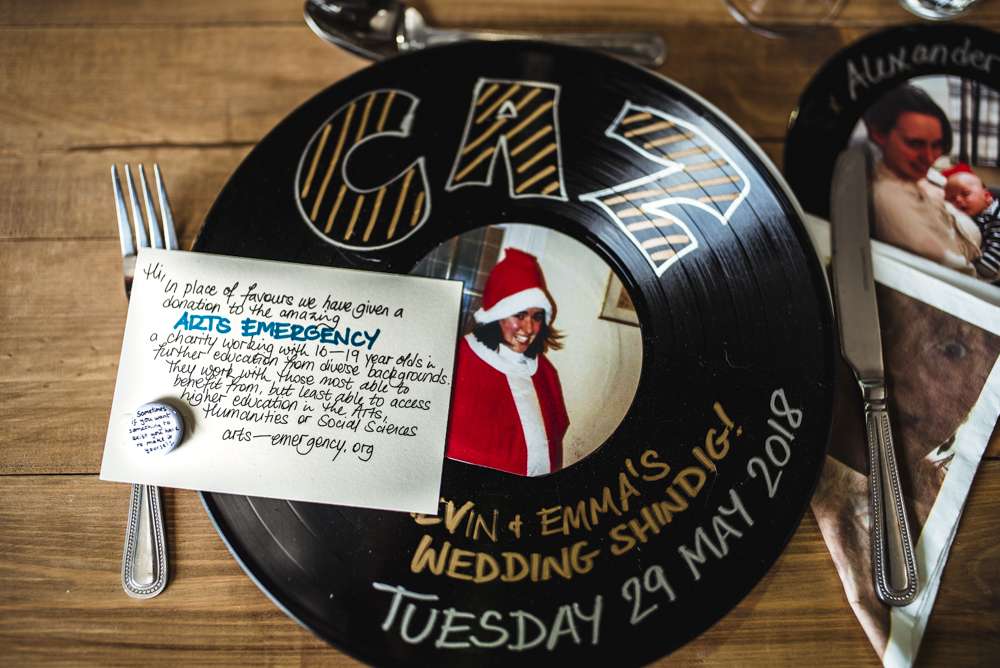 For their reception, Emma and Kevin DIYed their place settings, taking old vinyls and gluing guests’ faces into the middle before writing their names on them. “People just wandered round until they found their place and enjoyed the funny photos,” Emma remembers. “Everyone took theirs home, which shows they really liked it – and no waste!” Emma stitched the ‘dog of honour’ neckerchiefs for their lurchers, and their favours were badges from Dogs Trust, Prostate Cancer and Arts Emergency. Their goodie bags contained Emma’s old Beanie Babies. 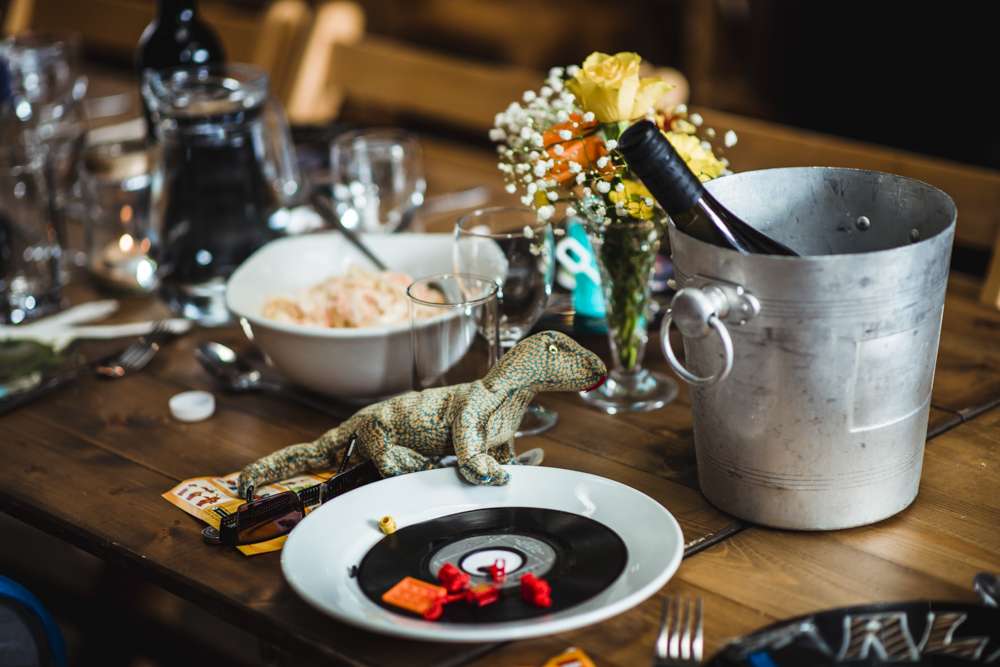 Friends and family also pitched in with creative talents, as Kevin’s mum Maureen did all of the flowers for the venue in a mix of wild flowers and foliage, and their friend Jenny made their two-tier cake. 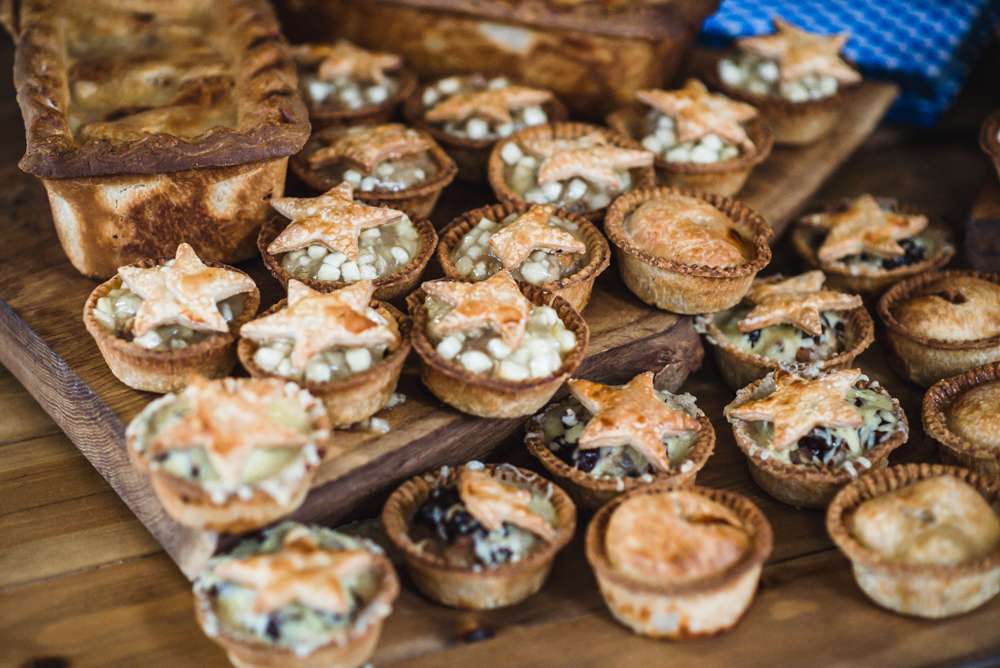 They chose outfits that they’d feel comfortable and, most importantly, themselves in. For Emma this meant not going anywhere near a traditional wedding gown. “I wore a navy dress from Dorothy Perkins that I got for £30 in the sale – bargain! Kevin wore an Antich Tailors suit (he grew his beard himself). For a while I got caught up in the ‘find the perfect white dress’ compulsion – I bought a dress off Etsy from the US and it was lovely – made from recycled materials and all floaty and ethereal. I tried it on, and although it looked fine, it just made me feel weird, like it wasn’t me, like I was being wrapped up like a present.” 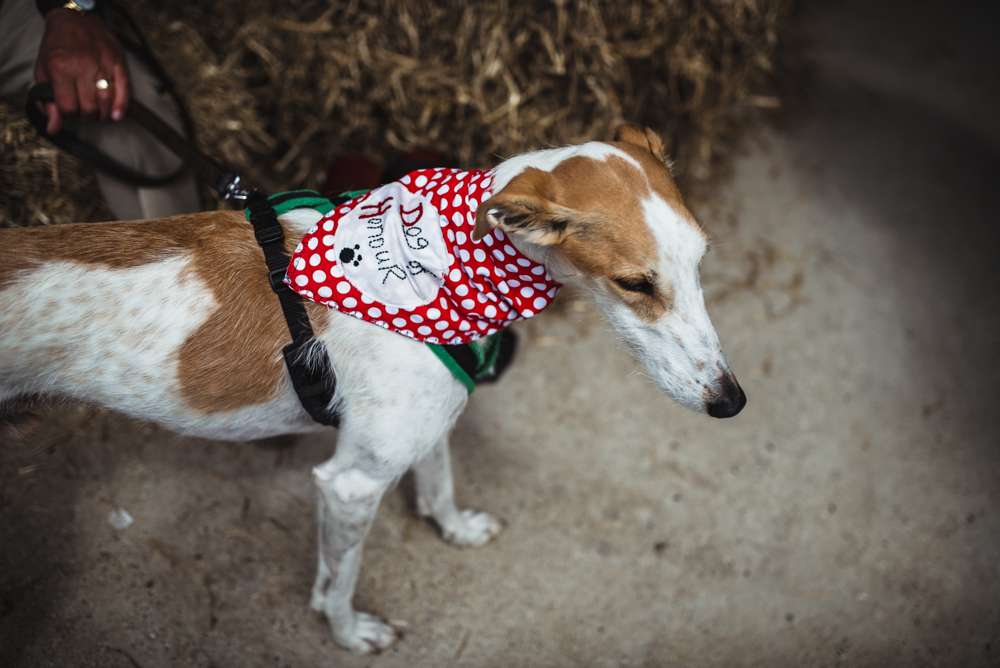 “In the end, I just bought a dress that I love in the sale on the high street and an awesome leather jacket – both of which I have worn since. It was such a relief! I wish I’d just done that from the outset – I sort of had an idea what I wanted to wear, but got sidetracked by the ‘perfect dress’ rhetoric. There was a lot of symbolic baggage that came with wedding planning – we’re all conditioned to think a certain way about weddings – but we just didn’t do the traditions that didn’t mean anything.” 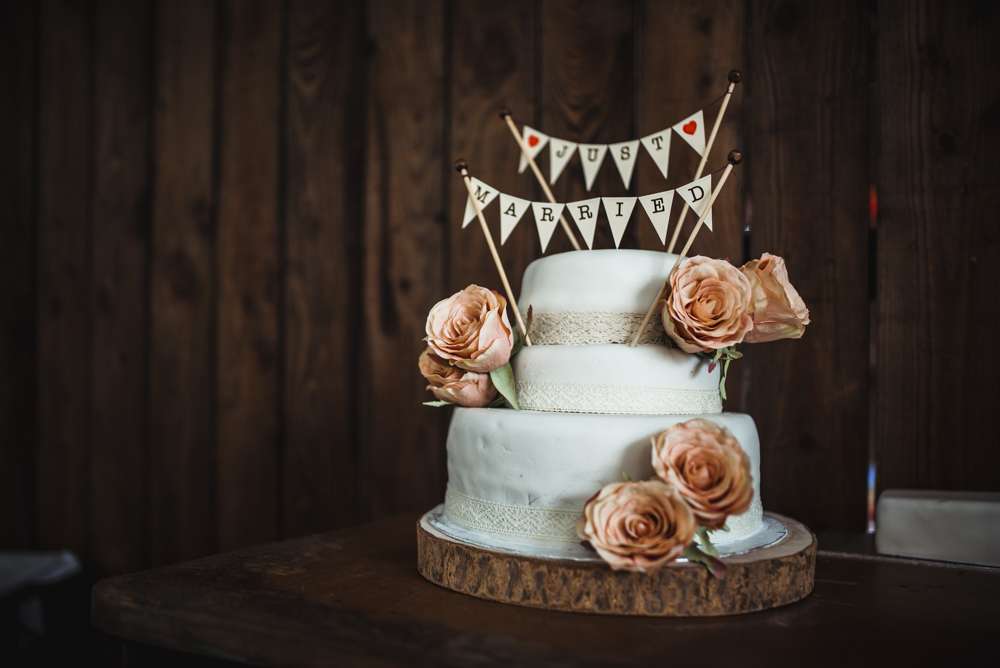 Continuing her sage alternative bridal wisdom, Emma advises: “It helps to choose to work with people (photographer, celebrant, venue etc) who have similar values to you, so you won’t be pressured into doing things other than how you want them. Also follow lots of body positive accounts on social media, to combat the onslaught of wedding diet nonsense you will be bombarded with. Challenge anyone that makes you feel like you have to lose weight for your wedding (including yourself at times) because people are there to celebrate you and not how much space you take up or your thigh gap or whatever. You are you and you’re perfectly you.” 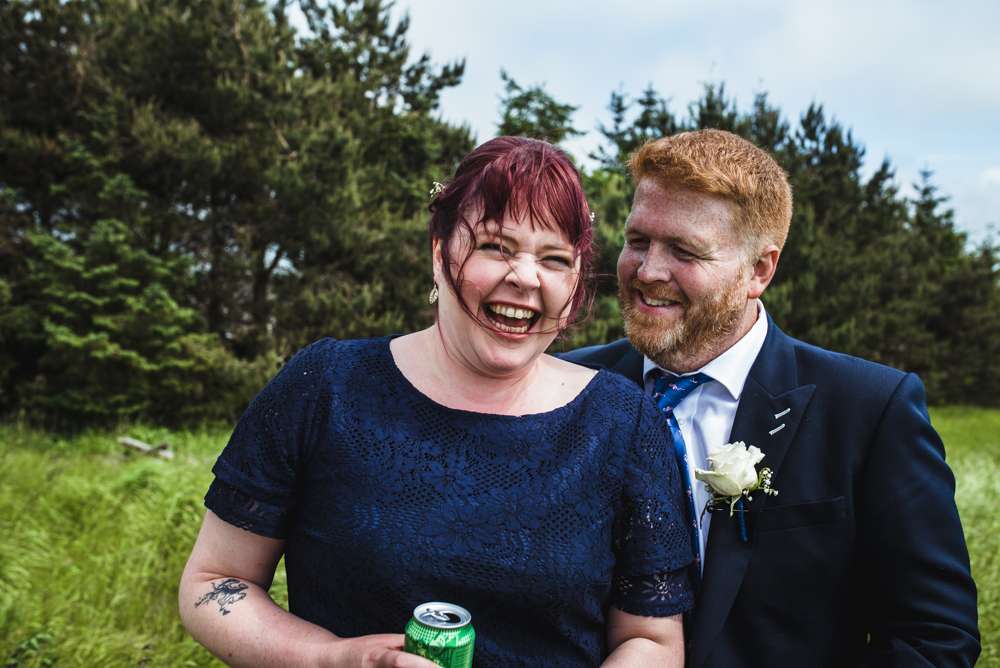 And that, my friends, is a mic drop (or, as in Emma’s case, the end of her wedding speech against the patriachy fittingly interrupted by their amazing brass band, Loud Noises, bursting in with Oh When The Saints…) 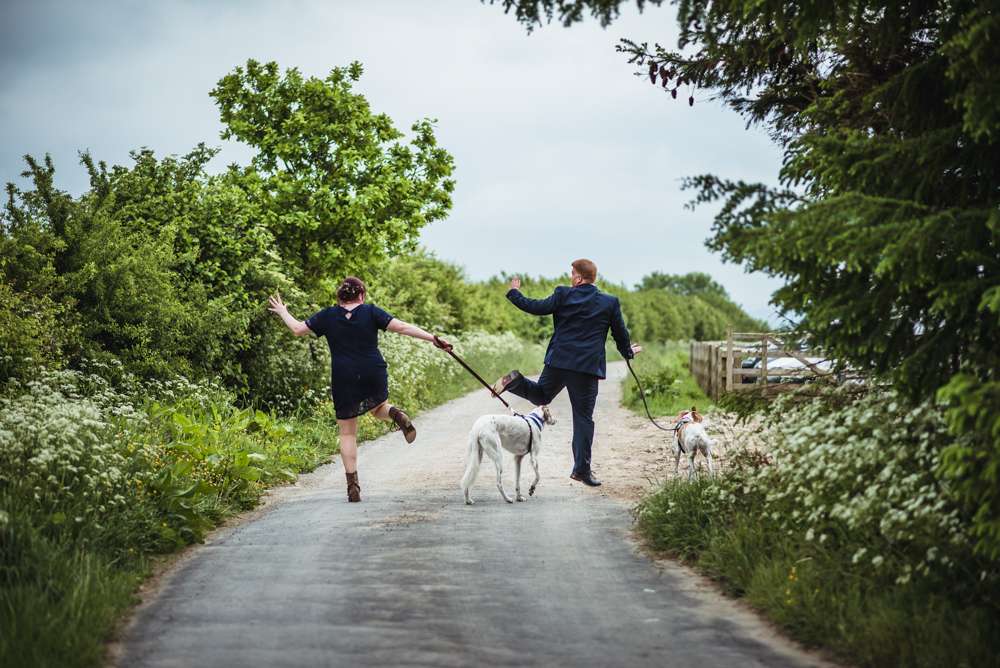 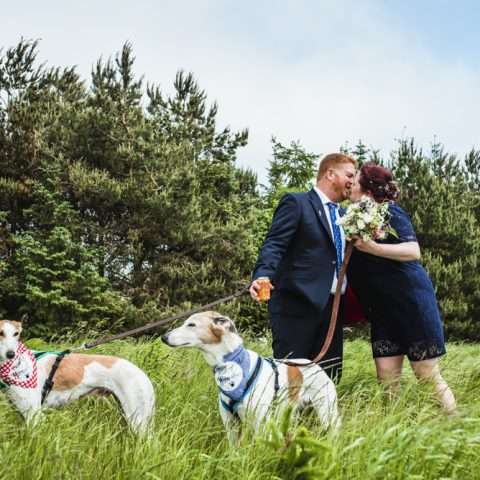 As self-confessed animal lovers, there was one non-negotiable when it came to Maja and Ryan choosing their wedding venue; whether or not they allowed dogs. The Silent Woman Inn in Dorset is nestled within the tranquil Wareham Forest, which really set the tone for their laidback day.

Sometime late last Summer I strolled into my favourite wedding boutique to visit my friends, Laura & Emma, who own it. Whenever I'm in central London I always pop into Fur Coat No Knickers to see their latest pretty vintage wedding dresses, to drink some Cava and to catch up on all the latest gossip. But this fateful day in August was different. I was greeted at the door with squeals from Laura, "I'm engaged! Tom Proposed last week!" she shrieked. More Cava was popped and we started to discuss all things wedding - but this time not other people's - hers!