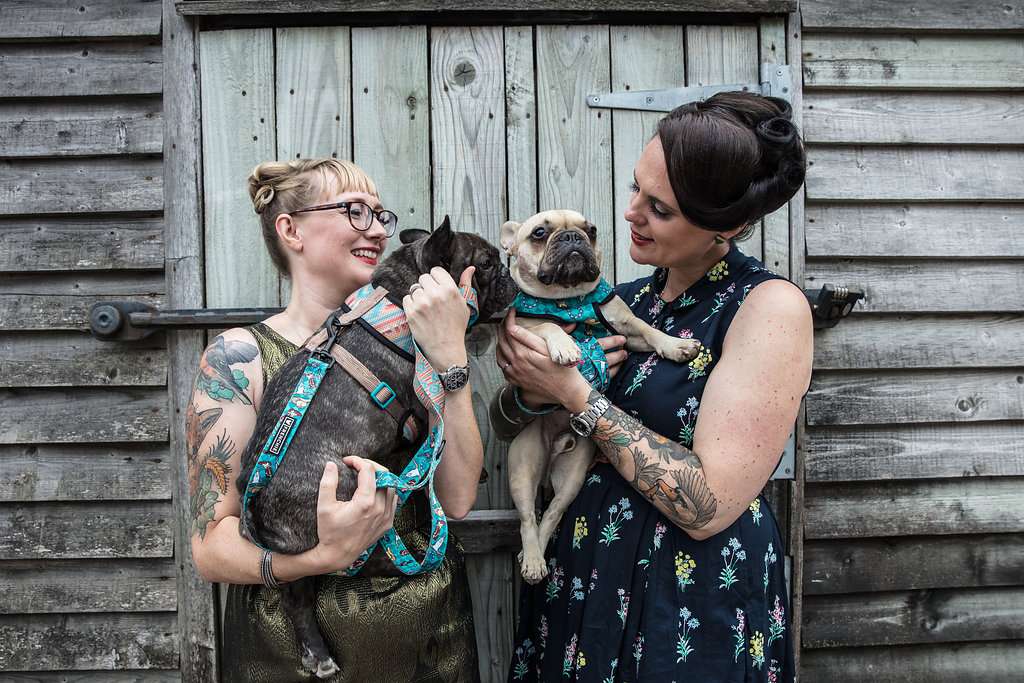 “The inspiration for our wedding was each other and the all things that we both love doing, wearing; eating and seeing”, they began. 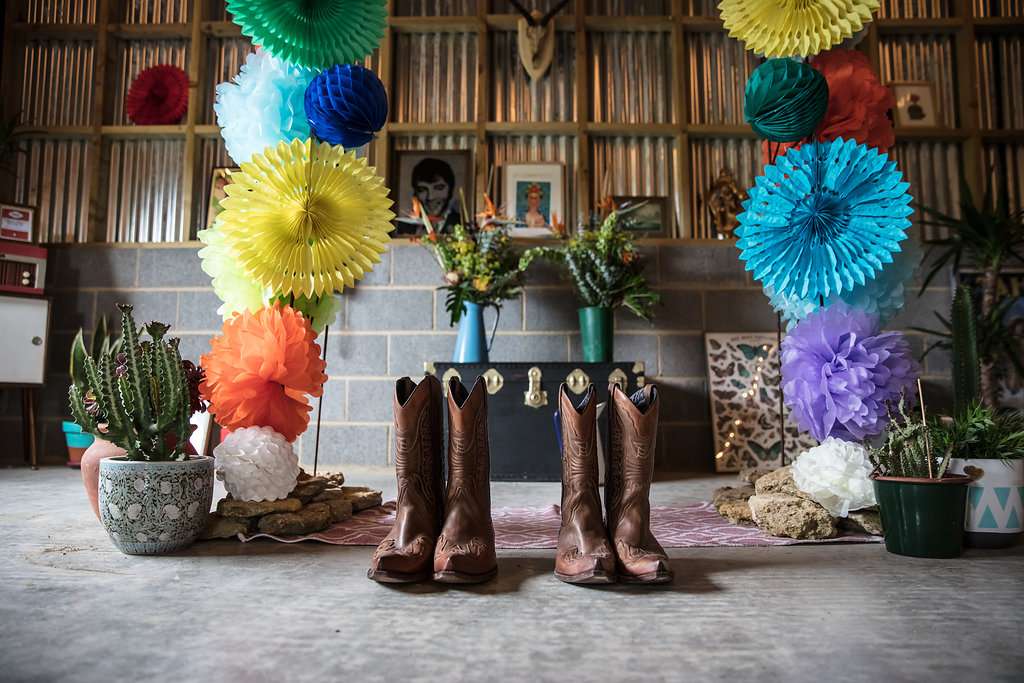 They were legally married a few days before so on the day they actually considered to be their wedding, Tam’s brother was able to lead a non-legal ceremony in the barn. “Court Farm is a really gorgeous site with two barns – a rustic barn and then a wool shed. We hired the venue from Friday to Monday, and then we organised everything ourselves and just built on the beautiful canvas Court Farm provided. They also had a fire pit which was really nice to gather around in the evening. The Host’s, Roger and Yvonne, are so lovely and helpful – they even lent us some hay bales! Court Farm is also dog friendly, so we were able to involve our fur-babies in the day, which was really important to us.” 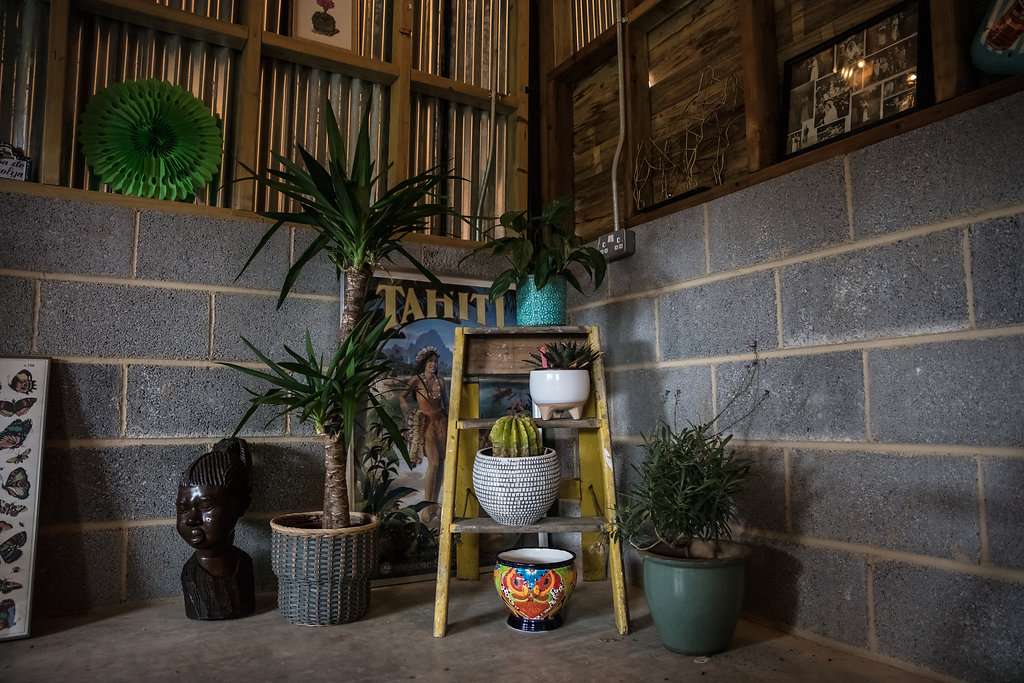 Neither of them wanted to spend a lot of money on their outfits, nor were they interested in anything traditional. So, they both picked their dresses up in the sales when they happened upon something they liked. They both wore two dresses each (one for the ceremony and the other for the party) and spend under £400 in total. They matched everything with comfortable cowboy boots. 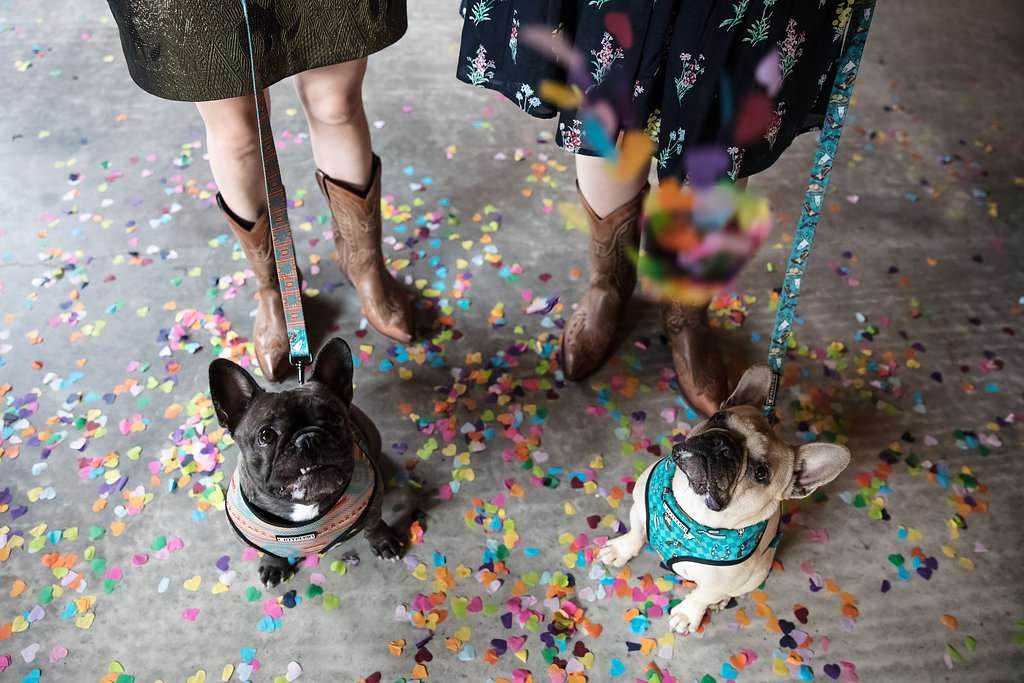 “One of the main points of our wedding was that we wanted everyone to be comfortable and for it not to be formal. We didn’t have any kind of dress code for our guests or bridesmaids. We had our pastiche of themes and suggested that our guests could focus on them as much or as little as they liked or just wear whatever they wanted. The same applied to our bridesmaids, so the older ones chose their own dresses and footwear and the parents sorted out the little ones.” 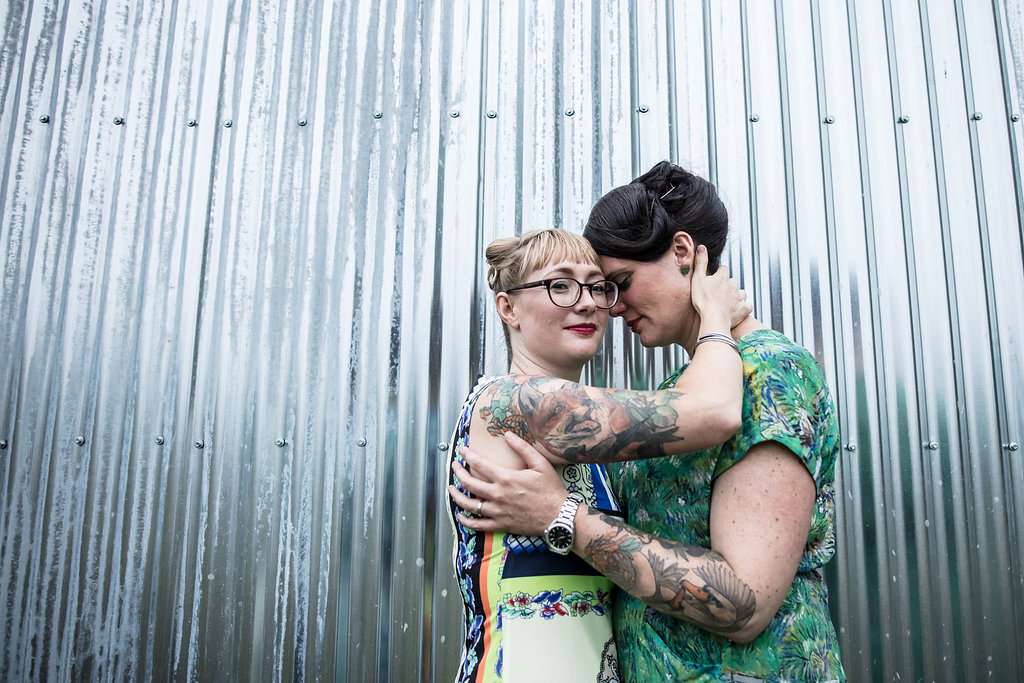 The food and drink was a big consideration for the wedding too. They avoided a traditional tiered cake (and cake cutting!) opting for cocktails and cake after the ceremony. They asked a few close friends and family members to bake cakes for them and what they ended up with with nothing short of spectacular! “They really pulled all the stops out, and we had an amazing array of tasty cakes. The margarita cupcakes complete with a pipette of tequila get an honourable mention! As Tammy is South African, and we wanted to bring a little bit of South Africa to the wedding, we got some Melkterts and Koeksisters made too. They are really tasty sweet treats, and we got these from Cooksista whose talents we’d tasted at a local market. They were epic.” In the evening they served Texan BBQ by Smoke Catering which included a selection of smoked brisket, pulled pork, salmon and mac ‘n cheese! 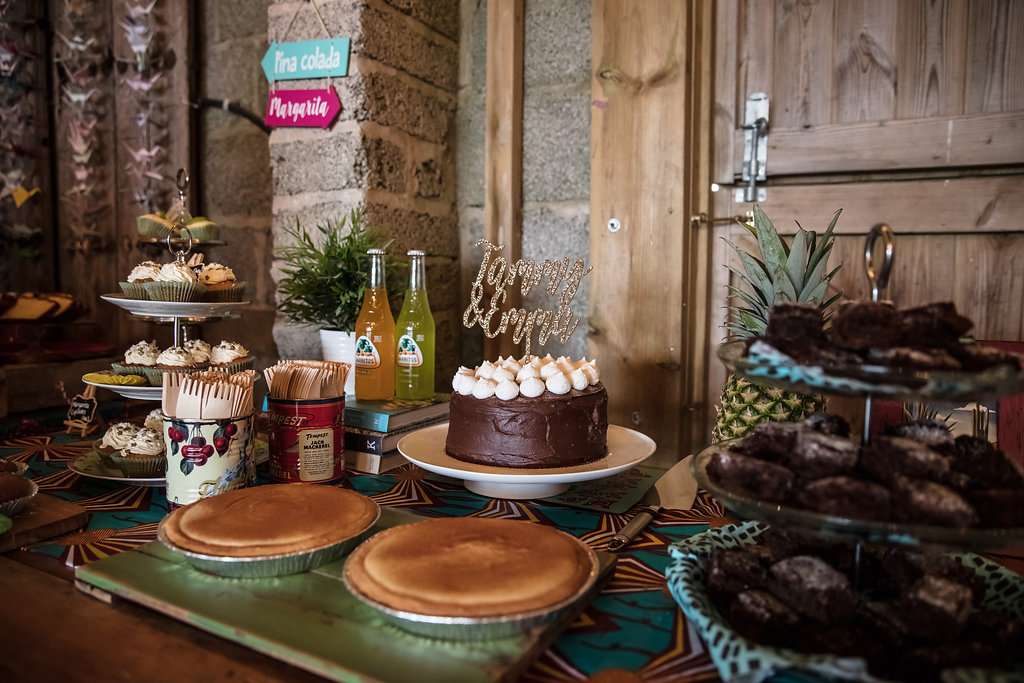 “I think the one thing that everyone says about our wedding was how personal it was to us”, they concluded. “We decorated the venue with curios from our own house, and pictures and photos of loved ones no longer with us. We also had wedding photos of our parents and grandparents. We didn’t have all the ‘traditional’ elements of a wedding – we didn’t have cake cutting or speeches or a first dance. We also had the cutest ring bearers our fur-babies Diego and Tallulah!” 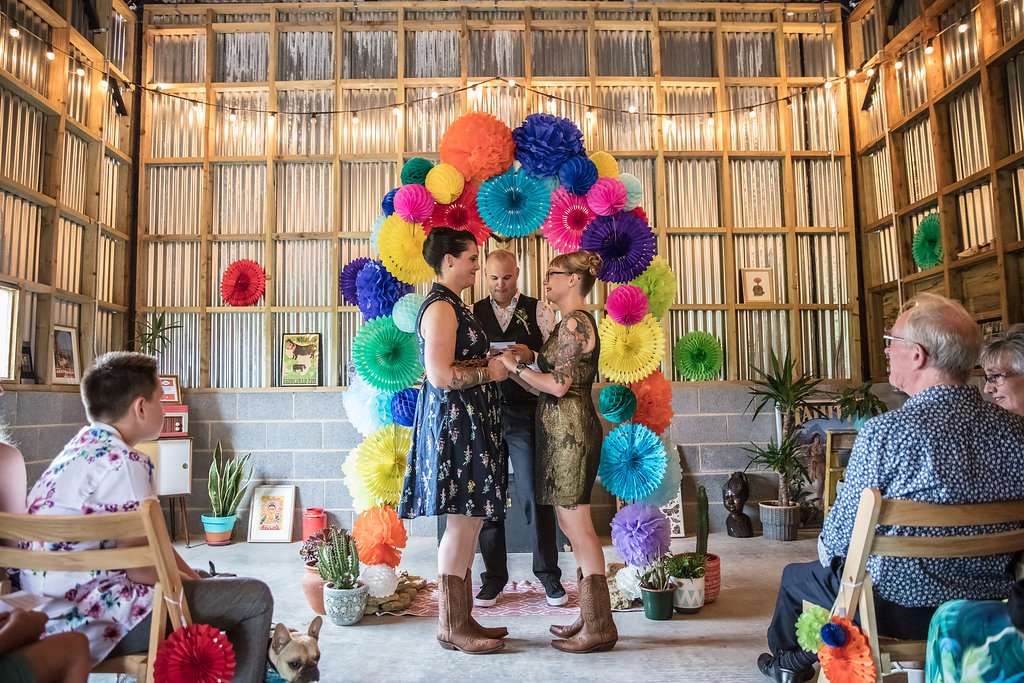 “It is pretty tough-going when you organise a DIY wedding, anyone that’s done it will know, but it’s all worth it in the end. You have to factor in that not everything will go to plan, but your guests won’t care or even know what you had planned in the first place, so don’t’ sweat it. Oh – and focus on actually enjoying the day, while it may have taken months and months to plan, it goes by in a flash!” 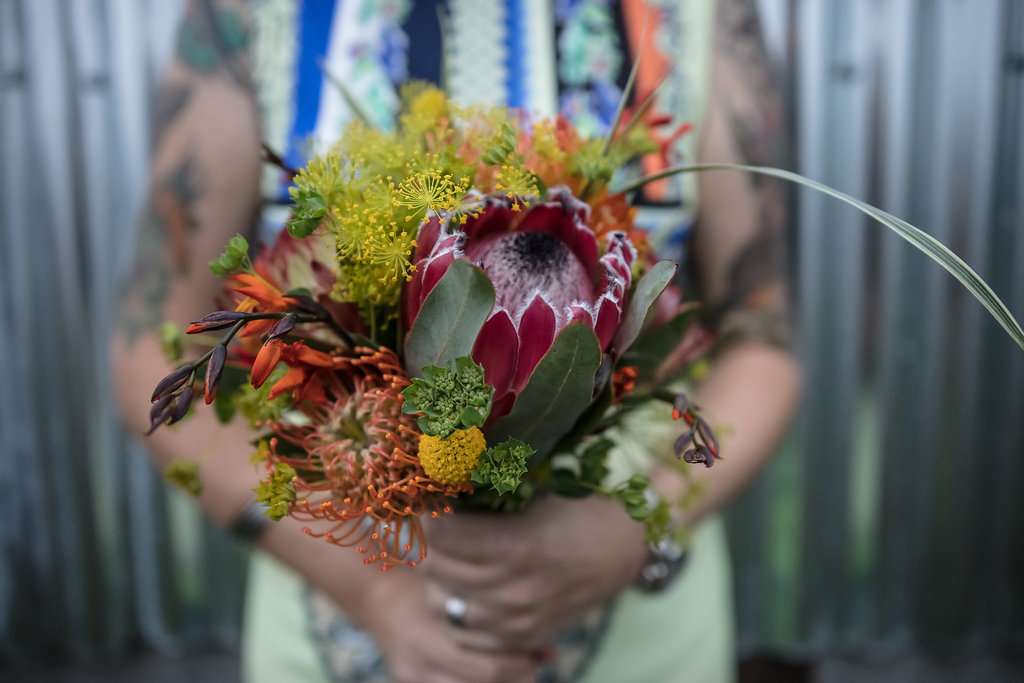 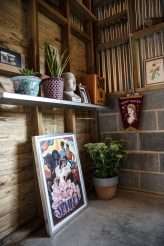 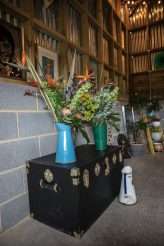 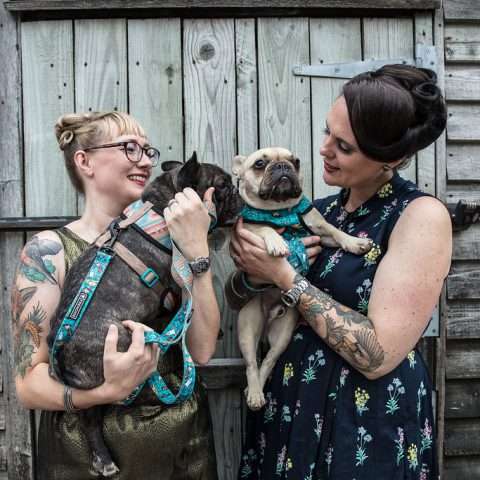 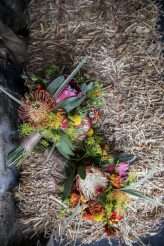 If there's one kind of wedding I can't get enough of it's ones with lots of COLOUR! I don't know about you, but seeing it all there together makes me so damn joyful. Even with the dark and moody British skies, Matt and Lauren's May wedding looks super fun, bright and sunny!

Sam and Sarah were married at Hornington Manor Farm, York in August. They hired their venue for five whole days so they could have a week-long celebration with their loved ones. "From the moment Sam asked me to marry her we were adamant that we wanted a really personalised wedding which was about us as a couple", began Sarah. "We wanted to do all the food, drink and decoration ourselves and to involve our closest family and friends in all of the preparations. We wanted our guests to feel like they were coming to our house for our wedding which we were able to do as we rented the house for five days. A summer fete theme emerged as we planned lots of activities for people to do during the day."

Childhood sweethearts Mirlah and Nik were married in June and had a colourful Mexican fiesta inspired wedding. The day also had a bit of a festival vibe with the bell tents and their laid back attitude.

OK, prepare your minds, bodies and souls for the stunning wedding that's about to grace your screens - this is not a drill! Anna and Steph's beautiful barn wedding had a focus on "Good food, good music and fun" with a colour scheme to celebrate Pride. It was natural, un-fussy, and totally, breathtakingly beautiful.