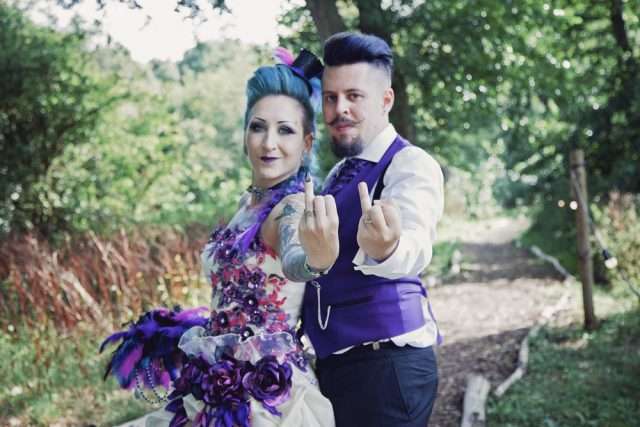 When a bride describes her wedding as “cabaret and vintage circus with a dash of Moulin Rouge and a hint of Wonderland!” you just know you are in for something truly special. Verity and Simon’s summer wedding doesn’t disappoint. They were married at Chalkney Water Meadows in Colchester. 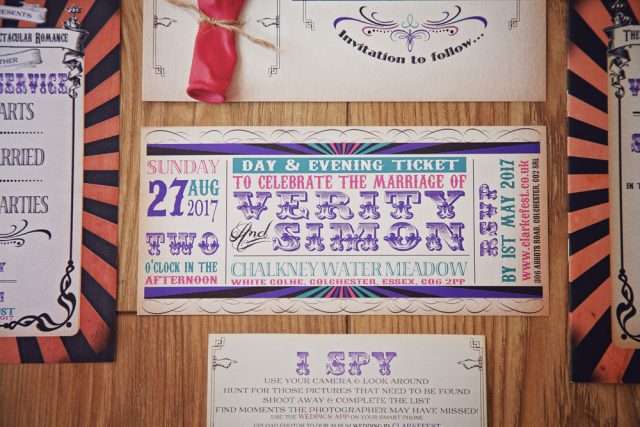 “We both love wild camping and being outdoors, so an outdoor camping wedding just made sense”, the bride began. “But we didn’t want to go for the usual ‘festival’ theme. We wanted it to reflect us, be colourful and our little piece of madness. We decided to bring together the glamour but also the weirdness of the Moulin Rouge and Victorian/ Vaudeville circuses and create our own world that our guests could step into. One of my friends said to me ‘If I could take a peek inside your brain, this is what I imagine it would look like’ and they were probably right!” 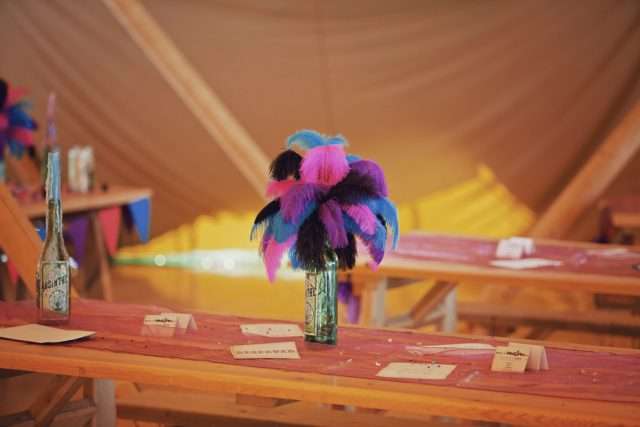 Pulling off a wedding with so much detail and thought obviously meant it took over their lives for a while there, “I vowed never to be one of those brides that’s always talking about her wedding, but you really cant help it when there’s so much to do and arrange! it takes up so much time, especially when you do a lot of things yourself. For the last six months I must have spent every lunch break on the phone or emailing contacts and arranging things and every day off covered in hot glue and feathers!” 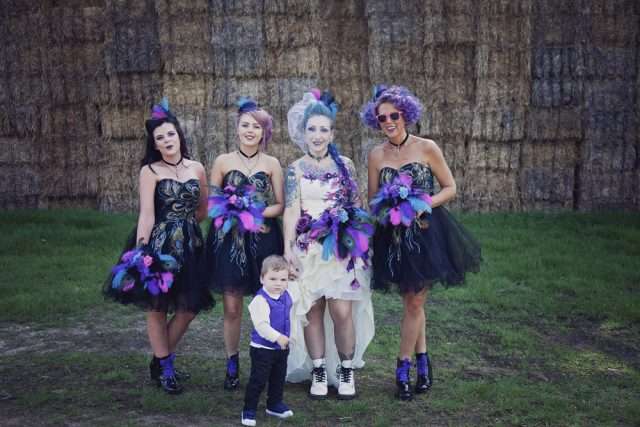 “However, I loved doing all the crafts and designing everything from scratch. It was such a fun project. The ‘glitter run’ instead of confetti was one of my favourite ideas. Simon hated me for it, but everyone loved throwing glitter everywhere and even now we are finding ‘memories’ of the day in the strangest places. It’s the gift that just keeps giving! Standing in the middle of it all on the day, looking at everything we had put together, watching everyone we love enjoying themselves and saying ‘We did this!’ was the best thing about planning the wedding. It’s actually an amazing feeling looking at everything you’ve created from scratch all come together so beautifully.” 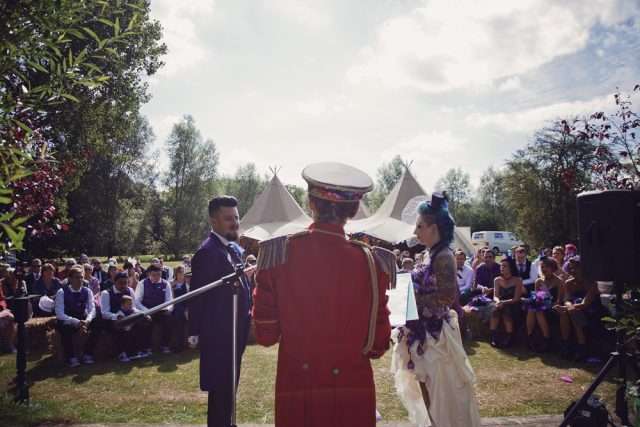 The ceremony itself was very personal, as they wrote it themselves. Their venue didn’t have a licence so they were legally married a few days before meaning they could do whatever they liked on the day. “We wrote the ceremony ourselves and gave it to Holli (a actor/ comedian/ clown who officiated!) to ‘perform’ and put her own spin on it. And that she did! It was fun, without losing the meaning of what we were doing. We asked Simon’s sister to do a reading of the lyrics of For Good from Wicked, Simon’s mum wrote a poem to read out too. We incorporated zombies, rock paper scissors, unicorns, and lots of lines from our favourite songs too. The ceremony was quite interactive, with Holli encouraging call and response from the ‘audience’ and several callings of ‘Huzzaa!!’ which became the word of the day!” 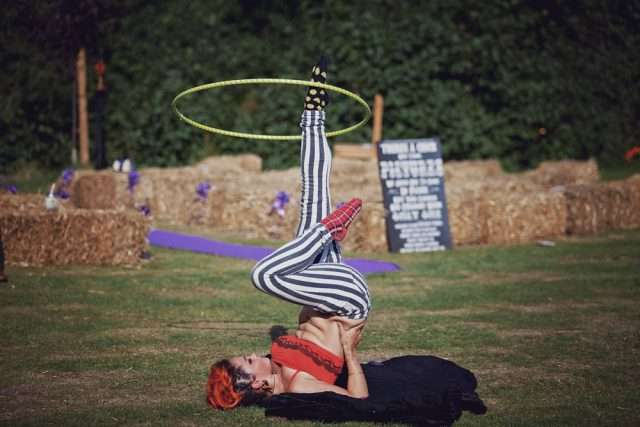 “Just as we finished giving our rings to each other, we had to pause the ceremony as a huge flock of geese flew over in formation, like the Red Arrows, from the back over the top of everyone’s heads. It was amazing, and so perfectly timed that some of our guests even asked us if we’d planned it!” 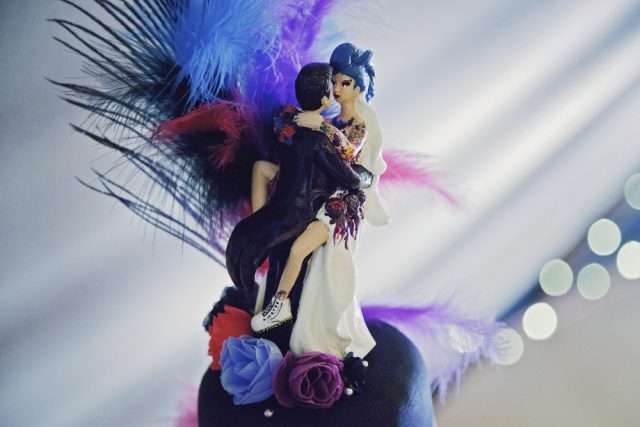 “I’d do it all again in a heartbeat”, Verity concluded. “Only I might employ a PA to take care of all the phone calls and emails for me! My advice to other couples is to make sure you get a video! Even if it’s not a professional one, task a friend with videoing the ceremony, speeches, first dance etc. We didn’t think we needed one and wanted to prioritise spending money on other things. However, a friend of ours covertly videoed all the important parts and presented us with the video a week later. There’s so much going on that it is easy to forget parts of the day and what was said. When we watched the video back, it helped us feel more like we were there and less like a dream, and we enjoyed everyone’s speeches again too. It’s a memory of the day that we didn’t realise we needed until we had it, and we are so glad we do now.” 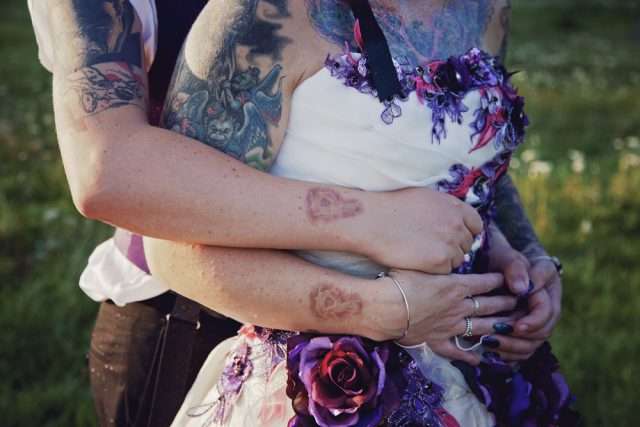 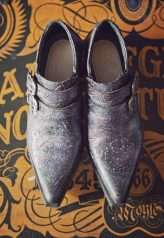 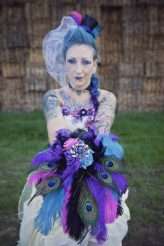 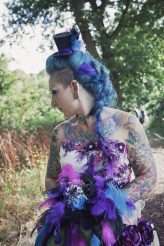