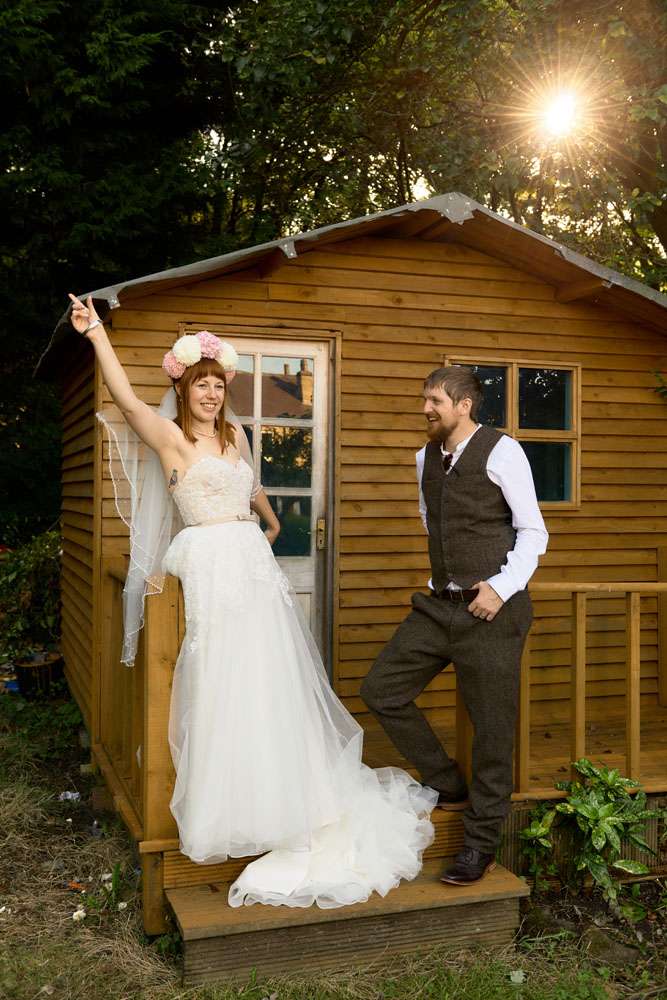 Zoe and Pidge met when they were just 13 years old! Five years later, on Zoe’s 18th birthday, they confessed their love to each other and have been together ever since. They wanted their wedding to be completely individual and really relaxed; to reflect both their individual personalities and themselves as a couple.

“We knew we wanted a really unique outdoor ceremony in our own back garden so we had a legal ceremony at the registry office in the morning, and then had another personalised ceremony in the afternoon”, Zoe said. “Our oldest friend performed the outdoor ceremony for us and we wrote the entire thing ourselves. During the ceremony we had a hand binding where we asked each bridesmaid and groomsmen to come up and bless us in turn.” 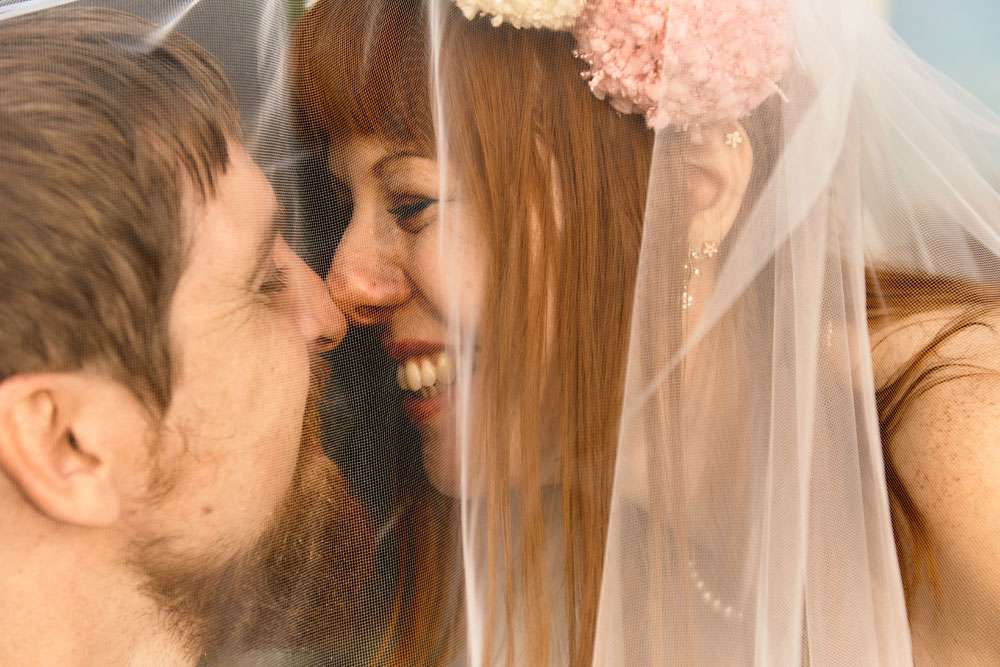 “As the wedding was at our own home we did a lot of DIY projects. We made the colourful archway for our ceremony out of a garden vine archway and paper tissue pompoms from Amazon. It took almost two days from start to finish, but it looked so amazing in all of the pictures so it was totally worth it. The bridesmaids and I wore wool pompoms in our hair which were made by my mum. We are a family of devoted knitters and I even have a tattoo of a ball of wool on my leg so I needed incorporate wool into the day somehow!”

“We also painted our own garden shed to look like the TARDIS from Doctor Who, and transformed the inside of it into a Polaroid photo booth for our guests. My mum and I did all the cakes and buffet ourselves: we didn’t want to put all the pressure on one ‘wedding cake’ so we had an entire table of different cakes, each with their own toppers!” 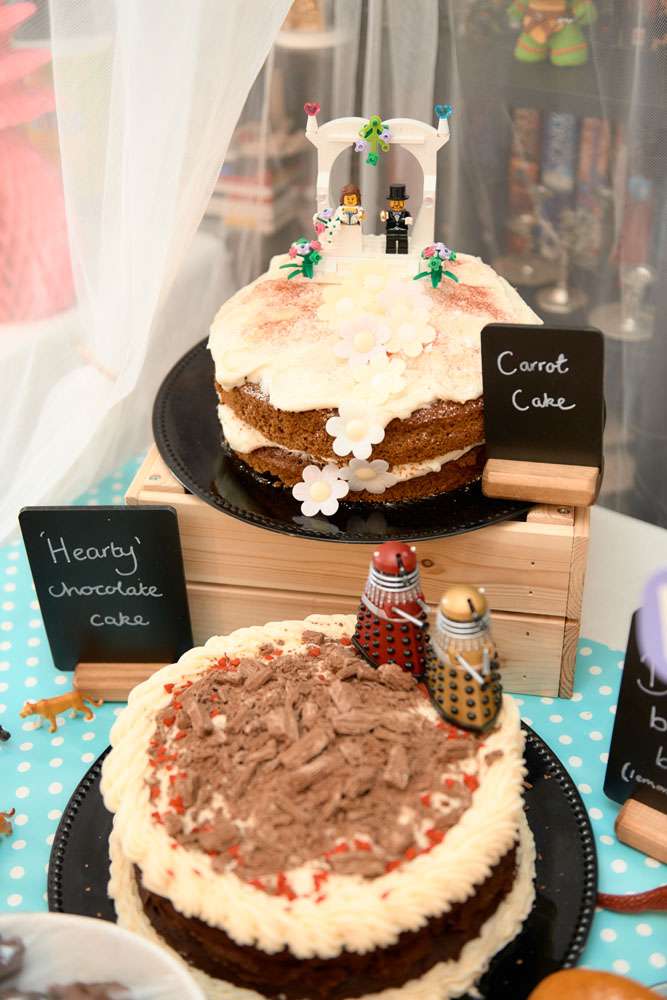 Their favourite part of the wedding was actually travelling to the registry office in the morning. “We both got ready together at home then met up with just our closest friends and family at a local hotel and all travelled to the registry office together in a beautiful vintage bus from the Yorkshire Heritage Bus Company. I wore a cute vintage style dress in the morning as I wanted to keep the suspense for the ‘real’ dress for later. But the atmosphere was just amazing. You could feel everyone’s excitement! We know it’s not traditional for the bride and groom to travel to the ceremony together, but we wouldn’t have missed that feeling for the world.”

Their biggest expense was Zoe’s dress, but it was perfect and totally worth it! “Originally I just wanted to pick up a dress from the high street, but my Mum insisted I go to at least one boutique to try on some ‘real’ dresses. I was extremely apprehensive, but I just completely fell in love with the very last dress I tried on. It had some beautiful lace daisies on it, which were my late granddad’s favourite flower. The entire family were devastated when he left us, and that was such a wonderful way to have him with us on our special day.” 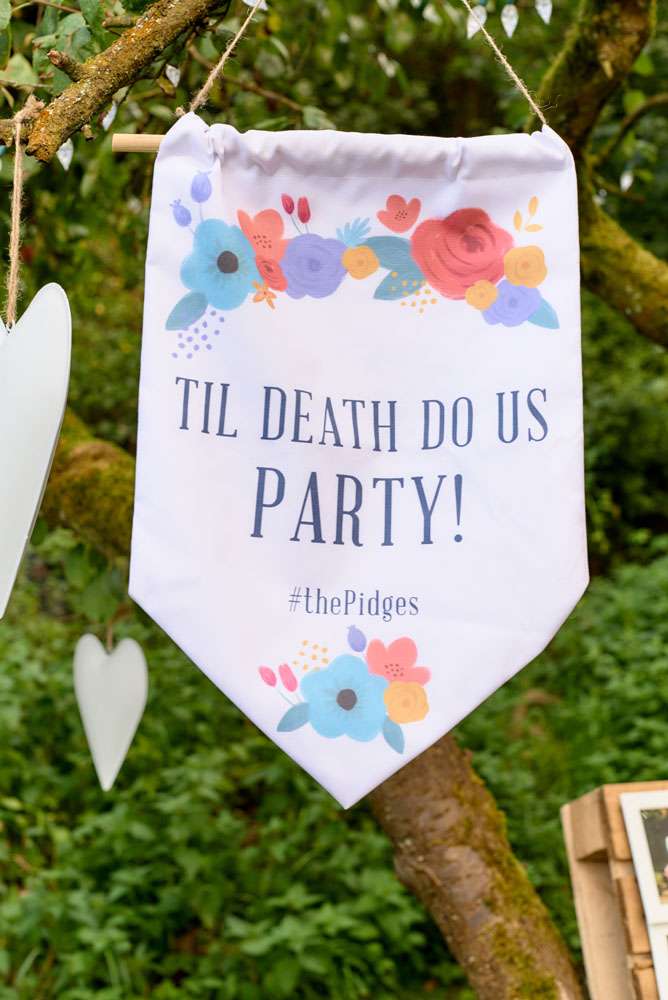 Their overall wedding budget was £5000 and they saved cash on lots of things! “We saved money on a lot of the wedding party’s outfits by ordering most of them from ASOS. On top of that, we managed to get all of the lads waistcoats, my flower girl’s dress and Pidge’s shoes in the sales. We also bought the seating as a job lot from eBay. They were in an absolute state when we bought them, but with some elbow grease, and some help from family and friends, we had them sanded, painted and renovated in no time.”

“We decided quite early on that we didn’t want any ‘formal’ flowers so I made my own bouquet out of lavender, which looked smelt amazing! We put sprigs of the left over lavender, along with some gypsaphelia from ALDI, in some beer bottles we had been collecting all year and dotted them around for décor.” 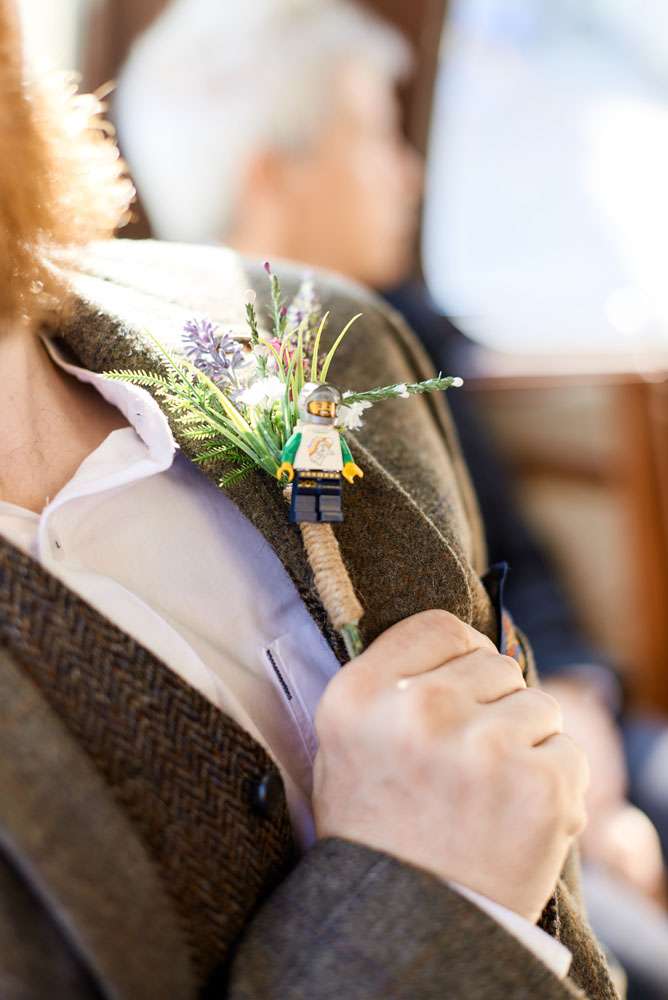 “However, the biggest saving was of course, having the wedding in our own back garden. When we first got engaged, we had a look around at a few ‘formal’ venues, and we were blown away by the prices they were charging. We still couldn’t justify to ourselves spending that amount of money on a wedding when we hadn’t even bought a house together yet. A few months went by, and whilst we were viewing houses, we stumbled across a gem with a large back garden. Before we even put the offer in on the house we had decided that was where we were going to get married!” 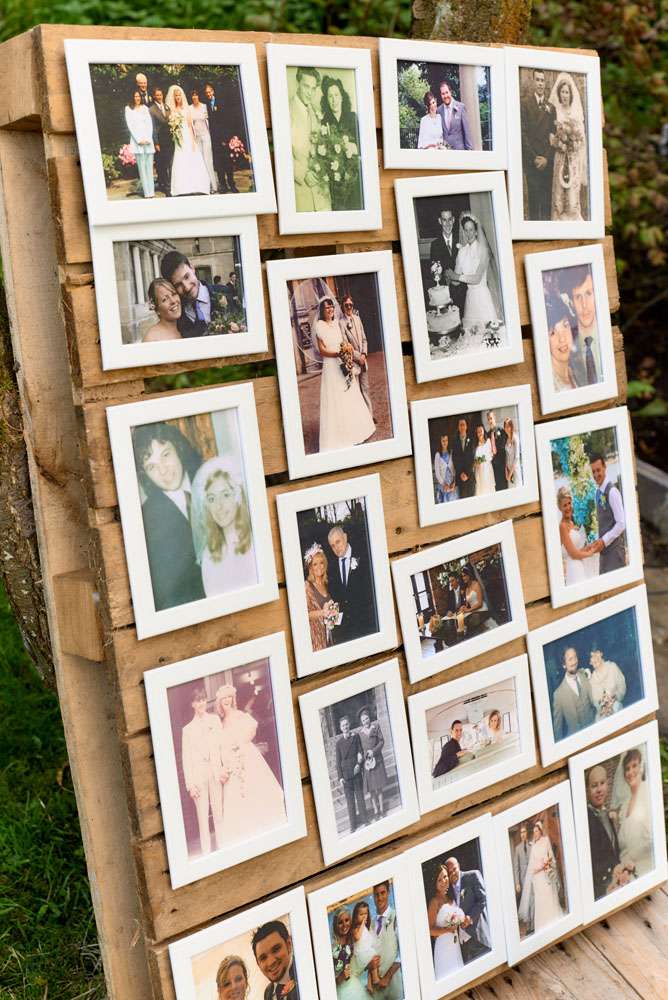 “The best part of planning our wedding was having the gift of time”, she concluded. “It was almost two years between our engagement and getting hitched. We did buy and renovate our first home in the midst of all of that. But time was such a blessing. We had a few months to sit back and discuss what we both really wanted from our day before we started actually putting pen to paper, which started us off on the same page right from the beginning. It also meant we were able to collect little bits and pieces as we went along. We had a ‘wedding box’ which ended up brimming with things we had found, collected or been given over the previous two years (decorations, cake toppers, guest books, and all sorts!) It really saved us some money. And as we had so much time, we were really calm through all of the planning.” 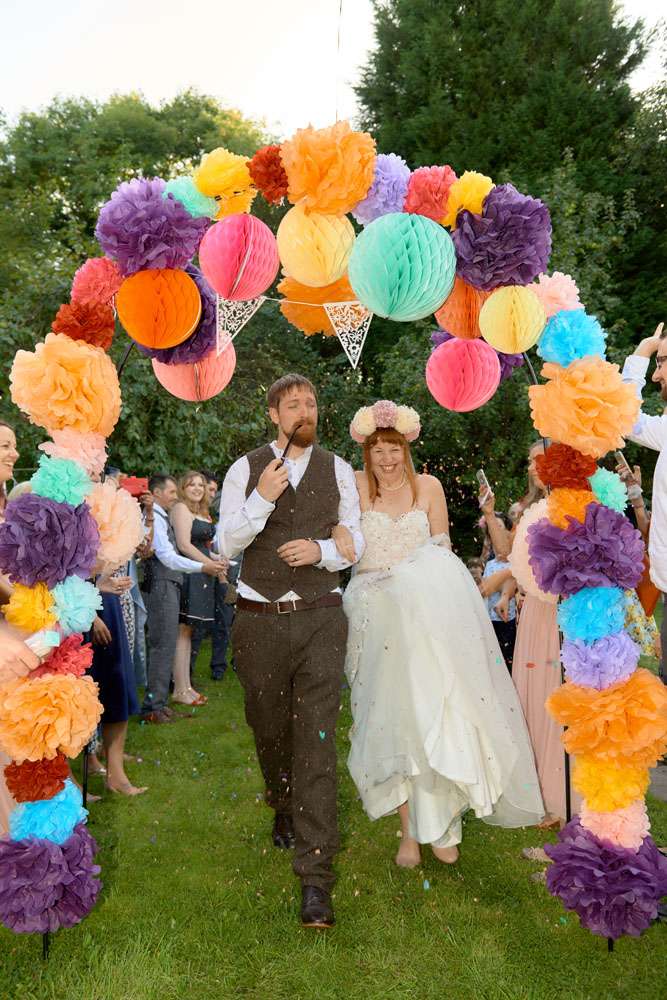 “Our advice for future brides and grooms is that if you’re nervous or apprehensive about something don’t do it! Don’t be forced to do something just because that is what you ‘should’ do. When we first got engaged, we looked around at a few wedding venues and having someone telling us what we could and couldn’t do at our own wedding made us so anxious. So we decided to have it in our own home so we could do whatever we wanted.” 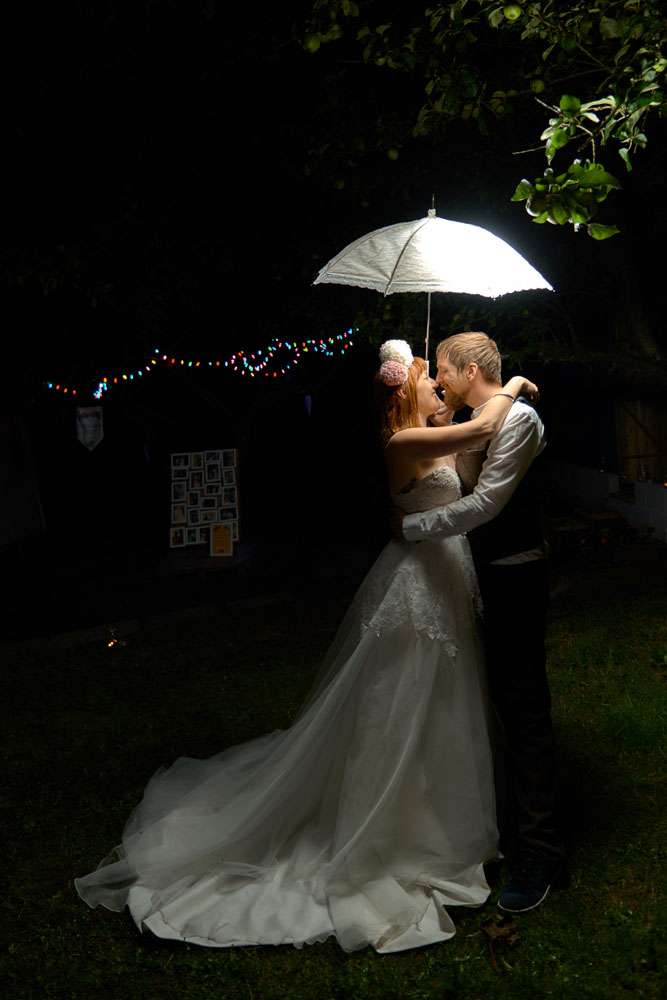 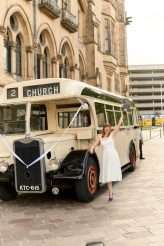 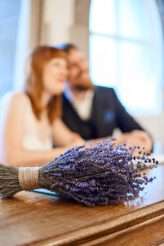 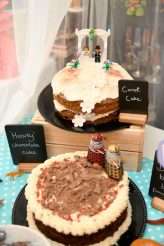 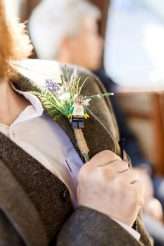 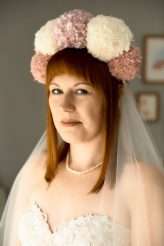 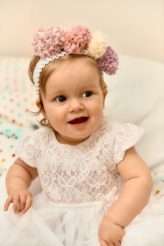 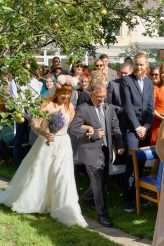 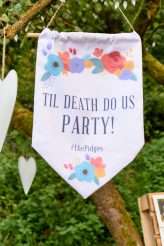 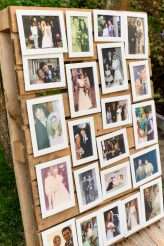 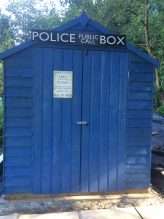 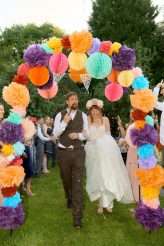 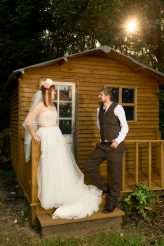 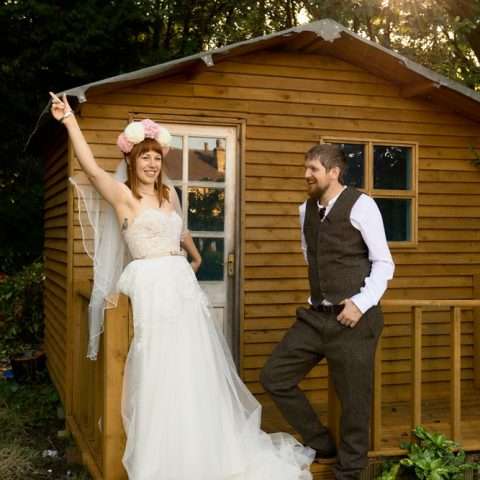 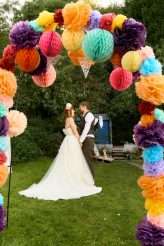 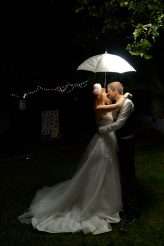