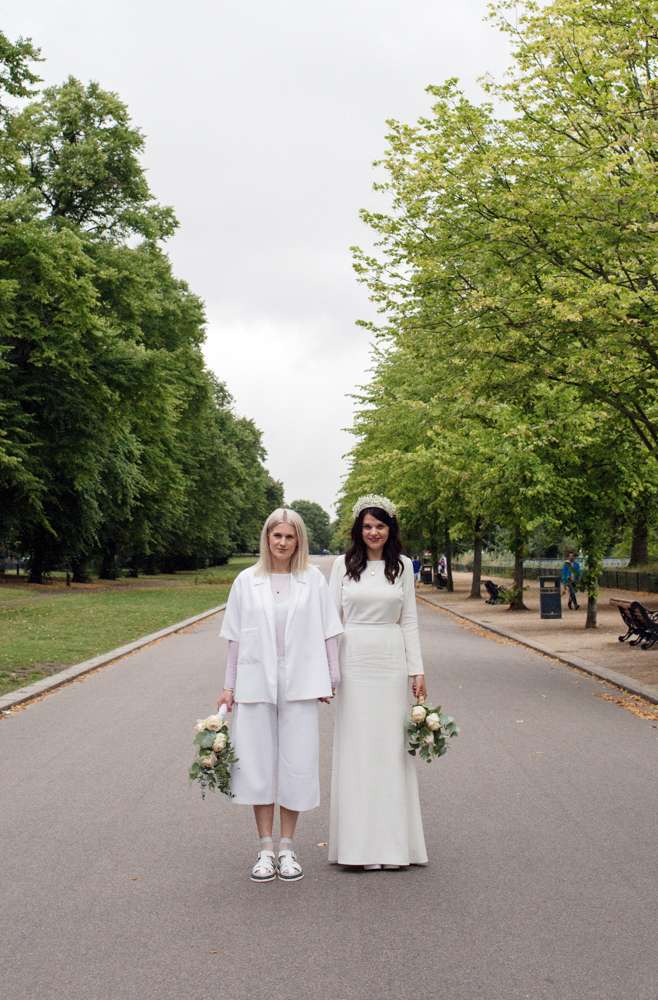 Laura and Lauryn’s wedding was inspired by their loved ones. They had their friends help them wherever they could, but not in traditional roles. One friend made Laura’s dress, another made Lauryn’s and lots of others helped out with decorations.

“We didn’t have bridesmaids or people in traditional roles” explained Lauryn, “but we liked the idea of highlighting a few people who went the extra mile for us so we named our house cocktails after them! We had the Bekgarita, the Hanna-lol Spritz, the Cosmic Emelie and the Papprihinia.” 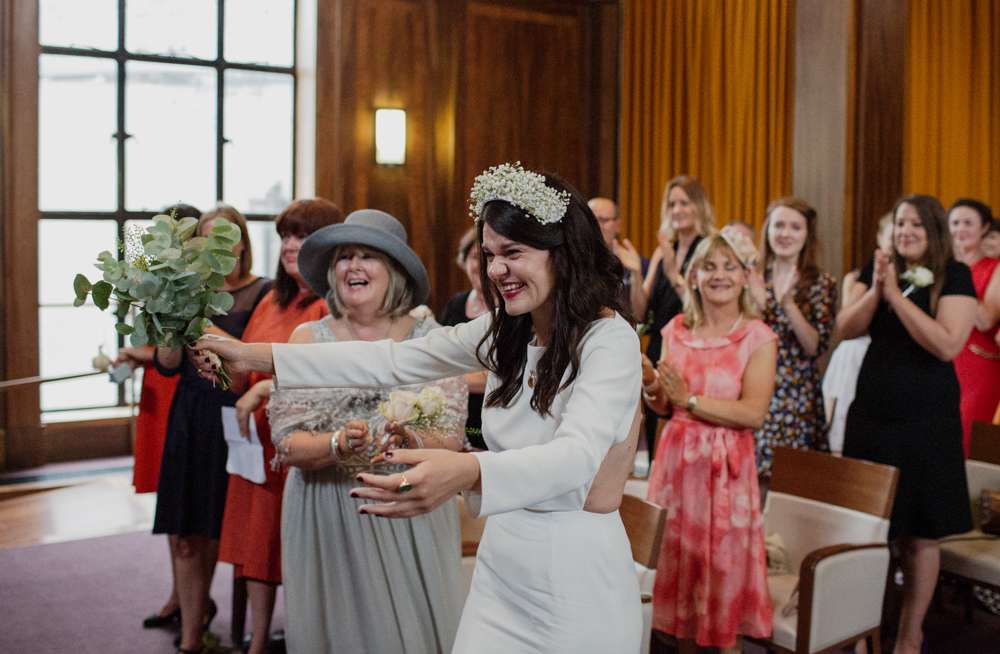 “My dress was made by my best friend Bek who works in fashion” she continued. “I drove her absolutely insane talking about ‘the vision’ of what I had in mind. I think ‘the vision’ will haunt her forever! In all seriousness though, I can’t underestimate how much she did for me and how special she made me feel. I’ll probably never again have the opportunity to own something so beautiful, that was one-of-a-kind and made just for me.” 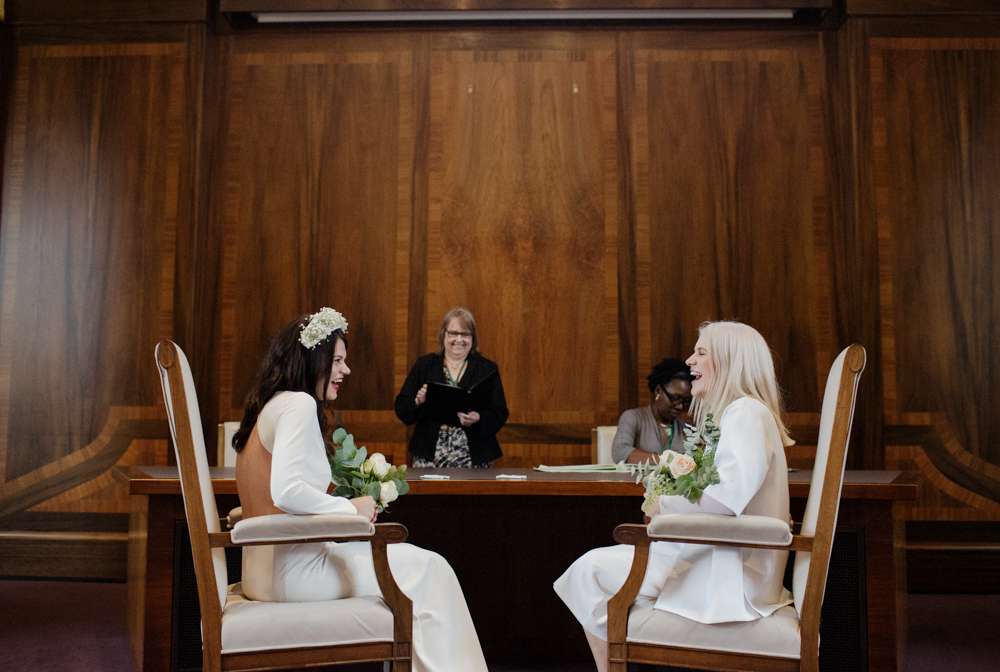 “Laura’s outfit was, again, made by one of our best friends, Hannah. She was an absolute superstar considering the brief was a tricky one – modern, no dresses or skirts, and no-white three piece Vegas-Style suit!” 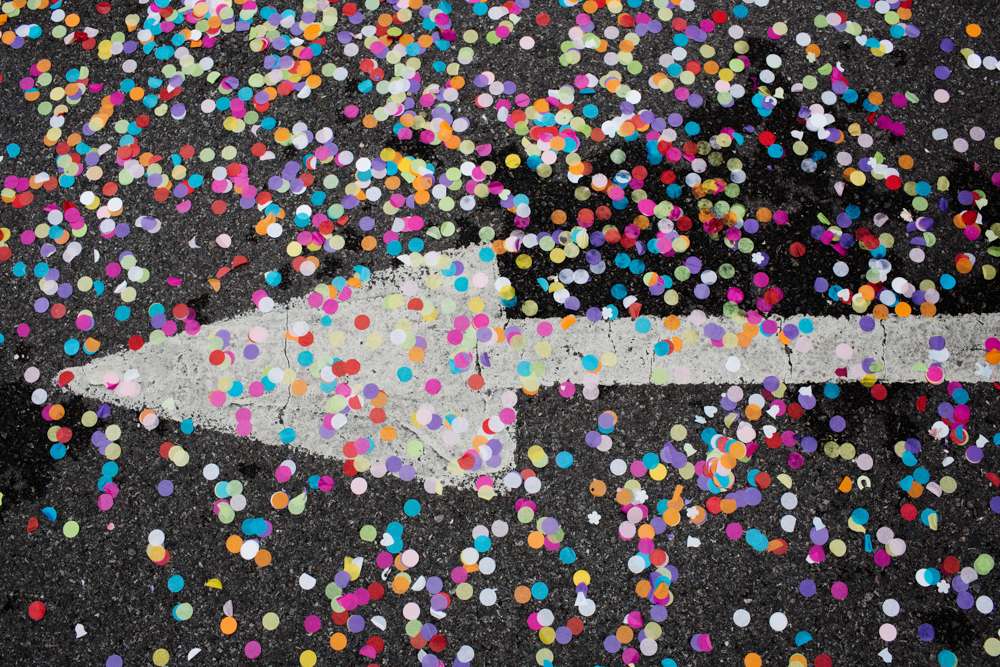 For their flowers Lauryn decided to DIY them herself, “I work next to Leather Lane market, so I just approached a flower seller there to buy rosemary, eucalyptus, lavender, and anything that smelt good in bulk” she said. “I had a brilliant few days at work after everything had been delivered when my office smelt like a meadow. We tied everything in bunches and secured it with string, ready to hang from the ceiling at the venue. Then, a few days before the wedding, I took my mum and mother-in-law to the flower market to stock up on fresh flowers. We then spent the rest of the day arranging them in various pots, jars, vases that we had or borrowed.” 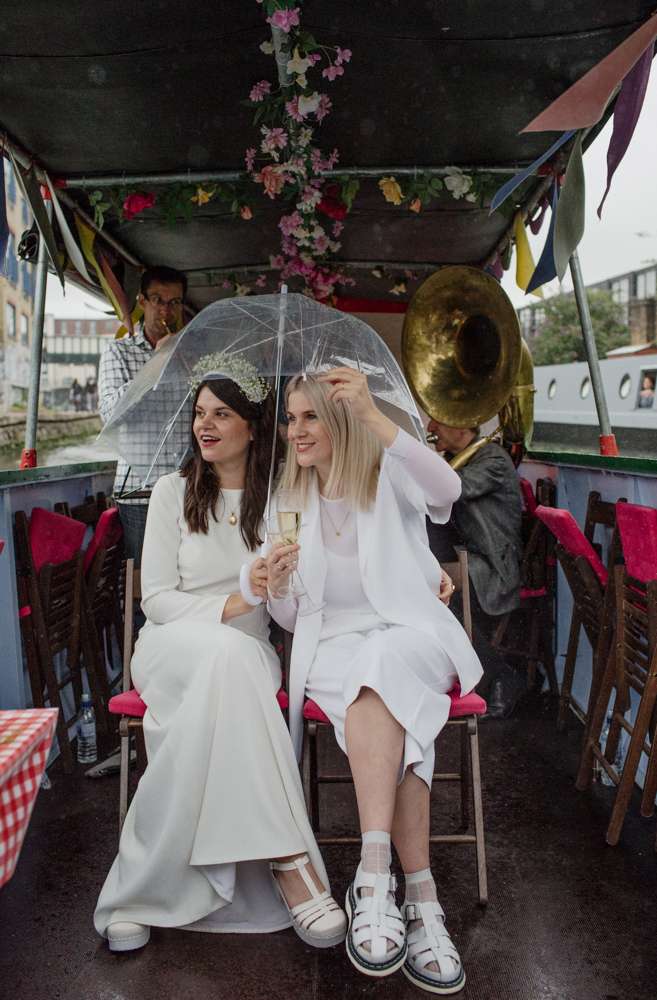 The best part of the day for the couple was the ceremony, “We actually put relatively little thought into it the ceremony as we just saw it as a formality before the huge party, but in the end it was both of our favourite moments. Nothing can prepare you for the huge whoosh of emotion which smacks you in the face when you see each other on the aisle. We didn’t know of any readings so instead we decided to have our favourite Fleetwood Mac song read out by Laura’s sister, Jo. It has great memories for us so felt exactly right.” 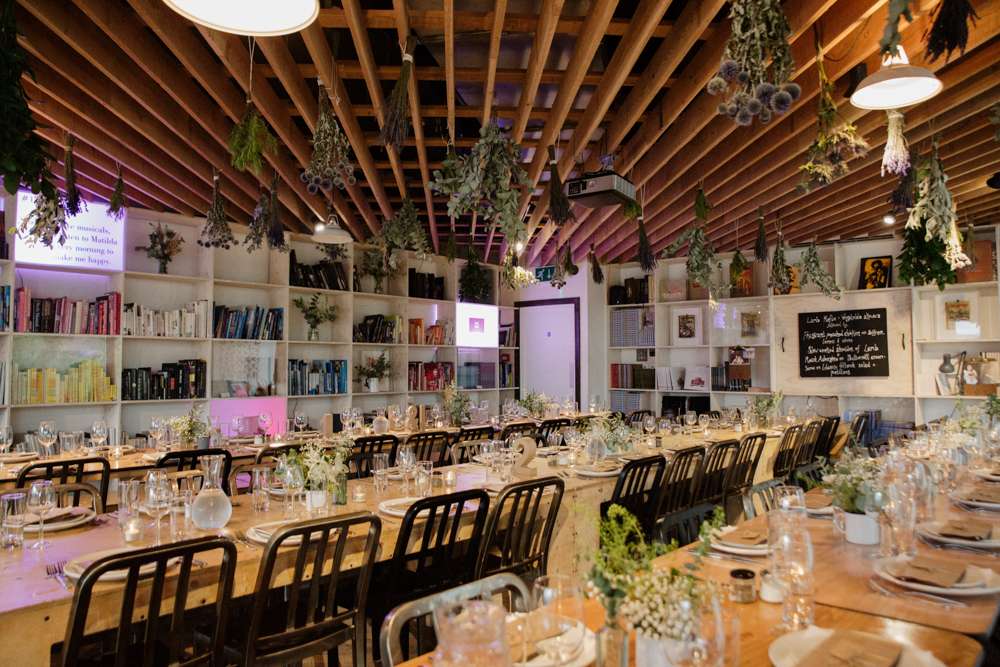 One of the most unique things about the wedding was the wedding transport from their ceremony at Stoke Newington Town Hall to their reception at The Proud Archivist. They hired a canal boat! “We searched for AGES to find a boat that would do this journey for us and got lucky with Barb and Denise. They were ace and gave us a lift from the ceremony, right up to the door of the reception venue. They even had a brass band play us on the ride. We had the Gold Diggers Brass Band who were brilliant! They were set up and ready for us to anchor away as soon as we arrived and played through the rain. We have the most amazing memories of people on the towpath dancing along with us, enjoying the music and celebrating with us.” 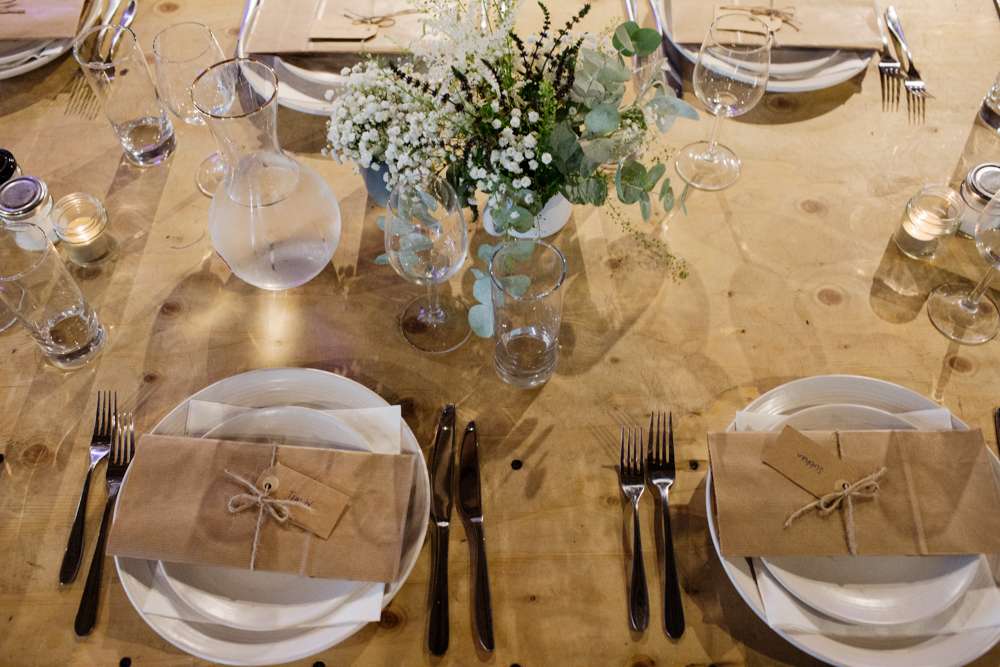 The couple’s biggest expense was the food and drinks however, they saved money by having friends help, “Our friends did so much for us”, Lauryn concluded. “They made our wedding outfits, rings, invitations and decorations. So our advice for future brides and grooms is to get very clever friends who can help you out!” 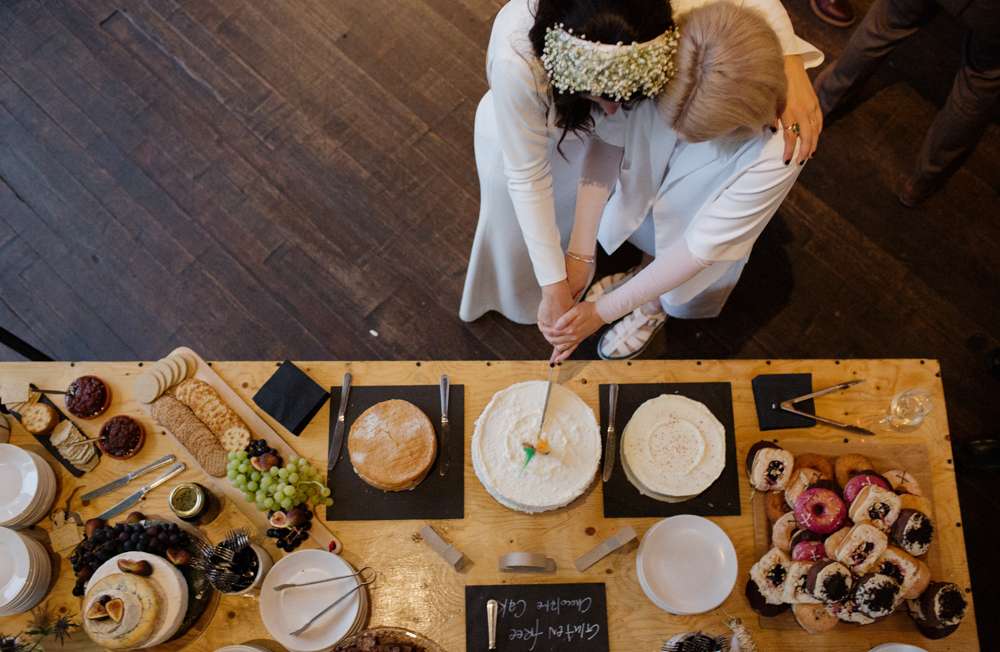 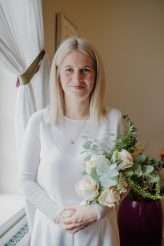 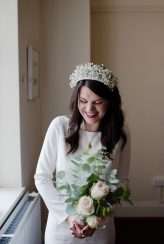 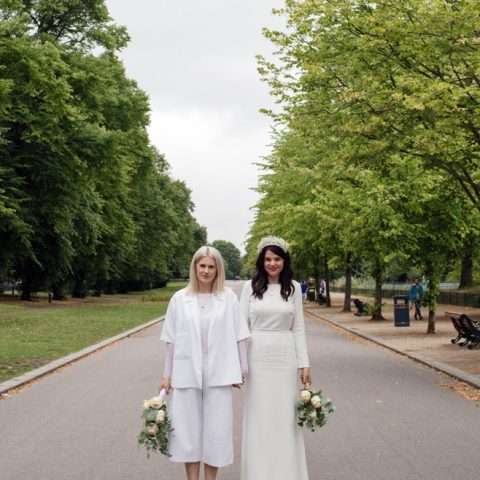 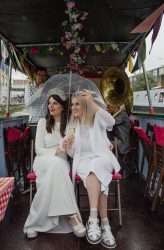 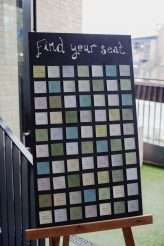 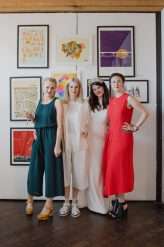 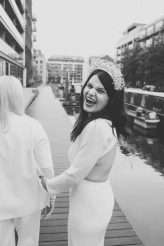 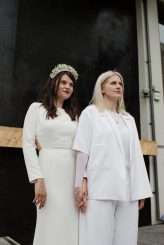 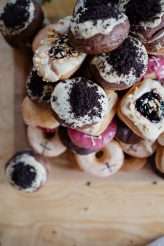 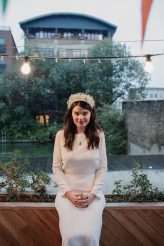 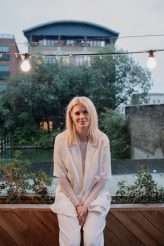 With gay marriage becoming legal across the whole of The United States and London Pride taking place this past weekend, this has to be the perfect time to share Chris and Russ' fun-filled London wedding! They were married in February at Islington Town Hall, followed by a meal at St John’s Tavern and an evening reception at The Star.

Lisa and Jemma met in London, almost nine years ago when Lisa was a personal trainer. Four years later they were training for their first marathon together - a fundraiser for pancreatic cancer, which Jemma lost her father to that year. Running helped her cope, and it soon became their favourite thing to do together, completely occupying their weekends with training, followed by several G&Ts and a good pie. They wanted their wedding to reflect all these things that they love; running, London, pie, Haribo and gorgeous friends.