With gay marriage becoming legal across the whole of The United States and London Pride taking place this past weekend, this has to be the perfect time to share Chris and Russ’ fun-filled London wedding! They were married in February at Islington Town Hall, followed by a meal at St John’s Tavern and an evening reception at The Star. 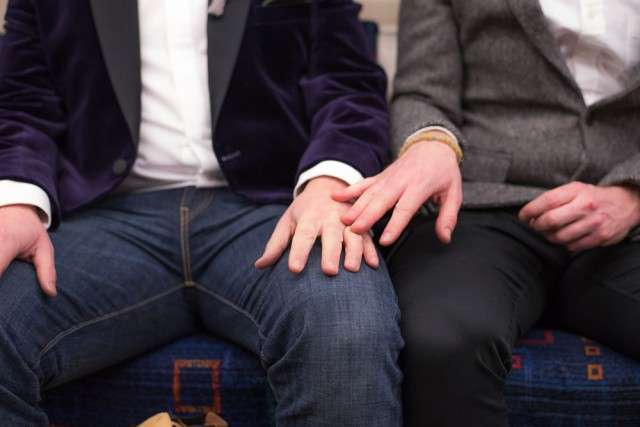 “We met in a pub in Camden in 2008”, they told me. “Russ is a Londoner and Chris, a Hullensian. Russ said, ‘You can tell you’re not a Londoner, because you’re smiling.’ The next night we met up in St John’s Tavern in Archway. It is a fantastic pub that really looks after its customers. As the place of our first sober encounter, we have a deep personal connection with it, and it had to have a key role in our wedding.” 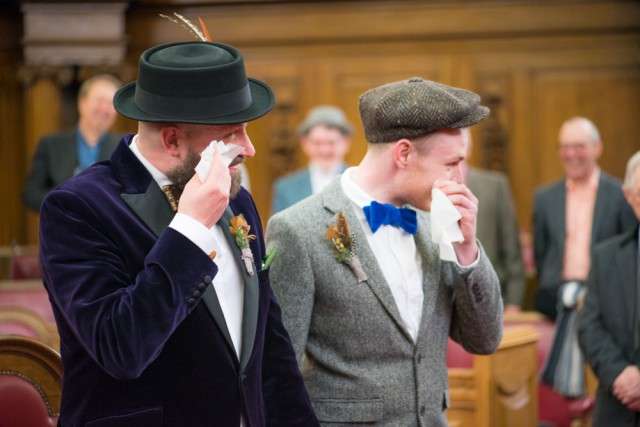 “We wanted our wedding to be the best day of our lives, and it was. We achieved this by eschewing tradition, making a commitment that everything should be sourced locally, and by making everything relevant to our daily lives and backgrounds. Propinquity was of core importance to us and made the day very special – community members seeing us walk to the tube on route to the Town Hall and shouting their best wishes as we did – staff in Map Gift shop waving as we arrived at the pub – the hairdresser that let our photographer Winston stand on their window ledge to take a group shot – our photographer Winston himself (he’s a good friend) – the locals in St Johns who helped us finish off our wine before heading to the evening venue… having things made by family and friends was also very touching and meaningful. Aaaand it kept us within budget.” 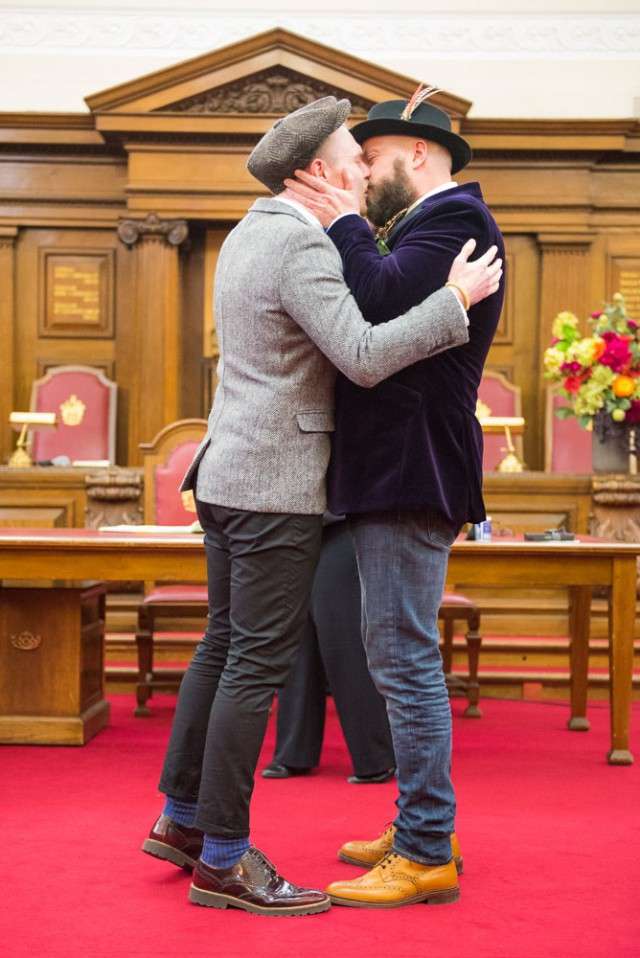 “The overall theme of the day was North and South, hence the ceilidh and cockney knees up”, they continued. “Chris’ family has a publican and seafaring background and so folk singing and dancing are a common feature at Wilson events. Cockney knees ups are a family tradition for Hackney-born Russ, who has memories of whole pubs emptying out into relatives’ houses for a sing along.” 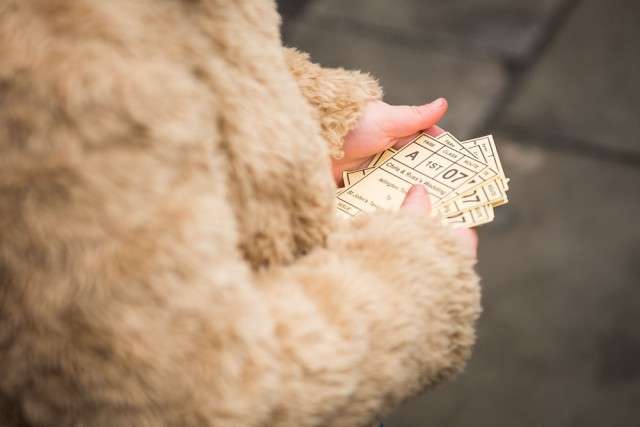 “After the ceremony we boarded a traditional Routemaster and made a boozy tour of London, stopping on Waterloo Bridge for a swift photo, before arriving at St John’s for the wedding breakfast. It was a freezing day and the roaring fire and candlelight of the cavernous yet cosy gilt ceilinged restaurant at the back of the pub embraced us heartily. The food selection in St John’s was based on our favourite meals over the years, and Trudy and her staff made it very special for us. The formal dinner was finished off with sharing platters of tarte tatin, which made it rustic and intimate.” 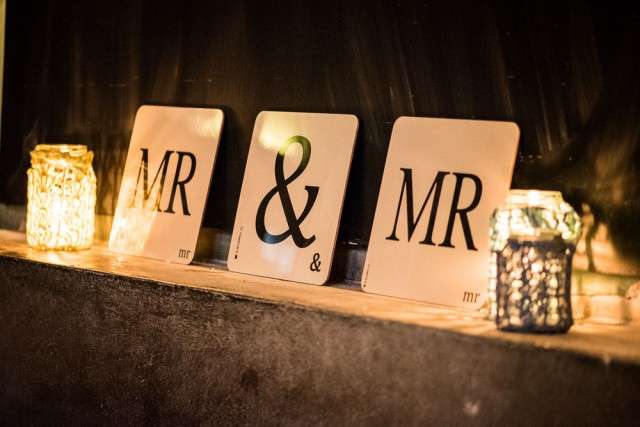 “After dinner Russ gave his speech, and the party picked up the crocheted lanterns from the tables and walked the 300 yards to the next venue, The Star. Chris gave his speech and we cut our amazing Hull City AFC and Tottenham Hotspur FC themed fruit and stout cake. The ceilidh and knees up kicked off the evening’s rousings. The ceilidh was ingeniously de-gendered by the caller Pete Truin who lined us up as Northerners and Southerners. Baz and Dave got everyone on their feet singing and dancing to boogie-woogie classics.” 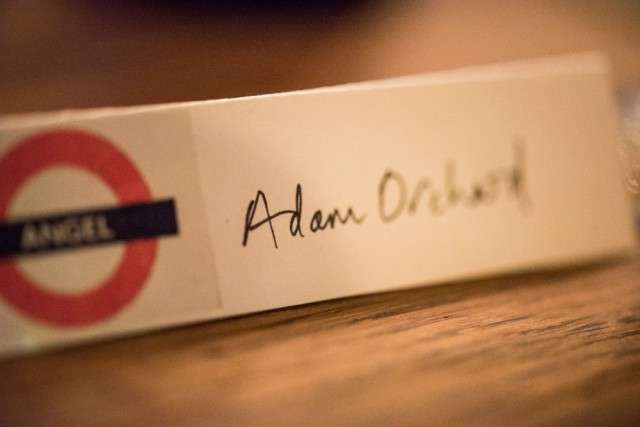 “The day pretty much went as planned, because of our intuitive and attentive ushers Rob and Adam”, they concluded. “The only issue was due to Chris losing his buttonhole between our flat and the tube. Winston came to the rescue by tracing where it had fallen based on the pictures. This unexpected event meant that we had a madcap run up and down escalators on the underground with Chris’ daughter Cecyli to get to the Town Hall on time. We got there with seconds to spare, with help from a well-wishing black cabbie, to be received by a receptionist who said, ‘So you’ve gone for the gay wedding option have ya?’. The laughter that ensued is caught on camera.” 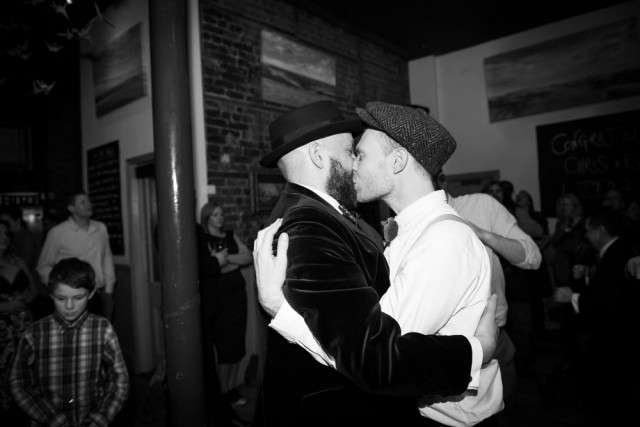 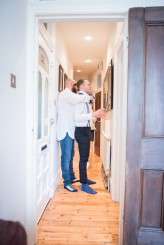 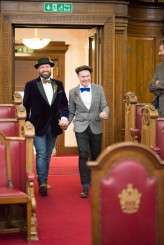 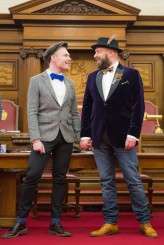 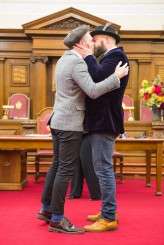 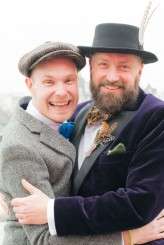 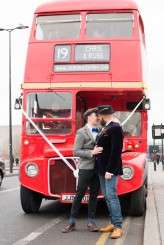 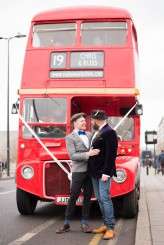 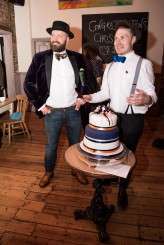 Laid Back London Wedding at Asylum

Keir and Donna were married in London. "Keir proposed on a night bus from Elephant and Castle", the bride began, "and it was perfect for us. We didn't have any particular inspiration or theme for the wedding, we just wanted to do something in London that was simple and involved all our friends."

Canal Boats, Cocktails and a Lot of DIY

Laura and Lauryn's wedding was inspired by their loved ones. They had their friends help them wherever they could, but not in traditional roles. One friend made Laura's dress, another made Lauryn's and lots of others helped out with decorations.