Sami and Aaron were married at Elysian, a private garden sand event space in Los Angeles. The venue definitely inspired their theme which ended up having a garden vibe with urban touches.

“We got married in a really beautiful outdoor garden area”, said the bride, “and that inspired the design and colour scheme that we chose. Our beautiful ceremony was written by my friends, Craig and Brenda, that happen to be incredibly talented, published poets. We knew we wanted to have a friend officiate us and they immediately popped into my head and they were perfect.” 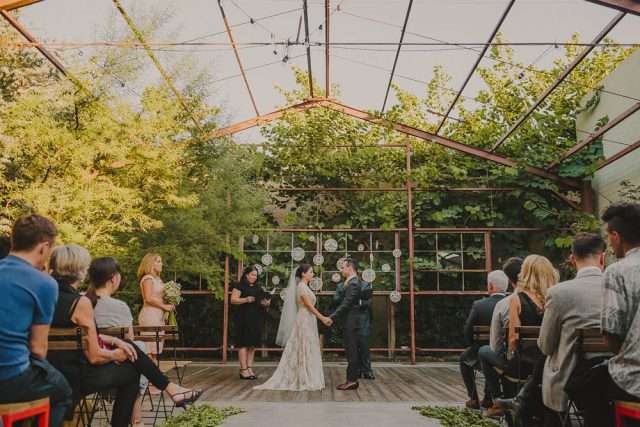 “You can’t tell by the photos, but it was 108 degrees outside! Literally it was the hottest day of the year! So the ceremony was a perfect length, about 20 minutes, considering, and everyone was very patient and enjoyed it very much which was great to hear! Because it was so hot out, we decided against doing ‘first look’ and opted to see each other for the first time at the ceremony. Leading up to the wedding I kept asking Aaron if he would cry during our vows. He is a very sensitive man, but not a huge crier, so mainly I was joking. But when I walked up the aisle and we saw each other for the first time, I saw tears in his eyes and I said, ‘Don’t you do this to me!'” 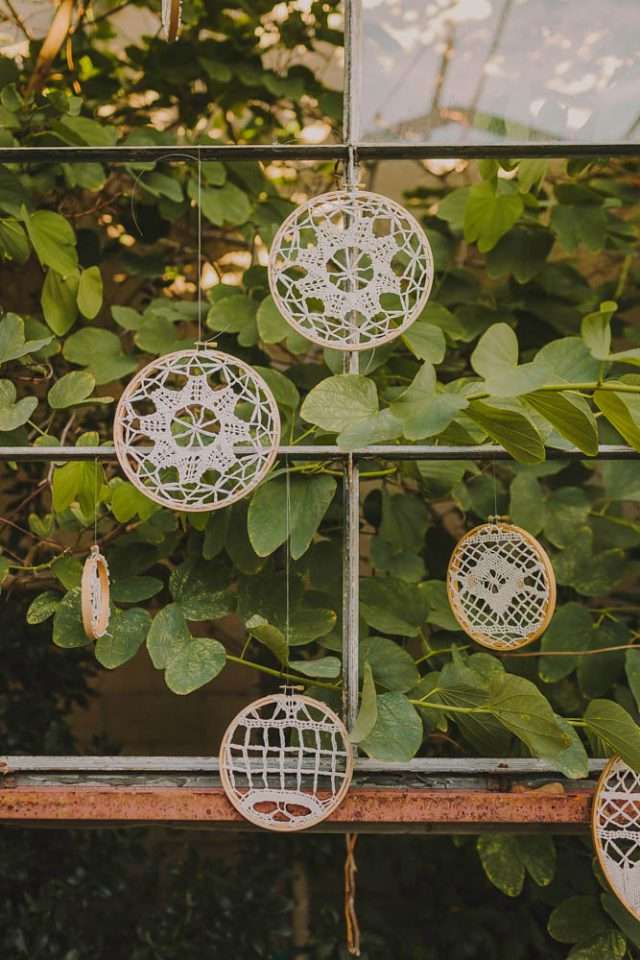 “We had a pretty cool, interesting mix of people there because our friends and family are awesome!” she continued. “Also, this isn’t necessarily about our wedding but it’s about our marriage; we both took each other’s last names so I went from Sami Akbari to Sami Akbari-Mort and Aaron went from Aaron Mort to Aaron Akbari-Mort. I love that.” 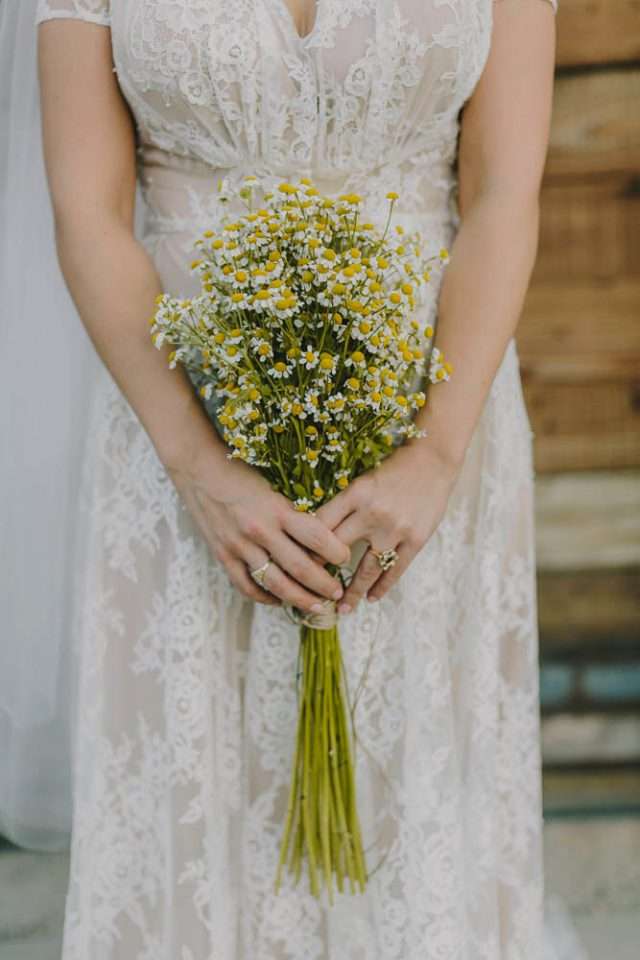 They did lots of DIY particularly on the flowers which were bought from a flower market and put together by the groom’s parents. “My mother-in-law was so helpful with all of the decorations. She put together those beautiful lace hoops that hung behind us at the ceremony which I loved and thought looked so perfect for the scenery. My in-laws did all of the flower arrangements. Aaron designed all of the save-the-dates and invitations and also screen printed each invitation by hand which was so special. We also did all of the wedding gifts by hand. We got a stamp made and stamped little burlap bags, put coffee in them and my mother-in-law sewed each one. We also did all of the name tags for everyone’s seats.” 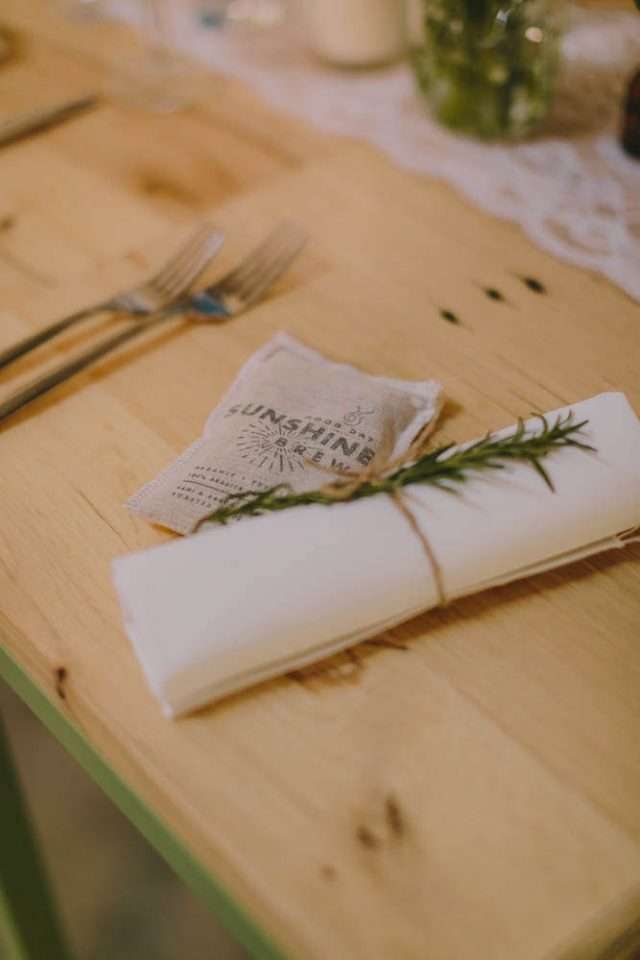 “It was the perfect day but there are a few things that in retrospect we would have done differently”, she concluded. “Initially I think I was a little impatient at the beginning of the
planning to get things sorted so I would get a quote from a venue and dismiss it without doing further research. Like, for example, what does that price include? Some venues include a lot with their initial rental price, and others don’t. Our venue was at a lower price initially, but there were a few things that we were required to have that added up to about the same cost as other venues I had initially dismissed. That being said, our venue was lovely, and beautiful and a really great setting for a wedding. Moral of the story though, do you research! Also, I was pretty anti-doing things super traditionally, but I do wish we had a first dance.” 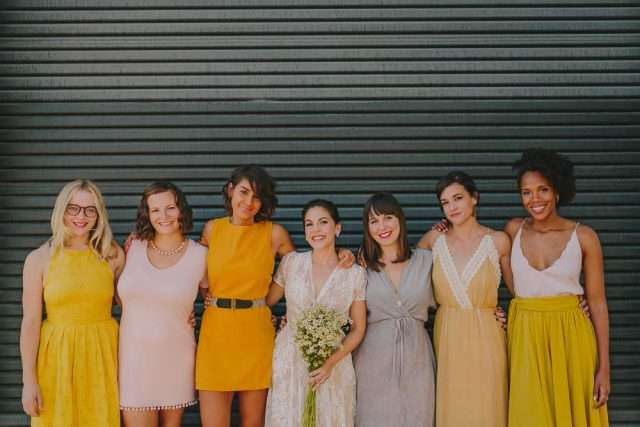 “One last thing I would say is; don’t assume you can drink the same amount of alcohol as you can normally drink! After being in 108 degrees all day, adrenaline rushing, and not eating quite as much as you think you’ve eaten, you may or may not end up puking into a Tupperware container on your wedding night!” 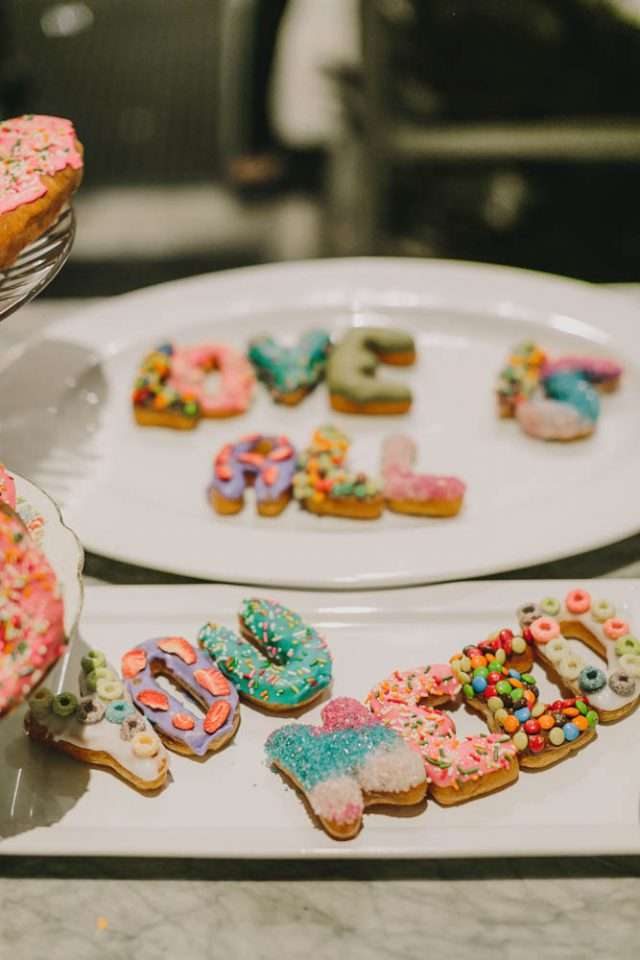 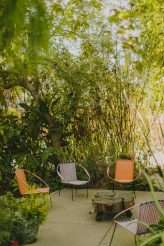 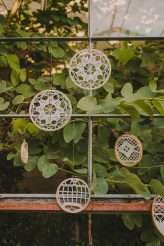 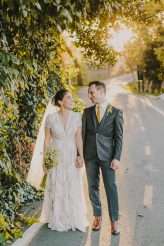 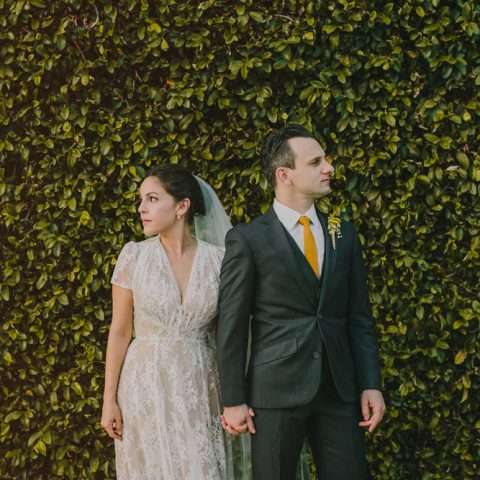 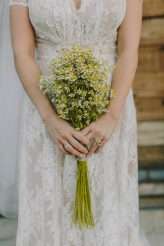 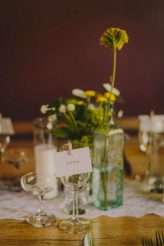 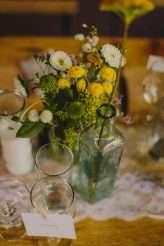 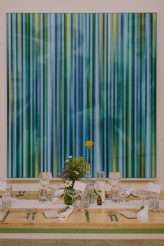 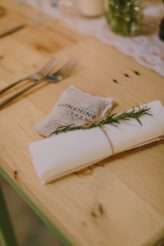 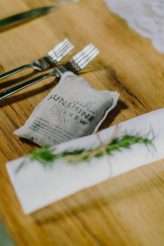 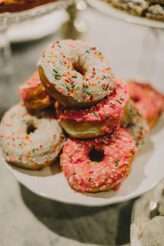 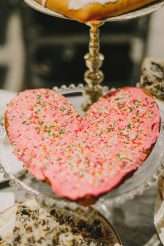 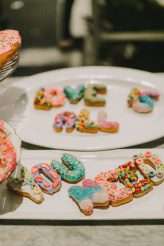 In the words of the lady herself, I am so titstastically excited to share Britt & Mike's wedding with you today. I have literally been on the edge of my seat since July in eager anticipation of seeing their wedding photographs. Most of you will already know Britt, the kick ass, controversial and Rock n Roll heavy-weight behind the the Bowie Bride blog. Words really can't express how awesome this chick is and how much I totally adore her and her killer blog.

John and Lucy were married at Larmer Tree Gardens in Wiltshire in September. They chose it because it had the pretty outside space that they wanted, and they were able to say their vows outside (which isn't always possible in the UK!) in their covered pavilion. "We are both artists, I paint and John is a photographer, and we are both deeply inspired by nature", said Lucy. "I am also borderline obsessed with the vision of an enchanted forest so we wanted our wedding to feel like a blurry childhood memory of a place that was so beautiful and fantastical that you're not sure whether it was real or not. We fell in love with Larmer Tree Gardens the minute we clapped eyes on it. There were peacocks and parrots roaming around so we used a loose theme based on the colours of the peacocks plumage by having the boys in teal and the girls in royal blue."

Both lovers off Tolkien's Lord of the Rings, Hannah and Derek wanted their Portland wedding to transport their guests to Middle Earth. The theme was a botanical woodland and the day was unique, intimate, and moody, while reflecting their Oregon roots.

Spanish-born Vero and Agus had been living in London for five years before their wedding so they wanted to bring a bit of 'Britishness' into their wedding back home. They chose their venue, Jardín Müller in Granada, because it reminded them of the gardens in the UK.