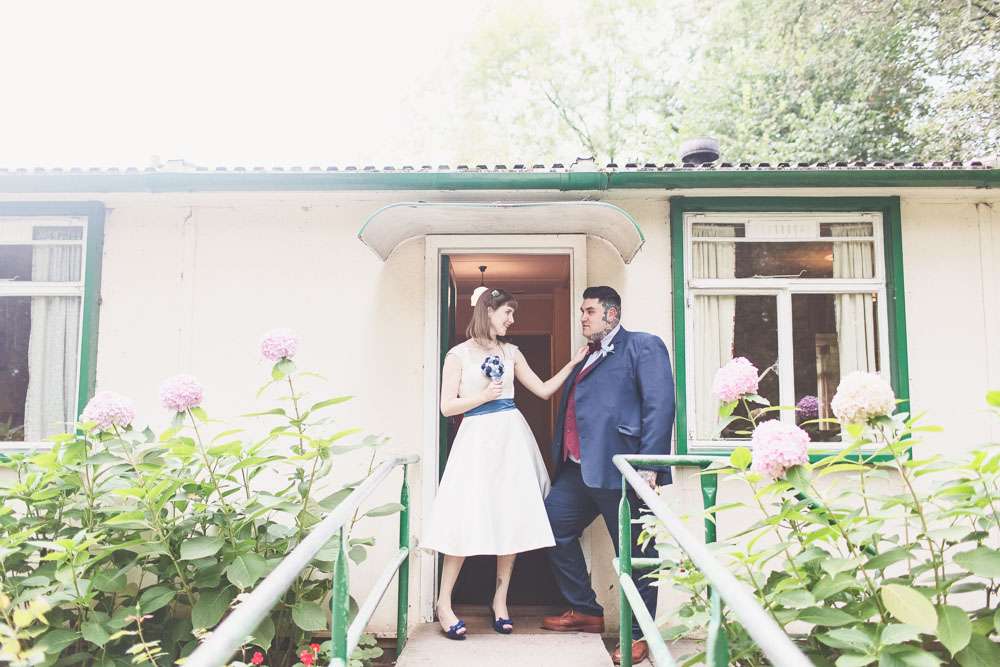 I often get asked what the most alternative wedding I’ve ever featured is. As while there are some that always stick out in my mind (killer Vegas elopement, bride in a coffin, surprise ceremony!) that’s not really what Rock n Roll Bride is about. Yes, I love the crazy, unique stuff, but I equally adore the cute little weddings where it’s clear the couple have put their heart and soul into it, and planned a wedding that truly reflects them. That’s exactly what Kieran and Sarah did and the result was gorgeous. 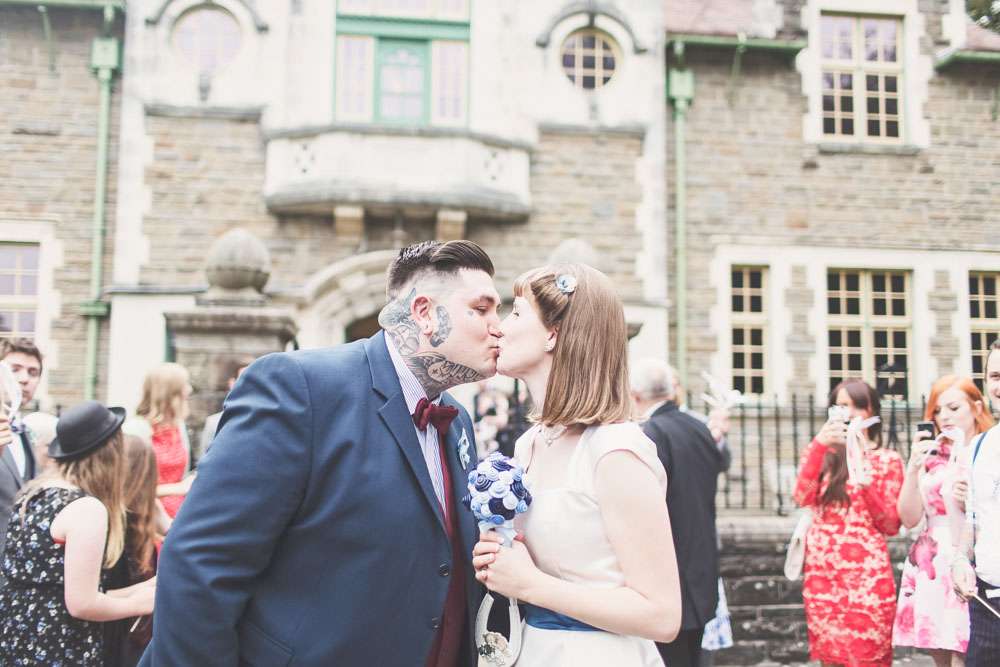 They were married at Oakdale Workmen’s Institute in the National History Museum in Wales. “We wanted the day to be as laid back as possible so the first thing we decided was that we didn’t want a seating plan and that we wanted big long tables”, began Sarah. “We also wanted it to be as DIY as possible too, so I took to my sewing machine and tried to make as much as I could.” 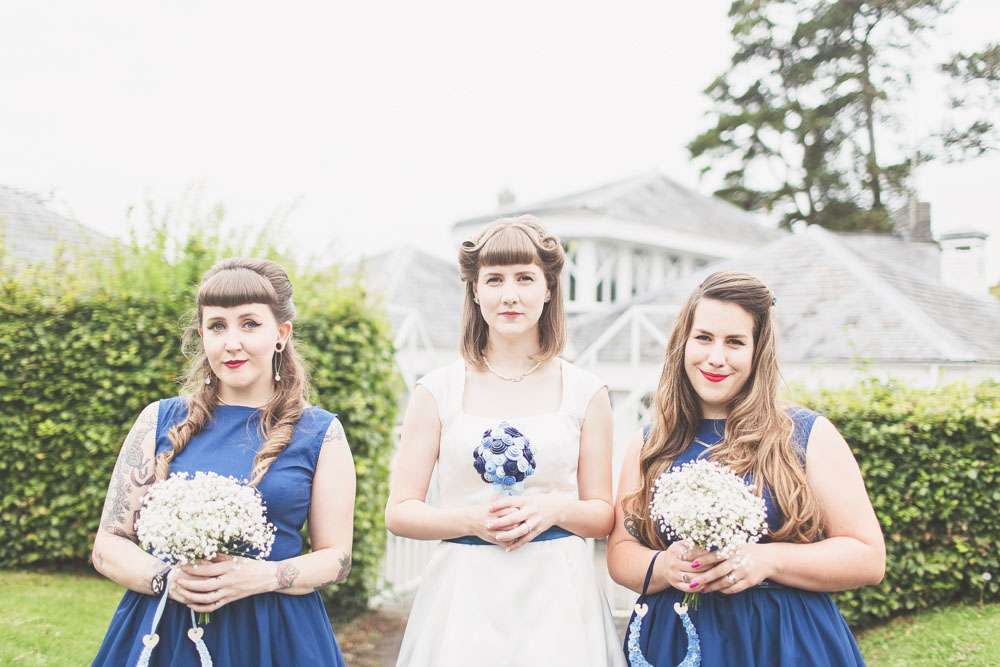 “I made the 26ft hessian table runners to and the 90 bow ties for the jars for our drinks reception. I also made 70 metres of bunting (which I’d never made before!) and I sourced all of the sweet jars so we could have a table full of sweets. I also found all of the books and cameras for the centrepieces. Kieran works as a Tattooist so does a lot of painting in his spare time. He did paintings for both our save the date cards and invitations which were then printed through Vistaprint.” 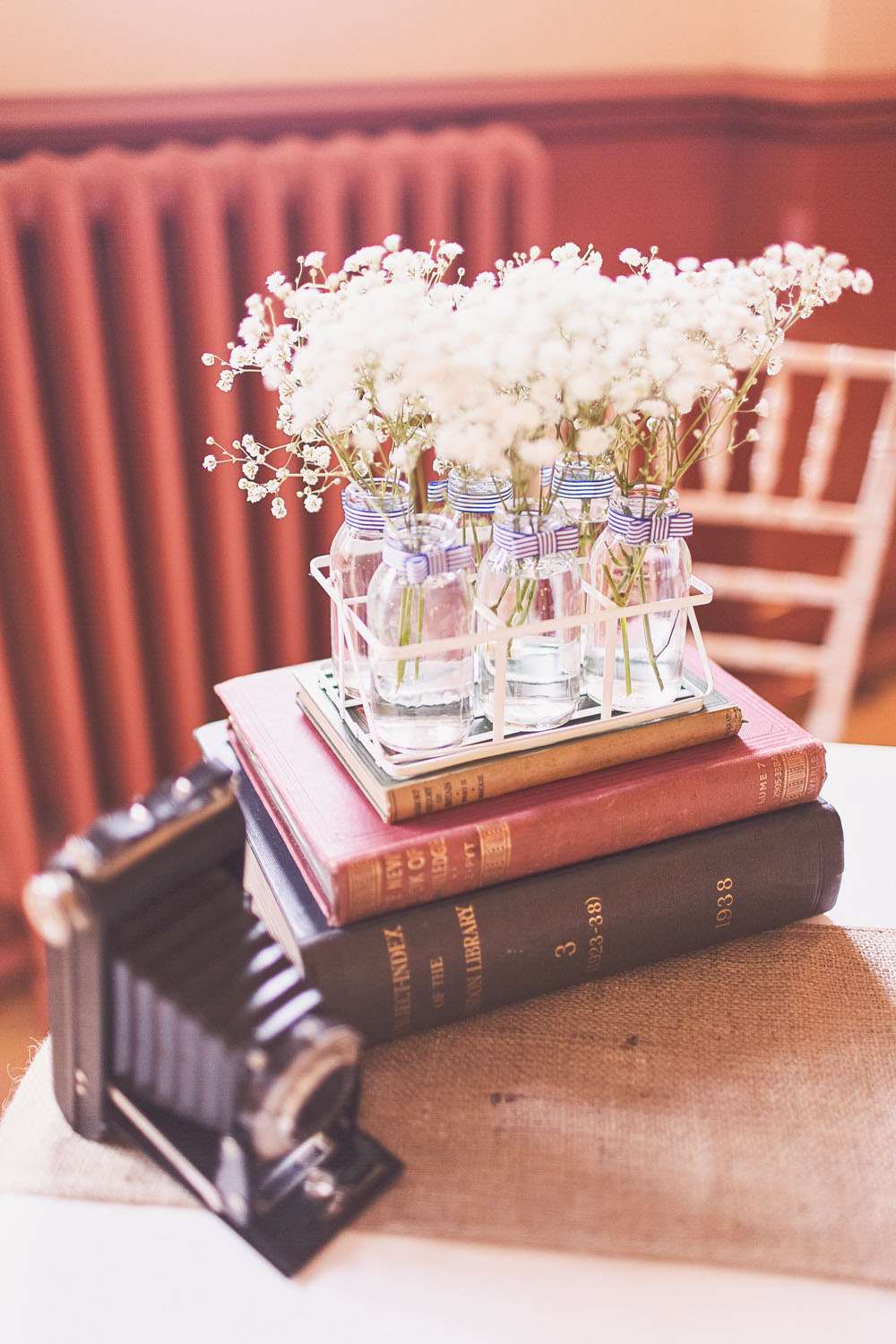 “Also our friend is a carpenter and he very kindly made us some village fête games for our guests to play including Splat the Rat and anther friend did the music for us. A neighbour made the heart shaped rainbow cake. We also had 100 vegan cupcakes made by the mother of one of our guests. ” 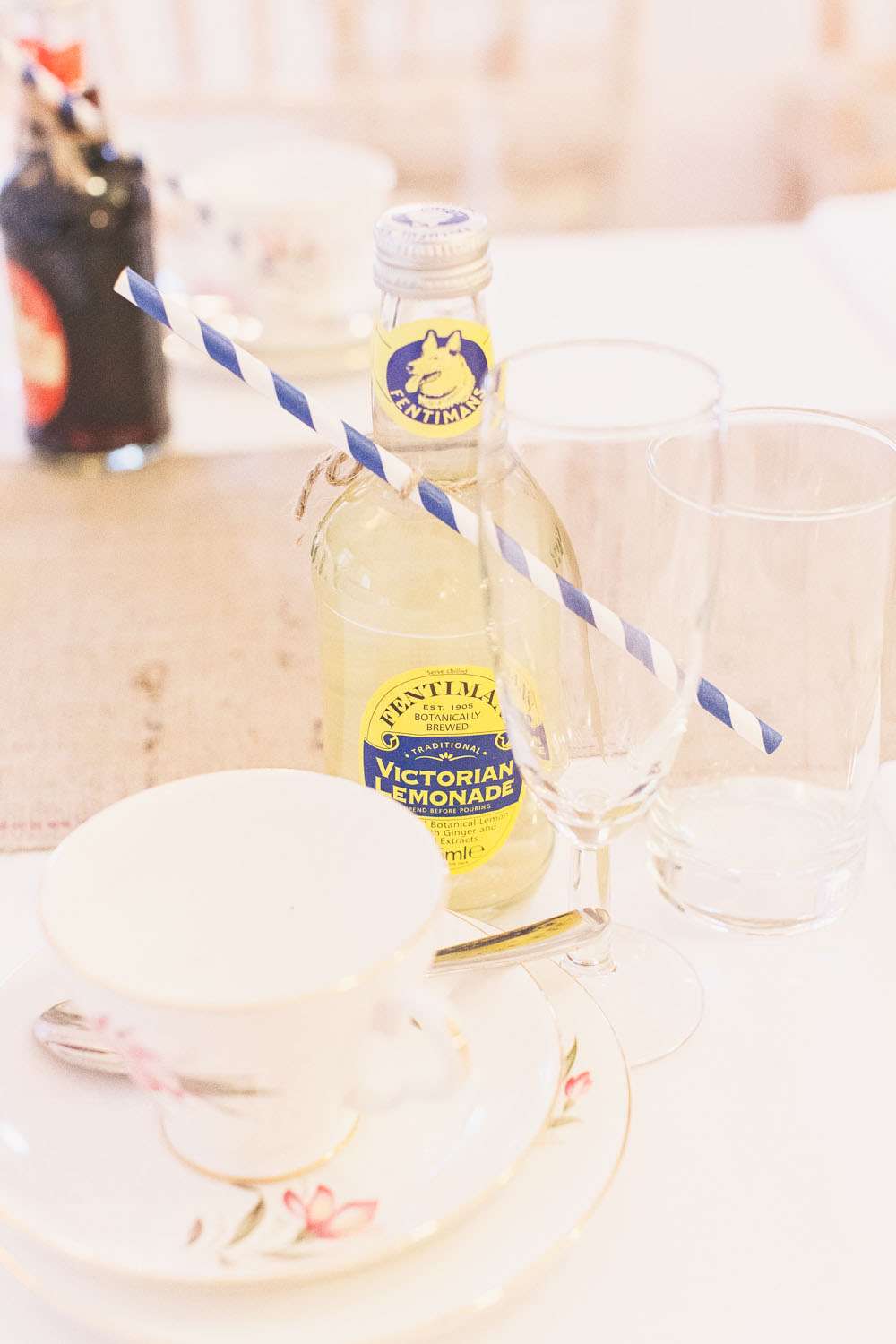 “We tried to make  the wedding feel like a village fete and filled the venue full of bunting”, she continued. “We also decided quite early on that we would use lots of different blues in both our outfits and the décor. Because the room was neutral it worked really well and the character of the building really suited both the layout of the ceremony and reception.” 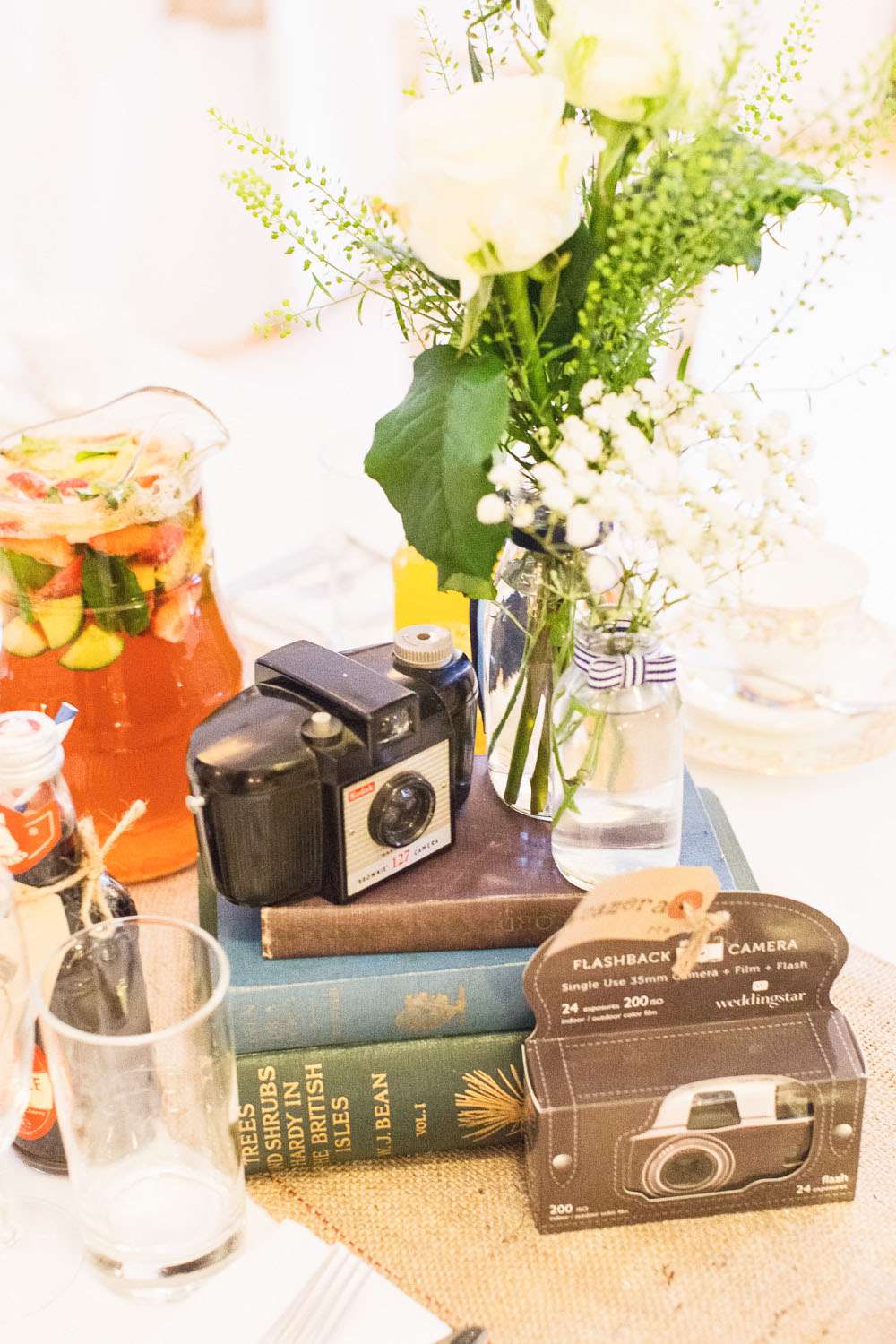 “Our biggest expense was our catering because we wanted to make sure everyone ate well. Both the bridesmaids and the best man are vegan so we went out of our way to make sure they didn’t go without too. We’re both vegetarian so there wasn’t much meat at the wedding, we didn’t tell guests until after that they had eaten vegan cupcakes and vegan hot dogs! Instead of champagne for the toast we had bottles of Fentimens sift drinks because Kieran is straight edge and I’m not a fan of champagne!” 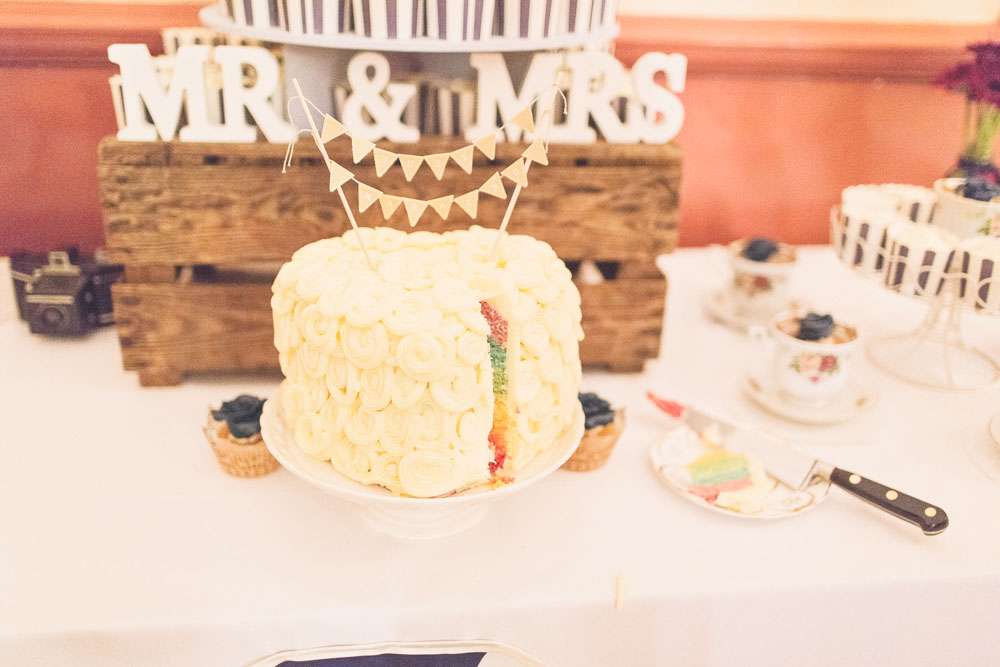 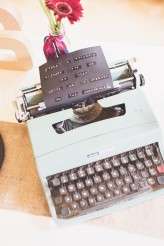 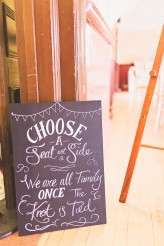 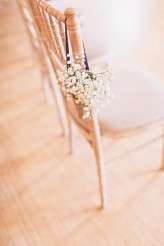 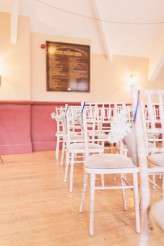 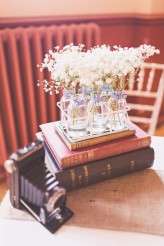 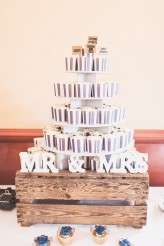 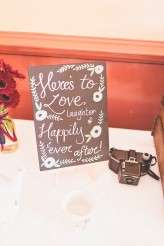 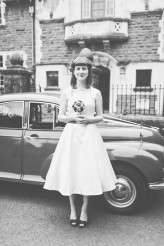 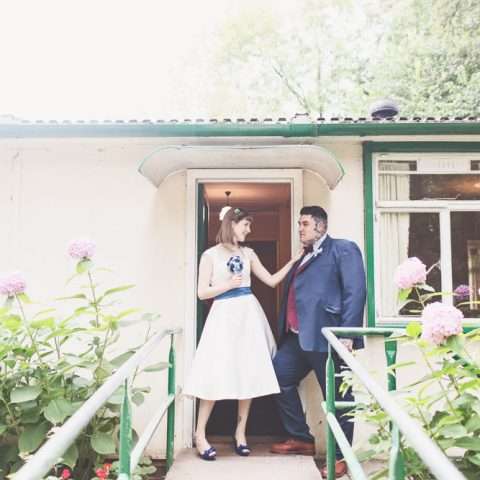 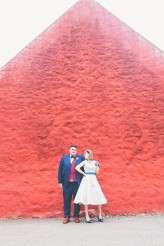 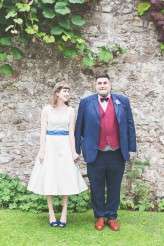 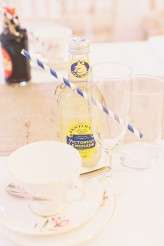 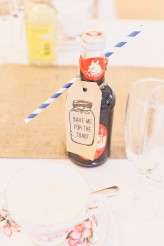 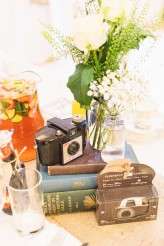 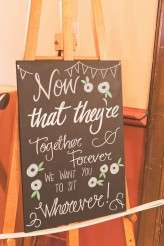