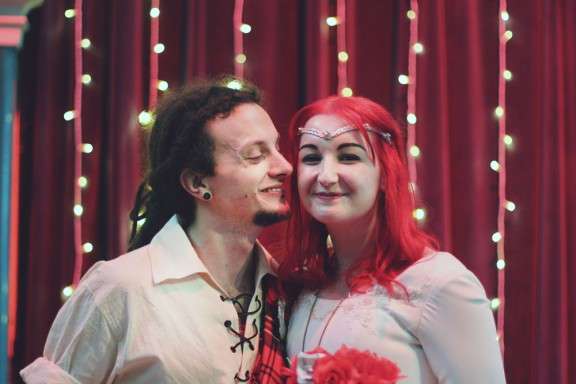 Lauren and JP’s Glasgow wedding was based on their mutual love of Scotland and literature. “Our inspiration was really just stuff we like”, Lauren wrote. “Medieval mixed with Scottish mixed with books mixed with 50s mixed with tattoos mixed with pumpkins! It was lucky that our mish-mash just worked in the space together! There’s nothing like that moment when you see your vision for the day come together so well.” 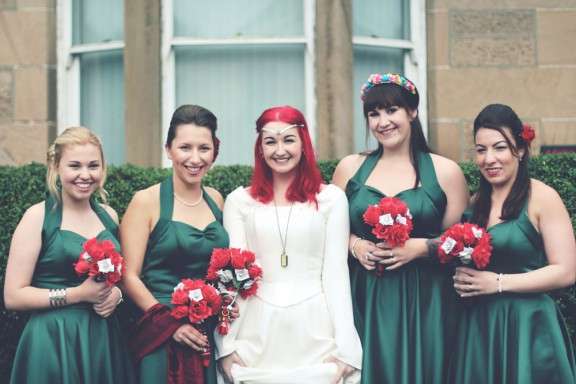 “If I had to describe the theme to someone I would say ‘fantasy and fiction’ as books really ended up as our main theme. We had the tables named after our favourite authors, bookmark favours and many other little nods to authors like the card box in the shape of the luggage from Terry Pratchett’s Discworld book series.”

“The cake was made by my brother and was decorated with spines of books we have read and loved. It was a chocolate and whisky sponge and looked amazing! The cake was my big surprise on the day as he kept his plans a secret. My brother is a pastry chef and has worked in some pretty prestigious places so a lot was expected of him, and he certainly delivered! After the wedding he tweeted pictures of his cake to some of the authors featured on it and they responded!”

The wedding took place at Oran Mor. ” We fell in love with our venue on the first viewing and decided to have both our ceremony and reception there”, Lauren said. “The auditorium is such a beautiful, individual space with a beautiful ceiling mural by Alastair Grey. The events team were extremely helpful and helped our day go really smoothly. The staff were all really helpful and friendly too. They kept telling us how much they were enjoying the day too! The food was excellent and drinks were only pub price = happy guests!” 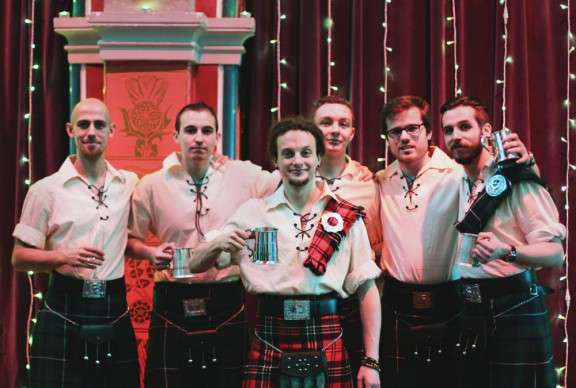 “We chose a humanist wedding because we aren’t particularly religious and we wanted a really personal ceremony”, she continued. “Our officiant, David, was the perfect celebrant for us as we had many interests in common from music to geeky things. He incorporated our interests, some quotes, jokes and a R2-D2 figure!”

The bride wore a medieval inspired wedding dress which was from Dragonfly Dress Design. Her amazing ‘Don’t Panic’ tights were from Tattoo Socks on Etsy. “My dress was vintage from the 1970s. At Dragonfly Dress Design they not only sell vintage pieces but also create vintage style dresses to your specifications. This was something I was considering until I tried on this dress and fell in love! They changed the lacing at the back to red ribbon and added some beaded embellishments for me to make it extra special. My headpiece was beautifully crafted by Thyme2Dream on Etsy. The circlet was perfect for me as it incorporated pearls to match my other jewellery, autumn leaves, and celtic style twists!” 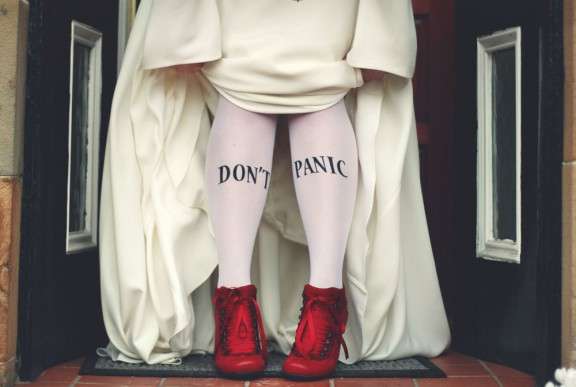 “My dress was actually very inexpensive too. Choosing to go vintage meant that I had a beautiful, unique dress with a history that was also a lot more affordable than the modern off the rack dresses that didn’t appeal to me anyway. We also saved money by not having any live entertainment. JP spent about £25 buying tracks instead of us spending over £1000 for a DJ or band!” 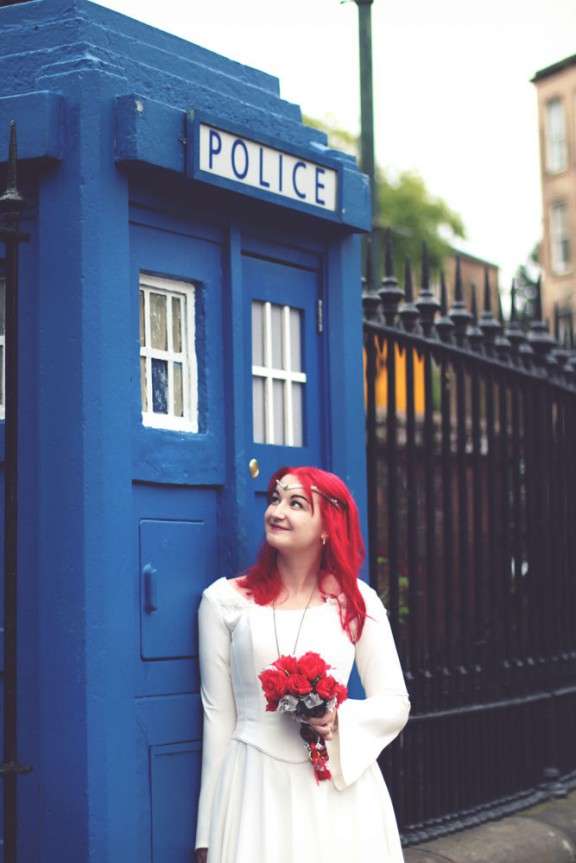 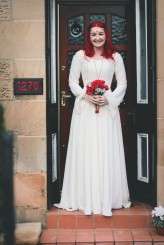 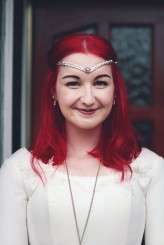 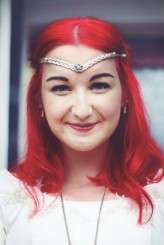 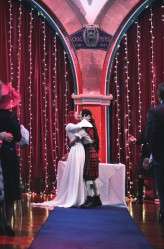 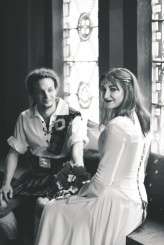 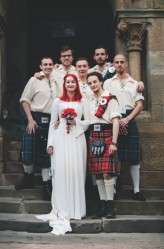 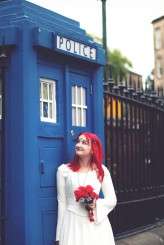 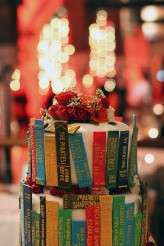