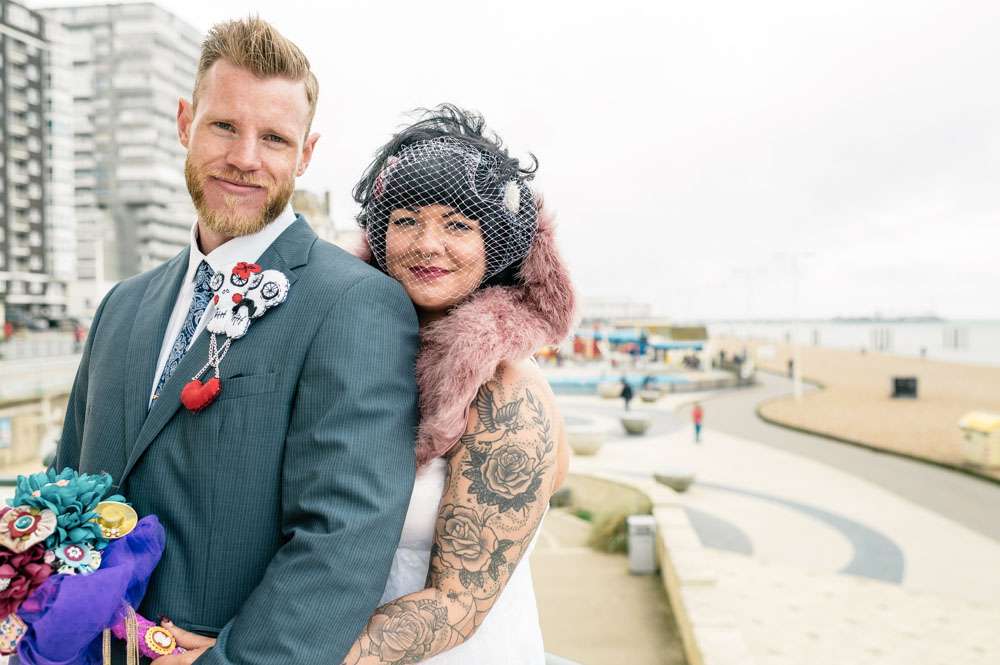 “Our theme was a little bit mad”, laughed Steph. “We love the peacock colours so that became our colour palette. We were never going to have a traditional wedding in a church or hotel, we wanted something fun and memorable. Our wedding was all about having fun, getting our families together with things that we love such as the sea, fashion, textiles and creativity. We made most of our decorations and favours as well as the bouquets. It was a very hands on wedding and I enjoyed the prep as much as the actual day.” 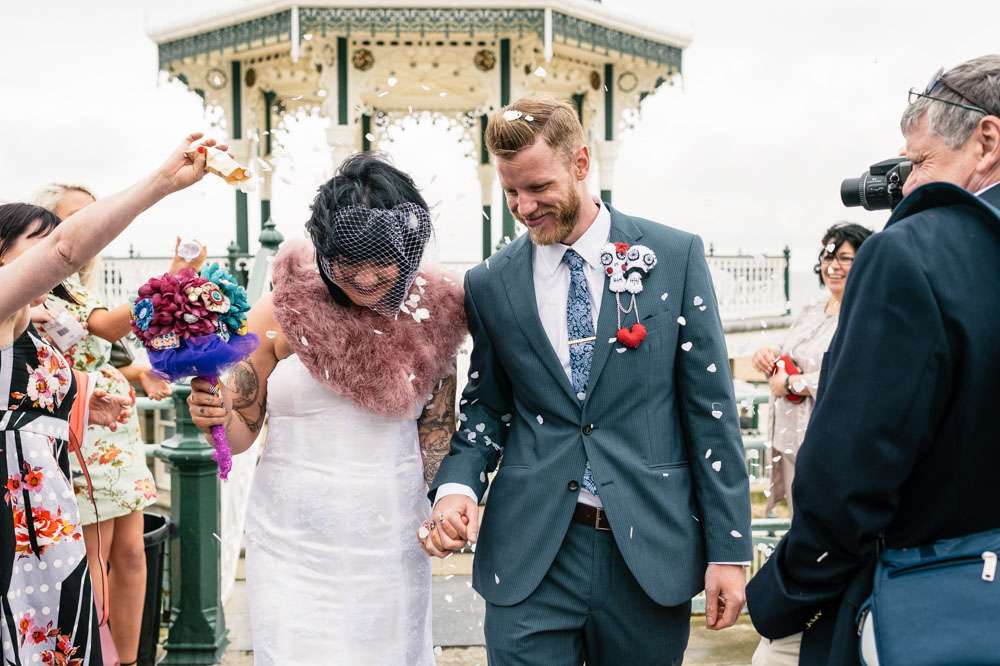 “The ceremony venue also made it unique. The bandstand is incredibly beautiful and it’s not everyday you get married on Brighton’s oldest landmark. It’s got such character and is stunning but it was always risky this our wonderful British weather!”

“We chose skulls instead of flowers for the buttonholes, we had a skull cake and our reception at a cabaret bar!” she continued. “We ended up having a sea theme on the tables with the octopus and the lobsters!! The lobsters were a personal joke – for anyone that watched Friends they’ll understand..! Harry was also brought up in Clacton on Sea, and is very much a seaside boy. It was also very appropriate. Our table plan was prints by my favourite tattoo artists, Angelique Hautkamp.” 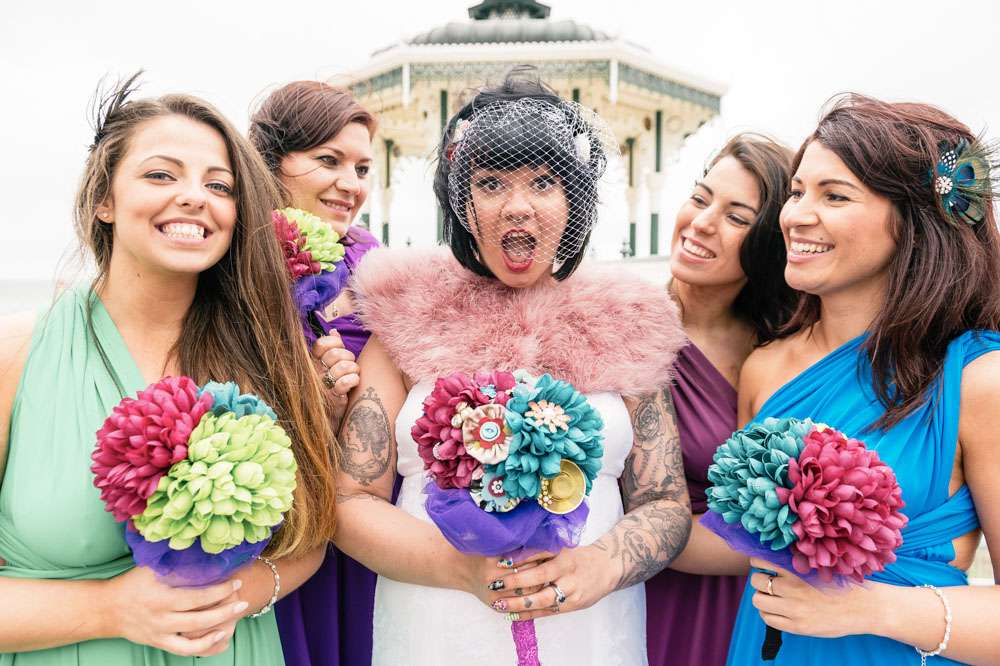 “Our biggest expenses were the food and our rings,” she explained. “My engagement ring is quite large and round and I was always going to have to have it custom made. We found a lovely company called Smooch who did a home visit and I ended up with a beautiful white gold horseshoe with diamonds in the band. Lots of sparkle! Harry wanted something that was non-traditional too and we eventually found a second-hand gold signet ring with a square top which we had engraved with our initials.” 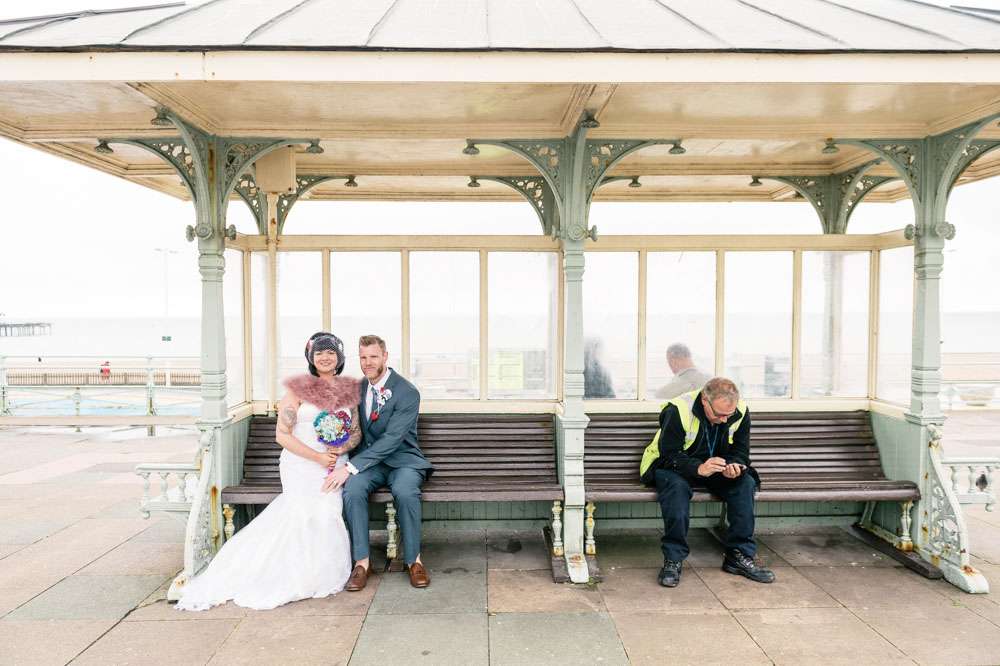 “We also decided to go big on the cake! This was a huge part of our budget but when we decided on a Brighton wedding and there was only ever going to be one place to get it from: Choccywoccydoodah! I’m not a fan of wedding cake and I hate Victoria sponge and fruit cake but after we went for our consultation we fell in love. We went for the BIGGEST version with the most colours and all the glitter! it was a show stopper! We decided on Sicilian lemon sponge with dark chocolate truffle filling and it was divine! By far the best cake I’ve ever eaten!” 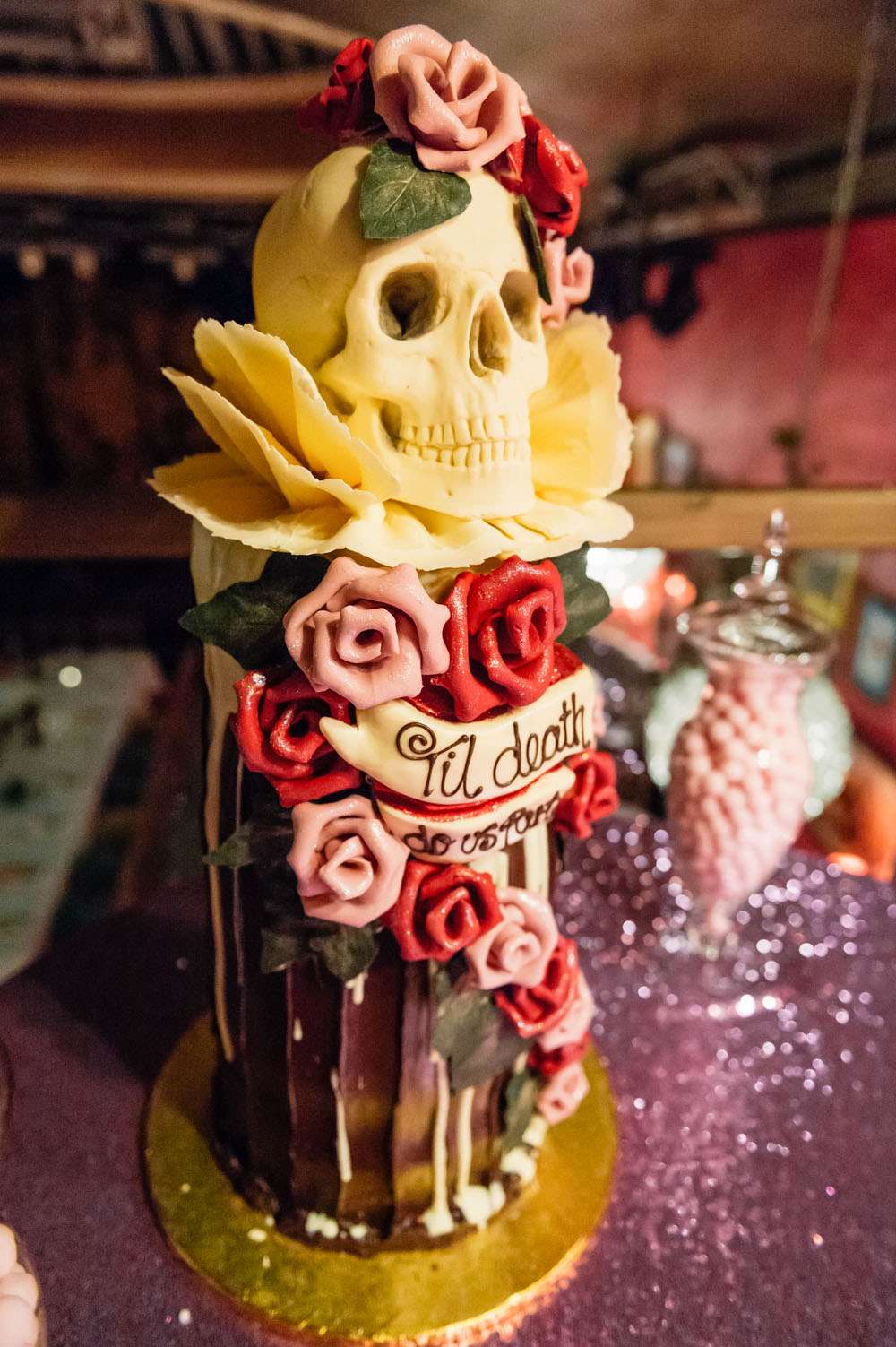 “However we saved money on all the dresses. I am very lucky in that my mother-in-law in a fantastic seamstress. We went to several bridal shops looking for mine and the bridesmaids dresses bit I didn’t enjoy it. So instead we found a few patterns that I liked, ordered fabric and she made them. My dress fit like a glove and the cost was a quarter of going the traditional route.” 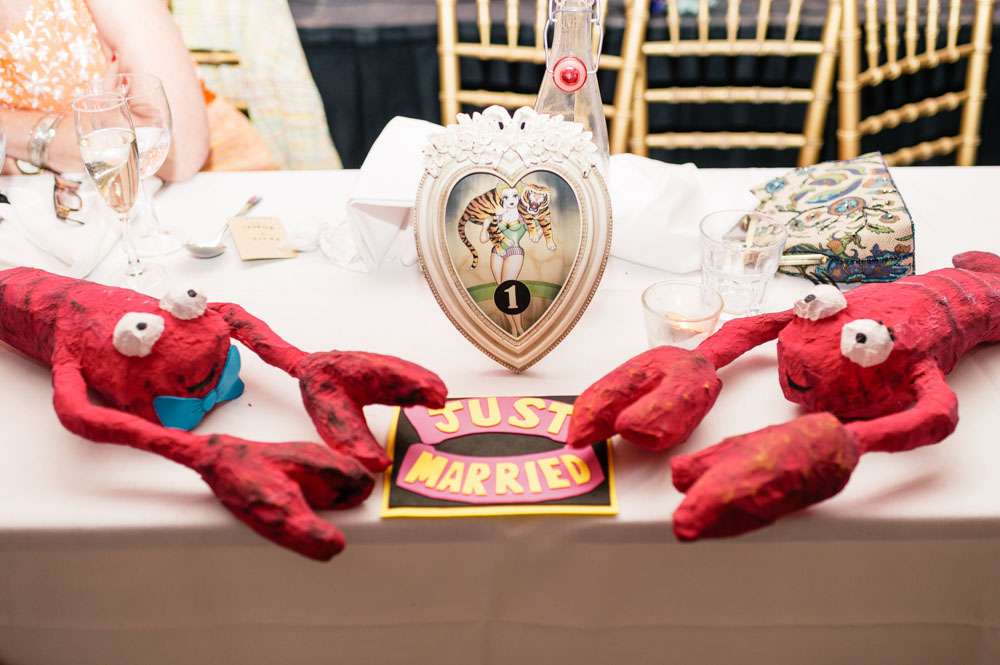 “Getting married has been the best thing we have ever done”, she concluded. “Having our wonderfully mad families all together singing, dancing and enjoying themselves was a dream. We are very lucky to have such a huge support from them and their love and generosity is incredibly overwhelming.” 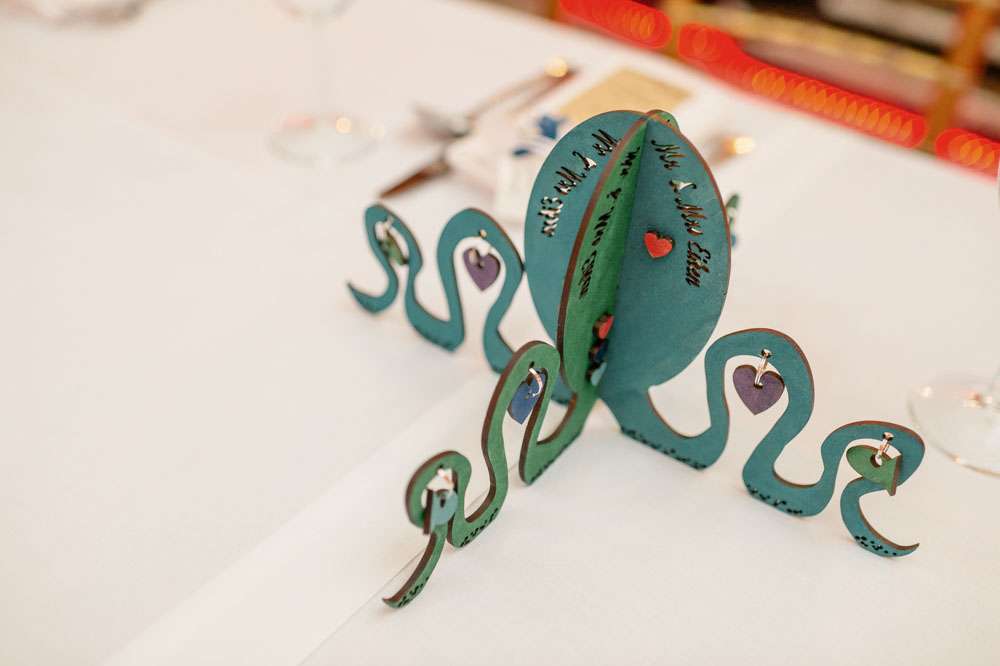 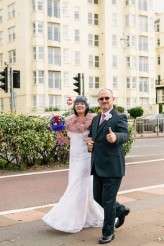 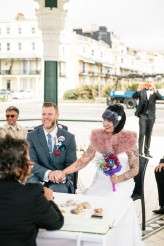 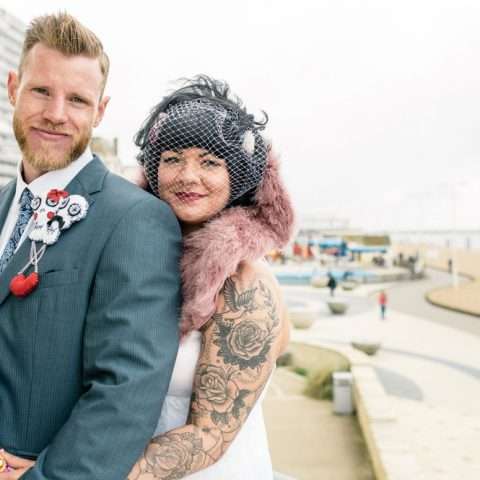 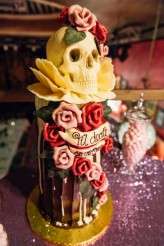 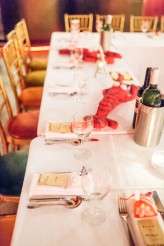 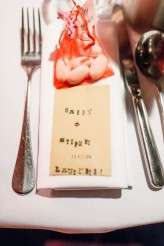 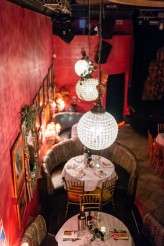 Ren & Tim pulled off their amazing colourful and alternative wedding with a £9000 budget. They spent on the things they felt were important and saved by DIYing the elements they knew they could do themselves (reception decor, stationery, cake). Although these things didn't always go to plan, in the end it all turned out alright and the things that didn't work really didn't matter on the day! I particularly love this wedding because it took place in Reading (where I live!). In fact the bride moved to this little town of ours from London to be with her boy. Awww!

Faith and Matt's summer wedding was full of handmade details and was inspired by their love of colour and Jurassic Park! They had lots of multi-coloured pom poms such as on the bride's Crown & Glory veil and they had their guests throwing them instead of confetti!

Danielle and Lee’s wedding was a masterclass in how to make the slightly kitsch incredibly cool. Their wedding, fittingly held at Valentine’s Mansion in Ilford last summer, was candy and sweet-themed, and featured lots of DIY projects, a rainbow colour scheme, and some badass portraits that make them look like a super-cool indie band…