A pink haired bride, a blue haired groom, neon custom Nike trainers and a wedding dress with a rainbow petticoat and a camera embellishment… Now what’s not to love about this amazing wedding?!? Laura and Joe wanted to do their own thing for their wedding. They planned a day that was truly reflective of who they are, and they had a blast doing it!

“The main thing throughout our planning was to make sure that it wasn’t a ‘normal’ wedding”, said Laura. “We didn’t want it to be the usual affair that is the same as everyone else’s because we’re not like that. We didn’t want speeches or sit down meal or any of the formal stuff. We wanted our wedding to be fun and for everyone to have a good time. The main theme was bright and colourful, so we wanted people to wear clothes that were as bright as they felt comfortable with. Also nothing matched, I wanted it to be an explosion of colour!” 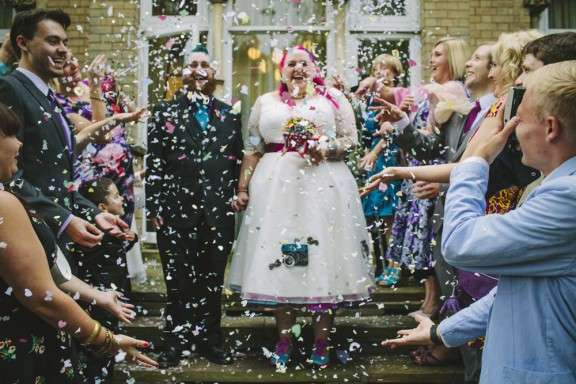 “We did loads of DIY”, she continued. “I made all the vinyl record bowls that went on the tables, I drilled holes in the edges so I could tie three balloons to each in a sort of hot air balloon kind of thing, and bought novelty ducks to sit in them for guests to take away. I even wrote our initials and the date on the bottom of each of the duck (all 190 of them!). There were also ducks lined right across the bar, not one duck was left behind at the end of the night, people had handbags stuffed full of them!” 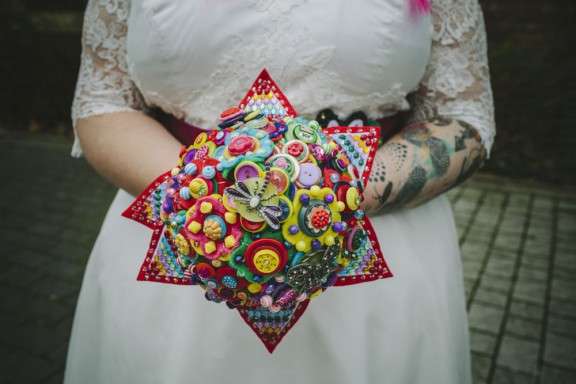 “I made bunting from the record sleeves of all the records I’d made bowls from and threaded it all with a button between each flag. I designed the whole layout of the room really where everything was going and what to put on the tables. The buttons on the tables were a last minute thing but ended up looking great and made the white tables more colourful.”

“As we’re tattoo people we decided to put transferable tattoos on the table for guests to play with”, she explained. “They went down a storm with people running round with them up their arms and stuff. Even my mother had one on her face saying princess! One of my favourite things I made was the sign for the guest book. I stuck loads of buttons round the edges and pictures of us, along with googly eyes and foam whales and fish to jazz it up. Our guest book was a pink guitar that we’d named Evelyn and we’d put out loads of colourful pens for people to write all over it.” 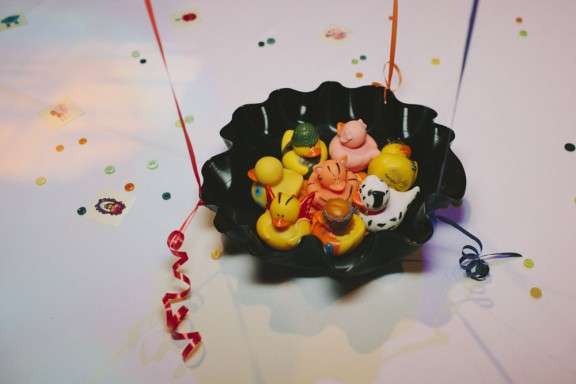 “I think one of the strangest things I put in there was Vivien the scary mannequin. With there being a lot to see at the wedding we wanted to direct people to the different areas so we bought Vivien from a local market and I decorated her with cyber paint and sewed two tattoo sleeves to one leg. She wore one of my old clubbing skirts and I made pointing hands with directions to the various places in the room to stick on her top half.” 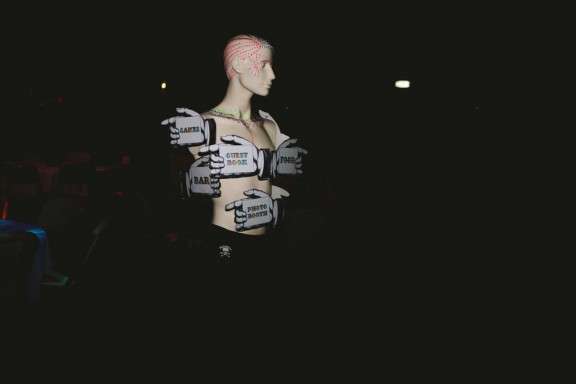 “For me, my favourite thing about our wedding was seeing all the things I’d worked so hard on coming together,” Laura continued. “Also seeing all my friends that I’d not seen for a long time. It was just a fantastic day and night and it couldn’t have gone better. For Joe he says it was dancing with all his friends who had travelled from near and far, and he also loved the cake, he’s obsessed with the cake!”

“There were three main these we spent money on (despite only having a £8000 budget) and those were the cake, my dress and our photographer. Joe is obsessed with cake and I said that he could have whatever he wanted. He decided he wanted a Portal themed cake (as in the game) I found the Little Cherry Cake Company at The Eclectic Wedding Extravaganza in Birmingham and she is the absolute best cake maker I have ever seen. It wasn’t cheap, but it was worth every penny. 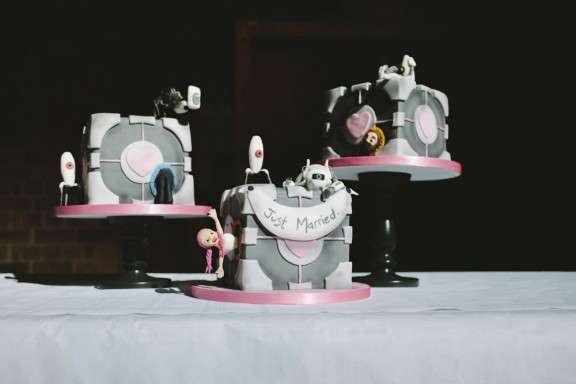 “Another big spend was my dress. I hadn’t been too fussed on what I was going to wear until I saw the tattoo dress on Rock n Roll Bride by The Couture Company and I knew nothing else would ever compare. I didn’t care how much it cost after that because it was as ‘me’ as anything could possibly be and the whole process and experience with The Couture Company was a dream.”

“As for the photographer, well being a photographer myself (hence the camera embellishment on my dress!) I knew how important it was to get someone good. You get what you pay for and if the photographs mean anything to you at all then you just have to suck it up and pay for them. We couldn’t have been happier with Yvonne. She was bonkers and suited us right to the ground. The pictures are amazing and worth every penny!” 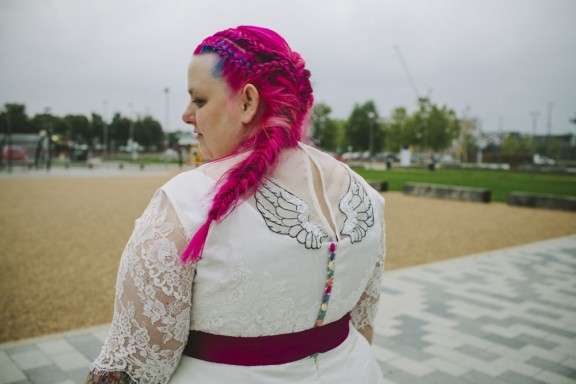 “Do what you want, not what you think you should be doing”, Laura advises in conclusion. “We definitely did what we wanted and I didn’t let anyone tell me what I had to do! One thing I really stuck to was my make up plans. I didn’t really want to wear any, which people thought was weird. But, I rarely wear make up and wanted to look like me on the day. I stuck to having just rainbow coloured eye make up and a bit of blusher and that’s it. I felt comfortable and happy and that’s what mattered. Overall we stuck to our guns and we had a blast. The best bit is that all out guests did too!” 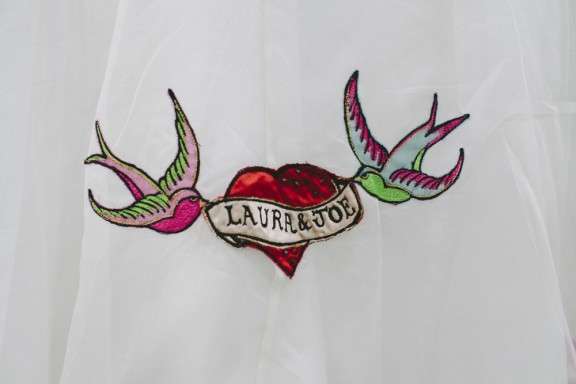 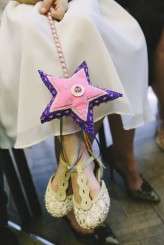 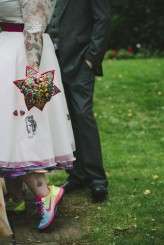 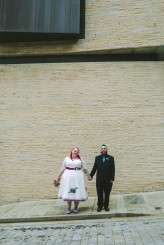 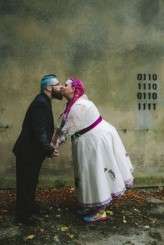 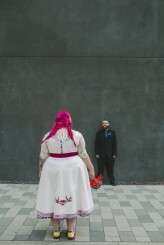 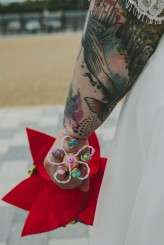 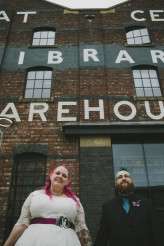 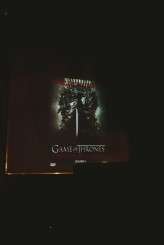 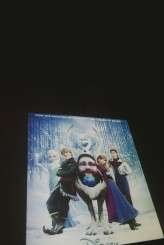 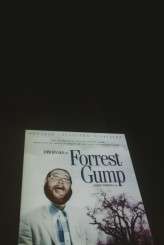