Like so many awesome couples these days, Vivien and Nick wanted a wedding to reflect them – and that meant going against what a lot of their friends and family thought! When people expressed disapproving words that the bride would be wearing black, she ignored them! She knew it was the right choice for her, and thank goodness she stuck with it because doesn’t she look SPECTACULAR?! 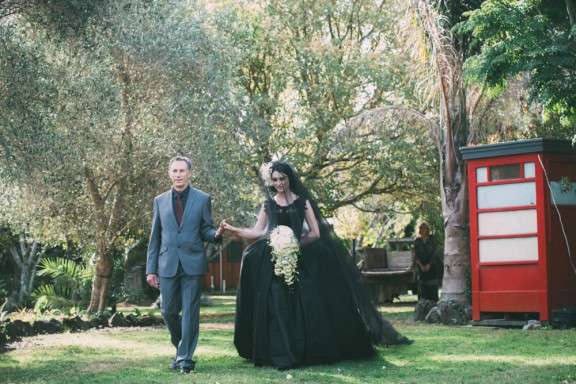 “The wedding theme was our take on Victorian elegance… meets metal!” began Vivien. “Our colour scheme was black and cream. I initially dreamt of a ‘black-out’ wedding, where EVERYONE present would be dressed entirely in black. I still think that would have looked amazing, but as word spread around family, friends and colleagues that I would be wearing black it became apparent that many don’t share my enthusiasm for the shade! I faced a lot of pressure to change my mind, and wear ANYTHING other than black. It was actually ridiculous. I’m so, so happy now that I didn’t compromise on what I wanted just so that others would feel more comfortable.” 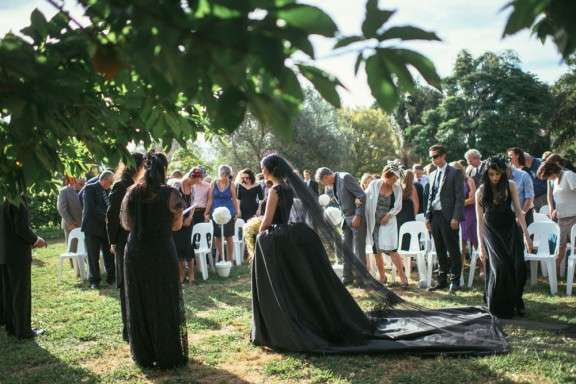 “I worked with the ridiculously talented Jaimee Beck of Beckon Couture to design a custom made Victorian-inspired dress and veil. Eighteen metres of fabric, seven meters of tulle, and around 90 hours of work later, Jaimee had produced a stunning work of art for me! Getting married in black was a no-brainer, as it’s the colour we both live in and wearing anything else would have been strange. Like so many couples, we wanted our day to be a true reflection and celebration of who we are.” 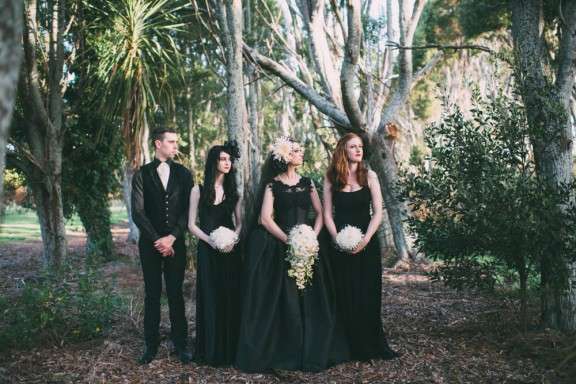 “My father walked me down the aisle to ‘Passacaglia’, a piece of music from the 2004 sci-fi series Battlestar Galactica, composed by B. McCreary”, she continued. “Nick and I love Battlestar Galactica so much, it’s sad. Our wedding rings were made of white gold and meteorite, which the groom insisted upon because he is a space geek. We included this in our ceremony, and our celebrant spoke these words: ‘The wedding ring is a symbol of life and commitment, an unbroken circle that speaks of eternity. The centre of Vivien and Nick’s rings have been carved from the same piece of meteorite that fell from the sky to Africa in prehistoric times. This ancient metal signifies the timeless nature of their relationship, and of the patience that they have for one another’. We then walked back up the aisle together to an acoustic cover of the Pixies ‘Where Is My Mind’, by Vitamin String Quartet.” 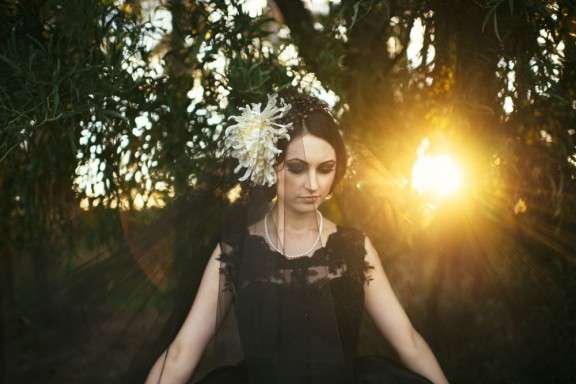 This couple DIYed their favours, stationery and the bride’s headpiece. Their biggest expenses were the venue, the photographer and Vivian’s dress – all of which were very important to them. “We splashed on the venue because you get married once, it’s the biggest party you’ll ever throw and we wanted to ensure our guests had a wicked time! Our venue was expensive, but we were able to have the ceremony, all the photos and the reception on site. Which meant no stress, no hassle, and less organizing for a stressed out bride to be!” 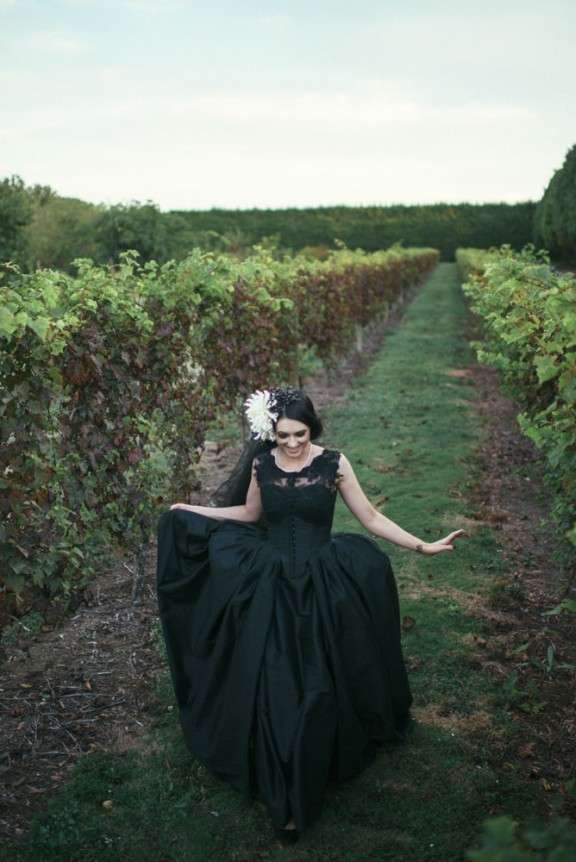 “Photography was in our top three of most important things, but we couldn’t fit the photographer we wanted within our budget. Not wanting to compromise, we set up an online wedding registry through honeyfund.com, and instead of asking for gifts, we asked for donations towards out photography fund! Guests could contribute as little or as much as they wanted, and it worked beautifully. After all the dreaming and planning and stress the day was over so quickly, and we are SO happy that we made the investment in our photographer. Now we have absolutely stunning images of our day that we will cherish forever.” 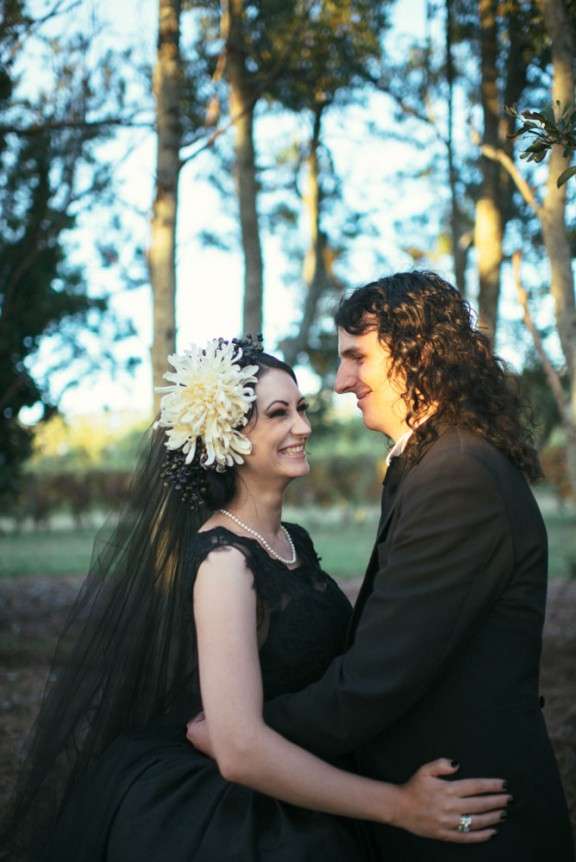 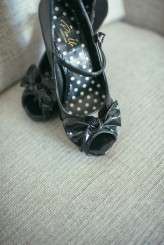 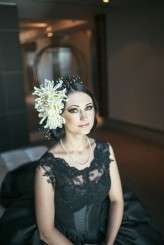 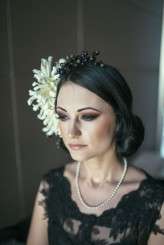 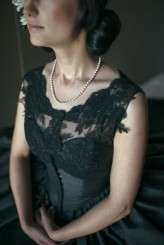 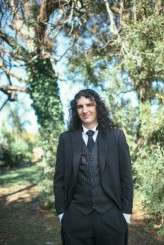 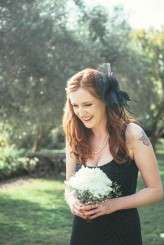 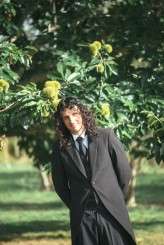 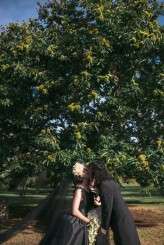 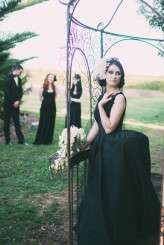 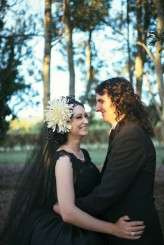 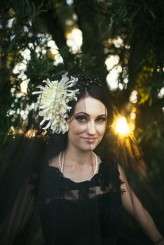 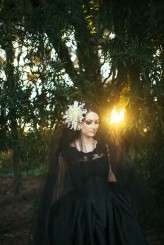 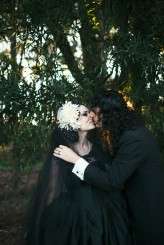 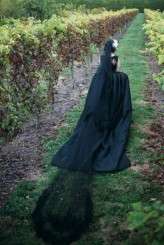 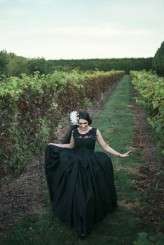 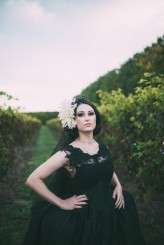 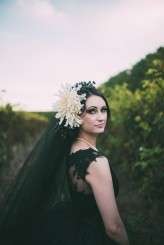 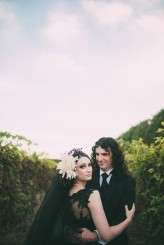 Pat and Veronica's Californian wedding was held at a private residence in Lake Sherwood. The bride rented her amazing Vera Wang dress from onenightaffair.com and wore it with epic Christian Louboutin boots and a homemade veil. She wanted her bridesmaids to look just as good as she did, so they wore sexy leather numbers from Alice and Olivia - there were no ill-fitting, unflattering bridesmaid dresses here!

Brandi and Chris' wedding had a Victorian gothic theme, to reflect the bride's gothic tendencies! "We drew inspiration from the Victorian era", she said. "Chris has a love of aviation which we celebrated through our venue choice, Royal Canadian Air Force Officers Mess."

Chip and Elle's inspiration for their wedding was Vaudeville meets a 1920s circus sideshow. They wanted their "weird sense of style and the idea that we can do whatever we want" to come through in everything they did. The wedding took place at The Loft in Long Beach on Friday 13th of June during a full moon.

Halloween 2014 was the date that Chynna and Reginald said "We do". They were married at Morris Chapel in Stockton, California. "The inspiration for our wedding was anything and everything glamorous and creepy", explained the bride. "Our colours were plum, gold and black. We incorporated a perfect mix of black lace with 90s slasher film awesomeness."