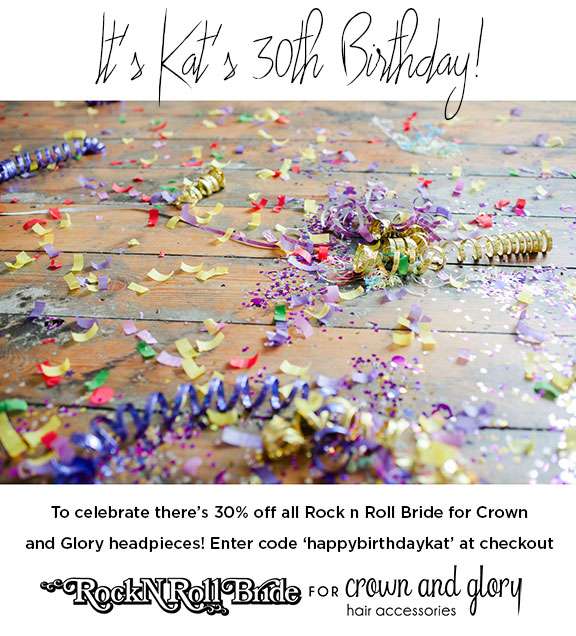 I’ve been dreading it for months, but today I woke up a thirty year old. I almost can’t believe it! It’s true what they say though, time sure does fly when you’re having fun!

It feels like just yesterday that I met Gareth (aged 17), we started dating (aged 18), we got married (24), I started this blog (24), I produced a print magazine (27), we launched The Blogcademy (28) and I designed my first headpiece collection (29) ..! Needless to say I’m pretty damn proud of how much I’ve achieved so far.

Talking of achievements, a lot of you have been asking how I got on with my 30 before 30 list. Well I actually nearly did them all (OK so I didn’t read a book or manage to launch my digital product just yet… it’s coming soon!) But today Gareth and I are going on a spa day AND he just surprised me with a birthday trip to Barcelona TOMORROW so I will have achieved my “go on a random adventure” wish too!!

Now, I certainly couldn’t let this momentous occasion go by without a little gift for you guys as well. So, for 24 hours only, you can get any headpiece from my collection with Crown and Glory at a whopping 30% discount!  Simply enter discount code ‘happybirthdaykat’ at the checkout. Valid until 7.59 am GMT tomorrow, (Wednesday 8th April).

Right, I’ll catch ya later, I’ve got to go and pack for Spain. PARTY TIME!!

Happy Sunday you beautiful creatures! I wanted to pop by today to just say a huge thank you and to share some love for everyone who's ordered, instagrammed or blogged about my little headpiece collection. Sophie and I have been BLOWN AWAY by the response - so much so that the day we launched was Crown and Glory's biggest day for orders EVER and in the first few days alone she used over 12,000 gems making all the pieces that had been purchased. WHOA!

If you follow me on Instagram you will already know that my babe Sophie married her Gareth this weekend and I was one of her maids of honour (I shared the role with Ronnie). It was such a wonderful weekend - THE BEST in fact! We laughed, we cried, we did shots, we ate pizza and the spiciest hot dogs, we drunk danced (and some of us drunk fell over), we abused the photo booth, we stole the skull shaped candles from the centrepieces, we got covered glitter...