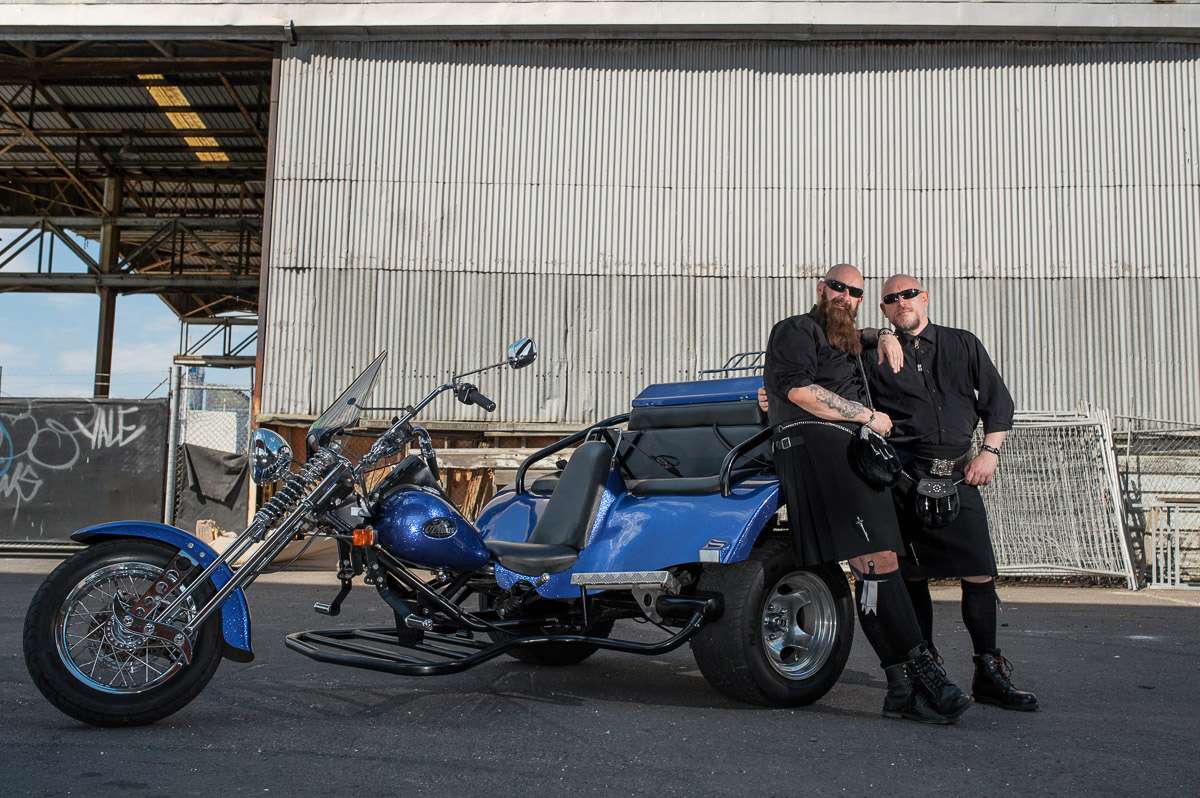 Well that’s something you don’t read often is it?! And what a travesty because Luke & Wout’s wedding is one of the coolest I’ve seen in a long time. Talk about doing things their own way, stuffing tradition and bucking all the wedding expectations. These seriously awesome dudes were adamant that their wedding would reflect them… and it does – in spades!

The wedding took place at their own home in Melbourne, Australia. “We first met through the internet when Luke was still living in Australia and Wout in Holland”, they began. “We then met in person by chance at the Christmas Market in Brussels in 2003.” 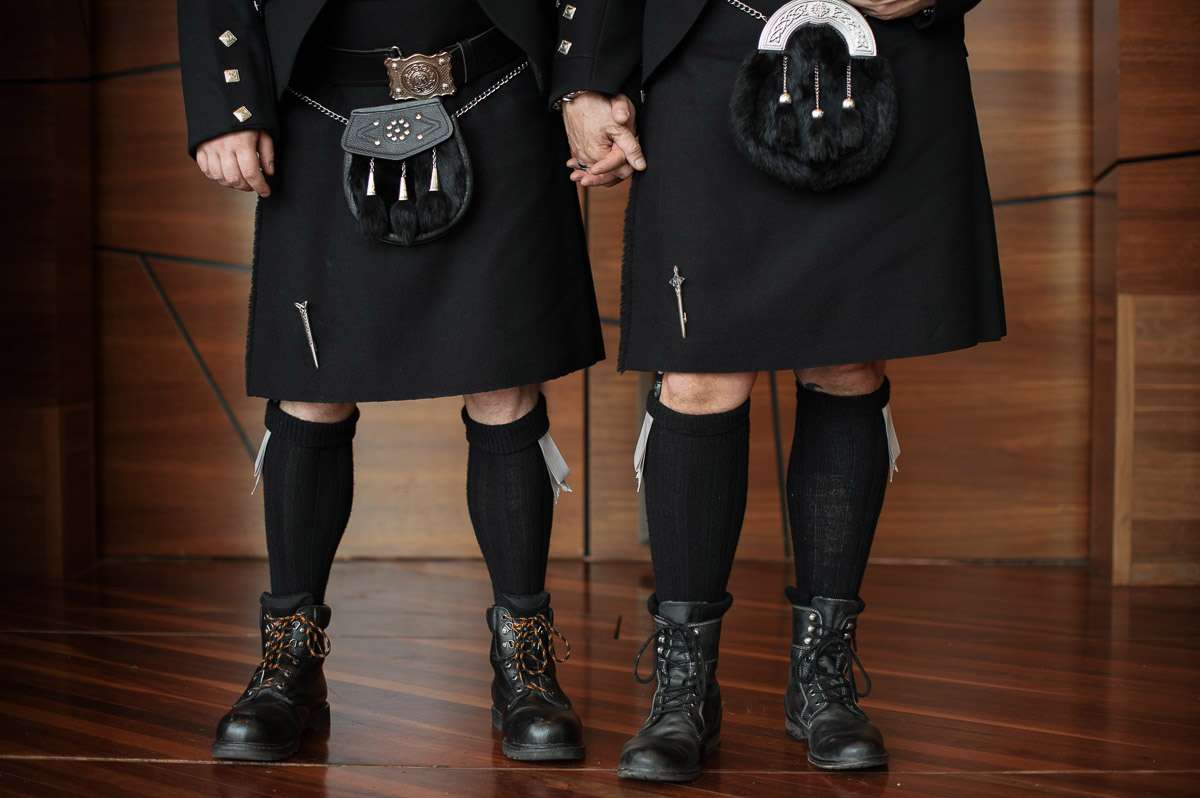 “Given our attractions to bears, bikes (and bikers), gothic and dark electronic music and celtic/viking mythology, we brought a lot of those elements to the day. We didn’t really have a theme, it was just an evolution of ideas based on things we like. To us it was all very normal, but it’s a matter of perspective. Most of our friends, particularly the straight ones, found it unlike any wedding they had been to before. But all of them loved it so it cannot have been too out-there!” 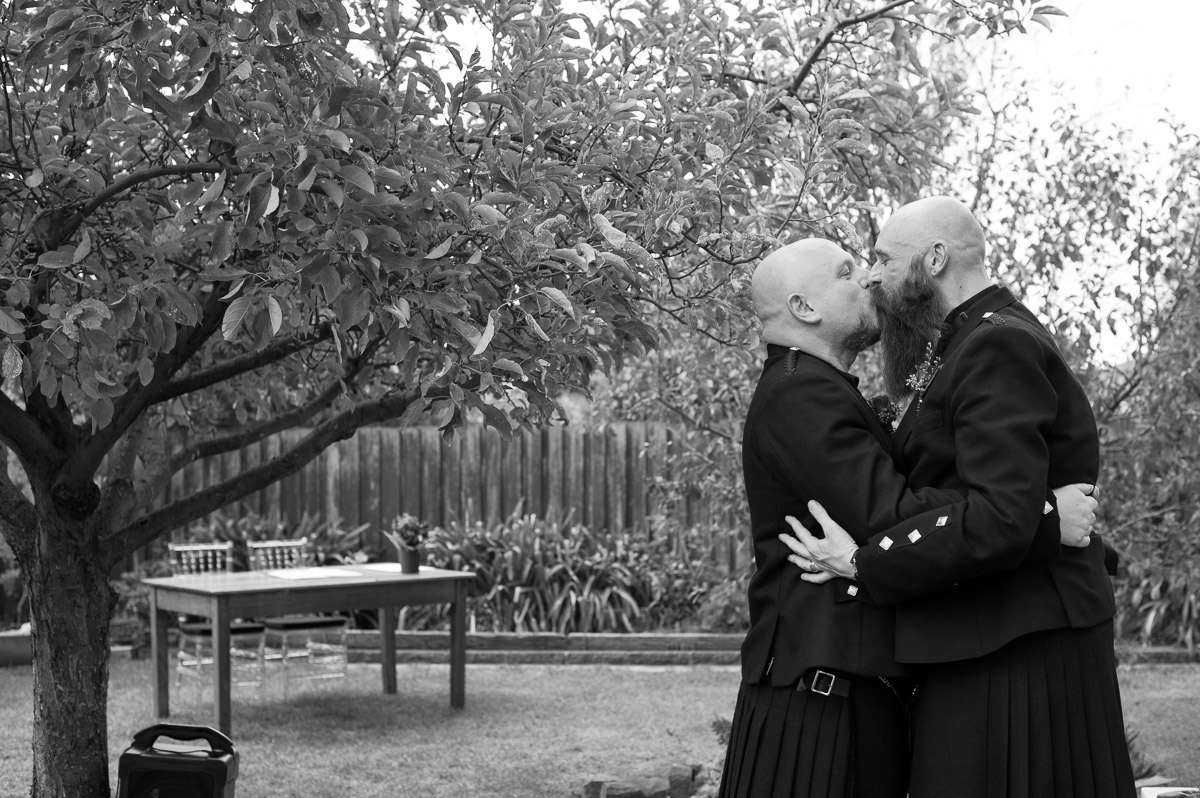 “Perhaps one of the most unexpected highlights was the wishing tree”, they continued. “We didn’t know at first exactly what that was going to be. In the end, we went for an outrageously simple option that worked brilliantly. We brought a stack of plain, brown paper gift bags, some plastic disposable drink cups, some pens and some tea lights. We got people to write a message or wish on a bag and then put the tea light in a cup inside the bag and hung the bags from a tree in the garden. We also had a couple of laser lights happening at night and the combined effect was like fireflies dancing in the trees, with the softly glowing wishes underneath…” 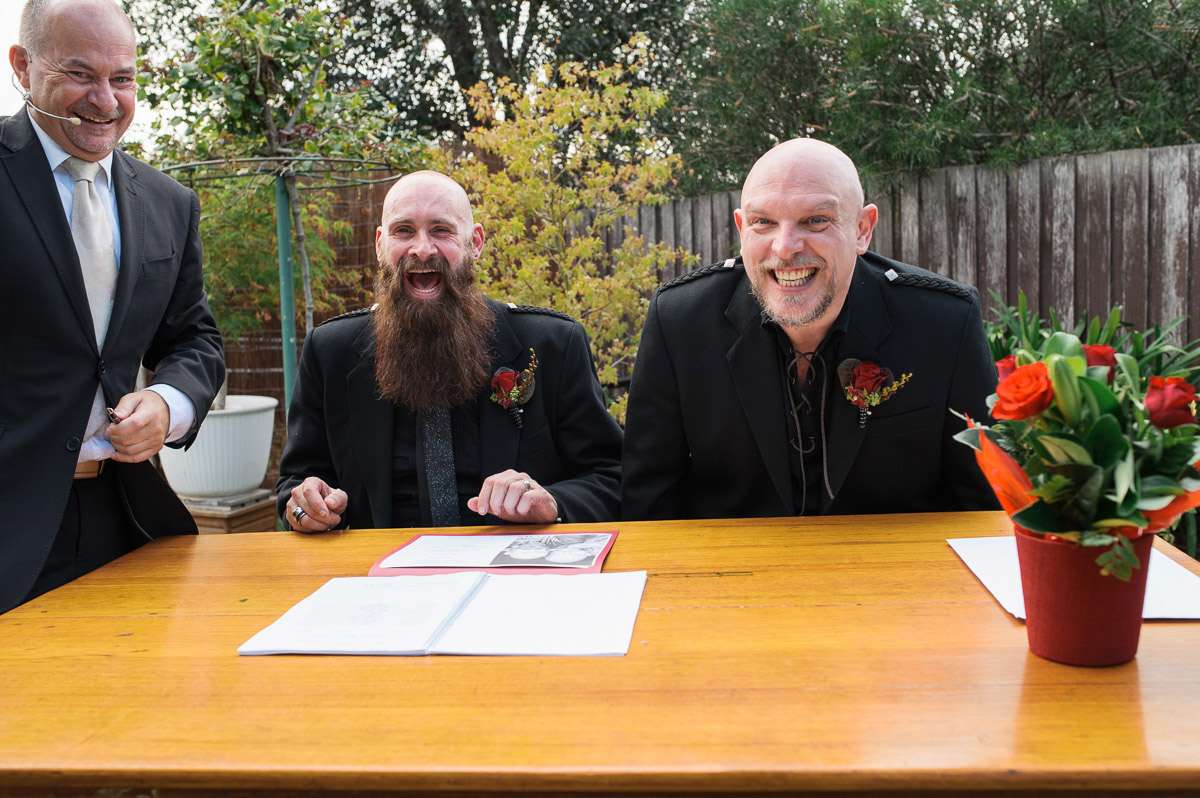 “The thing that blew us away the most was the amount of love and goodwill we felt from everyone there”, the concluded. “Of course, we had an amazing wedding planner, celebrant and photographer, which meant we could relax and enjoy the day too. We splashed out on our photographer, because we had such an amazing connection from the first time we spoke. It just felt like we had to work with her. Also on the food, because nothing will spoil the vibe faster than crap food. We obviously saved money on the venue by doing it in our own back garden. We have an fabulous garden space, and early autumn in Melbourne is a perfect time to enjoy that. It was so nice to be able to have an amazing day and then chill out in our own garden in the evening.” 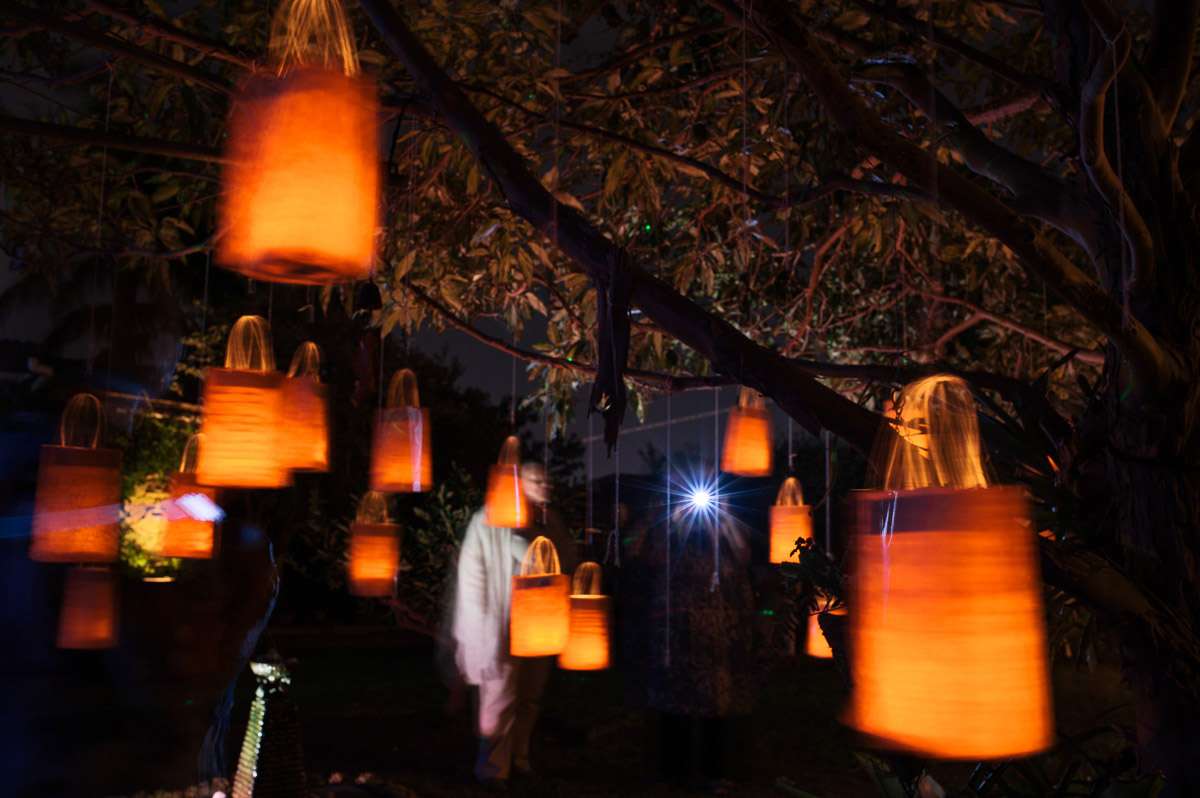 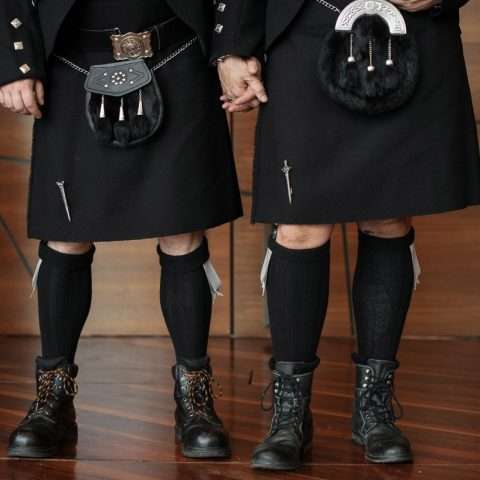 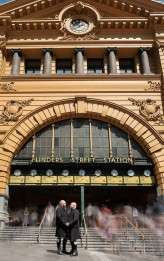 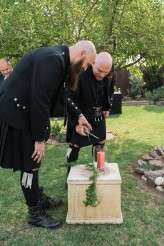 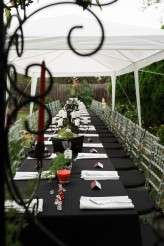 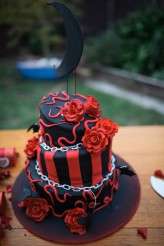 Bookworms Stacy & Jo selected Maynard’s Café, upstairs at Berkelouw Books in Newtown, Sydney as their venue. Although they hadn't hosted a wedding there before, the café were wonderful to work with and really helped the girls put their own stamp on their day. Obviously having a book shop as a backdrop made picking a theme pretty easy. With old books on the long table and books as favours for each of their guests, it all worked really well together.

Get ready, because Sean and Matt's Sydney wedding celebration is about to blow your glittery socks off! And even better than all that - it was a surprise wedding! They invited their guests under the guise of Sean's 50s birthday but mid-way through the night, surprised everyone by telling them they were getting married! Sean only proposed two months before and most of their guests didn't even know they were engaged!

Gothic, Pagan Handfasting in the Woods

Amelia and Tess were married in 2016, before Tess' transition. Since their wedding, Tess has come out as bi-gender, sometimes having days when they identify as male, but others when they're female. The couple wanted to celebrate Tess joining their family, so with the help of daughter Ivy they had a gothic styled, handfasting vow renewal in the same place they were originally married, Whistlewood Common in Derbyshire.

Shannon and Chris met through Gumtree! Chris was advertising for a flatmate, and Shannon was looking for a new house share. They were married in September at Half Moon Hideaway in Maleny, Queensland. Shannon is a circus enthusiast while Chris is a certified geek, they really wanted to make the day about who they are. They served vegan food, did hardly any DIY and decided not to have a bridal party, so their friends could just sit back and enjoy the day.

Mitch and Tash decided to elope and wanted their wedding to feel moody and a bit dark. So the bride wore black and they had their ceremony in a venue that looked like a gothic mansion!