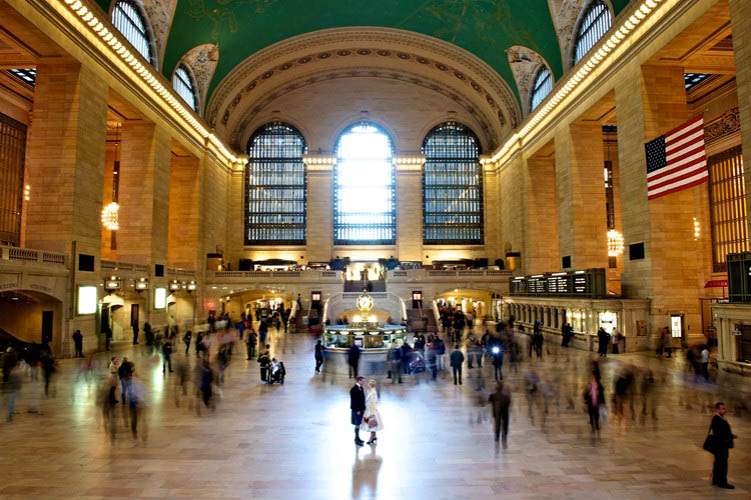 I’m starting 2011 with a bang, and the wedding of loyal Rock n Roll Bride reader Nicola to Steve. The couple, from Northern Ireland, were married in New York and Nicola spent a lot of her planning time on Rock n Roll Bride – in fact when she emailed me her wedding submission, I actually recognised her name from all the comments she’d left along the way. It was almost like we were old friends, so of course I I said yes to featuring her gorgeous Rock n Roll New York wedding on these pages. 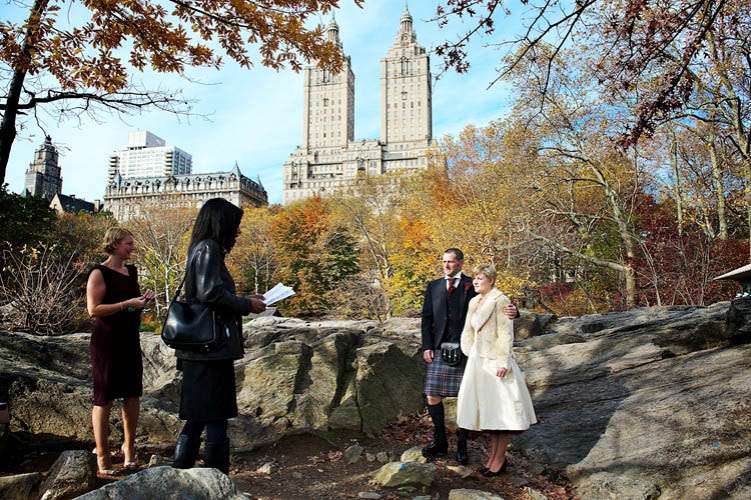 The ceremony took place in Central Park. The couple didn’t have a reception as such as only Nicola’s sister attended the wedding, however they did have a wedding dinner at The River Cafe under the Brooklyn Bridge. “The idea of being centre of attention brings me out in a cold sweat and as both of us are from different parts of the UK we just thought it would be a logistical nightmare trying to bring everyone together,” the bride told me. “We also selfishly wanted it to be about pleasing ourselves on our day and not about what other people would want or expect.  I think because we had both been married before we knew what we didn’t want and our families gave us their blessing to do it our own way.” 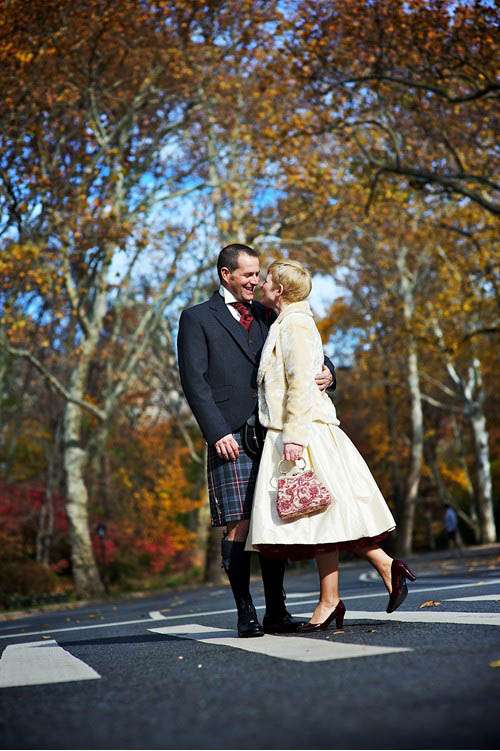 “The night before our wedding we went to a show on Broadway which was amazing. It was a last minute decision and a great one (even though I had planned an early night of pampering I’m so glad we went to the show instead!)  On our big day we walked from the hotel to Central Park with Brian (our photographer) snapping away the whole time!  It was the most beautiful Autumn day with just a hint of winter chill – no clouds, no wind, no rain which was really lucky as the Ladies Pavilion where we had planned to have the ceremony was occupied – a homeless man was sleeping there and so, rather than disturb him, we went round the corner to Hearnshead and got married on a rocky outcrop by the lake – Brian said he had never photographed a wedding there before so that made it all the more unique! Thanks to the wonders of Facebook a girl I worked as a holiday rep with years before and who I hadn’t seen since 1998 had seen my status update about getting married, happened to be in New York on a city break herself and turned up to watch us getting married – it was brilliant to see her after all that time and in New York of all places!” 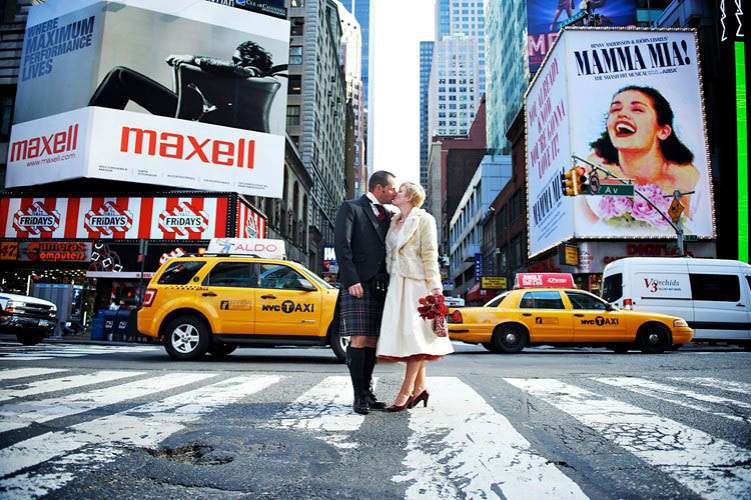 “After the ceremony we flagged a yellow cab and went to Times Square – even though I hadn’t wanted to be centre of attention in a traditional church wedding I have to admit, it was pretty fabulous strolling round Manhattan in our wedding finery with Brian taking our photos!  So many people stopped to congratulate us or call out (nice) comments and we even got asked if we were shooting a commercial or was it a real wedding! We finished up at Grand Central Station and shared a bottle of Champagne with Brian before deciding we were hungry and had hours to go until our wedding dinner booked at The River Cafe.  So, Brian took us to Planet Hollywood in Times Square and it was really funny seeing the looks on peoples’ faces as we tucked into burgers in our glad rags!! We had only booked Brian for a couple of hours and really wished then we had him for the whole day as he was the most genuinely nice guy and an amazing photographer who, being a native New Yorker knew exactly where to take us for the best shots of the city. We then visited an Irish bar called the Playwright’s Tavern on Brian’s recommendation and had a couple of drinks perched on bar stools there with all the regulars! We then went to the River Cafe for dinner. It was the most amazing restaurant with views of the Manhattan skyline. It was honestly the most fun, relaxing, surreal day and New York is THE most amazing place on earth.  The fact that we got married there will always be so special and will of course be a reason to return for our anniversary at some point in the future!” 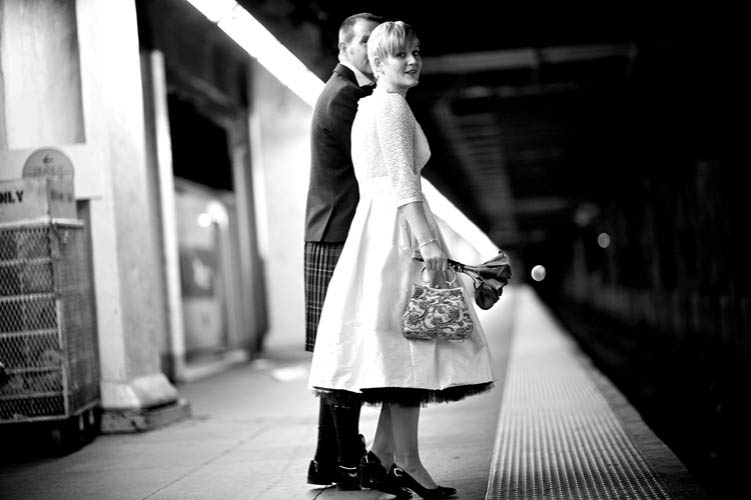 Nicola designed her dress herself and had it made by Alex Gillespie of The Wardrobe, a local dressmaker in Helen’s Bay, Co. Down. It was made using dupioni silk and lace in champagne and had hidden pockets. With this she wore shoes from Marks & Spencer and a faux fur jacket and retro handbag on from eBay.

“I love the glamour of the 50’s – when women looked like women,” Nicola told me when I asked about their wedding inspiration.” However in real life I am very much a jeans and jumpers girl andmost weekends will find us hillwalking or along the beach with our dogs so dressing up isn’t a frequent occurrence.  I knew that as we were having a city wedding I wanted to wear a 50’s style shorter dress andI wanted sleeves (which are strangely hard to find on the internet!)  As I couldn’t find what I wanted and unfortunately don’t have the 22 inch waist necessary to wear most original vintage dresses I came up with my own design.  I also love Sex and the City which was a big part of why we decided on New York as the location – we knew it would be cold as we were getting married in November and we liked the idea of a colder city break as opposed to a beach wedding.” 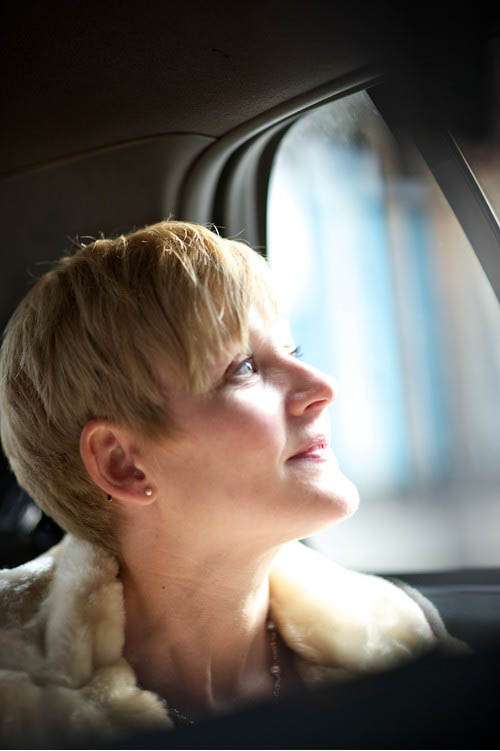 Big love and thanks to Nicola & Steve for sharing their special wedding with us today. What a great way to start 2011!

You can read more about the couple’s New York wedding (glitches and all!) on Nicola’s blog right here. 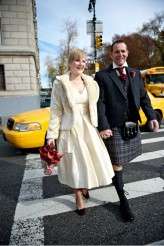 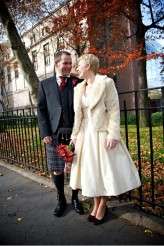 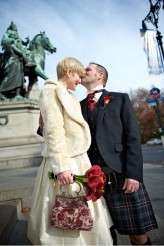 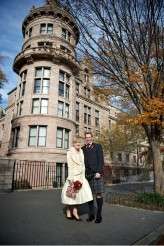 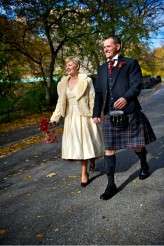 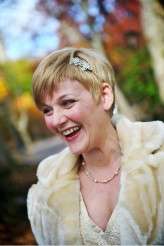 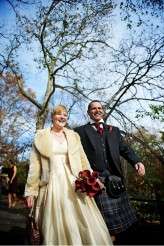 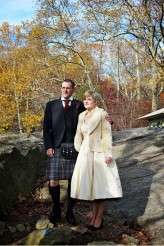 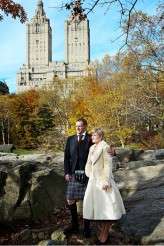 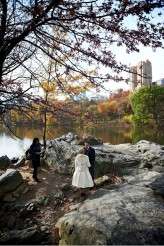 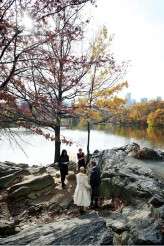 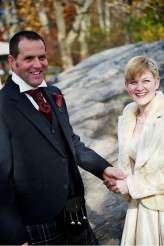 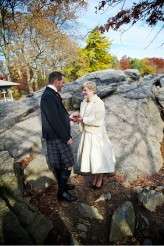 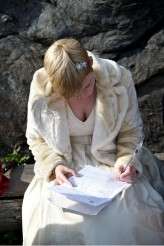 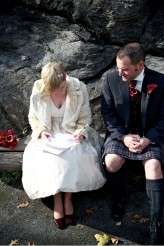 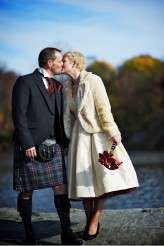 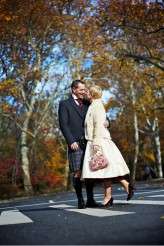 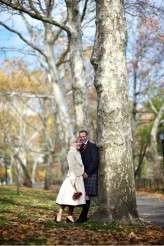 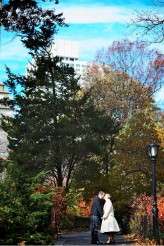 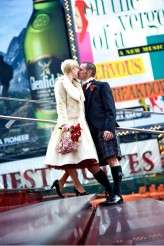 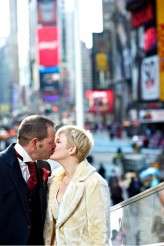 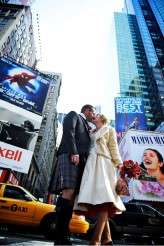 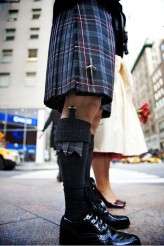 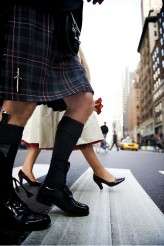