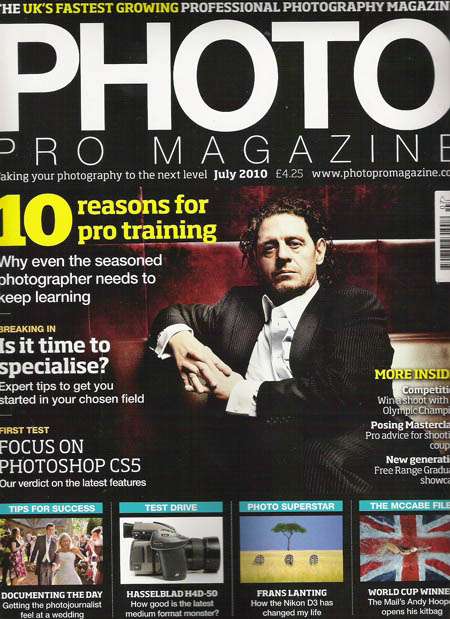 Anyone that’s been following me in any capacity over the last 6 months will be well aware of my love and devotion to Emma Case. Not only have I featured as many of her weddings as possible (I can’t get enough) but I’ve even been lucky enough to be photographed by her. I’d say we pretty much have communication every day (whether that be twitter, email, text or talking on the phone!) and I am honoured to call the talented and absolutely awesome lady my friend. So when it came to writing this month’s ‘Best of Blogs’ article for uk photography magazine Photo Pro, who else was I going to choose? Enjoy…

I heard someone on the radio the other day who said ‘it takes 10 years to become an overnight success’ and while in most cases this may well be true, I think I may have discovered someone who breaks this rule.

I first came across Emma Case on Flickr. She’d added some images she’d shot of a friend’s wedding to a pool and I fell in instant love. They were like nothing I’d really seen before – rustic, simple, vintage, retro, arty and just, well… real.  As these things generally go, life got in the way but I made a mental note that I must email this Emma girl and ask to feature the wedding on Rock n Roll Bride. As luck would have it the very next day I opened my inbox to an email from the lady herself. “My name is Emma Case.  I have no website but have just started my blog (http://www.emmacasephotography.blogspot.com/) I feel either very brave or very stupid submitting photos to your amazing blog as I’m not a professional photographer and never set out to do weddings, but when I started posting photos on facebook, friends began asking me to take pictures of them and soon it began to snowball. Ruth and Dan messaged me saying that they were getting married and explained the plans and I got instant butterflies as I knew it would be exactly my kind of wedding…”

Now not only did I love the images and the wedding but I loved her! I featured the wedding as soon as physically possible and the praise and adoration that followed in my blog comments was pretty much like nothing I’d ever seen for a newbie photographer.

When you look at Emma’s work it doesn’t feel like you’re looking at photographs taken by a seasoned professional and I think this is the main reason why so many people adore it. The simple, natural beauty and sympathetic ‘vintage’ editing really makes them stand out from the crowd. “Nowadays a lot of photographers do the more relaxed, capturing the moment, reportage style so sometimes I wonder what I am actually doing differently!” Emma told me. “ I know I can be a bit quirky with what I find interesting to photograph and I have a definite style of processing and have a major love for polaroid and lomography so that’s really where I think the difference lies.  I suppose I don’t really like having the structure of the day dictate too much of when I take a photo.  I don’t want to just document the day I want to artistically capture it. I like the idea that your wedding photographs should be on your wall as art and not in an album on the top of your wardrobe.

However, as is always the way, not everyone instantly ‘gets’ Emma’s aesthetic. One of the funniest stories Emma told me when we met for the first time was that when she first showed her mother the photographs of Ruth & Dan’s wedding. One of my favourite shots was the main image I used in my blog post as showed the couple kissing but it was cropped just above their mouths so that majority of their heads weren’t in the picture. “Oh Emma you’ve cut their heads off!” her Mother said to her, “what are you going to do?” I think she was having flashbacks of the story that circulated last year of a photographer who was sued by a couple for doing pretty much the same thing, albeit unintentionally and accompanied by a further bunch of dud photos in that particular case.. Mothers huh?! This made me laugh out loud because I’m afraid I could hear my own mother saying the exact same thing! 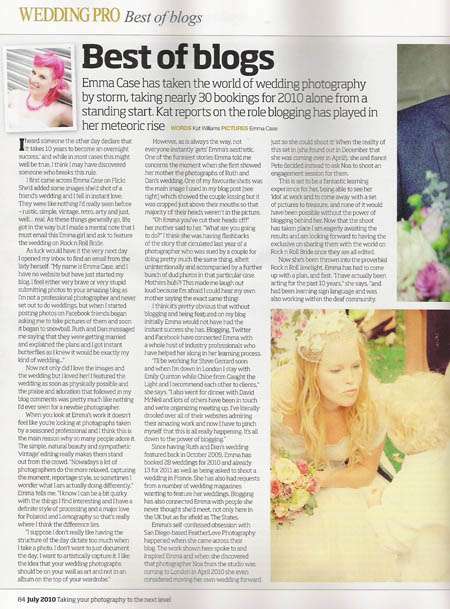 I think it’s pretty obvious that without blogging and being featured on my blog initially Emma would not have had the instant success she has. Blogging, Twitter and Facebook have connected Emma with a whole host of industry professionals who have helped her along in her learning process “I’ll be working for Steve Gerrard soon, when I’m down in London I stay with Emily Quinton, Chloe from Caught the Light and I recommend each other to clients, I went for dinner with David McNeil and lots of others have been in touch and we’re organizing meeting up. I’ve literally drooled over all of their websites admiring their amazing work and now I have to pinch myself that this is all really happening. It’s all down to the power of blogging.”

Since having Ruth & Dan’s wedding featured back in October 2009, Emma has booked 28 weddings for 2010 and already 13 for 2011 as well as being asked to shoot a wedding in France. She has also had requests from a number of wedding magazines wanting to feature her weddings. Blogging has also connected Emma with people she never thought she’d meet, not only here the UK but as far afield as The States. Emma’s self-confessed obsession with San Diego based FeatherLove Photography happened when she came across her blog. Her work spoke to and inspired Emma and when she discovered that photographer Noa was coming to London in April 2010 she even considered moving her own wedding forward just so she could shoot it! When the reality of this set in (she found out in December that she was coming over in April!), she and fiancé Pete actually made the decision to ask Noa to shoot an engagement session for them. Not only would this have been a fantastic learning experience for her, being able to see her ‘idol’ at work, but an fantastic experience that never would have been possible without blogs (plus I am eagerly awaiting to see the results myself and am looking forward to having the exclusive on sharing them with the world on Rock n Roll Bride once they are all edited.)

Almost thrown into the proverbial Rock n Roll limelight, Emma had to come up with a plan, and fast. “I have actually been acting for the past 10 years and had been learning sign language and was also working within the deaf community which had pretty much been taking up all of my free time but things were going great. Professional photography was the last thing from my mind to be honest! After the enquiries started pouring in I decided to go for it and thankfully I was able to borrow from a family member just enough to get me started and then it was all systems go!  I had to set up a business and make decisions about pricing, packages, any sort of branding and at the same time I was getting pretty much daily emails… ‘I saw your photos on Rock n Roll Bride….are you available on…’  It’s funny because all Pete would hear was me shouting ‘Got another wedding enquiry!’ “

With no real idea of the ‘right’ way to do things, in the same way as can be seen in her organic photographic style, Emma decided to just go with the flow and see how it went. She set her prices at a competitive rate and created a basic business plan by asking advice from a few people she knew in the trade (including Steve Gerard, who I wrote about last month.) The most important thing to Emma however was to keep producing and sharing the photography she loved taking  “I was keeping up with my blog and actually was very determined to be completely honest and open about my journey which seemed to show my personality more which people seemed to like… they felt that they knew me.”

I feel very excited and lucky that blogging has brought me and Emma Case together. Not only am I beyond excited to see how she progresses over the next year, I am honoured to call her my friend. We both share mutual obsessions with cats, sushi and all things ‘retro’ and when we meet we have such a laugh together I can’t even explain…oh the in-jokes! Last month we did a photo shoot together with a vintage dress that was loaned to us by the Carnaby St based, Fur Coat No Knickers – again a company I never would have known about or felt comfortable to ask for a favour of without getting to know them through blogging and Twitter (if you’re interested in seeing this shoot it should be on my and Emma’s blogs by the time you read this.)

Emma’s self-confessed passion for shooting real people and their perfectly personal wedding is truly apparent in her work. We have spoken many times about how great it would be to only shoot alternative, quirky and Rock n Roll weddings with beautiful details and happy, smiling faces. And while, as lucky as I am to be able to only blog about the photographers and weddings I really adore, it would appear that Emma too has so far been really lucky with the type of client she’s attracting with her unique style – a couple that want something ‘different.’ “I just hope they don’t pick me because I’m the cheap new girl!” Emma jokes. 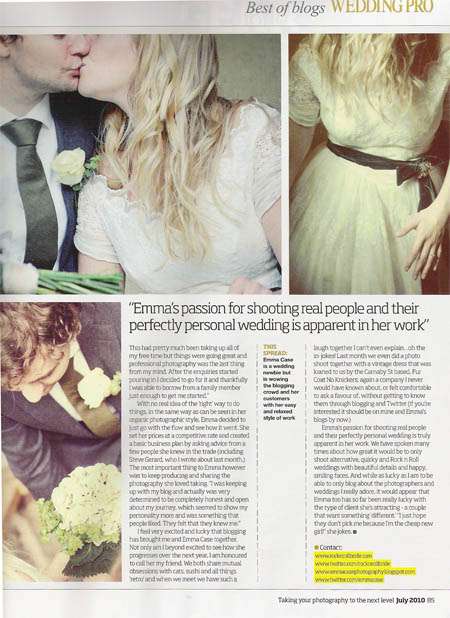