I love  a quirky London wedding just as much as the next person so I whooped with joy when Connie & Jonny’s was send my way. “We wanted to bring all our friends and family together for a massive party to celebrate us getting hitched” the bride began. “We kept certain traditions – getting everyone to sit down and have a big feed, and speeches etc, but we weren’t keen on all the flowery formal bits, so to keep things lighthearted and personal we had the lovely ukelele band.  We put our friends and family on a routemaster bus back to the reception (at Lena Restaurant)  Amazing food, great party space downstairs with loads of champagne.  A friend drove my dad and I to the town hall in his VW camper van, and took Jonny and I (with music booming, a healthy supply of champagne) back to the reception (we drove back via regent’s park and stopped off in the sunshine to take it all in). Not really up for flowery delicate invites, we got Hanway print centre to print us some bright orange postcards. Jonny’s dad made the wedding cake and my mom and friends organised the flowers.” 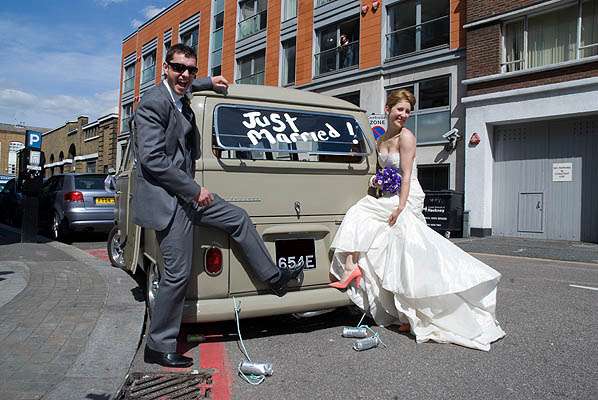 “Having trawled a bunch of snazzy shops for wedding dresses (and baulked at the prices!), I popped into Losners, a local bridal shop just up the road from me in Stamford Hill N16 for their sample sale.  They had loads of glittery stuff in the window which wasn’t my cup of tea, so I didn’t hold high hopes, but I spotted my wedding dress in their sale, bought it there and then, and carried it home in the snow! I think the dress was a Spanish designer, but I can’t remember the name I’m afraid. It was much more of a ‘wedding dress’ than I’d imagined getting, but it was such fun to wear!” 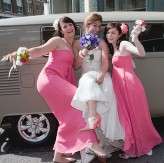 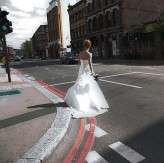 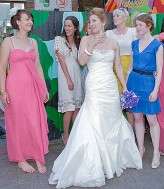 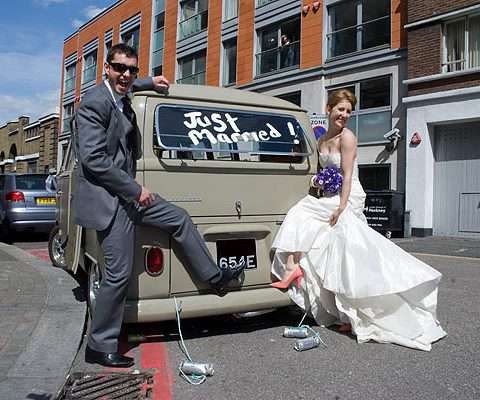