I am loving this chameleon-esque Bride!  This cutie couple were lucky enough to get an array of talented photographers to take photographs of them!  I really wanted to share both their bridal shoot, taken by Brian Bastinelli (the photos with the red hair) and their fabulous wedding photographs, taken by the genius that is John Michael Cooper with you right now.

Staysi sent me a fantastic description of their day..hey, she sounds just like me!
Our wedding and ceremony were located at the Las Vegas Art Museum.  my black and white dress is Watters and the short white dress is Betsey Johnson. Dave is wearing Armani with custom chuck taylors with our wedding date embroidered on them.  I think our wedding was rock n roll because we didn’t try to be anything we weren’t.  Dave wanted to wear chucks, I wanted pink hair, and I did not want a white dress!  Growing up in Vegas and going to a million weddings, I knew I did not want the typical Vegas wedding at a casino banquet hall  where you could take a picture and basically change out the heads on the bride and groom and you wouldn’t know whos wedding it was.  I wanted a wedding that no one else has ever seen or been to.  We also skipped a lot of the traditional wedding things that didn’t mean anything to us and added things we thought our guests would love.  Basically we just wanted a big party, and from what everyone still says about it, we succeeded.

As always, I am loving all my wonderful readers right now, thanks so much for sending these my way Staysi! 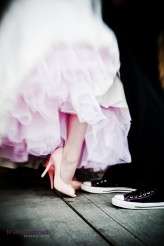 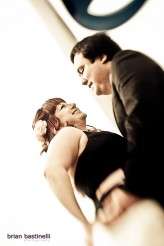 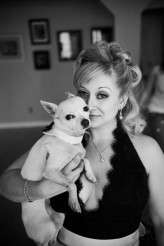 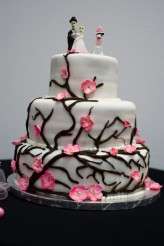 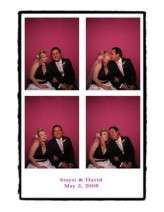 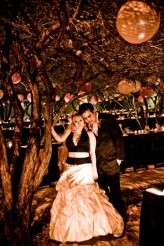 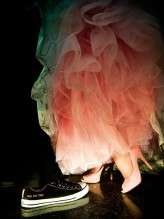