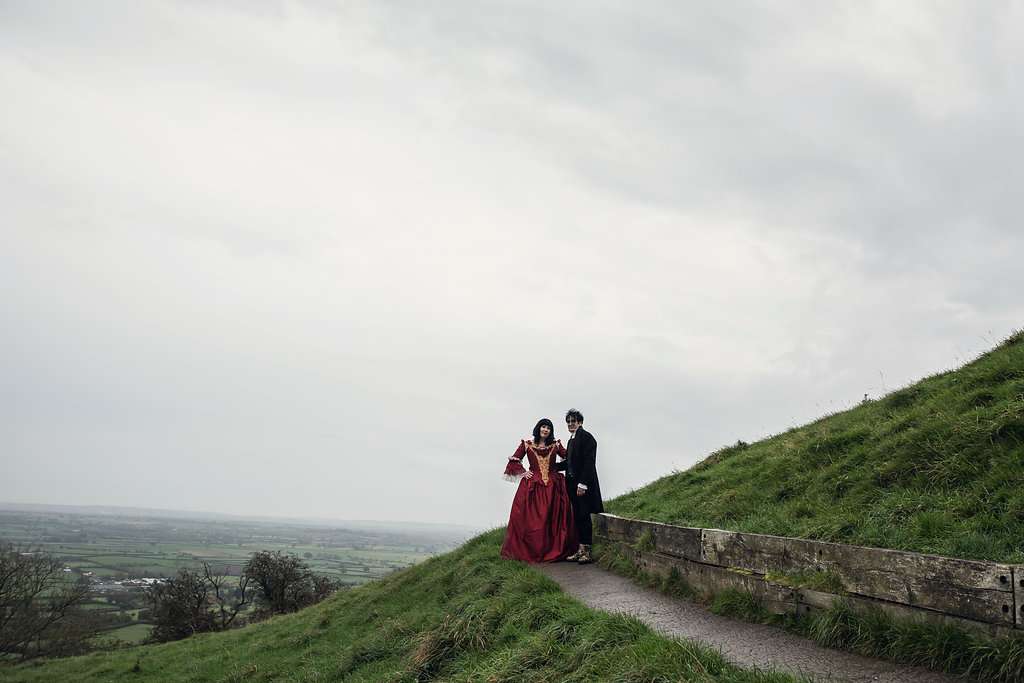 Living in Australia, Saskia and Sean met through the emerging alternative music scene in Melbourne in 1982. Sean was in a band, EDEN, and travelled a lot so they lost touch over the years but reconnected in 2016 when he was on tour for his sixth album. They were married in Glastonbury, UK, which they chose for it’s obvious connection to music and Paganism.

“We met again at the end of 2016 when Sean tracked me down”, Saskia explained. “We met a few weeks later, fell madly in love, were engaged the following year and married the year after. Nothing has changed – we were best friends then and remain so. We were destined to be together.” 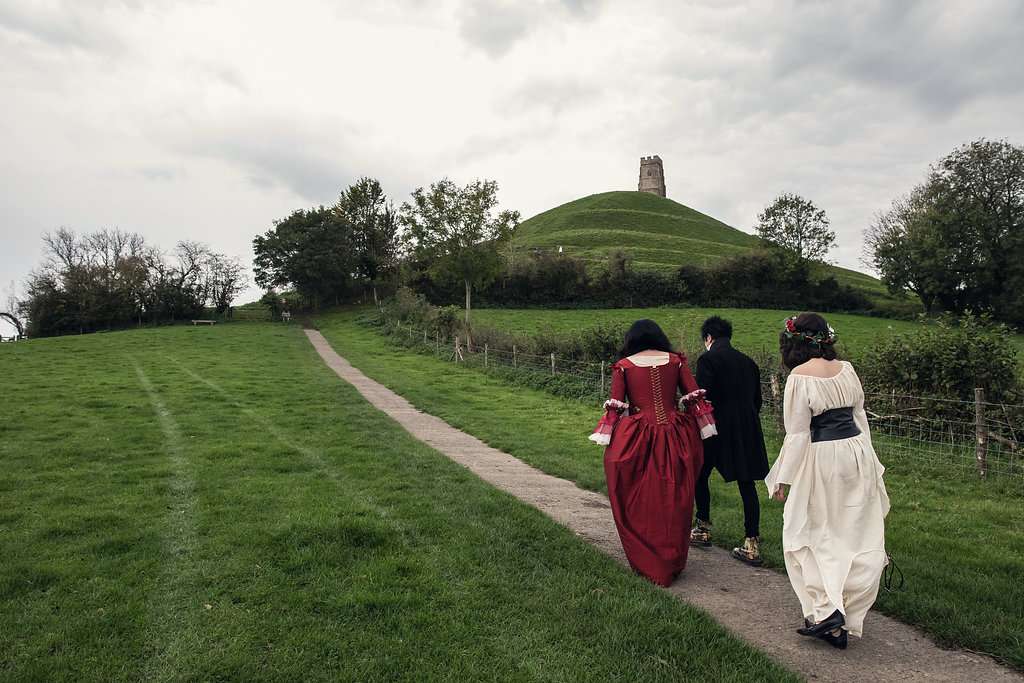 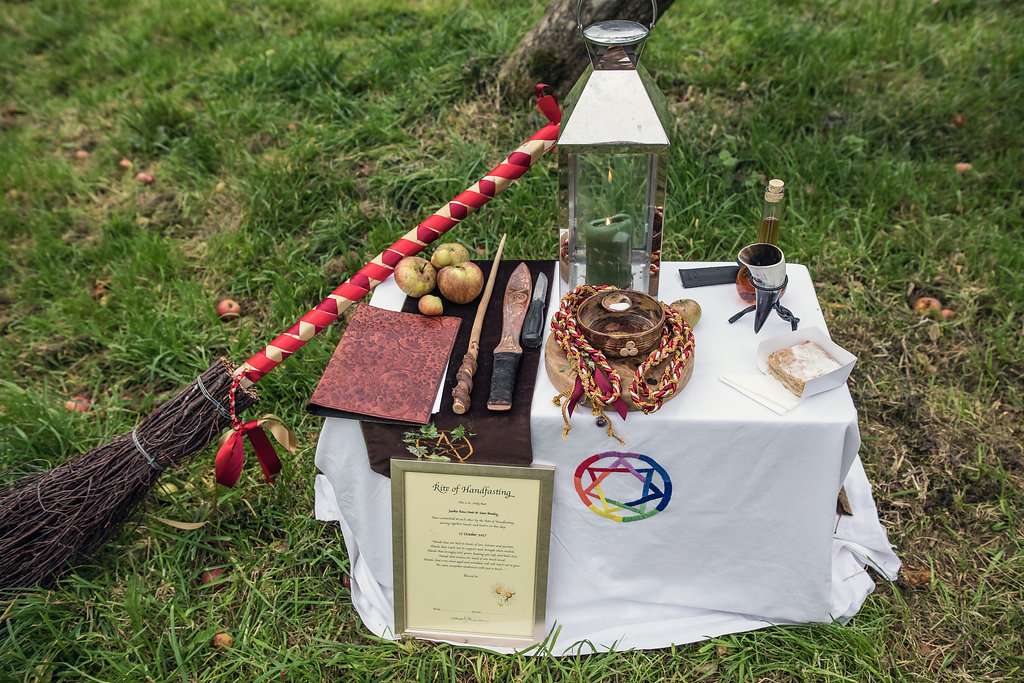 The inspiration for their wedding was obvious: Their own lifestyle. “In Australia, we live in a small romantic Cornish miner’s cottage built in 1863 in the heart of the Victorian goldfields”, she said. “The cottage backs onto a steep hill with a gold reef running through it. This is what we fondly call our ‘Tor’ and was the setting for Sean’s proposal. Having both visited Glastonbury in the past, the temptation to exchange vows at the Glastonbury Tor seemed logical and destined. Arthurian legend and the history and mysticism surrounding Glastonbury have been a key inspiration for Sean’s music over the years. Our clothes were inspired by the gothic alternative scene we are a part of in Melbourne and the music scene that has been a part of our lives since we met in the eighties.” 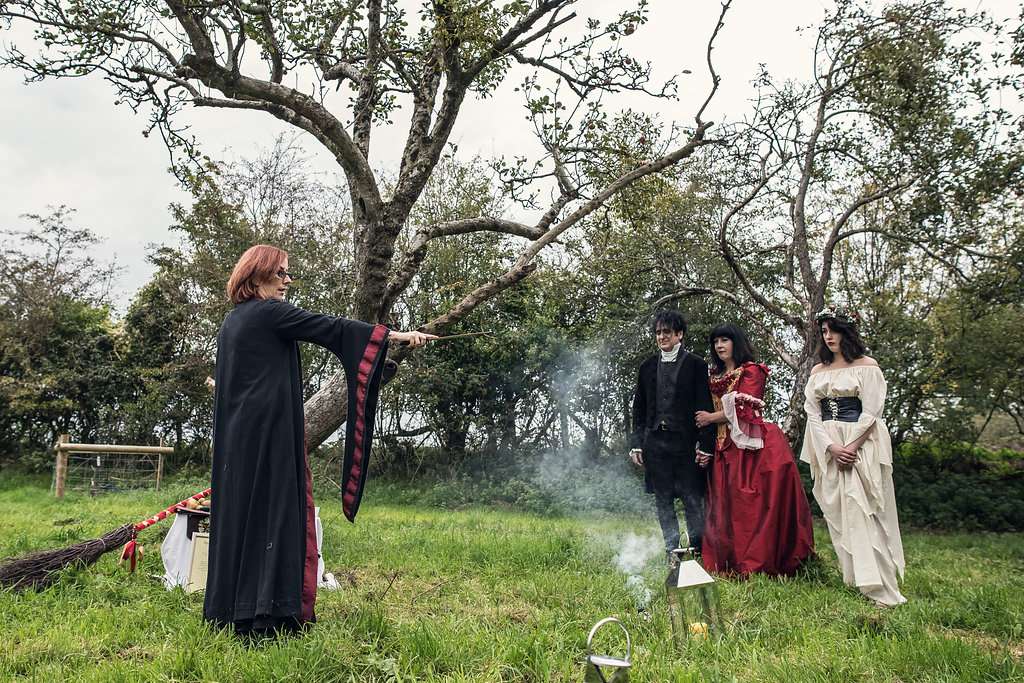 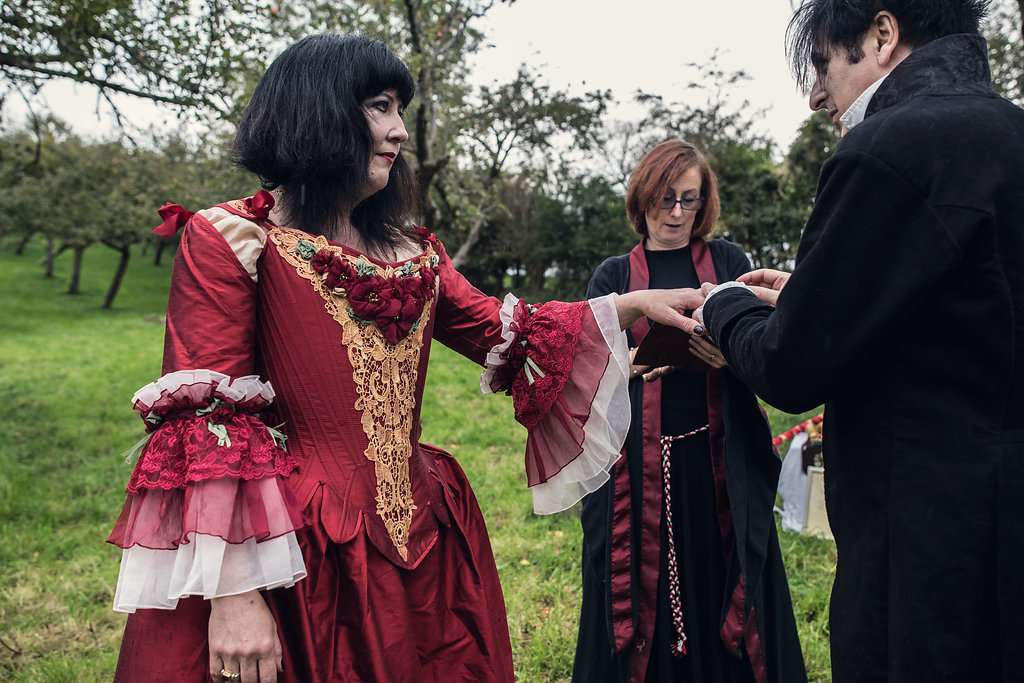 As they travelled halfway across the world for their wedding, they had to keep things small, only inviting their daughter to attend. They hired a High Priestess to perform an ancient hand-fasting ceremony. “The ceremony, officiated by High Priestess Jacqui Thakway, took place in Avalon Orchard at the base of the Glastonbury Tor.  She called upon the elements and invited the God and Goddess of Old to bless our union. Our wonderful daughter bridesmaid, Holly, assisted as altar girl, playing a central role as our ancient wedding rite was performed. Earth magic and the ancient energy of eternal wisdom was thick in the air. This was the day when two soul mates were married and a new family was officially born.” 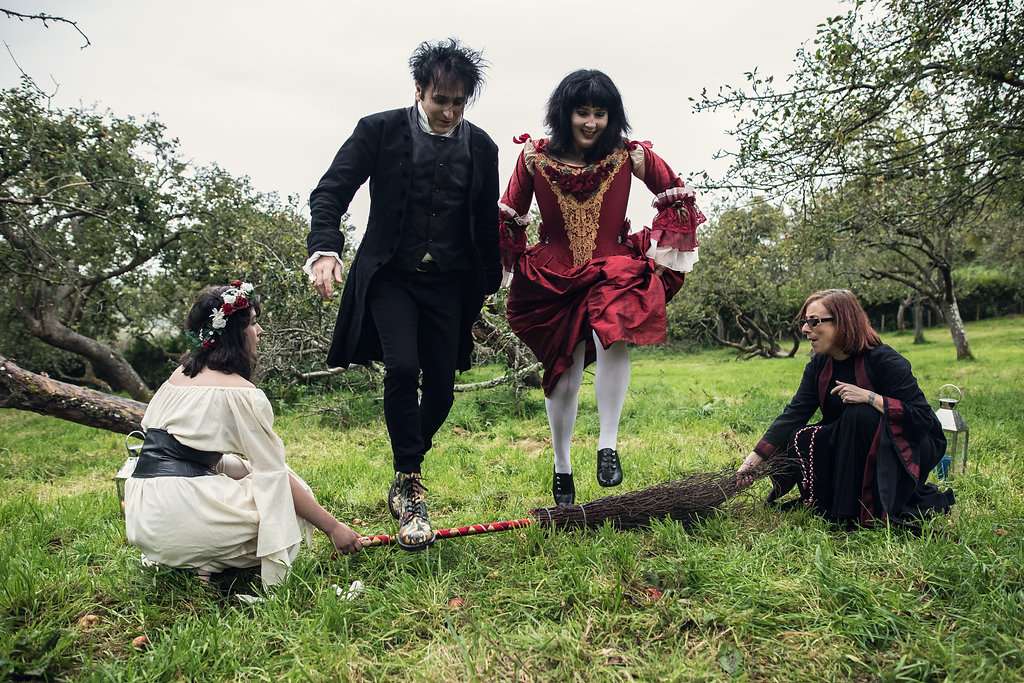 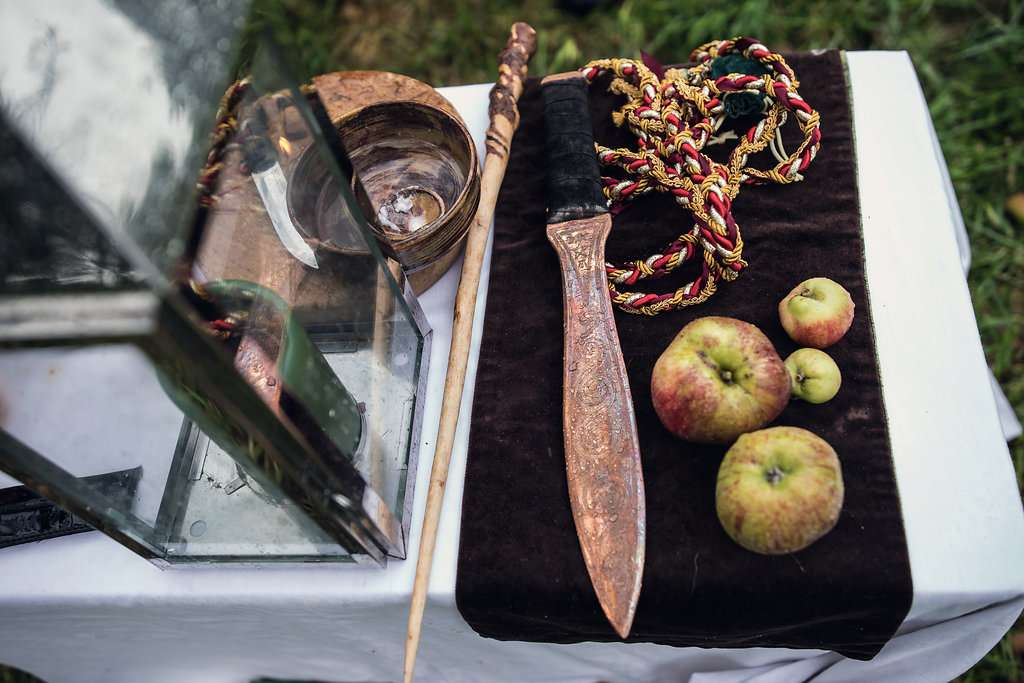 After the ceremony and photos, they headed to The Covenstead, a Pagan-themed bed and breakfast with for more photos. They ended the night with fish ‘n’ chips on the church steps (as they forgot to book somewhere for dinner!) However doing things this was did really keep the costs down. “We saved money by keeping the ceremony simple and meaningful without the need for guests or a formal reception. Although we were not driven by finances – our key motivator was to preserve a moment in time that was about us and our daughter and the formation of a new family.” 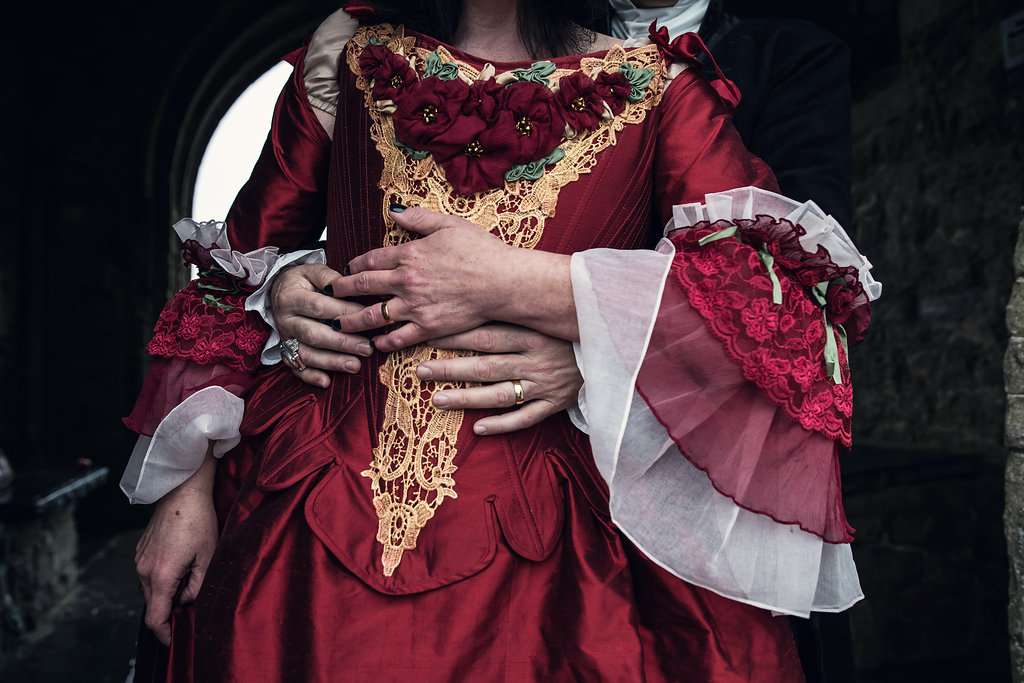 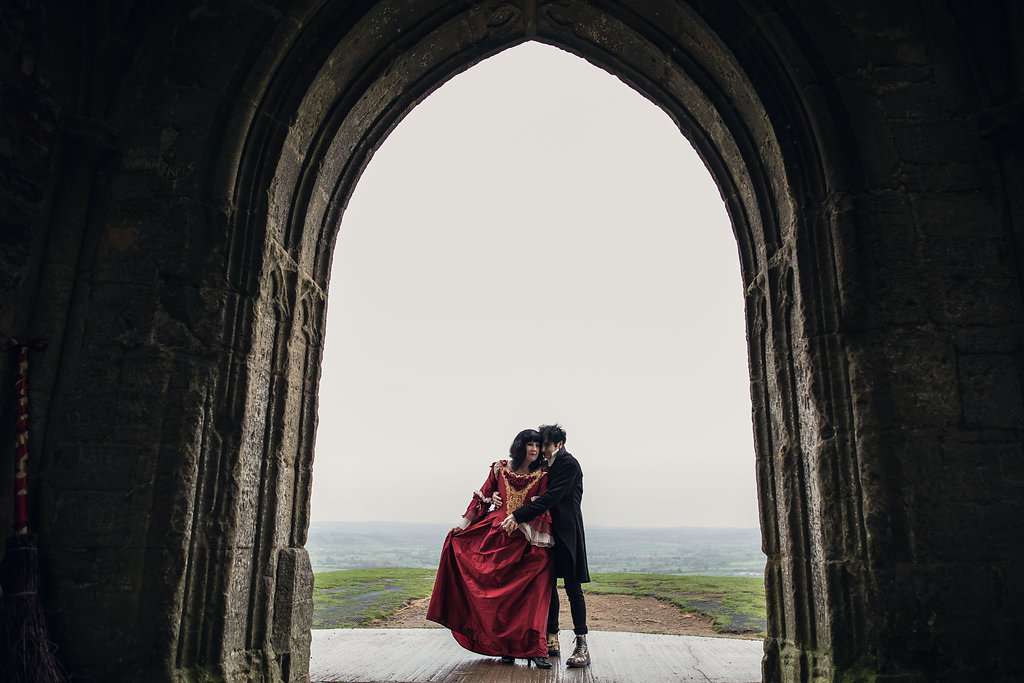 “There is nothing we’d change about our wedding”, they concluded. “Follow your heart’s wishes for the day. Keep it simple, beautiful and meaningful. Share it with those who matter.” 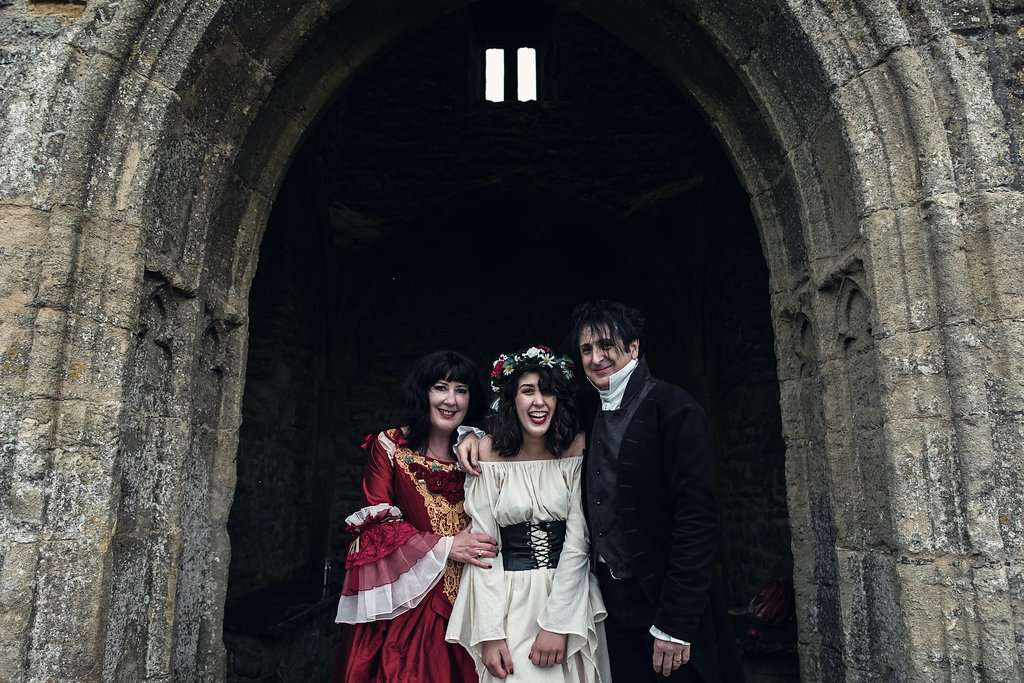