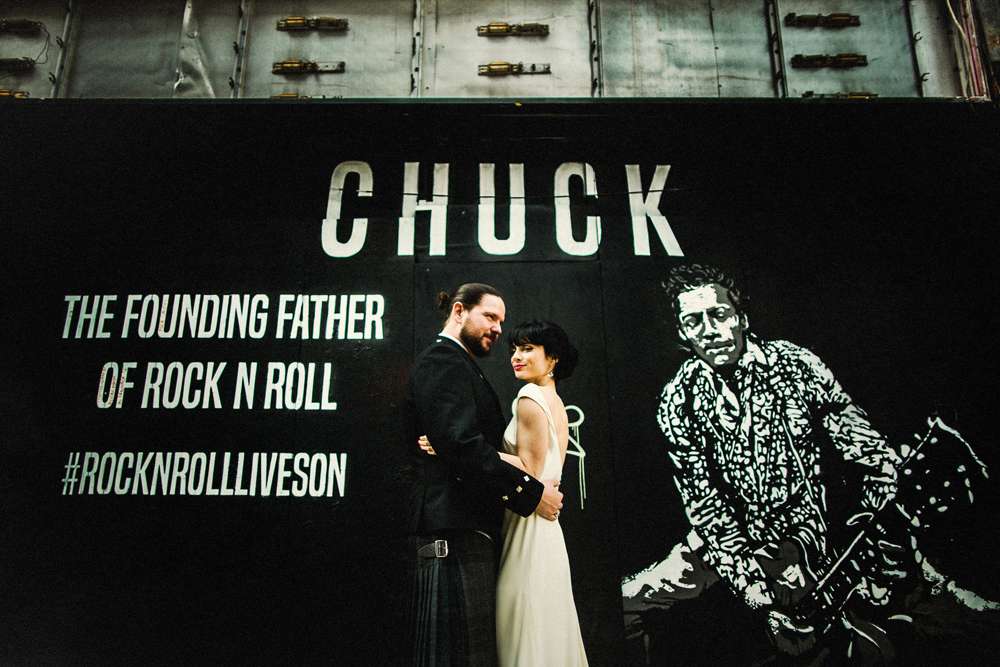 Lottie and Dave were married at the Union Club in Soho, London. As they planned everything from Hong Kong, where they now live, they didn’t see it until two days before the wedding but it ended up being completely perfect for what they wanted. They didn’t want a specific theme, just for it to feel like them. That meant photos in guitar shops, Chinese Lucky Cats, the men in kilts, NOLA jazz and a live jam session. 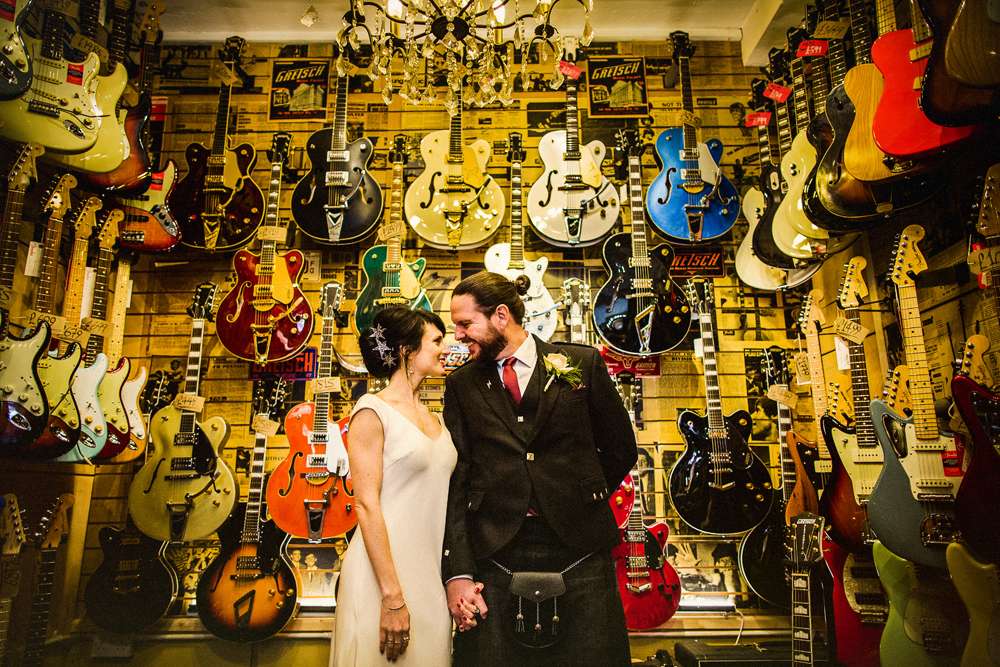 “Soho played a major part in our relationship”, began Lottie, “we hung out in Denmark Street’s music shops and drinking holes, and my first apartment was in a mouse infested studio above the 12 Bar. Eclectic flamboyance, Rock n Roll, neon lights and vibrant diversity sum up our home from home. The most important thing was that there was more party than formality! We kept the traditions we genuinely loved, and threw caution to the wind with everything else.” 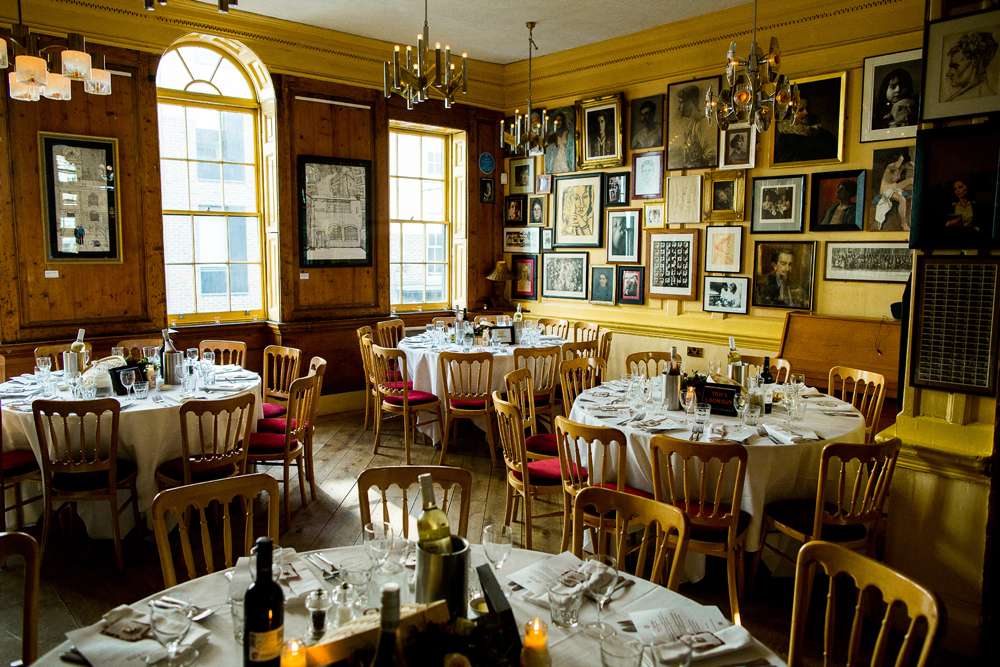 “We also wanted to bring elements of our Hong Kong life to London – from the stunning floral dim sum basket centrepieces, to the table names named after HK bars we drunk dry after our legal wedding and the Kowloon Dairy milk bottles that we DIY’d into candles.” 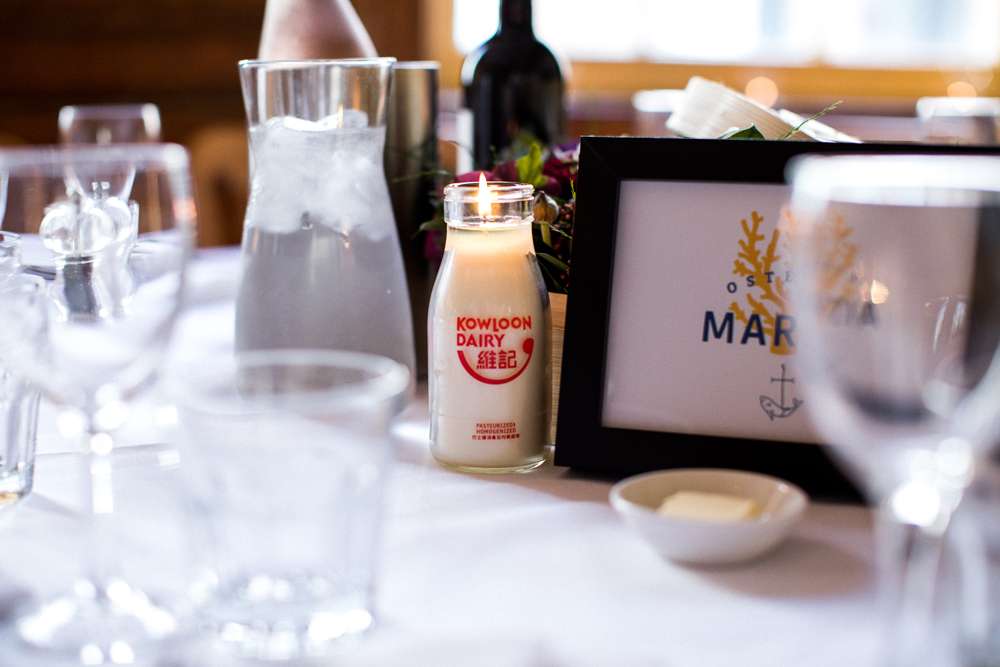 Other DIY projects included the cakes made by the mums, the stationery which they designed themselves and the confetti made by Lottie’s nan and mum using flowers from their gardens. “The cakes were beautiful. We didn’t need much décor as the Union Club is stunning, we just added a few personal touches. We also made Rock n Roll fortune cat pin badge to use as favours. They were personalised using our new ‘Longford Kerr’ joint crest which Dave designed. The crest is on our wedding ring too. I opted for a signet ring instead of traditional ring.” 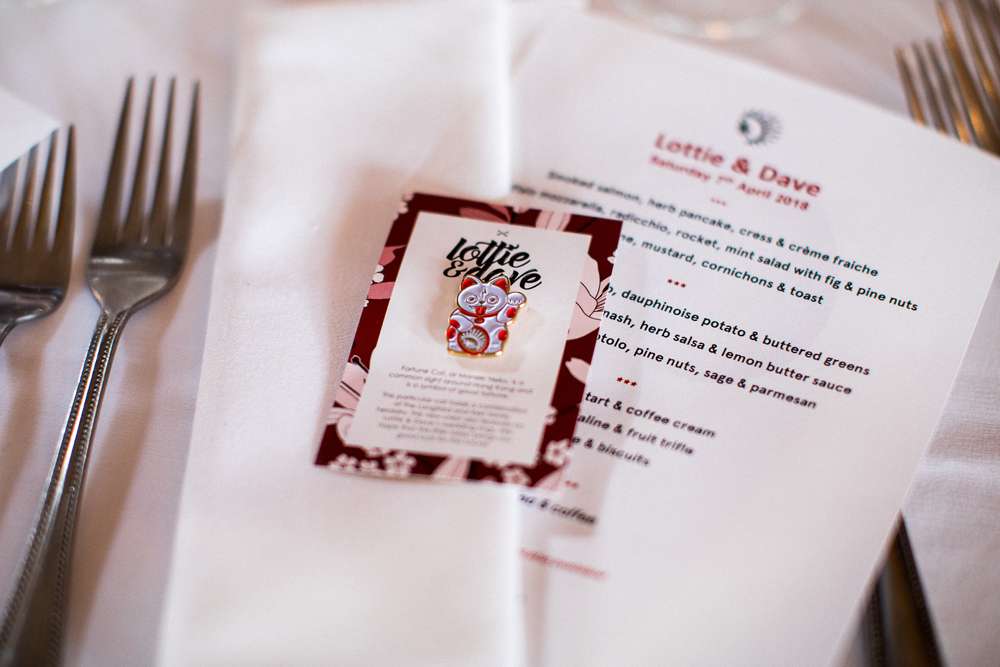 Lottie wore a stunning Sabina Motasem dress that got in the sample sale at Rock The Frock. She wore it with Crown and Glory star hair clips and a custom Magpie Creative jacket. “I was so lucky that Lorna did a short turnaround on my custom jacket when I decided to opt for one after seeing the weather forecast about four days before!” she said. 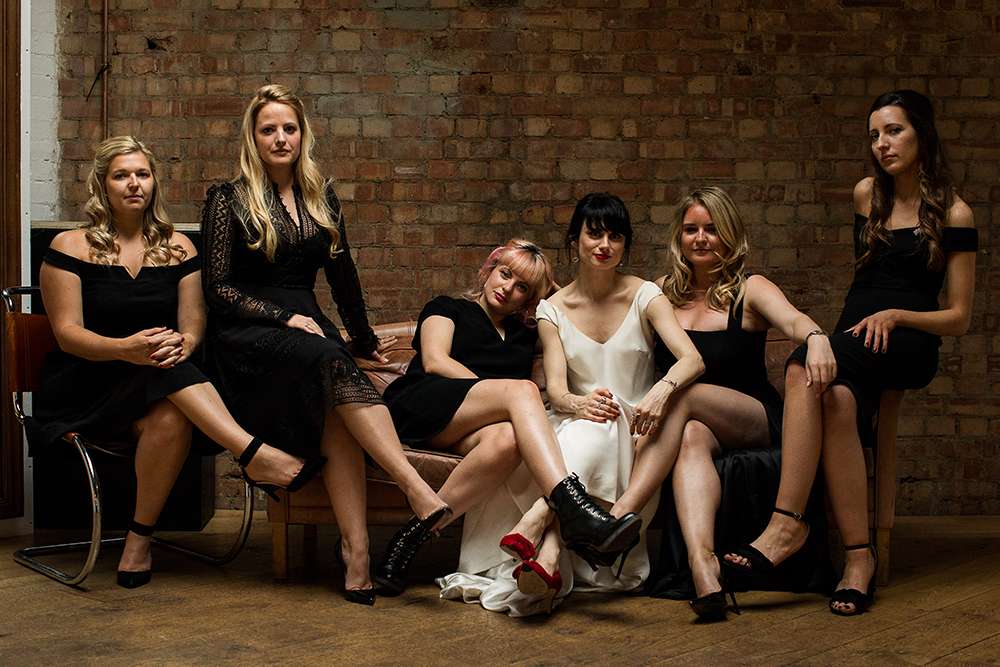 Music also played a huge role in the day. “We really love Rock n Roll and NOLA jazz, so we trawled google for London bars featuring the music we wanted. We found DJ Lil Koko, a New Orleans specialist, who live-jammed with Paddy Milner on keys. It was such a highlight!” 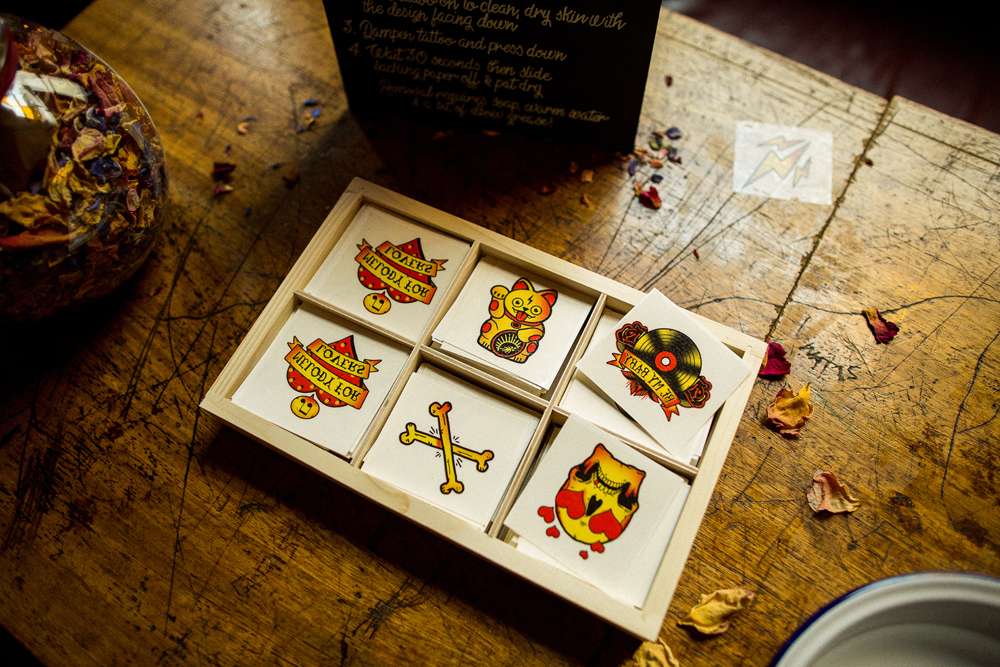 “The best thing about planning our wedding was making it so personalised”, Lottie concluded. “A bit more time between the wedding, and hitting the ground running on return to Hong Kong would have been nice but we felt so lucky with our suppliers, many of them felt like an extension of our friendship circle – impressive given our prior contact was merely Skype! It felt natural having our gang of experts so genuinely involved and happy during our day.” 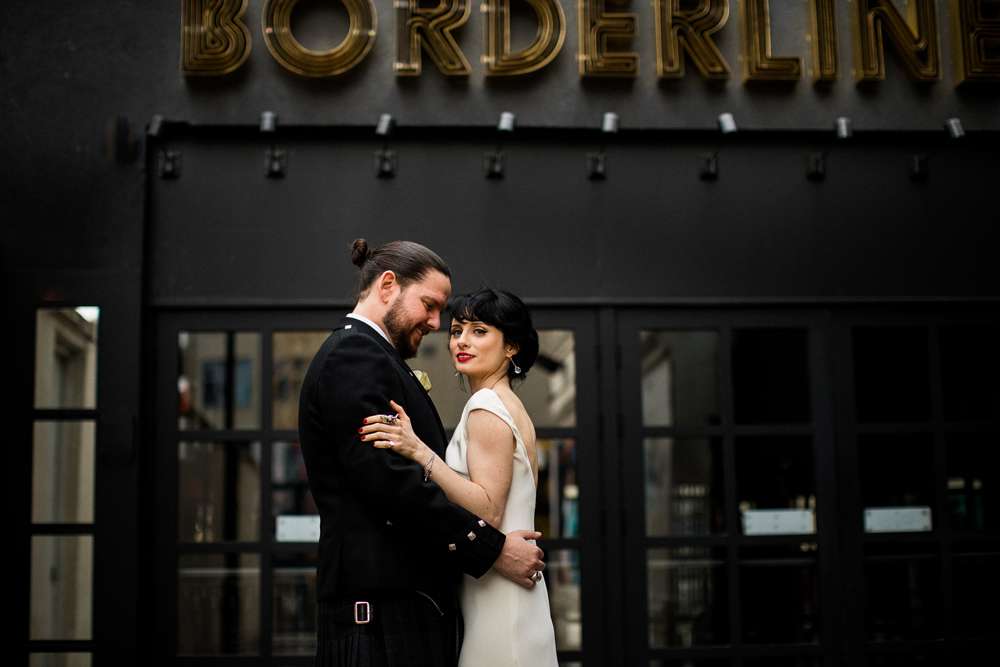 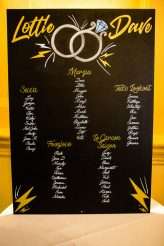 Scott and Hayley were married on Halloween but they didn't want to make the obvious choice to have a spooky themed wedding. Instead they were inspired by vintage pieces (the bride wore a dress from the 1940s), and Victoriana with a Rock n Roll twist. Of course there were a few autumnal touches such as pumpkins on the tables, but overall it was just a reflection of everything they love.

It's not everyday you see an insect themed wedding, so needless to say I was both grossed out and super excited (in equal measure!) when Tessa and Matthew's wedding landed in my inbox. The bride is an artist, known for her work consisting of insect carcasses, plant roots and other found materials. So, clearly, her wedding was never going to be 'normal'. Even the wedding cake had sugared caterpillars and insets crawling all over it and one guest even showed up with real ants and beetles stuck to his bald head!