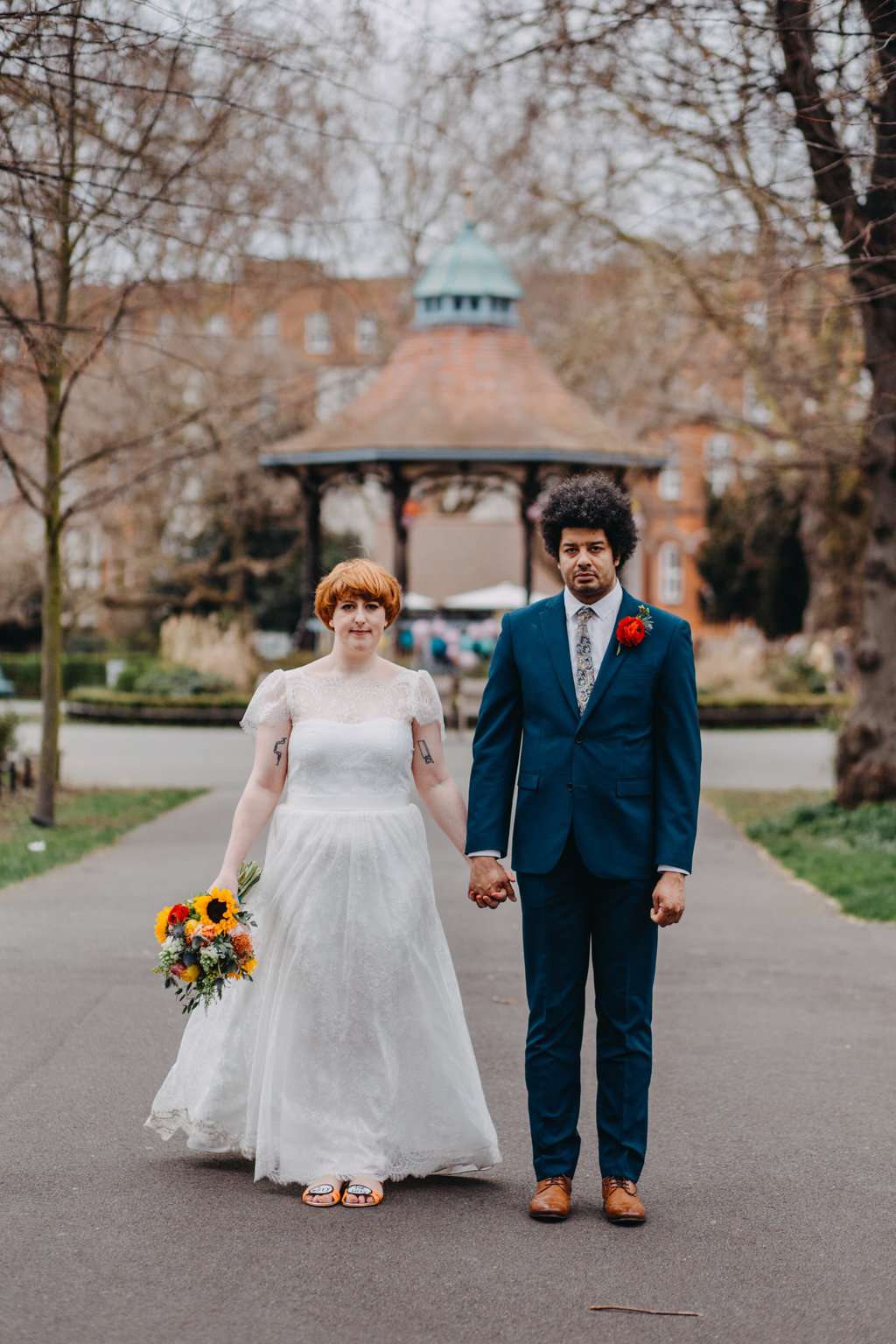 It came very naturally to Zoë and Gav to have a day that reflected their true personalities and to make choices that felt right to them.  “I’ve never understood why girls who have never set foot in a national trust in their lives suddenly want to get married in a stately home,” said Zoë. “Maybe its just nice to be someone else, someone more fancy and regal for a day?”

Working in a banqueting department of a hotel as a teenager probably didn’t help with Zoë’s frame of reference for traditional weddings – seeing the same puffy dresses, Abba medleys and enough royal icing to survive a nuclear war week-in, week-out would be enough to make anyone ensure their own day was fiercely unique to them, a celebration of both of them as individuals, and their joint lives together. 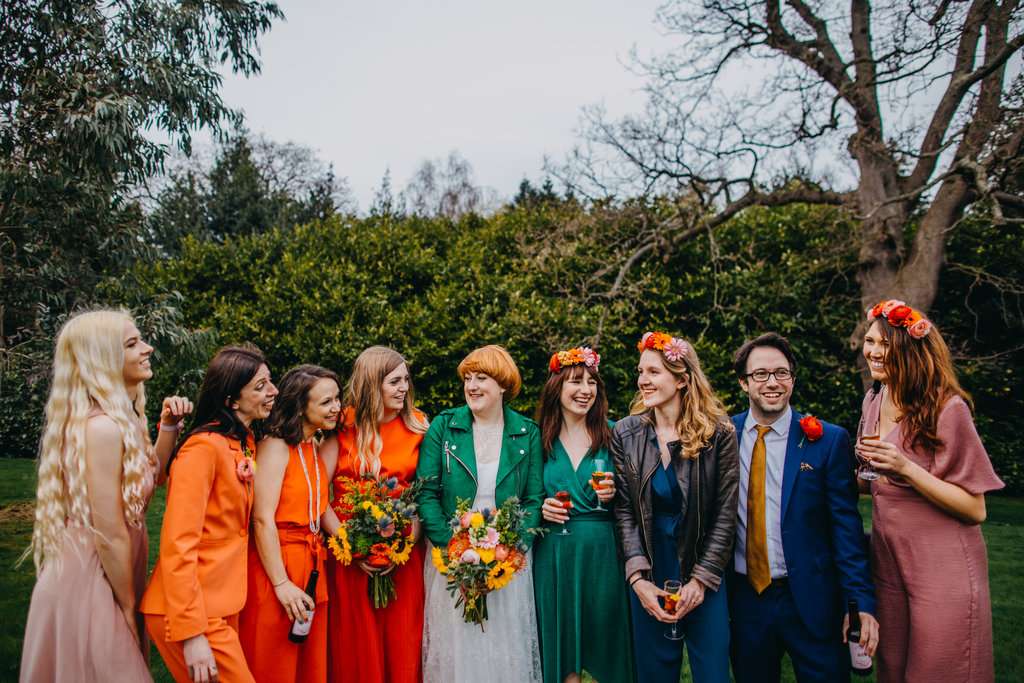 Their ceremony was held at the bandstand in Myatts Field Park, London. Zoë and Gav spent seven years living right by the park and walked their dog in it every day, so it was a poignant place for them to say their vows. “I purposefully used a gate quite far from the bandstand so we’d have a really epic aisle to walk down,” continued Zoë. With both her mum and dad walking either side of her and her multicoloured bridesmaid and bridesman squad walking behind, they made quite the powerful entrance to their guests eagerly waiting at the bandstand! 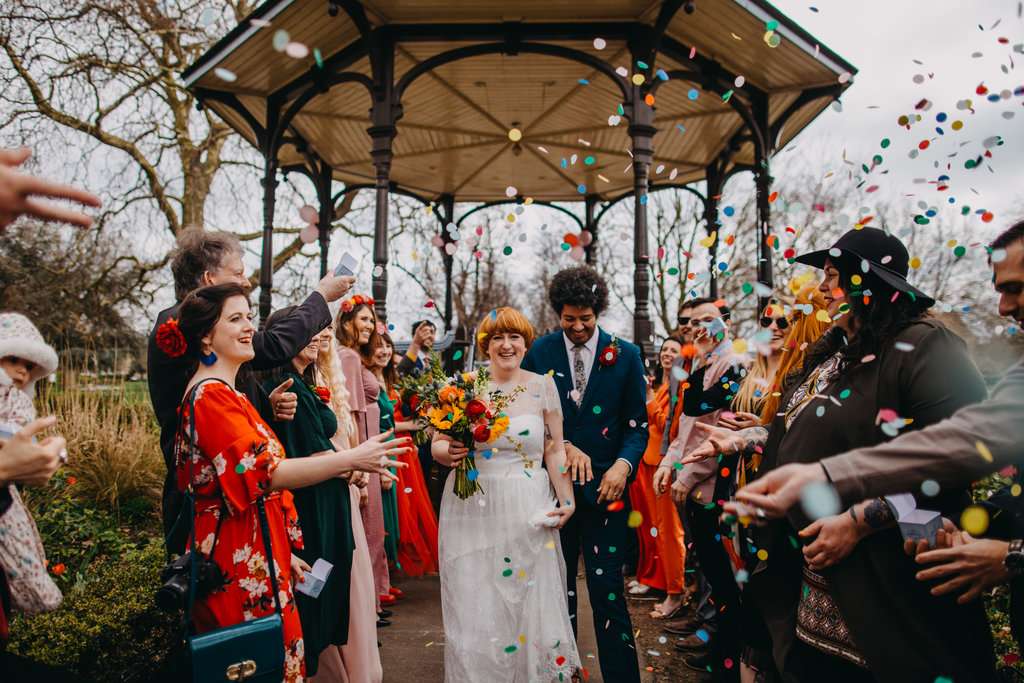 “As all my squad are amazing, inspiring, independent women, I wanted their outfits to reflect their individual personalities, so I gave them a colour palette to work with and told them to pick out something they felt incredible in. We had a trouser suit, some ASOS dresses and jumpsuits and a long sold-out velvet jumpsuit scored on eBay. We got to do this epic stomp through the park to the bandstand and they all looked so amazing!” Zoë also did different flowers for them all too instead of bouquets – some had hair garlands, wrist corsages or lapels. 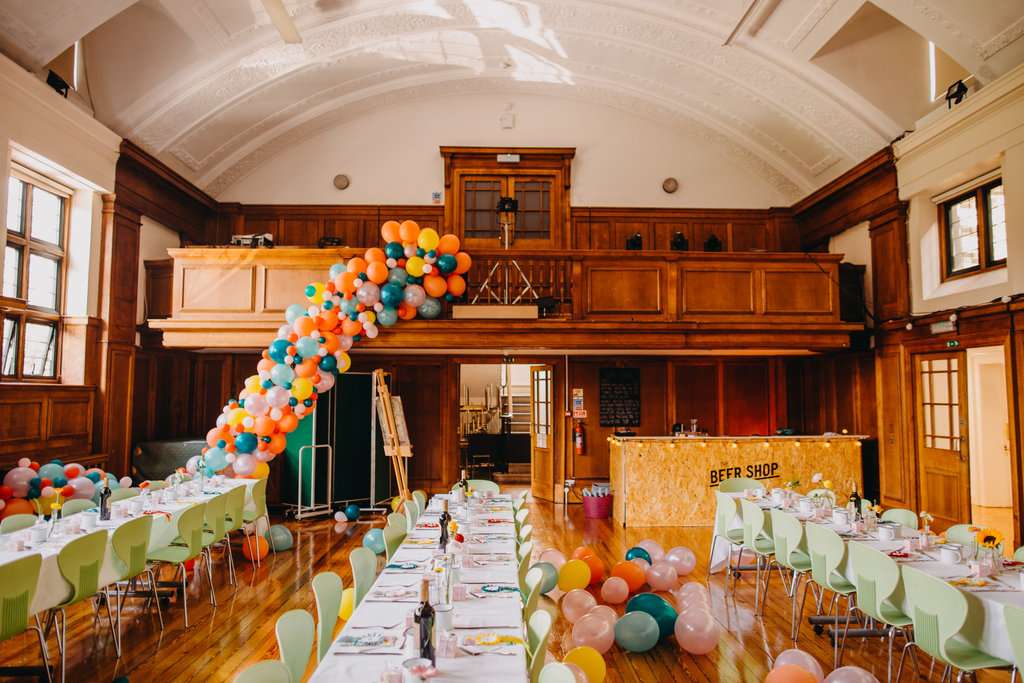 Unfortunately Zoë didn’t have such a bad-ass experience when it came to picking her own outfit. “I found wedding dress shopping very traumatic! I went to one of those places that make you walk out of the fitting room without even seeing yourself and stand in front of some ridiculous faux gilded mirror in front of ten other brides and their nearest and dearest. It was truly awful! My fitter looked at me and said ‘You’ll be a size 20 US’, I questioned her as I’m a 10/12 but she said they come up small. She then proceeded to put me in many oversized ill-fitting dresses with so much padding that they levitated above my boobs and so many bulldog clips in the back that I was basically carrying 10lbs of metal. After that I didn’t try anything on for months and months convinced I’d never find one.” 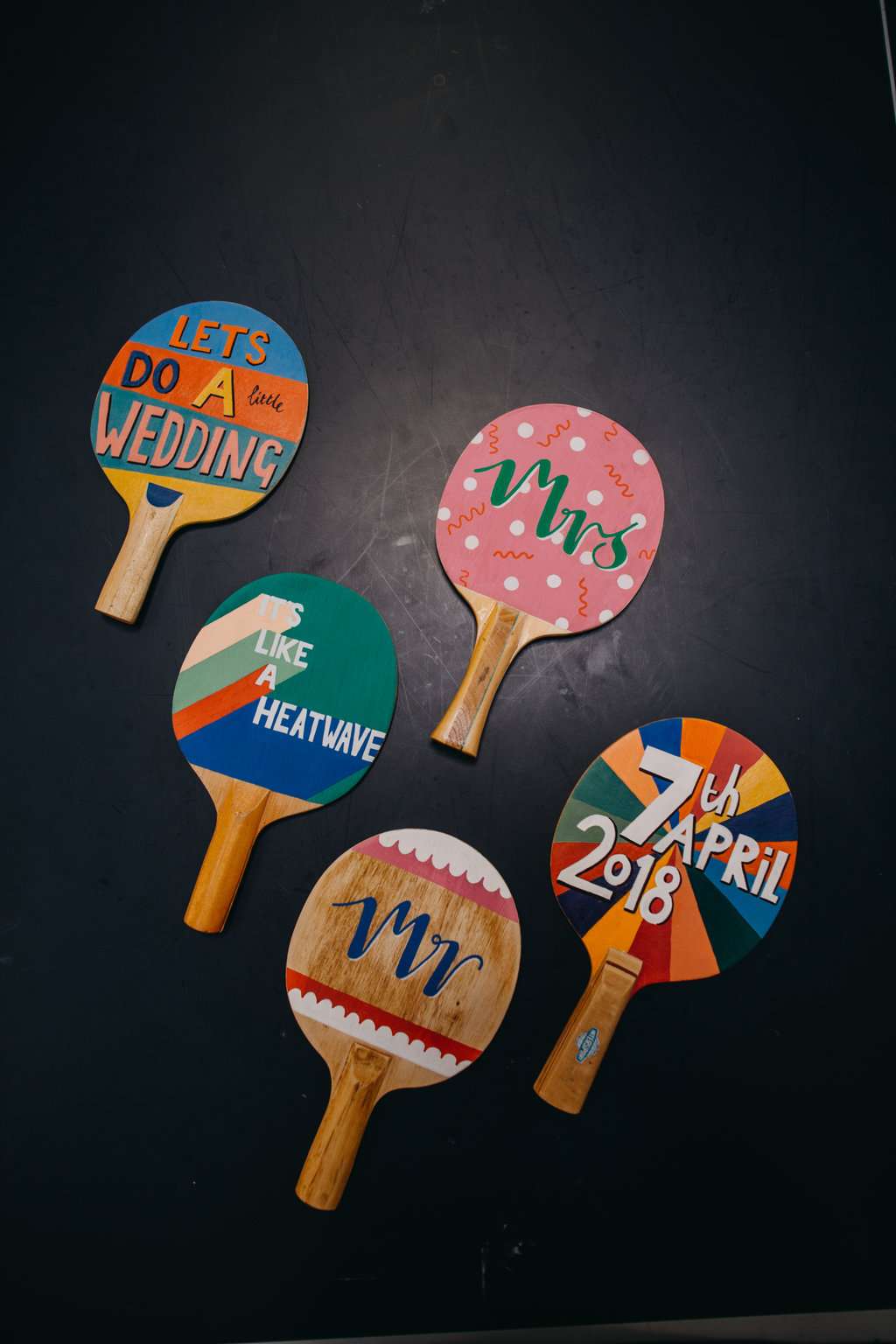 “In the end I decided to design one and got it custom made by Bridal Alterations. It was made completely from scratch and the first time I tried it on it fitted! Like zero alterations! First time! We were both so stunned we stood there in shock just saying ‘oh my god’ repeatedly. And then when we were finished we said ‘Oh my god’ some more!”” 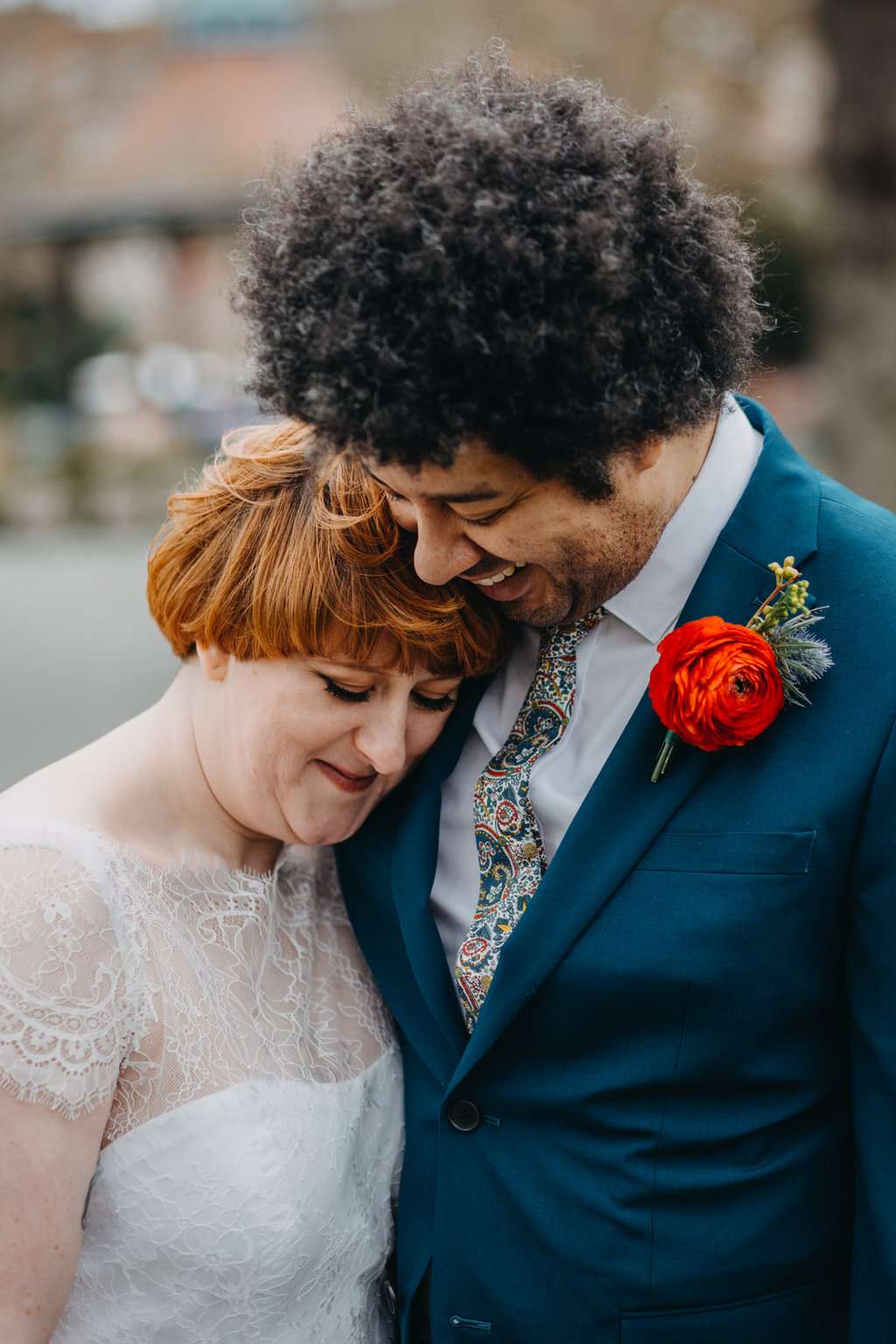 She also did a very ‘un-Zoë’ thing and had a costume change, complete with grand entrance. “I’d coveted this insane sequin number by Australian label Gorman for so long that, when it went on mega-sale I just knew I had to have it. I also put sequins and glitter all over my hair and eyes and did a not very me ‘grand entrance’ I usually hate being the centre of attention but for once it just felt like the right thing to do. If you’re gonna wear something like that you have to go all in. It sounds quite self indulgent (see also £££) to have two dresses but it still cost less than anything else I tried on!” 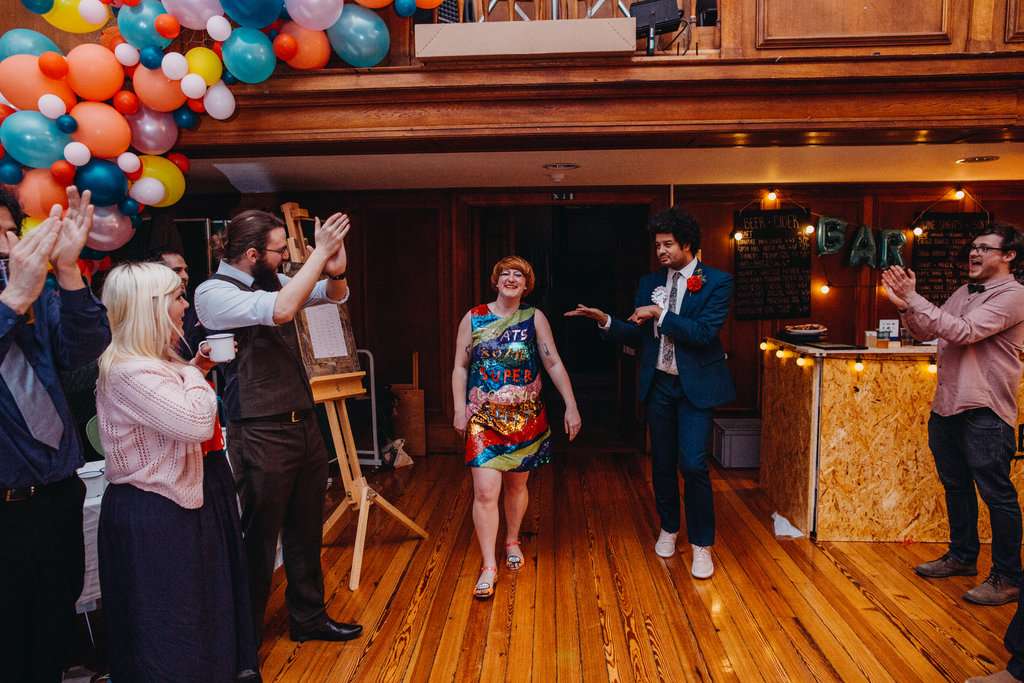 As a designer-maker, Zoë hit the jackpot when it came to DIY-ing the elements for their colourful, Wes Anderson inspired wedding – she got to spend her days doing stuff she LOVES! From the incredible balloon arch to the crazy-golf hole portraits, the stationery to the flowers picked up at the market the morning of the wedding, Zoë designed and made everything herself, or employed the help of talented friends and family to help her with.

“We figured if we were going to spend all our pennies on a wedding, we should pay out talented friends to help us, or do it ourselves,” said Zoë. “Plus I’m too stubborn to admit there’s anything I can’t do… If I didn’t want to hang out with my pals I probably would’ve done the cooking as well!” 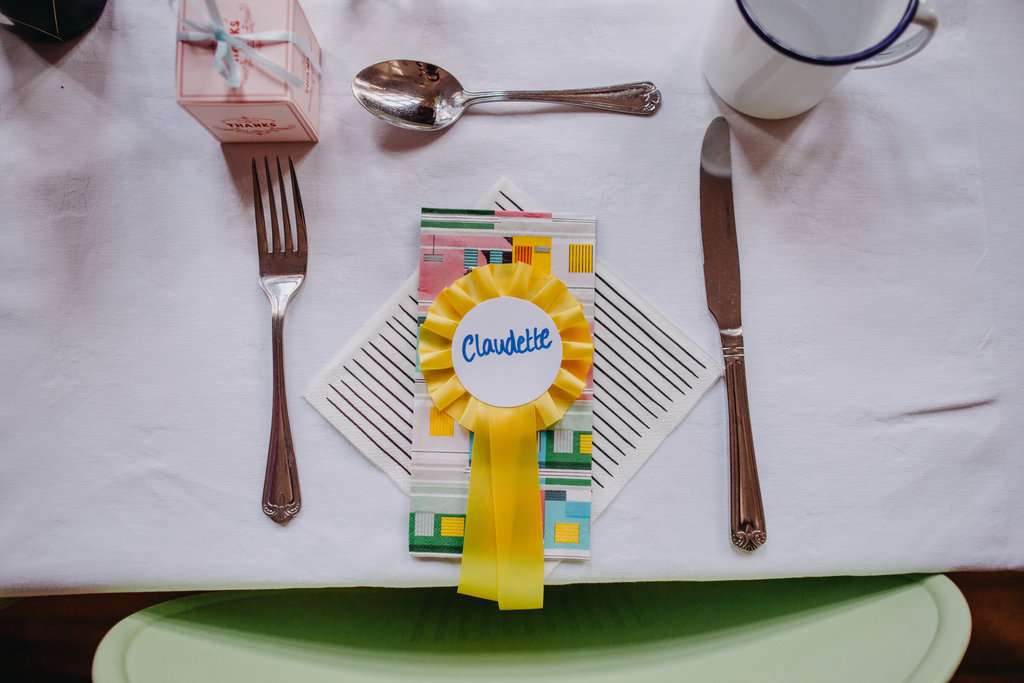 “I designed custom labels and had them for one of the welcome drink options. I nearly forgot to save a bottle as a keepsake, but thankfully found a lonely bottle the following morning!” Their cake, a colourful, two-tier lemon and rosemary and chocolate, lime and tequila creation by Lillyput Bakery, was decorated like a multicoloured abstract painting, and Zoë added some flowers on top to tie it in with the room. 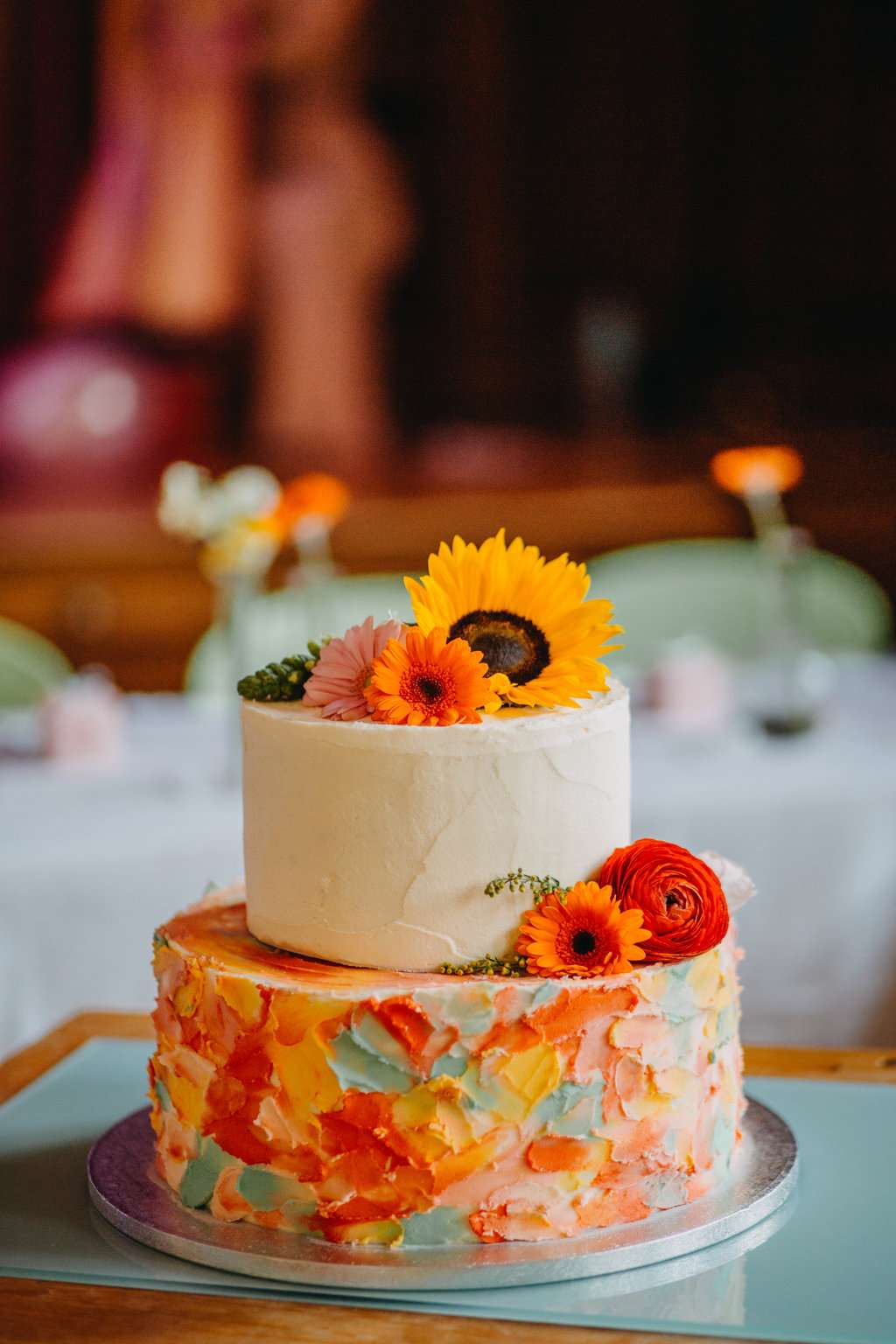 Talking of the room – the school that Zoë and Gav held their reception at was originally supposed to be a bright white, blank canvas of a space; perfect for any creative to let their vision come to life in! But when it had to change to the traditional, dark, wood panelled room, Zoë’s vision was not perturbed. She constructed the epic balloon arch herself, up until 4am the day before the wedding but worth every glue-gun burn she acquired during the construction. Alongside test tubes loaned from the science-lab to fill with flowers as centrepieces, the couple also borrowed a ping-pong table for entertainment; and hand-painted a bunch of vintage bats to go along with it. With further musical entertainment by friends and family, and a DJ, they parted so hard that three people ended up on the floor – the bride included! 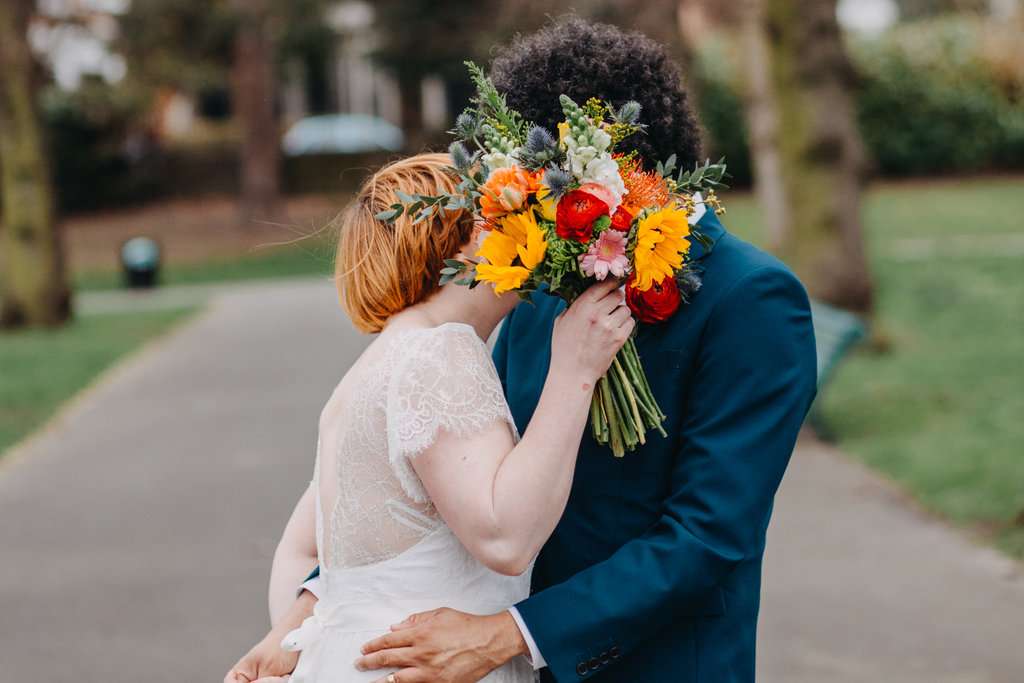 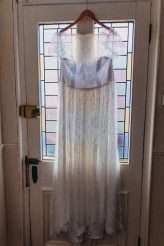 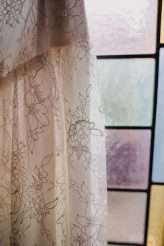 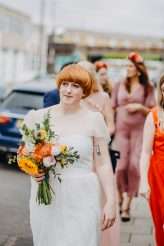 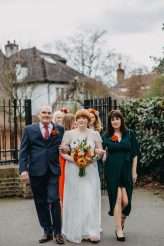 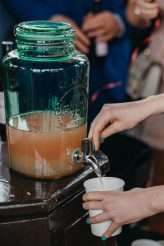 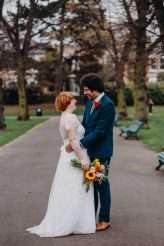 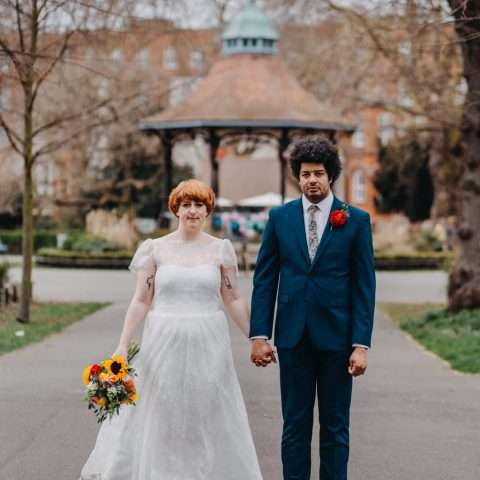 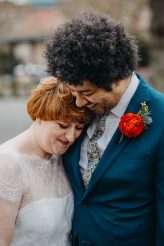 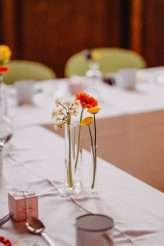 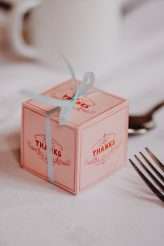 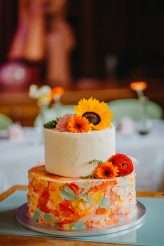 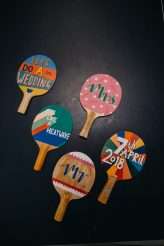 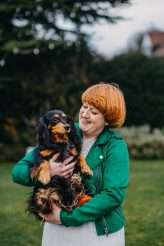 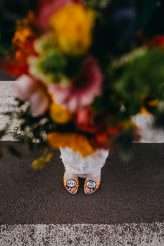 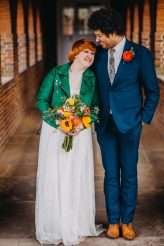 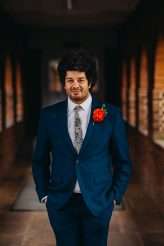 Stacey and Ian's wedding was held in South London, where they live. "We live in Wandsworth, so we wanted our wedding to reflect our love for our lovely borough", the bride said. "Admittedly, it isn't as cool as Camden or as high brow as Chelsea, but it is sweet and friendly. We chose the grand chamber at Wandsworth Town Hall for our ceremony which was absolutely beautiful."