Cassandra and Howard were married at The Roost in Dalston, London, a photographic studio and shooting location. Because it wasn’t a traditional wedding venue it meant their whole day was really chilled out and non-traditional, but also that they could completely plan it the way they wanted. “We’d had a really small and intimate wedding ceremony in Cornwall with just our immediate families so we wanted to throw a vintage wedding tea party for friends and relatives here in London”, began the bride.

“The Roost was an amazing find. It’s a former Victorian pub in deepest, darkest Dalston converted into a four floor photographic and film shoot location. My heart skipped a beat the first time we viewed it. It was perfect. I just loved the eclectic vintage vibe and ‘out there’ style of the place. From the gorgeous House Of Hackney wallpapers, to the giant props, old film posters and quirky paintings on the wall. We were just blown away.” 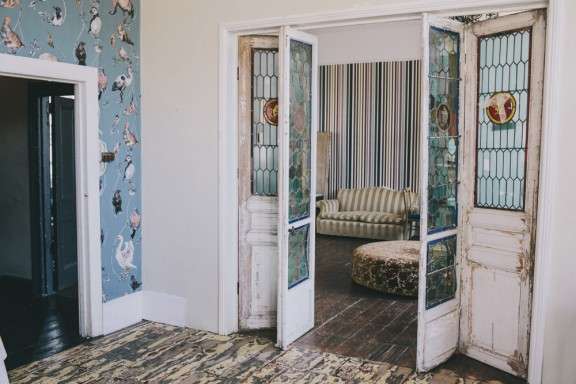 The majority of this wedding was DIY. The bride homemade all the cakes, bought flowers from Columbia Road Flower Market and designed and screen printed the invitations herself. “Well, it wouldn’t be a tea party without cake would it?” Cassandra laughed. “I do a bit of part time baking at Lily Vanilli’s East London bakery, and was determined to do all my own cakes – I’m always up for a challenge (although everyone thought I was mad). For the cake table I made a mixed berry vanilla sponge cake, devil’s good cake, cherry bakewells, moustache cookies, mini chocolate Guinness bundt cakes, marmalade loaf cakes, brownies, rocky road squares, scones and a cupcake tower with cupcakes bejeweled with pomegranate seeds and edible crystalised flowers.” 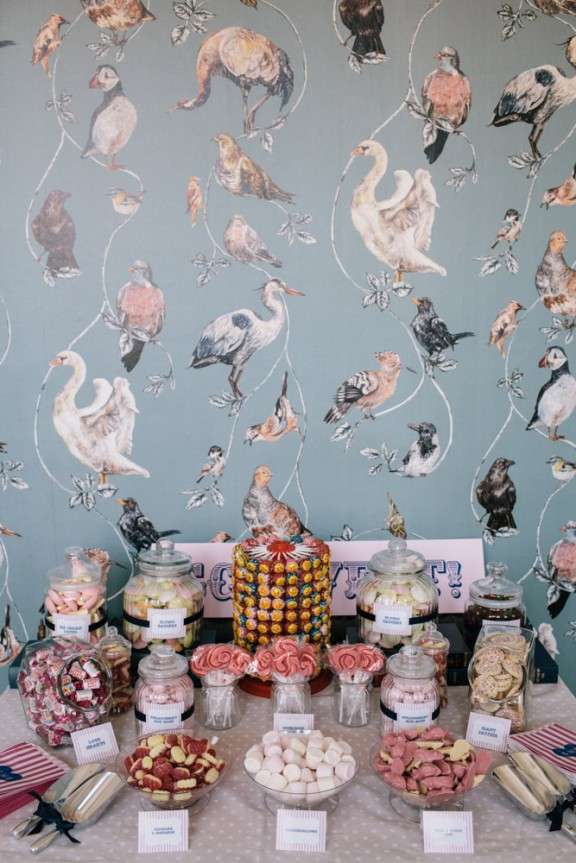 “We wanted to have loads of fun things for the kids (and adults) to do, so we had a biscuit decorating table where the kids could get creative decorating biscuits (baked by…yep, you’ve guessed it, me) with lots of sprinkles and coloured icing pens, etc. There was only one rule: you decorate it, you eat it. And of course, the ‘schweet’ table. A table full of old fashioned sweet shop penny sweets in (specially bought) glass jars. There were so many different sweets we included a disclaimer about us not being responsible for sugar crashes!” 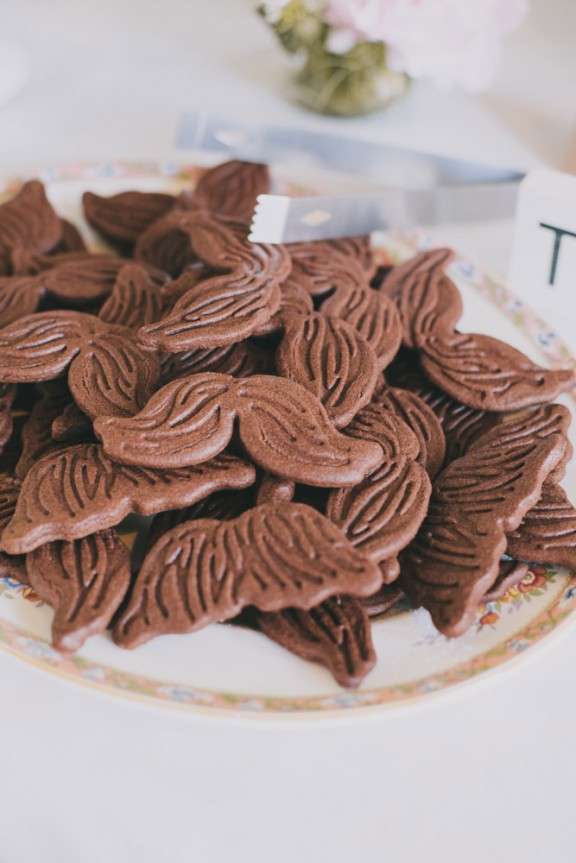 “The Roost was so unique it didn’t need much decorating so we just bought some flowers from Columbia Road Market that morning, which my friend arranged in old glass bottles and dotted them around the venue. Our invitations were designed and hand screen printed by me. The card was circle-shaped and designed to look like a commemorative vintage tea plate with floral gold gilding and a picture of us dressed up in 1920s outfits on the front.” 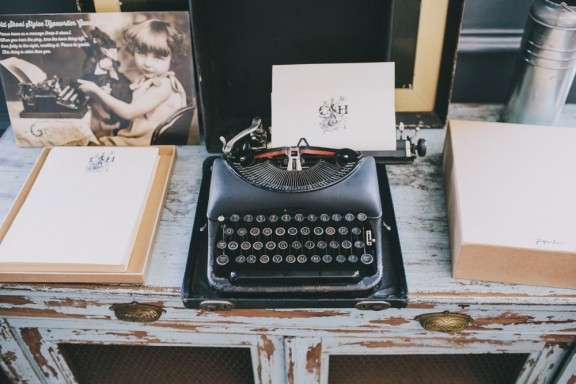 “On the day, we had a vintage Remington typewriter (a gift handed down from my parents) for guests to leave messages for us, as well as our very own special letter headed paper. We commissioned East London Illustrator Victoria Sin to create a personalised wedding logo consisting of our initials C&H and our favourite things, a skull, Gibson Les Paul guitar, pin up girl and a bleeding rose. Upstairs, we had a thumb print guest book poster where people could leave their thumb prints as balloons to create an image on the poster.” 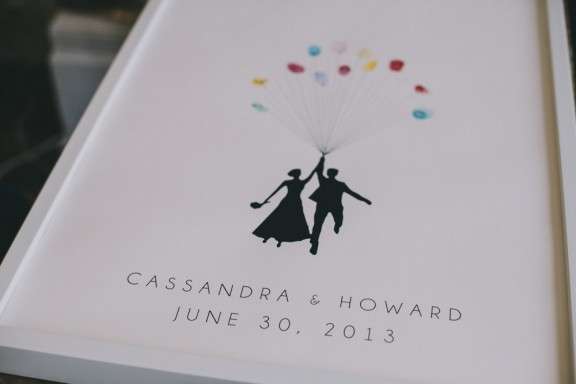 “I must say, the amazing, quirky, venue made it a truly unique day”, she concluded. “Every room had it’s own distinctive charm. Which in a way is a bit like us; we’re quite different but good together. We tried to save wherever possible by doing stuff like the baking and making props and stuff ourselves. Although I would advise anyone thinking about baking for 120 people by themselves at home to consider it very carefully first (it nearly killed me!)” 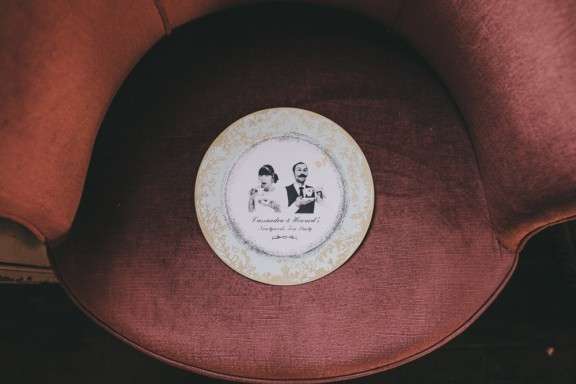 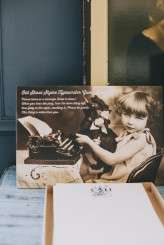 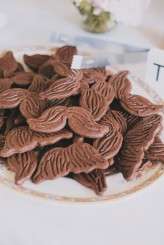 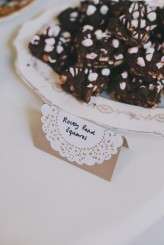 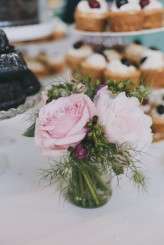 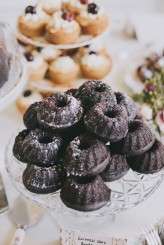 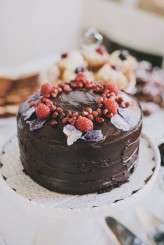 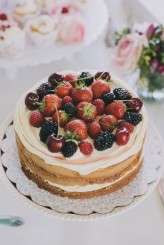 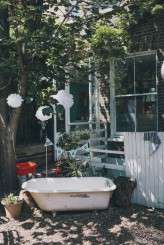 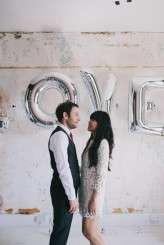 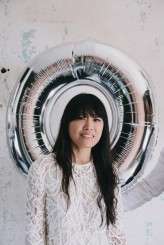 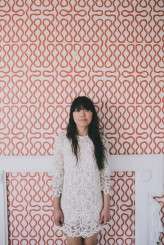 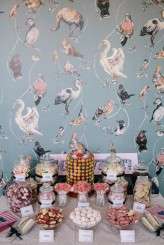 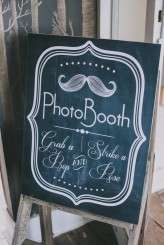 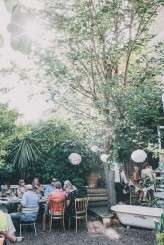