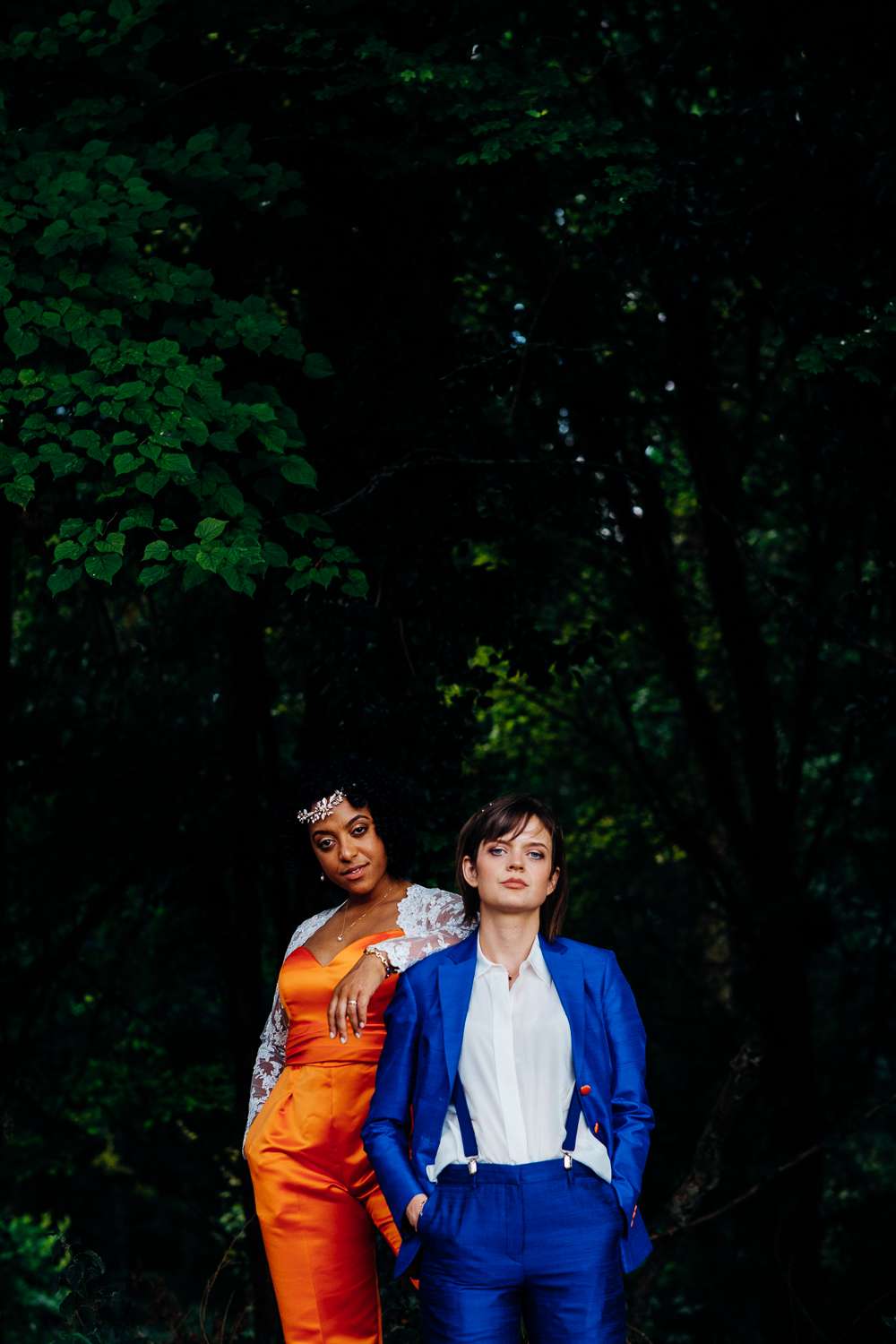 OK, prepare your minds, bodies and souls for the stunning wedding that’s about to grace your screens – this is not a drill! Anna and Steph’s beautiful barn wedding had a focus on “Good food, good music and fun” with a colour scheme to celebrate Pride. It was natural, un-fussy, and totally, breathtakingly beautiful.

The ceremony started with Anna and Steph dancing down the aisle together hand-in-hand, each in incredible wedding outfits influenced by powerful women. “As two women we decided not to go down the traditional ‘one dress, one suit’ route,” they explained. “Anna, inspired by Janelle Monáe’s style, wore an iTailor blue suit with braces. Steph, inspired by Beyoncé, wore a Tina Waller jumpsuit in her favourite colour, orange (with a touch of lace). For both of us, pockets were an important feature! Seeing each other for the first time in our outfits was a standout moment for us both.” 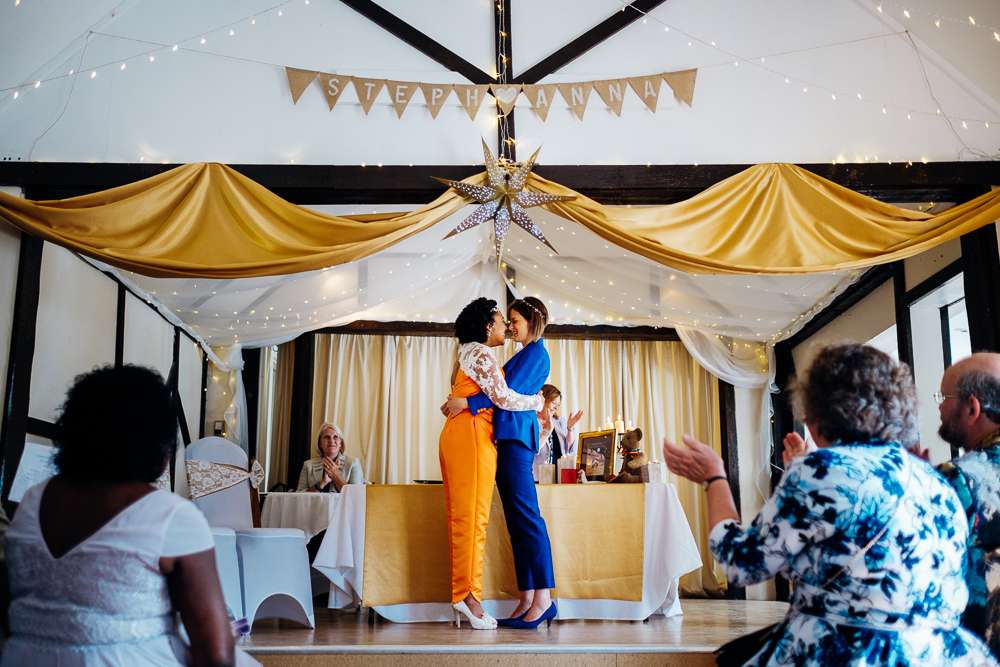 Their ceremony was held in the barn at Bellows Mill, Bedfordshire. “We chose the venue because they allowed us to get creative and personalise the space,” they continued. “Due to our outfits being less bridal than is traditional; and the day in general being less ‘weddingy,’ we wanted to be a bit more traditional/bridal in the barn decoration so we went for cream and golds. Anna’s parents decorated the barn beautifully with gold and cream drapes, fairy lights, and art work from the local wickerman!” Their family and friends, representing three generations, delivered beautiful and meaningful readings, and Anna and Steph read poems instead of doing traditional vows. 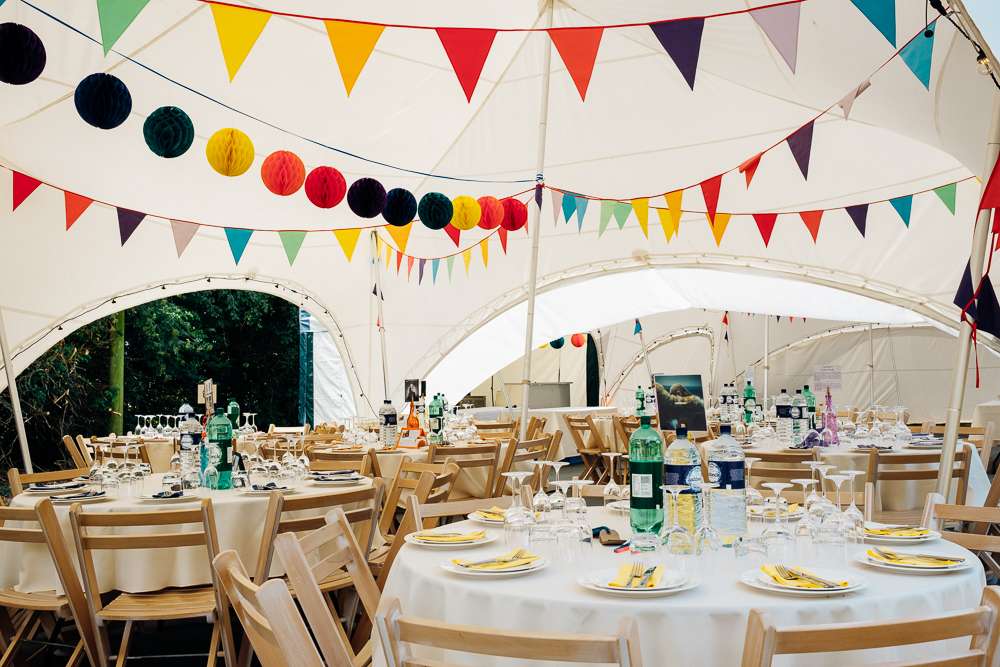 After the ceremony, Anna, Steph and guests moved to the lakeside for a champagne reception. The mood was super chill, with their family and friends jamming with percussion and brass instruments and playing lawn games. Their meal was held in a marquee decorated in Pride colours, bunting and pom poms. “The vibrancy reflected the festival feel which we aimed to bring to the day. As such, we did not have a seating plan but we named each table after iconic albums that were meaningful to our relationship, and invited guests to choose the table that best represented their personalities.” (I love these – the descriptions they’ve given are sensational!) 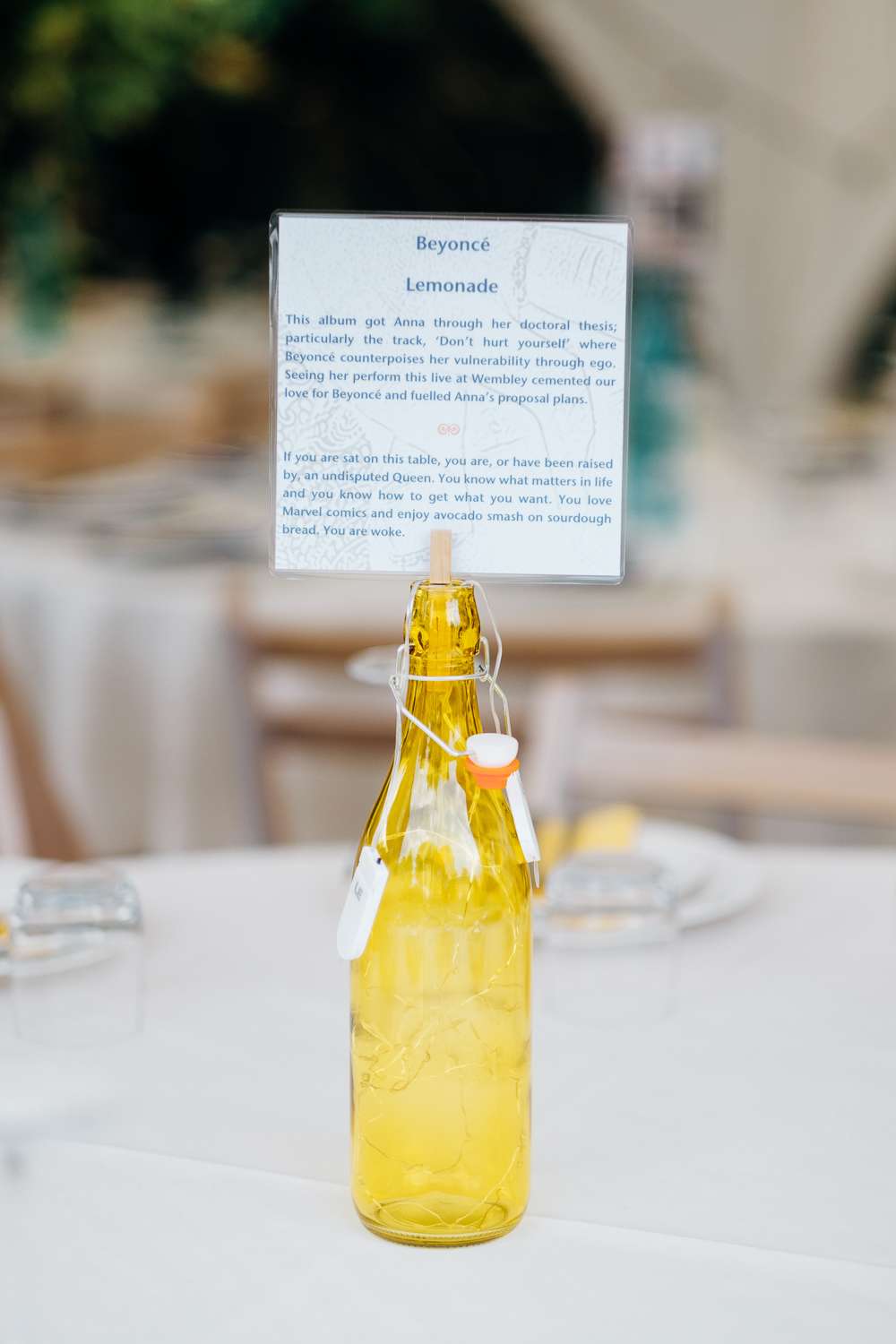 And it wasn’t just any meal – it was a feast from Trini Caribbean Catering. “Having Trinidadian food was really important to us because we are both big foodies!” they say. “Steph’s mum is Trinidadian and we had some very special Trinidadian guests attending so it was important to have a ‘Trini’ element. Also, Anna is vegetarian and in her experience, the veggie option at weddings is traditionally nothing special – with Trini food we knew we would get that extra flavour.” 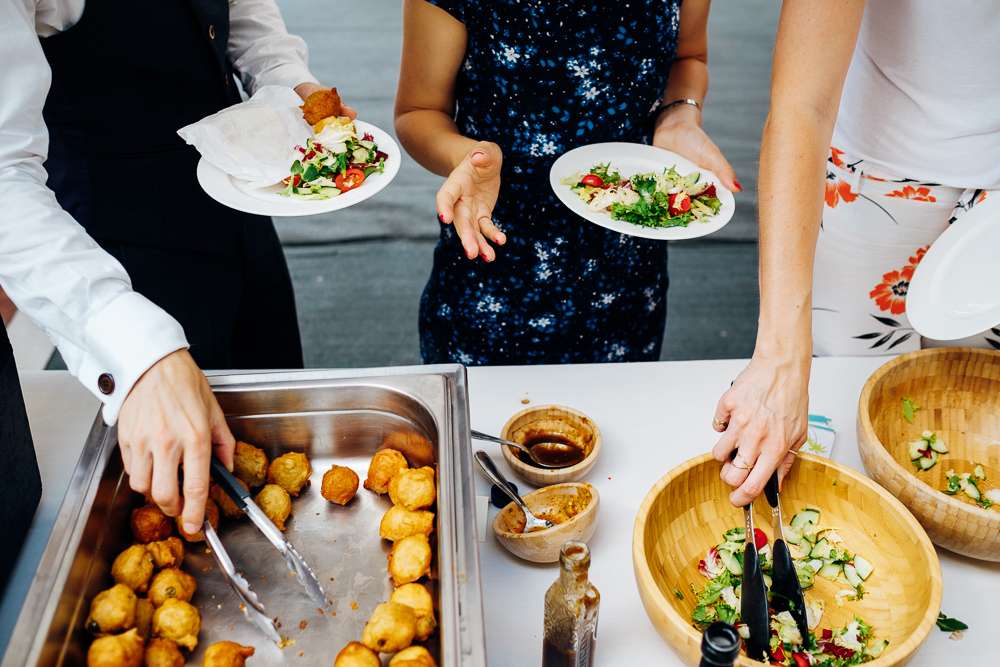 After emotional speeches and vegan puddings by the lakeside, their 7-piece-band The Hot Keys played their first dance, Noisettes’ Ragtop Car. Over the evening they also played loads of incredible renditions including Proud Mary, to which Anna and Steph had even prepared a choreographed routine. There were also loads of impromptu entertainment moments, like one of the children asking the band if she could sing a song and promptly getting on stage to belt it out. 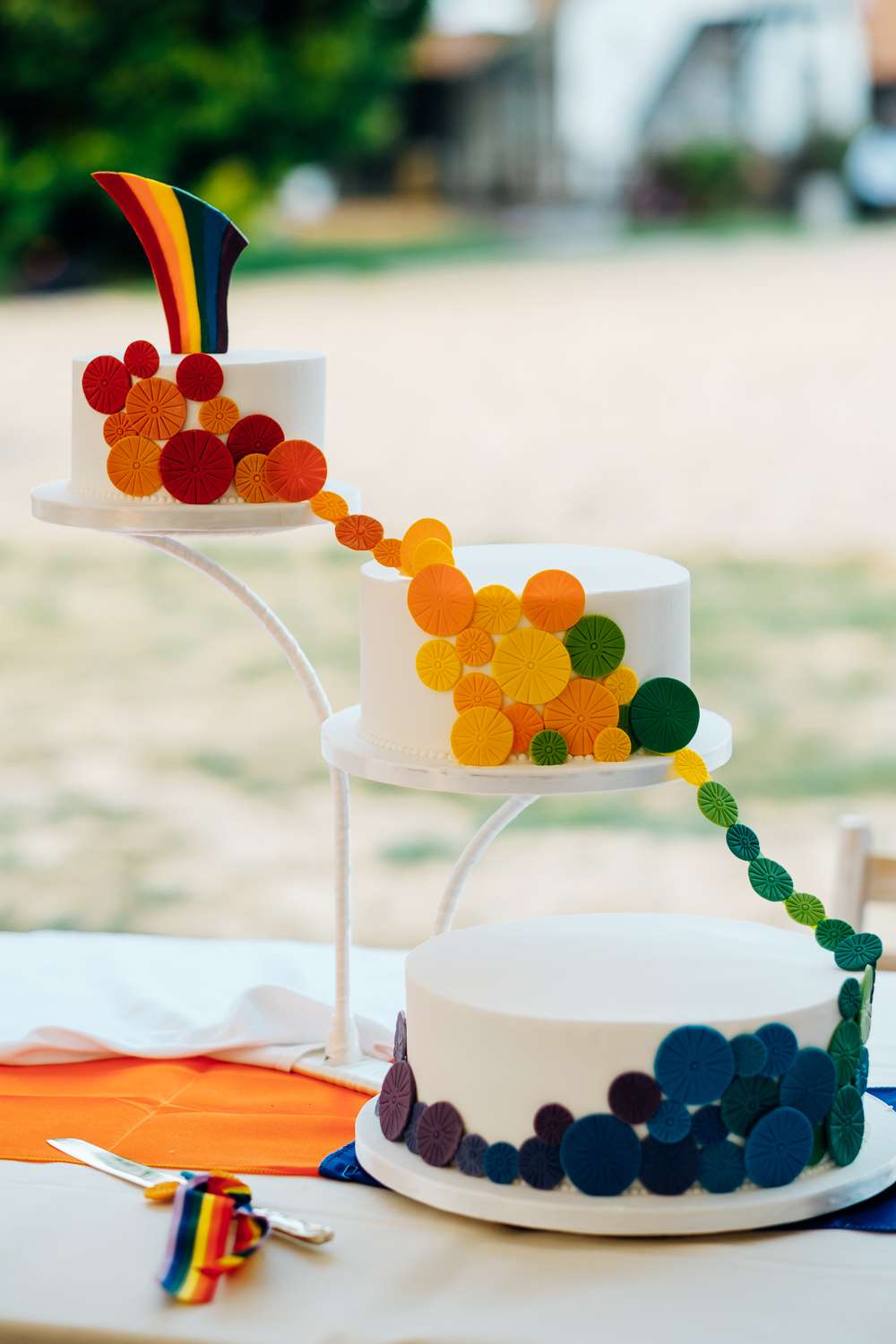 Anna and Steph had also curated a playlist over their two year engagement for in between the sets and once the band had finished. “Over the two years of our engagement we just kept thinking of songs to add to the different playlists. In the end the three lists lasted about two days altogether! We even had a house party a few months before the wedding to practice the playlists and work out which songs worked best.” 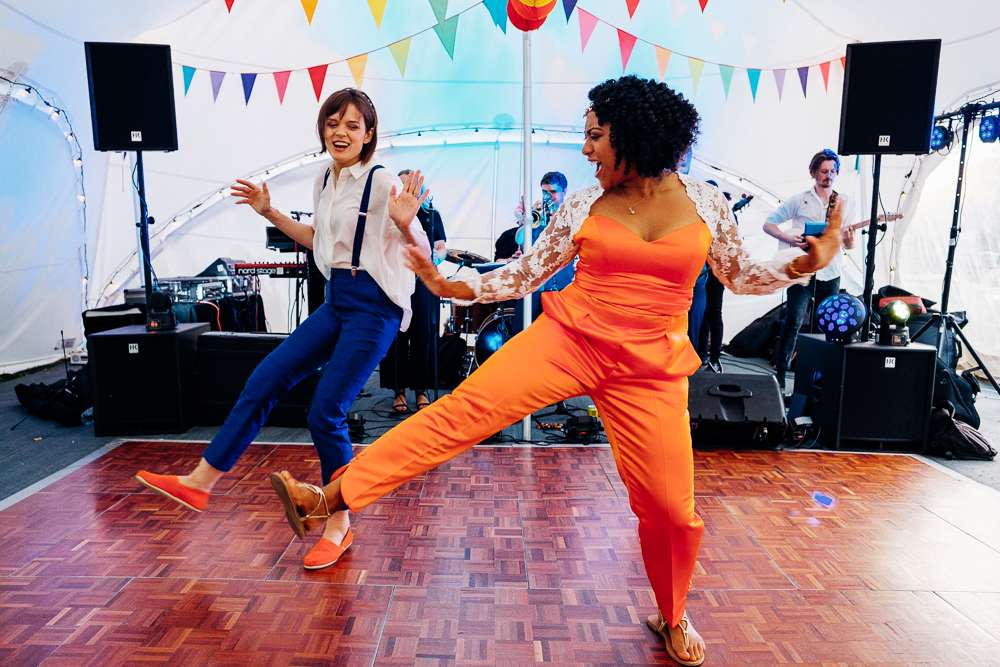 Now that, my friends, is genius. Anna and Steph also have this genius pearl of wisdom. “One brilliant piece of advice which Anna’s dad gave us was to go out for dinner a week before the wedding and just talk together about what we wanted marriage to be like for us. It was so refreshing to shift away from wedding planning and actually think about the point of it all – marriage.” 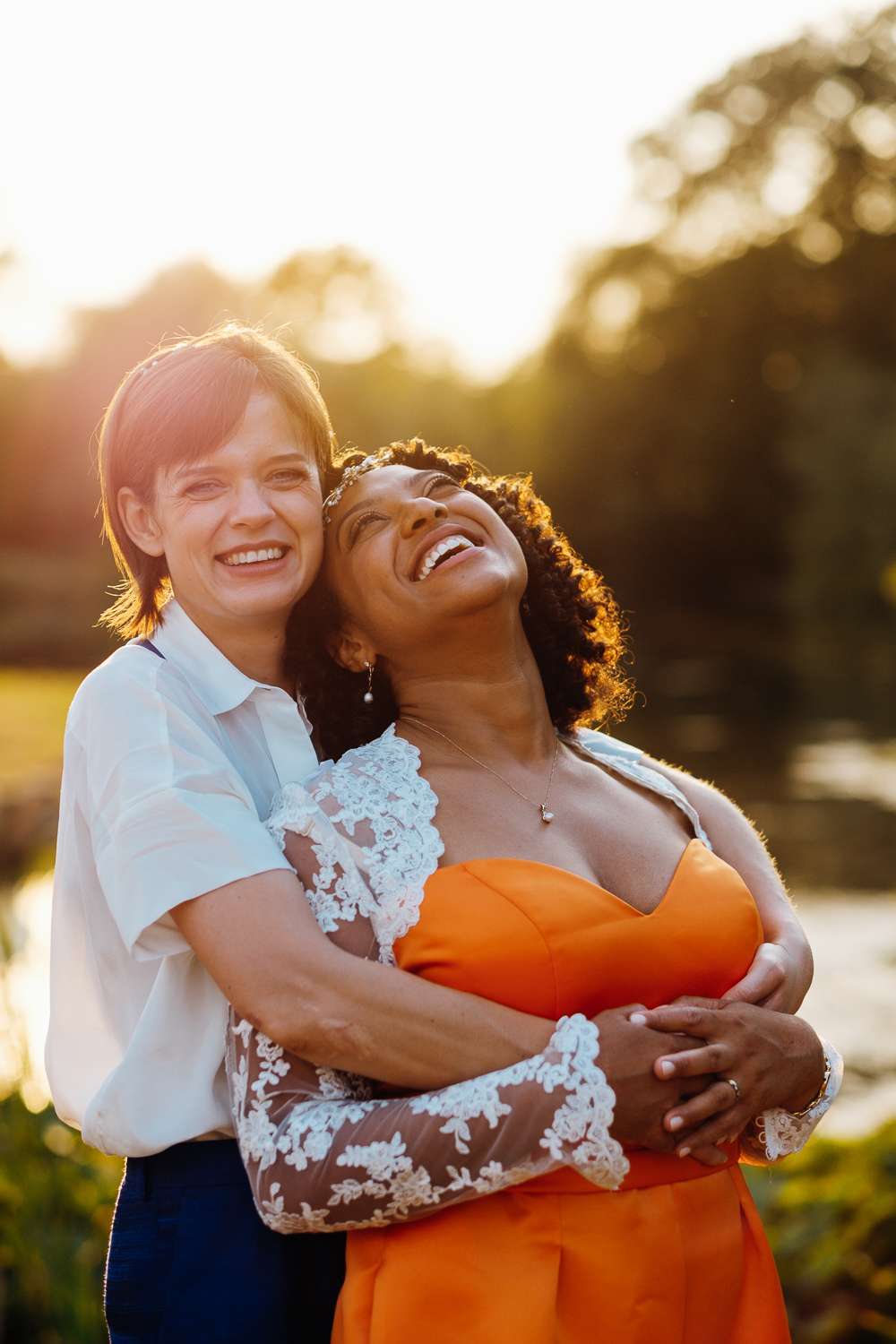 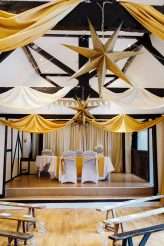 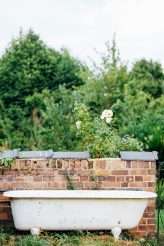 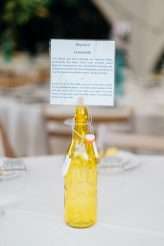 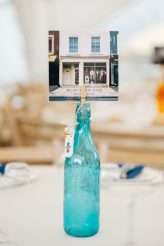 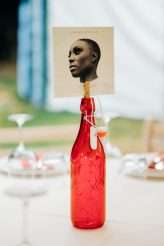 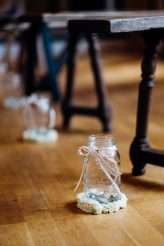 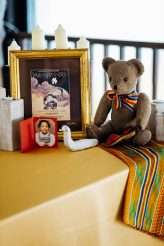 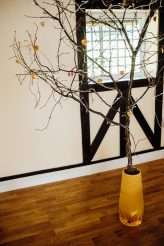 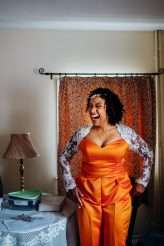 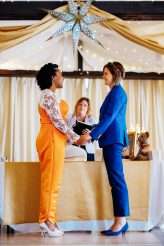 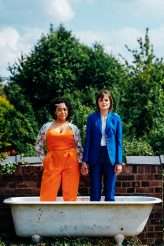 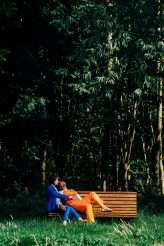 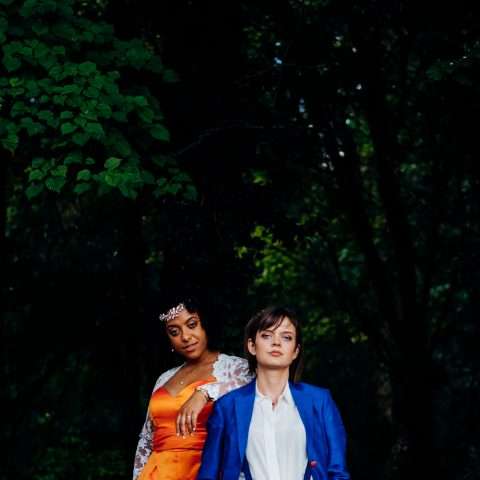 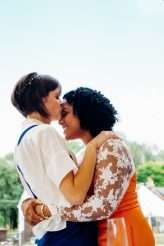 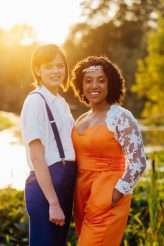 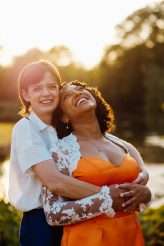 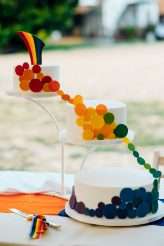 Emma and Roxy's relaxed city chic wedding day is a totally beautiful celebration of love. It's so easy to get caught up in the aesthetics of weddings or the little details, but at the base of it all, it should be about a gorgeous love story. This magical North London pub wedding totally does this (although it nails the aesthetic details too!)

Fiona and Allana wanted their summer 2019 wedding to reflect their personalities and their love story. They met at primary school (although were in different years so they didn't really know each other) and reconnected when they both started working at the same place. Although neither of them were out at the time, they instantly clicked, knowing what they were feeling for each other was more than just friendship.

Rea and Rhi's colourful woodland wedding is not only beautiful to look at, it's a totally feelgood day too. Their inspiration for the day was about community, with everyone coming together to support them and celebrate their connection. There's a beautiful communal spirit that oozes out of these photos. And with a colour scheme that extended to 'hot pink, yolk yellow, orange, salmon and purple', it was also all things bright and beautiful!

Becs and Megs' simple wedding started with a ceremony at Manchester register office followed by a restaurant reception at No 1 Canal Street. Armed with a budget of £3500 they only included things they cared about, wore outfits from Karen Millen and kept the extra decorations minimal. The flowers were limited to their bouquets and the flowers in their hair