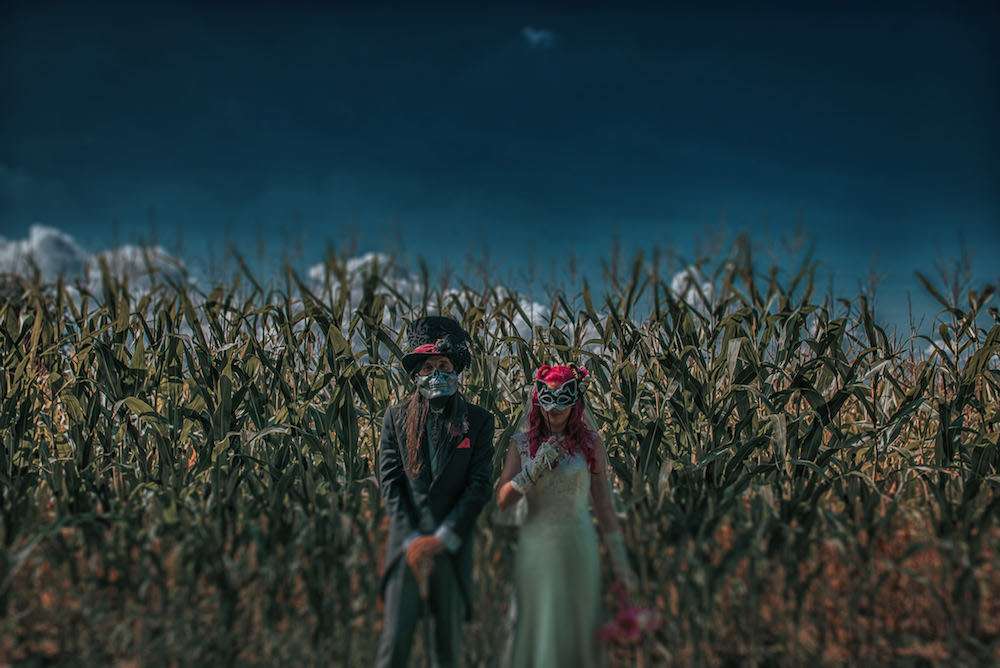 Rhian and Andrew’s wedding theme was ‘Rock n Roll cats’ with the slogan ‘mutual weirdness forever’ and to be honest, that – coupled with the above photo – is pretty much all you need to know to want to find out more…

“We wanted to encapsulate us into our day as much as possible,” Rhian explains, “so we ended up with a lot of different elements – from cats, metal and rock, to leopard print, pink, Pokémon, skulls, and everything in between. We wanted to focus on what we both love in life and what was special between us – but we were also inspired by a lot of different weddings we viewed on your blog!” (You GUYS.) 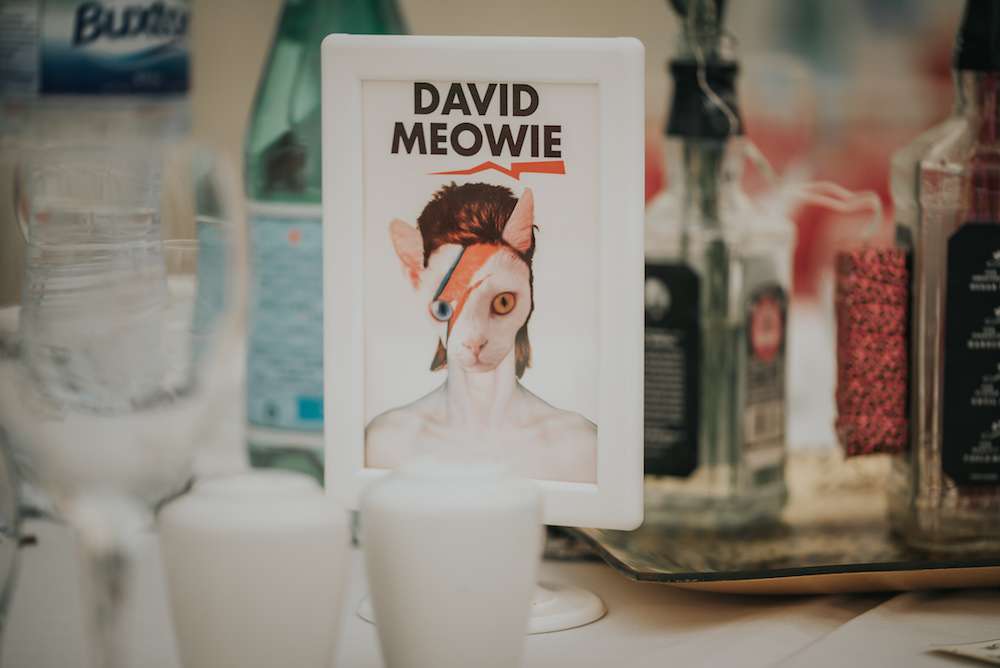 Rhian is a designer and illustrator so created most of the elements herself, alongside friends. “Nearly everything was completely bespoke, designed, or made by us!” she says. This included table names based on band name-cat hybrids and top table signage saying ‘Hiss and Purrs’ instead of his and hers, as well as hand-painted signs and hand decorated jars filled with hot pink decor. 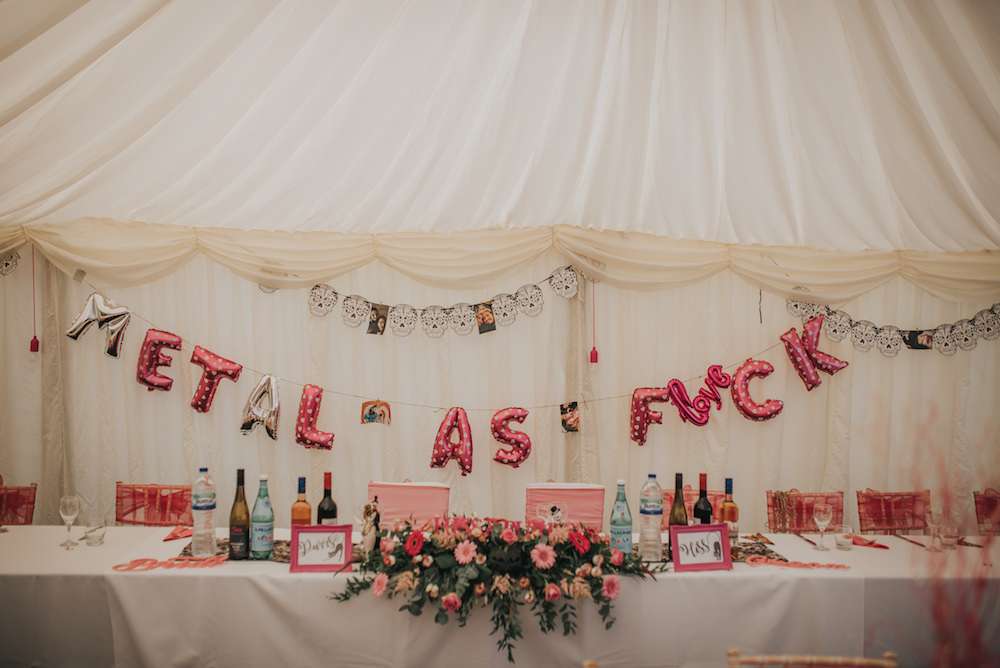 Their ceremony was at Saffron Walden Town Hall, which they decorated with a balloon arch. “I walked down the aisle to Fleetwood Mac, The Chain,” Rhian continues. “I was so nervous, all our guests couldn’t stop laughing at my jelly legs and hands! Andrew and I are both huge Pokémon lovers, so I chose to rewrite the Pokémon theme tune for my vows to Andrew. I ended on opening a Pokéball and proclaiming ‘I choose you’ Which I think went down tremendously…” 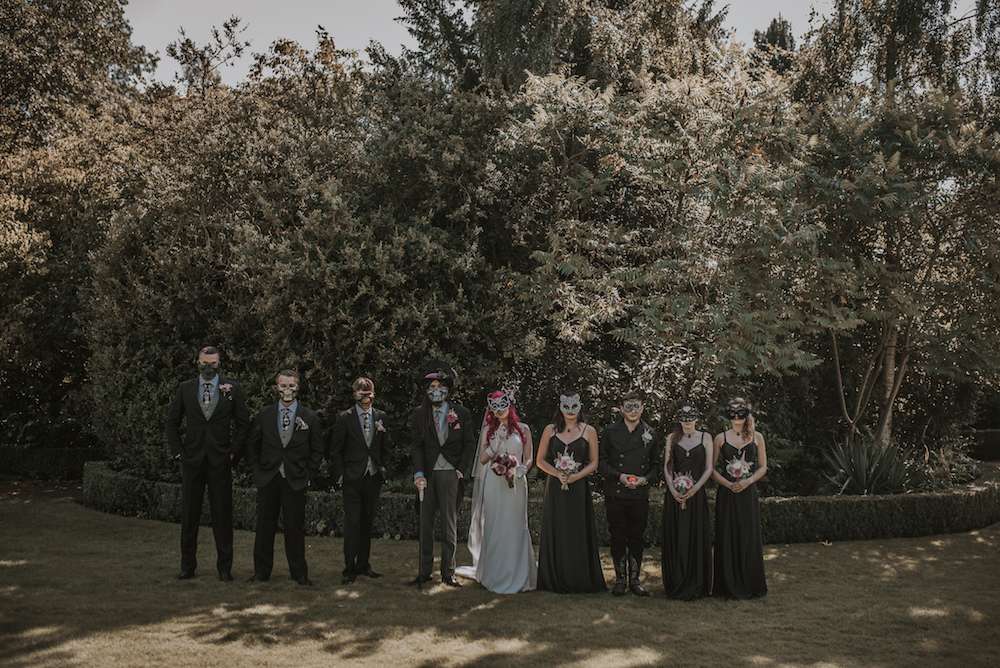 “Following our ceremony, myself and my bridesmaids put on cat masks and the groomsman, skull masks. We then proceeded to walk out of the town hall and through the centre of Saffron Walden town though the very popular Saturday market – as you can imagine this drew a lot of amusing attention!” 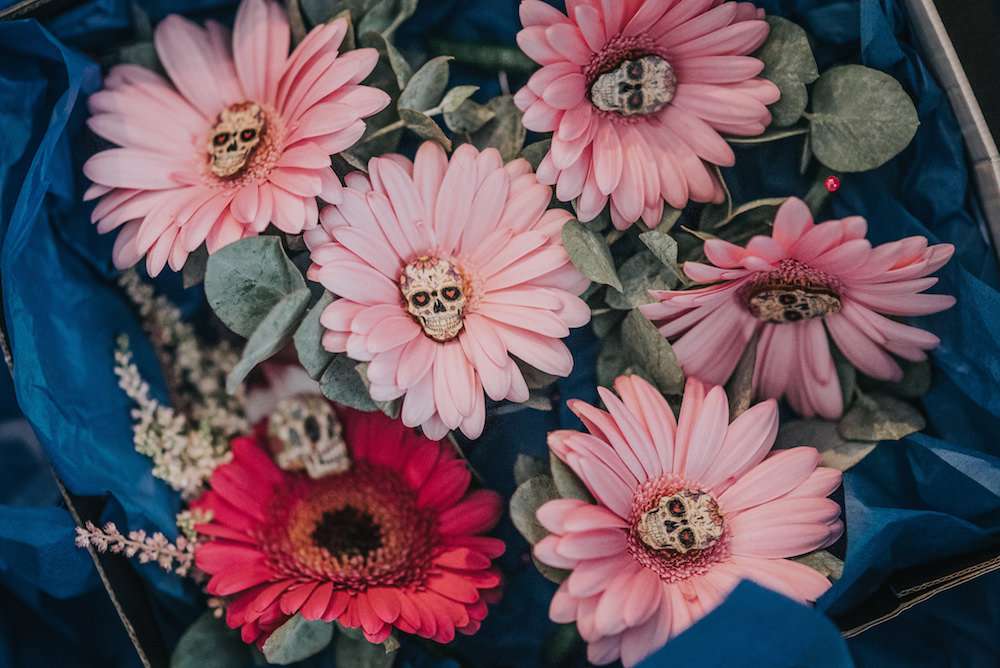 Rhian wore a Ronald Joyce dress from Fleur de Lys Bridal with a bespoke fascinator in her bright pink hair by Ooh La La Boudoir (who also made her a mini top hat for the evening do, and made Andrew’s top hat), jewellery from Rogue and Wolf. Her bridesmaids wore dresses from Iron Fist Clothing – her bridesman wore a waistcoat from Spiral Direct – and they all wore cat ears from Lulu in the Sky. 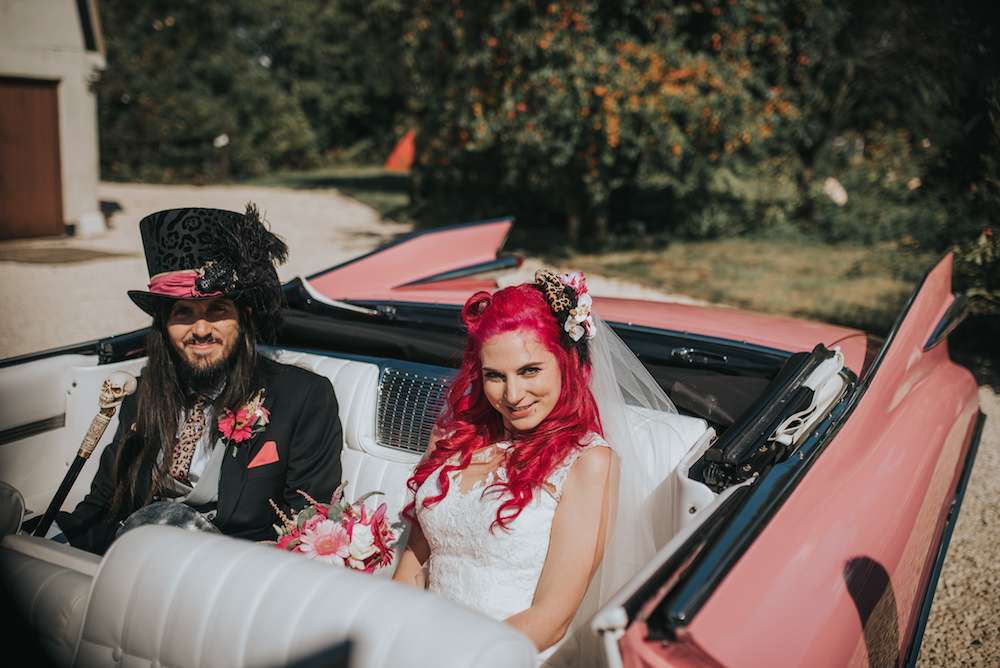 In a pink Cadillac, they made their way to their reception, held in a marquee in a private field where people could also pitch tents to stay afterwards. Rhian had worked her magic on this too, as well as hiring a couple of neon signs from Neon Circus. In front of a banner saying ‘metal as fuck’, they had speeches, and enjoyed their first meal as a married couple, as well as cut their incredible Carisses Cake with a tiger print knife (very on brand). Their cake had everything – pokéballs, leopard print, ‘mutual weirdness forever’ and skulls to match those in the centre of the flowers in the bouquets. 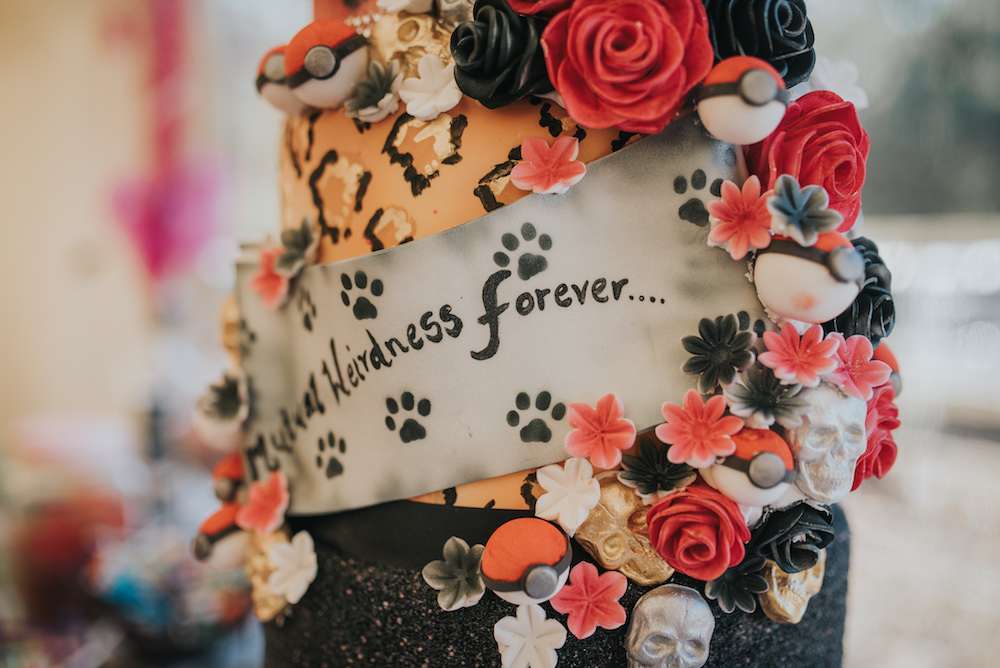 As music is such a big part of their life, Rhian and Andrew wanted to ensure they’d catered for everyone .”From a music perspective we covered all bases from metal, rock, punk through to 80s, 90s and ending the night on drum & bass and hard trance!” They also had a magician and a face painter, resulting in some cute leopard print face art on Rhian! 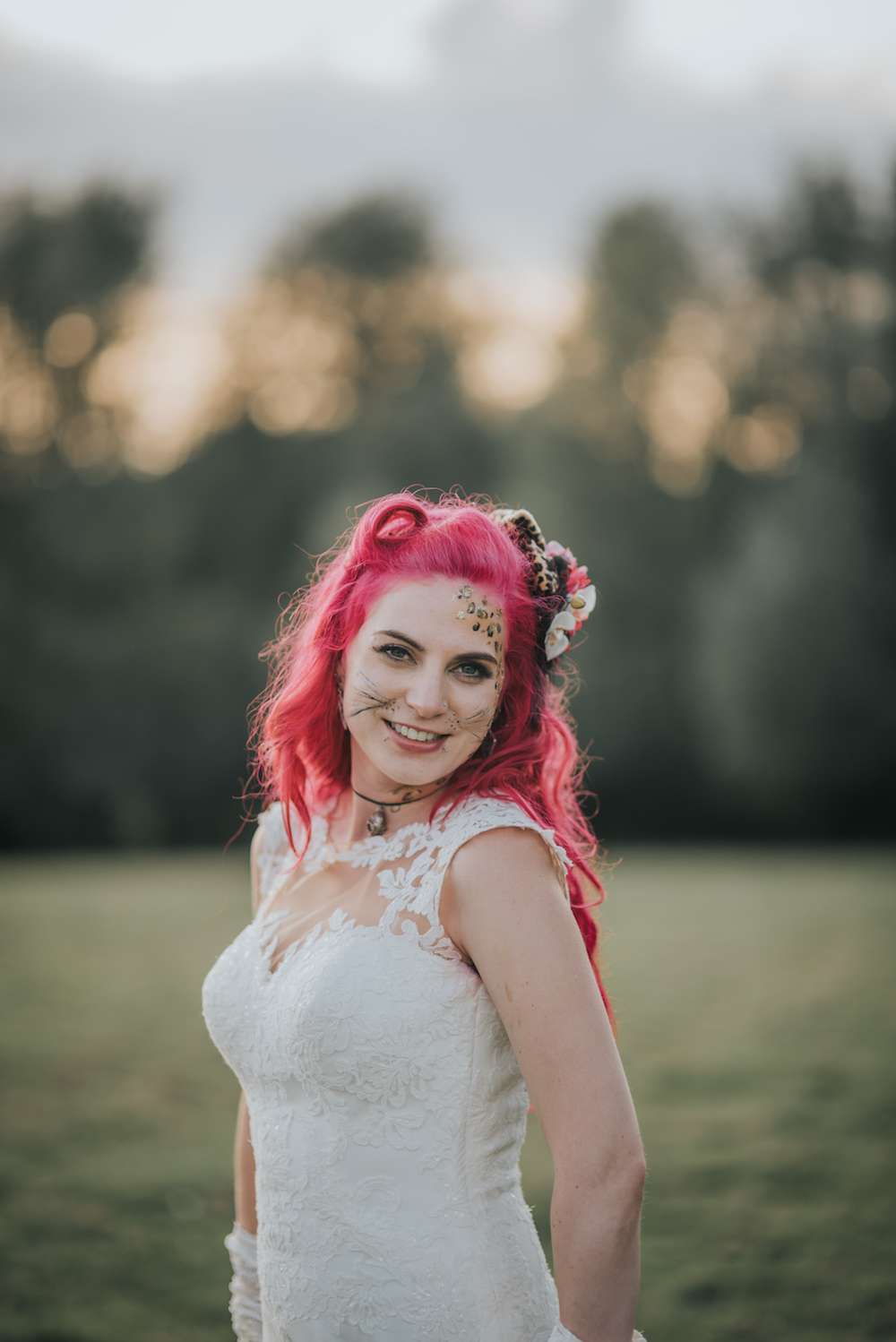 When asked for advice for future couples planning their own Rock n Roll wedding, Rhian says: “Take your time planning and researching. If you want to save money hit up lots of car boot fairs, design and make things yourself, or enlist your creative buddies!”

Andrew & Rhian's Metal Wedding was a day like no other! 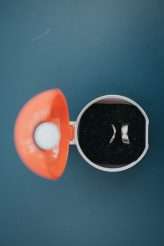 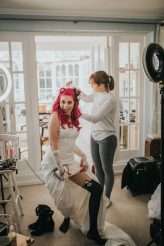 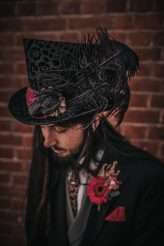 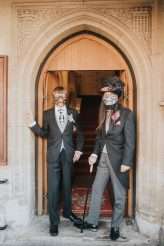 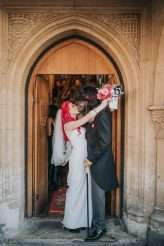 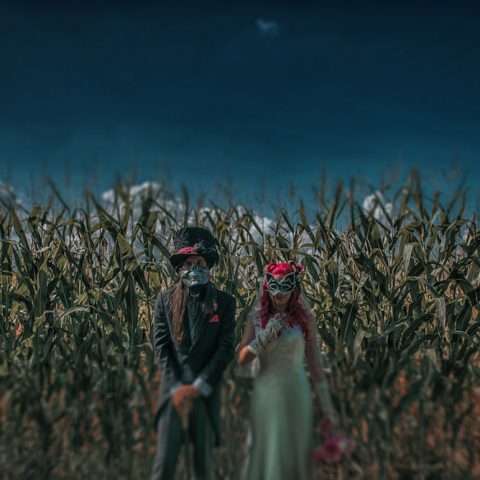 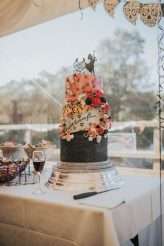 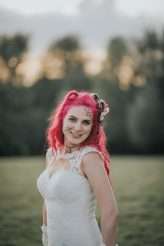 "I got married in August", said pink haired Blogcademy attendee Charlotte after the workshop was over. "Your blog was a huge help so thank you." "Amazing, I responded - make sure you send me your photographs!" And she did, and oh boy am I glad. What a wedding! "Our wedding theme was decided on a drunken weekend in Palm Springs in May when we were on a work trip", Charlotte told me. "We ordered 50 pink plastic lawn flamingos to be delivered to the Ace Hotel… then panicked when they arrived and we had to buy four huge holdalls to take them back on the plane! I was convinced customs would think we were smuggling drugs and cut them all open but they really made our wedding!"