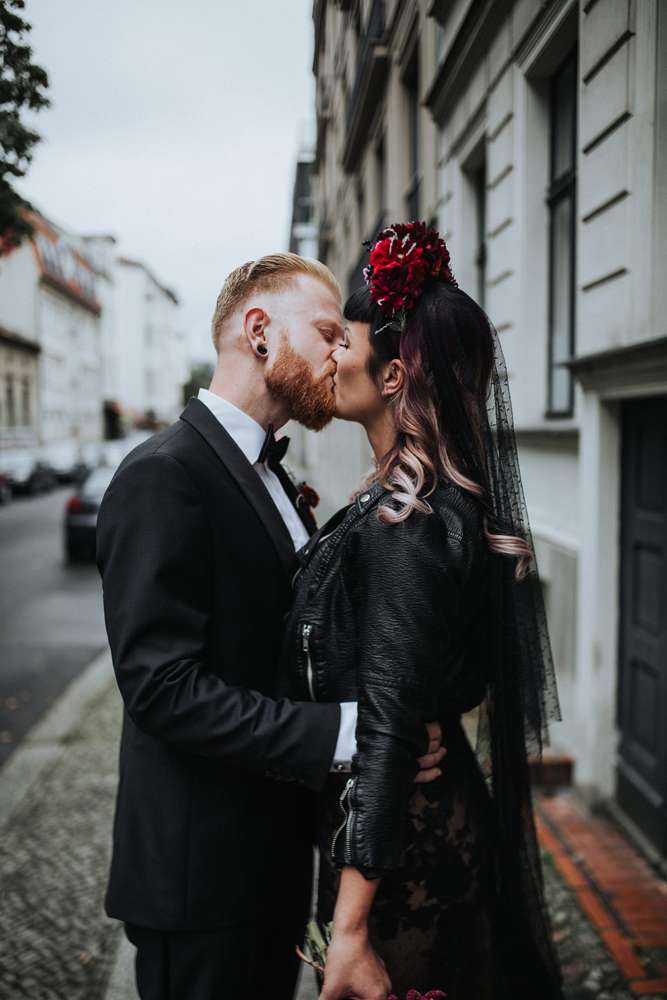 Daniela and Thomas’s wedding day was a mixture of Rock n Roll, psychobilly and Dia De Los Muertos, which the bride describes as a “Happy, loud and without any conventions” kind of day. They had ‘first look’ photos taken and also stopped in at an Oreo pop-up store on their way to the ceremony, which was held in an old circus tent! Their reception party was in a rockabilly club in the middle of Berlin where they had a live band playing so it was like a gig – they first met at a psychobilly concert in the bride’s hometown of Munich, so this was a lovely nod to that. 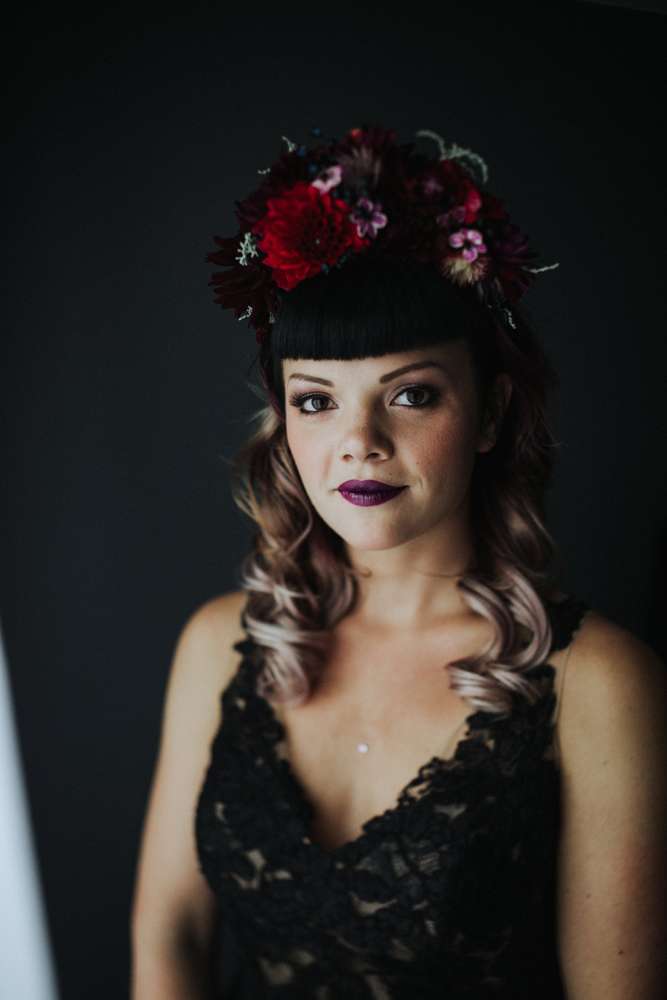 Daniela said they were inspired by, “The Latino feeling and understanding of life and happiness. Colourful but Rock n Roll. Our wedding planner, Svenja of Freakin‘ Fine Weddings, and I came up with Dia De Los Muerto for our main theme.” 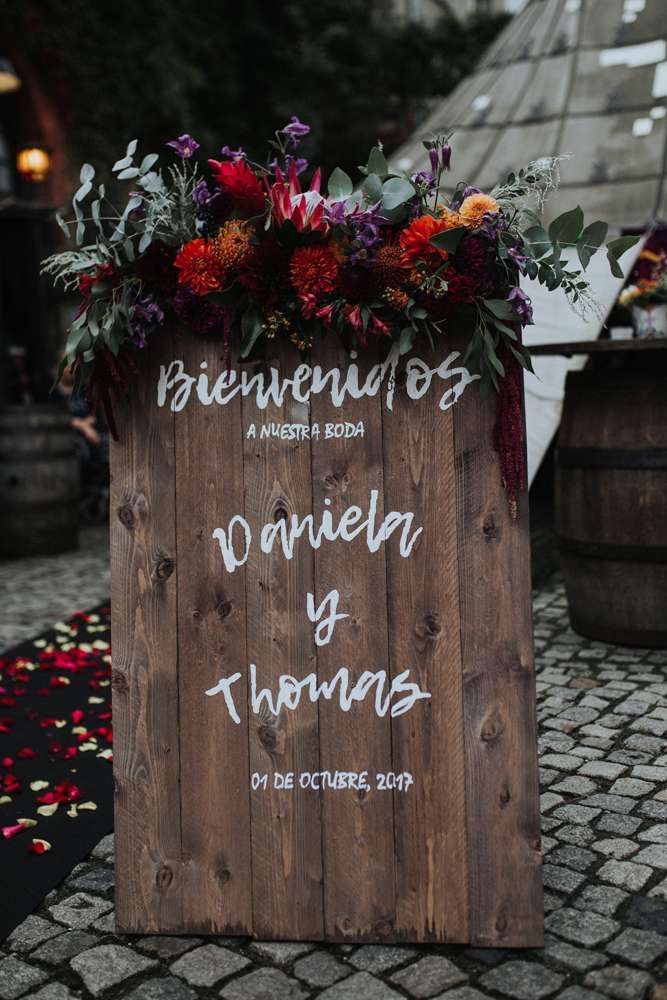 Svenja also officiated the ceremony as she and Daniela have been friends for years. “We really wanted it to be unique, and that’s why we chose the inclusion of the Bavaria and the Thüringer sausages to symbolise our new bonding.”

The bride’s beautiful black gown was by Pronovias and, along with her flower crown, she totally smashed the Dia De Los Muerto vibe! 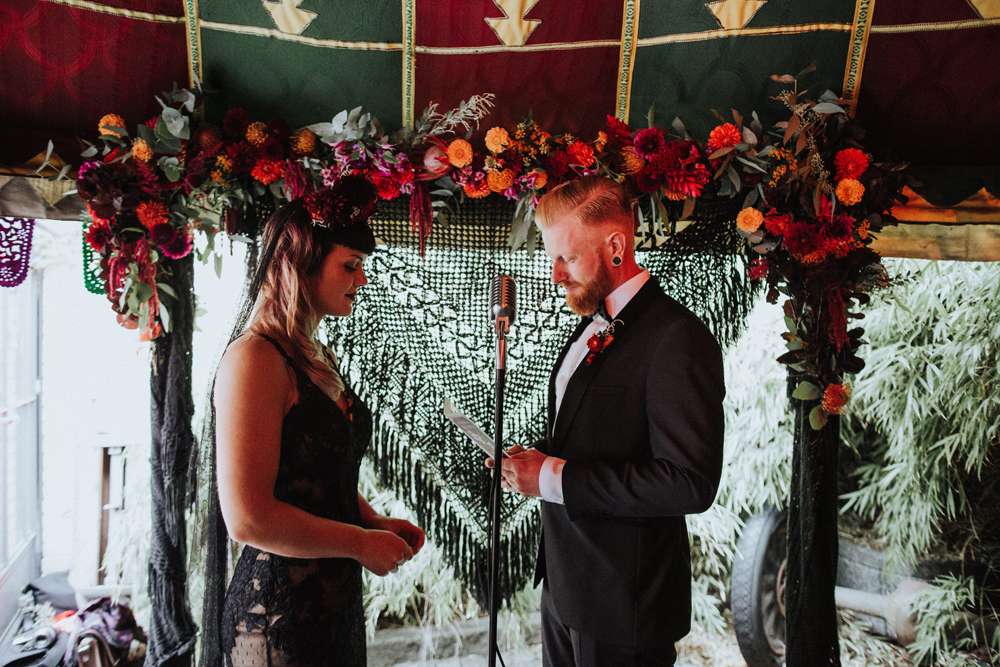 The couple kept things casual and and the atmosphere relaxed at their reception. “We didn’t have a seating plan because we wanted everybody to feel free and easy in the evening, so we simply had a barbecue. And we started pretty early with the band, Boppin’ B – it was more of a concert feeling. We also had a burlesque show via Heroine Artists, which is not something we’ve seen before!” Other entertainment for their guests were a skull golf photo booth, and DJ Trust The Girl. 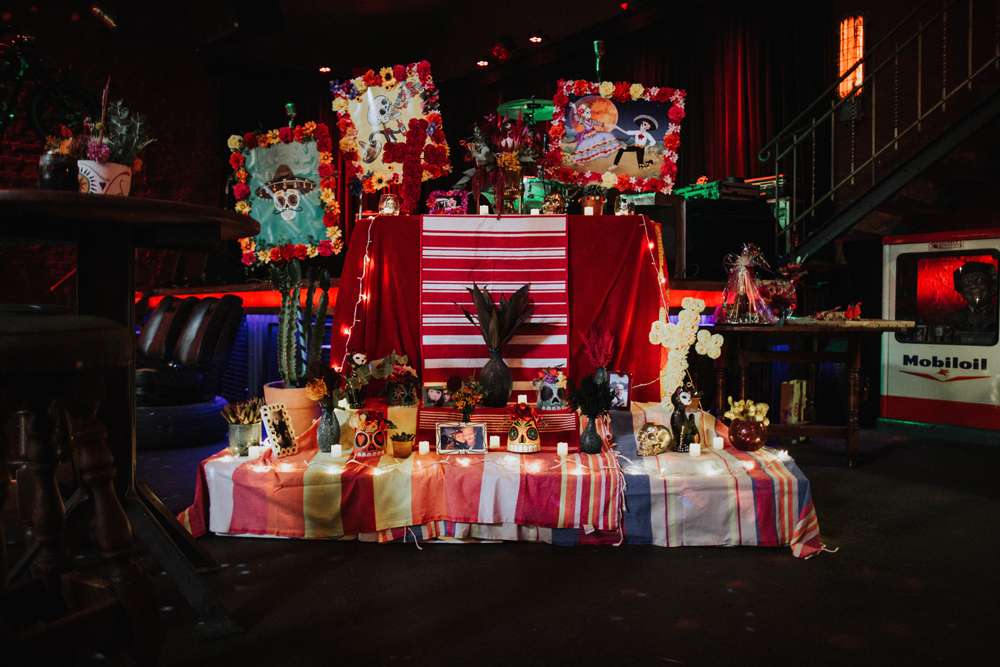 With the meal being a BBQ, it meant that they didn’t have to use tables, which really saved them money. As did the fact that the location already was a Rock n Roll one, so decorating it in keeping with their theme wasn’t too much of a stretch. This left more money in the budget to go towards the biggest expenses of food, drinks and the band. The props and décor included handmade skulls that were just shy of two metres tall. There was also an altar full of Mexican decoration and pictures of the couple. 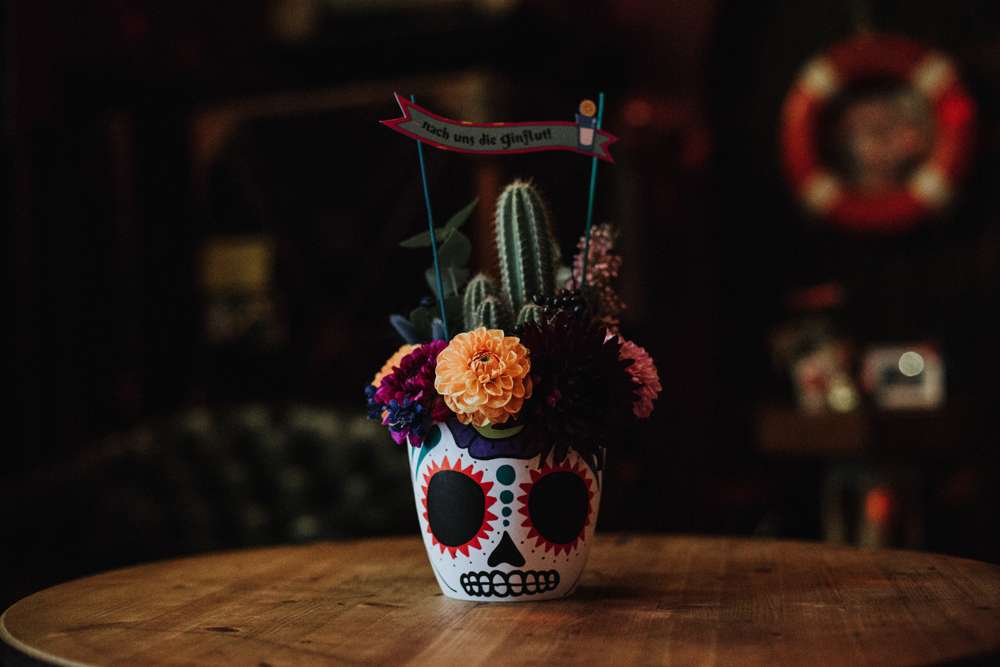 The flowers, by Kopflegenden, were exceptional, with the drama of the floral arch, the delicate and romantic petals scattered on a rug, and the autumnal jewel colours of the bouquet. Everything really pops next to the black of the couple’s outfits and the macrame hanging feature on the arch. The cake, by Patisserie Sarina, was a triumph! They created a sugar skull cake wearing a flower crown that bled jam. Talk about nailing the brief! 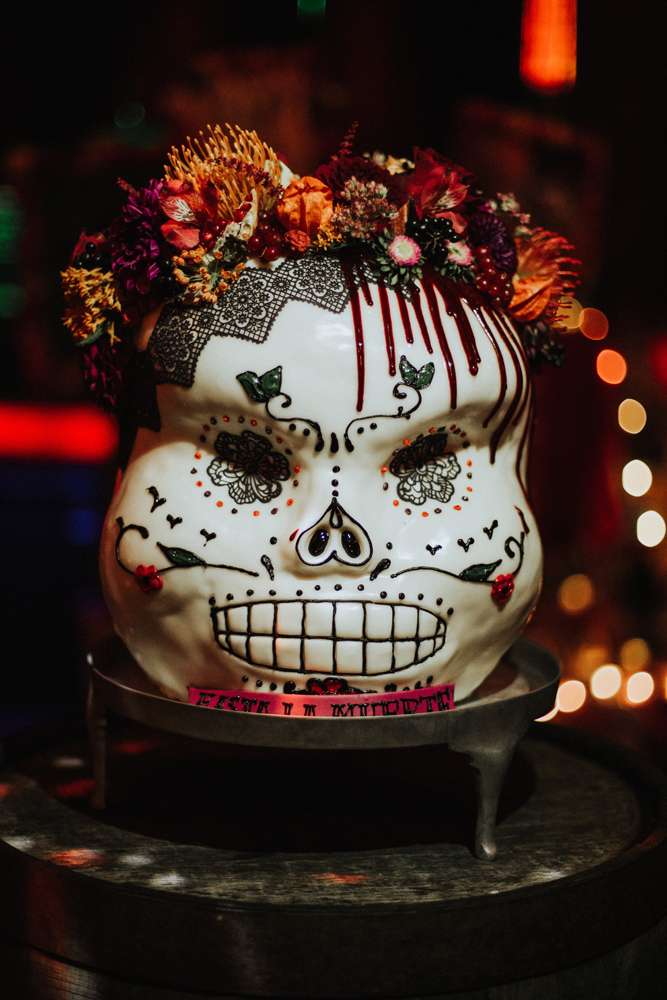 The best thing about planning their wedding, said Daniela, was “Svenja! She was our angel!” And her favourite part of the day was the ceremony and the band.

Their advice is that you “Plan your wedding, not what other people expect yours to be! Everyone’s still psyched and tells us how different and great our wedding was – so we did everything right by doing it in the way we felt most comfortable with. Invite just the people you love – the ones you want to be around – don’t hesitate not to invite people who don’t support you.” 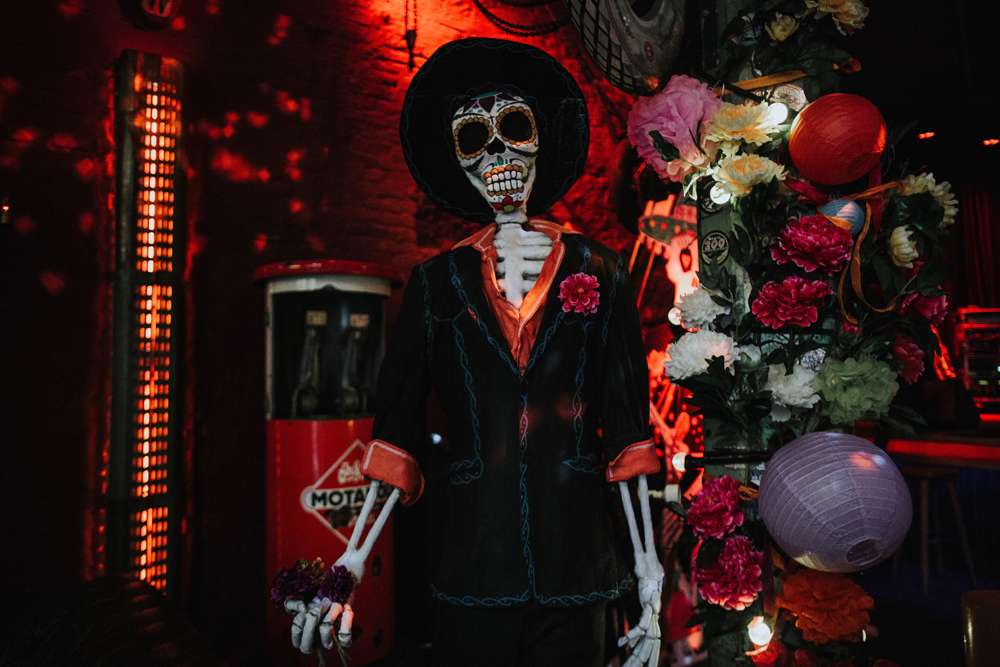 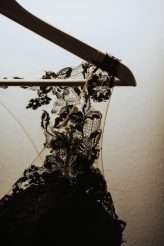 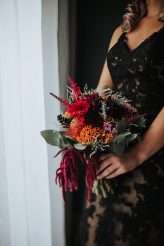 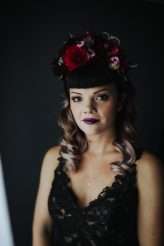 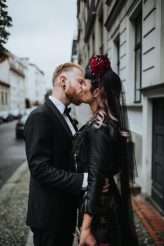 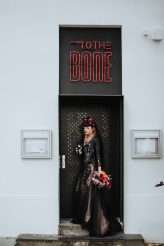 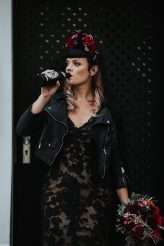 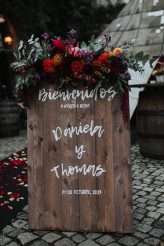 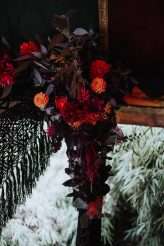 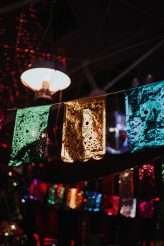 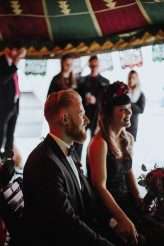 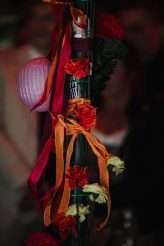 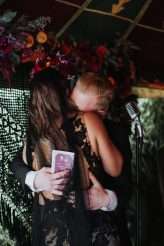 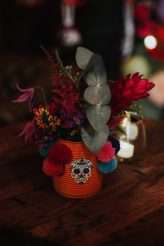 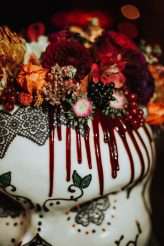 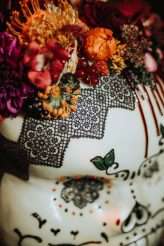 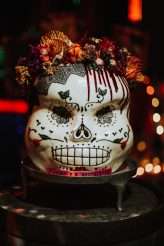 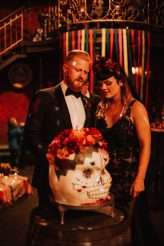 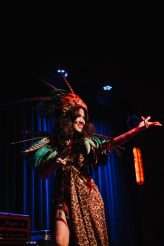 I love a daring bridal look and so when I saw Karyn & Fernando's wedding I was immediately drawn to one thing - Karyn's amazing headpiece. Go big or go home I say! Being a milliner, the bride designed and made it herself. She also designed her own wedding dress alongside Toronto-based dress designer Thein Le. This was all very significant as it was actually Karyn's hat business that first brought the couple together.

Day of the Dead Wedding on Halloween

Although they got married on Halloween, Charlie and Chris decided they wanted their wedding to have a different feel to most themed Halloween weddings. With the groom's father being from South America, a Day of the Dead theme made way more sense. "Chris’ dad is South American and he’s always loved day of the dead", explained the bride. "We both absolutely love autumn with all its vibrant copper tones and Halloween is our favourite holiday. We always celebrate it in a big way so it was an obvious choice for our wedding. We also wanted the whole thing to reflect my heritage too so the Asian influence throughout our venue, The Matara Centre, was really important."

The Black Wedding: A Metallica-Inspired Celebration

Matt and Kirsty used Metallica's The Black Album, and their wider shared love of alternative music, as a rough inspiration for their May wedding day.