One of the questions I’m asked the most often is “How did you start Rock n Roll Bride?” There’s a short version that I reel off without a second thought, but after reading this post by my friends at Bespoke Bride I was inspired to put digital pen to digital paper and write about it in much more detail. Maybe it will help you if you’re just starting out with your own business, or maybe it’ll be nothing more than a welcome distraction from that other thing you’re really supposed to be doing right now! Regardless I think it’ll be a fun exercise for me to journey back down memory lane for a bit.

Gareth proposed to me on April 12th 2007, exactly five years to the day since we started dating. Although I was never really the kind of person to ever think about her wedding (I knew Gareth was ‘the one’ but as a child of a messy divorce he’d told me many times he wasn’t sure if he ever wanted to get married), I threw myself into wedding planning WHOLEHEARTEDLY. I have quite an obsessive personality and if I like something I REALLY REALLY like it… to the extreme!

I went out and bought every single wedding magazine and like many of you, I’m sure, immediately felt incredibly disappointed with what was on offer. I didn’t really like ANYTHING, but as it felt like something semi-traditional it was the only option, we started planning our wedding, inspired by what we saw. The thought that we didn’t have to get married in a fancy wedding venue, I didn’t have to wear a white dress and chair covers were something we could chuck out the proverbial window didn’t even cross my 24-year old mind.

A few months later, I was spending one of my many frantic Googling sessions looking for slightly cooler wedding stuff when I stumbled across some American wedding blogs: Ruffled, Green Wedding Shoes and the now defunct Eastside Bride, The Unbride and Snippet & Ink. They had all just started and they weren’t the big, glossy online publishers you see today. They were basic blog layouts with simple designs and were updated daily, being run by girls just like me who were also planning their weddings. Although not everything they shared was quite my style, the fact that these bloggers were updating their sites every day made them a constant source of inspiration. Plus, their ideas were definitely more palatable than what was being offered by Brides Magazine.

I was immediately hooked, checking in with my favourites every single day. After a few weeks, sometime around mid-October 2007, I decided I wanted in on the action and started my own wedding planning blog! With literally zero technical ability I managed to set up rocknrollbride.blogspot.co.uk (someone else now has that domain so if you visit it the stuff on there has nothing to do with me!) using some free blogging software and a design template. I can’t remember, or find, what I had as my ‘logo’ when I first launched, but after our wedding in April 2008, I took some of our wedding pictures, opened Photoshop and created the most god-awful blog header I’ve ever seen… 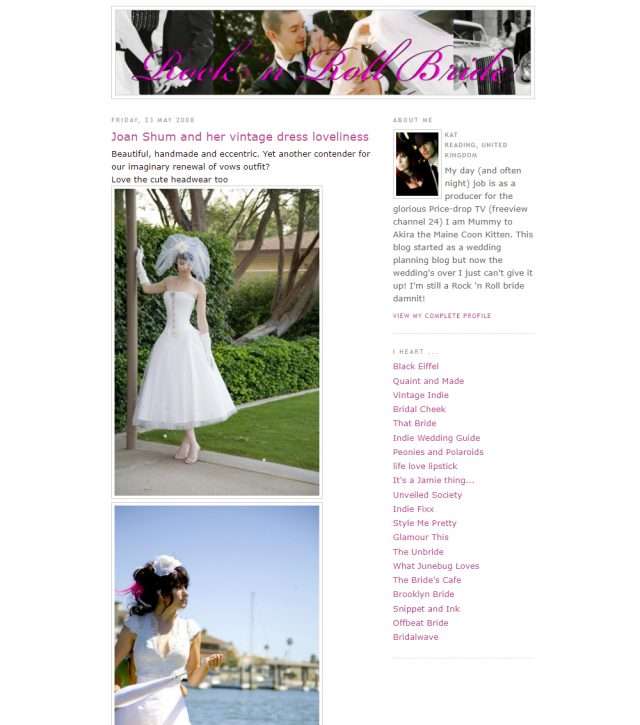 The name was inspired by our first meeting with our wedding photographers who said we were definitely the most ‘Rock n Roll’ couple they’d ever had! Looking back, we so weren’t that alternative (especially not compared to all the amazing couples and weddings I see now) but I’m grateful for that throwaway comment!

I blogged about everything and anything to do with weddings, posting multiple times a day. I was OBSESSED. I didn’t care (or realise) how rookie it was, or that the website was ugly as sin, or that my writing wasn’t great and was FULL of typos. I just wrote and uploaded and published on repeat for about eight months.

Oh, and I should probably mention at this point that I kept my online presence a total secret from everyone I knew in real life… yes even Gareth!

OK so fast forward to late 2008, and although by this point we were married, I still kept sharing wedding stuff (in secret) on the blog. The site had quite a loyal, if not small, following by this point. Remember this was before most social media (I had a personal Facebook but wasn’t yet using Twitter. Instagram and Pinterest didn’t even exist!) so I didn’t really know exactly how many readers I had, but I’d see the same names popping up in the blog comments.

Anyway, I heard about this thing called Google Analytics, something you could put on your site to see how many people were visiting it. And despite being completely technically inept, I attempted to install it myself and somehow, SOMEHOW, I deleted the whole fucking website. Yes, it was GONE, erased from the internet forever!!

So, I went to my new husband, who by the way is a computer genius (yet I was even too embarrassed to tell him that I was writing about weddings online) and told him I had this blog… about weddings… and that I’d kinda accidentally deleted it. TO THIS DAY Gareth has no idea how I managed to do this, and although at the time I was so gutted that all my work had gone (HA!) it was actually one of the best things that could have happened. It forced me to start again and re-evaluate what and why I was doing it. Like, if I was really into this whole wedding thing, and I wanted to keep writing about them, the website had to have a purpose. I was no longer a bride so it couldn’t just be a personal diary anymore, it had to be useful to people, it had to offer something different to the other wedding blogs I was reading. He helped me register rocknrollbride.com and start using a much better blogging platform called WordPress. I started it up again in January 2009. 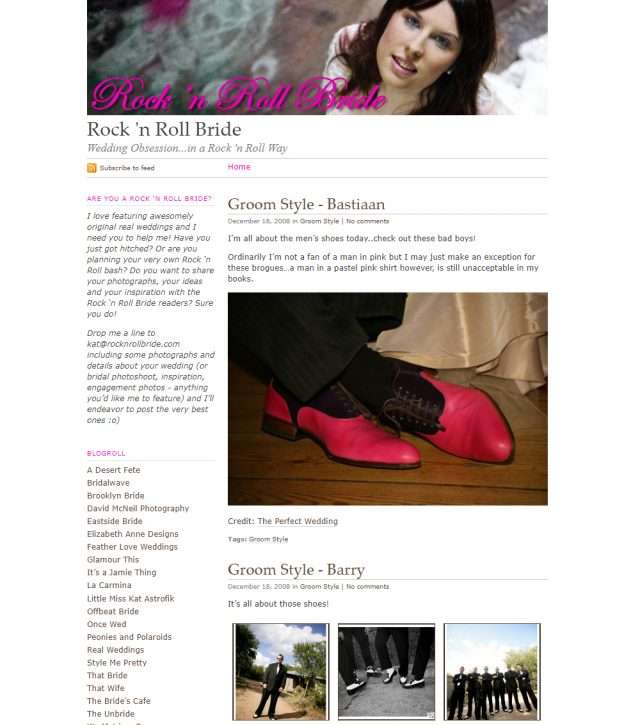 I’d like to say that I then had a lightning bolt moment or that the idea to post exclusively about alternative weddings came to me in a dream, but it didn’t really happen like that. Slowly and surely I started re-posting some of my favourite content from the old site (that we’d been able to recover from Google’s cache) and I started to notice recurring themes from the weddings that were my favourites: Lots of gothic inspired stuff and conversely loads of brides in colourful dresses, same-sex couples, outdoor weddings, themed celebrations, budget weddings, DIY ideas… Basically I loved anything that stood out as different or, you know, alternative.

The site was still hella ugly and I look back at my DIY attempts at branding and want to CRINGE so badly I can’t actually believe I’m showing them to you, but I also look back at that time really fondly. Over the next 18 months I started connecting with other people online, based in the UK this time, that were also trying to crack into the wedding industry. My friend David started shooting weddings and we both joined a Flickr group for UK wedding photographers (like you might join a private Facebook group today). In that group I discovered lots of other UK photographers. I’d see the weddings they were shooting and ask if I could feature the ones I really liked. Some of the people I met in this group are still some of my friends today!

A few of us would even met up in person sometimes for drinks, dinner or to take photos. It was SUCH a fun, experimental time. No-one was watching us as we were just figuring everything out as we went along with no real idea what the outcome might be. I actually remember having a conversation with one girl imagining how cool it would be if, one day, people realised they could actually do their wedding however the hell they wanted! This same girl, who wanted to create wedding stationery, offered to design me my first ‘proper’ branding in exchange for some publicity for her new company on my site. Looking back, it’s not at ALL my taste now but everything was finally starting to look a bit more cohesive! 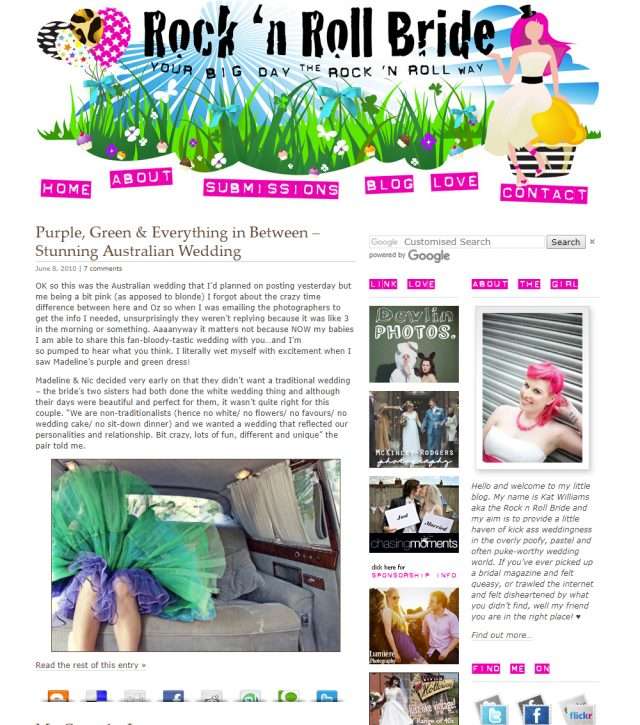 I’d like to leave you with one final thought, a reminder that everyone has to start somewhere. If you’re thinking of starting your own business but you’re paralysed by fear of failure, or because you don’t really know what you’re doing, WE HAVE ALL BEEN THERE.

One of my bosses at my job around this time (I was working in television) told me he thought online video was the future and that I should be making videos. Looking back, he was totally right (remember this was way before YouTubers were a ‘thing’ and if I’d started a YouTube channel at that point my business might be VERY different today!) Anyway, he helped me put together this now extreaaaaamly cringe-inducing promo for the website.

OH MY GOD, look at me, I’m such a baby. I’m also super awkward on camera (hence why I never pursued the YouTube thing!) but I hope it gives you a laugh and maybe even inspires you because hell, if that girl with a big stupid bow on her head and a giant plastic necklace can create a six-figure business, produce a print magazine and do it all from her spare bedroom, then maybe you can too.