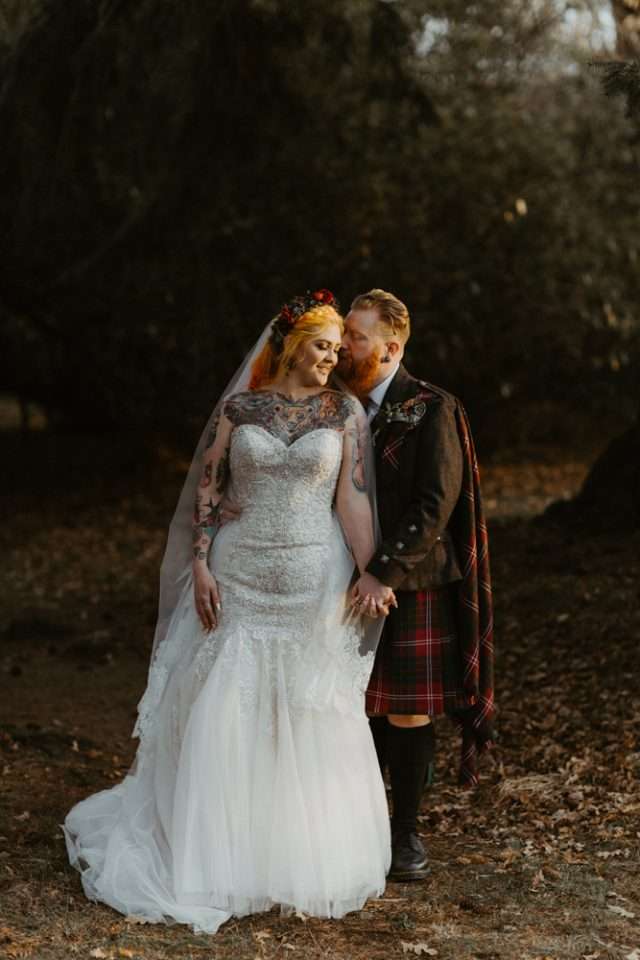 “Christmas is a very special time of year for us, hence why we got married in December”, began the bride. “We met through a mutual friend at the Edinburgh Christmas market and each year we return to the same spot on the same day to have a kiss. We also got engaged on Christmas Day a year after we met.”

“The inspiration for the wedding was the atmosphere of a Christmas market. We wanted Christmas but without it involving the snowmen or Santa… It wasn’t really about Christmas it was about us but still had to capture that warm festive feel. We used simple inspiration from German markets and the Edinburgh market with all the green pines and lights all around – it was magical.” 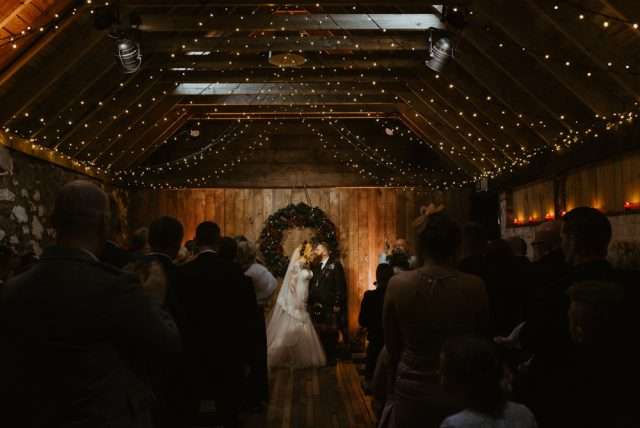 They actually managed to save money on the decor, not only by doing a lot it it themselves, but because they were married in December. “Being a December wedding we could get away with not having flowers”, Sophie explained. “I did try and find florists that would come set us greenery and festive pines etc and the cost was far more than I expected so we did it ourselves. We collected holly from people’s gardens (we did ask permission!) and instead of bouquets the bridesmaids carried lanterns.” 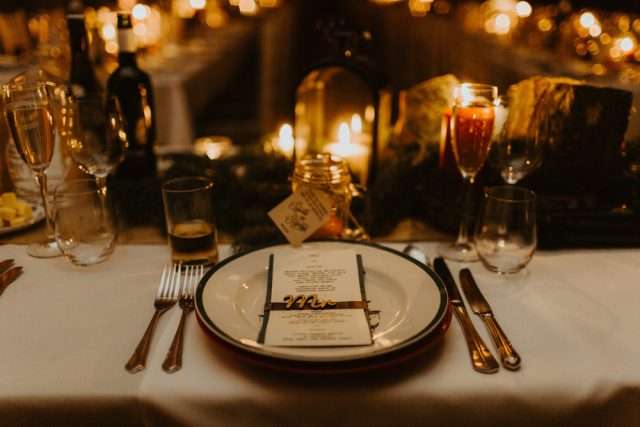 The rest of the decor included Christmas trees, over 6000 fairy lights, more lanterns, candles, logs and pine cones that they collected themselves. “We also had conkers that we spray-painted gold. Our friend made these gorgeous little pine cone mice with copper wire and beads. Everything that we could have collected our got ourselves, we did it. We collected the lanterns, candles and logs from people that were giving them away free. We could have got it all from the venue or from other suppliers but that would have cost us more and I say if you can do it yourself then go for it!” 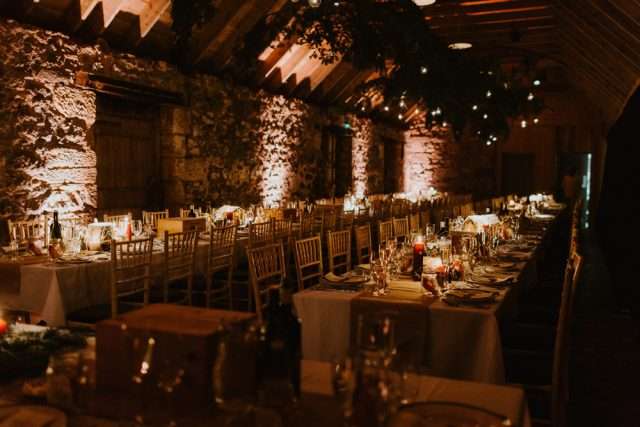 “Our biggest DIY project was our wreath. We wanted to stand in front of a giant wreath when getting married but finding one was near impossible or… bankrupting. So we looked up how to make our own. We made it from pool noodles and a hoopla hoop, a little green tape, some fairy lights and berries! It took us two full days but we couldn’t be happier with it. It was a metre wide all round it wasn’t easy to transport but this is something we will cherish always. I also made our centrepieces which were gingerbread houses all made and decorated by hand. We flat packed them to transport them to the venue and put them together the day before the wedding.” 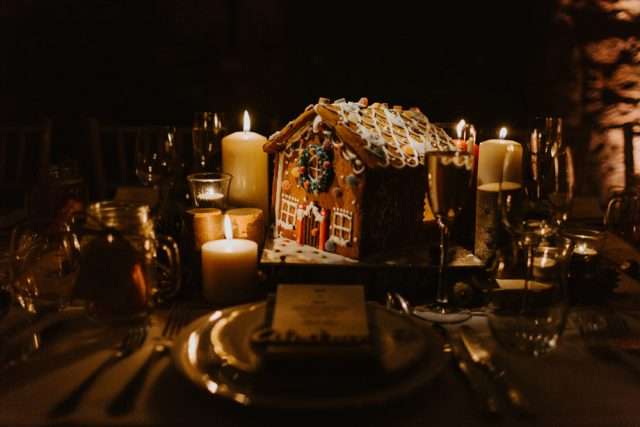 The food was also really important to this couple, they wanted to recreate the cosy, warm feeling of Christmas dinner. “So many people at the wedding said they had never been to one like it before, and I think the meal had a lot to do with it but also the atmosphere. We had created this cosy comfort family feel and people were enchanted by it. We wanted the meal to be like a big festive dinner so everything was actually set out on the tables for people to help themselves on big platters. It was like going to your mums for a Sunday roast, all the veg and gravy in the middle of the table but just done on a large scale.” 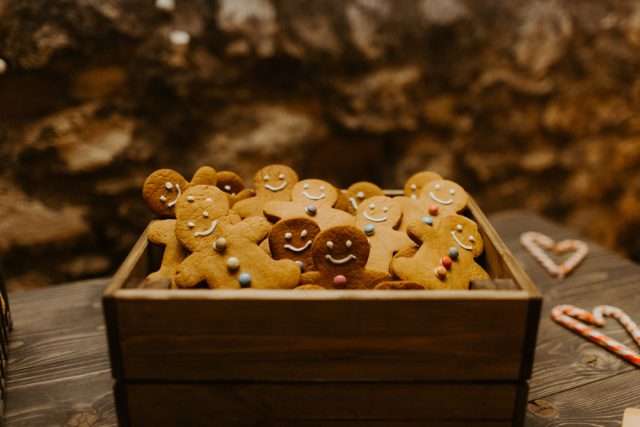 They took three years planning the wedding which meant they could collect everything they needed slowly and save money as they went. “As we took three years to plan I think years I think the best thing about the wedding was seeing it all come together at the end. I stressed that maybe I had missed something but when we were setting it all up the day before it was great to see that we had successfully planned an event. We felt like proper adults!” 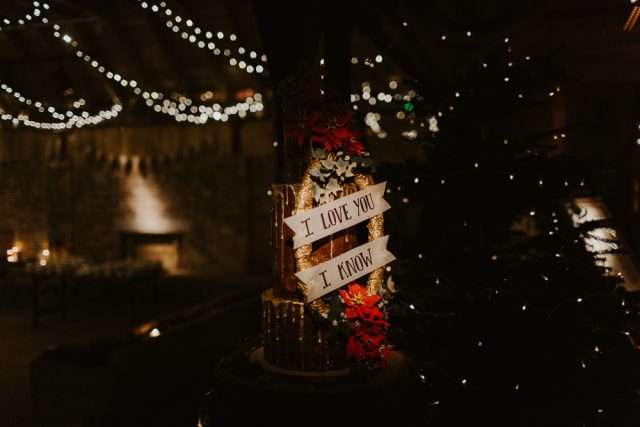 “My advice for other couples would be to remember about VAT!” she advises. Always remember to check if the prices you’re being quoted include VAT or not as it can really bust your budget if you have to add it on top. Also keep a day-to-day diary and write down when you’ve ordered something and when payments are due. Doing this was the best thing I could have done to keep me on track and you can also pop in little notes for yourself like useful contacts and email addresses.” 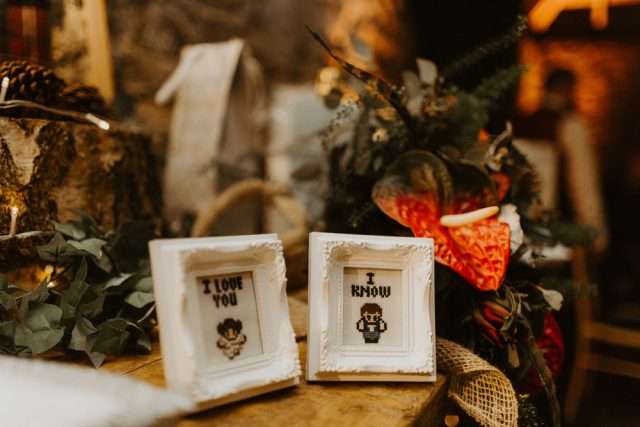 “You don’t have to stick to what others do but don’t try and stretch yourself too far. Seek help where you can get it even if it seems trivial like folding napkins! There are people who will help you. Enjoy the little moments and communicate with your fiancé. There’s a reason you are BOTH getting married so it’s up to you BOTH to help each other to make decisions.” 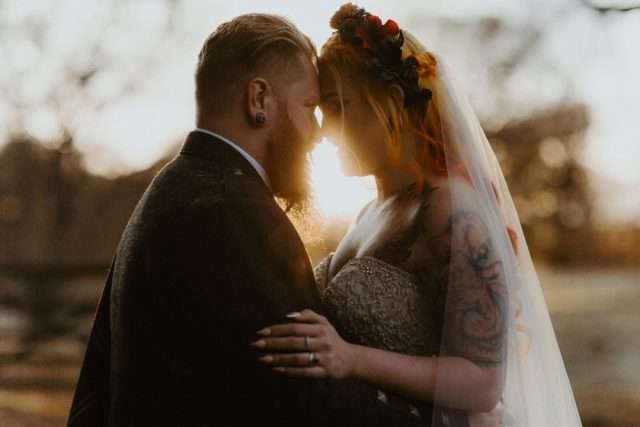 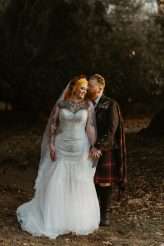 Lydia and Mike, who met in a tattoo shop and now work together as tattoo artists, were married on December 7th in Leicester. They wanted their day to reflect the season so they picked lots of Christmassy and winter-inspired details. The bride in particular loves Christmas and history which also influenced their venue choices.