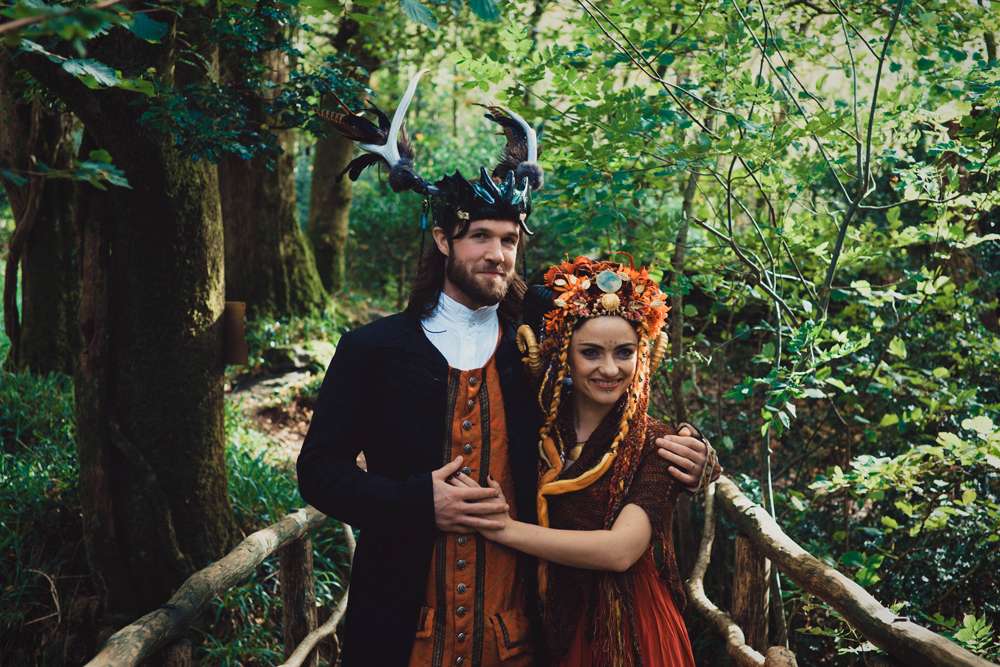 Stefanie and Loren picked 22nd to 24th September as the weekend to celebrate their wedding, chosen to coincide with the autumn equinox. The bride being an alternative wedding planner herself meant she handled everything. She also put together all the flowers (with her team of helpers!) and the groom created the invitations. 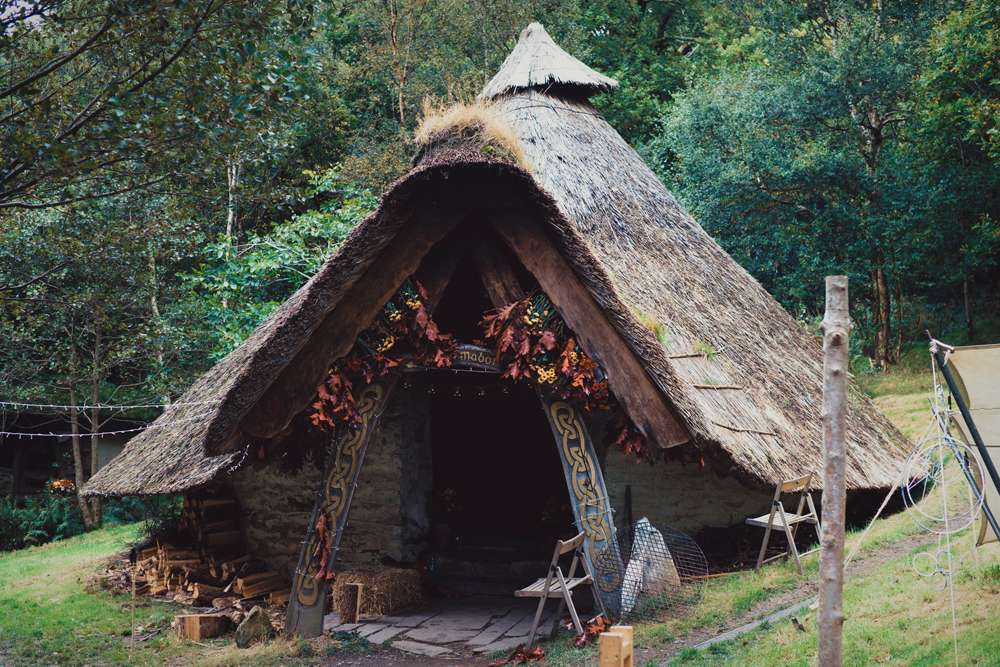 The weekend took place at Cae Mabon, and eco-friendly retreat centre in Snowdonia. “The whole site of Cae Mabon looks like a medieval hobbit village as all the dwellings are traditionally built eco-friendly designs” Stefanie began. “So in terms of décor we hardly needed to do anything at all. They don’t normally allow weddings here, just small retreats so we were very lucky and had to really honour the space by using eco-friendly shampoo and conditioner and recycling every single bit of our wedding waste. The whole site has beautiful carvings etched into the trees like the Fairy Queen who watches over the woods, medieval style thatched huts and even a wood-heated natural hot tub right next to the stream so other than adding a few flowers, signage and fairy lights, we didn’t need to do anything!” 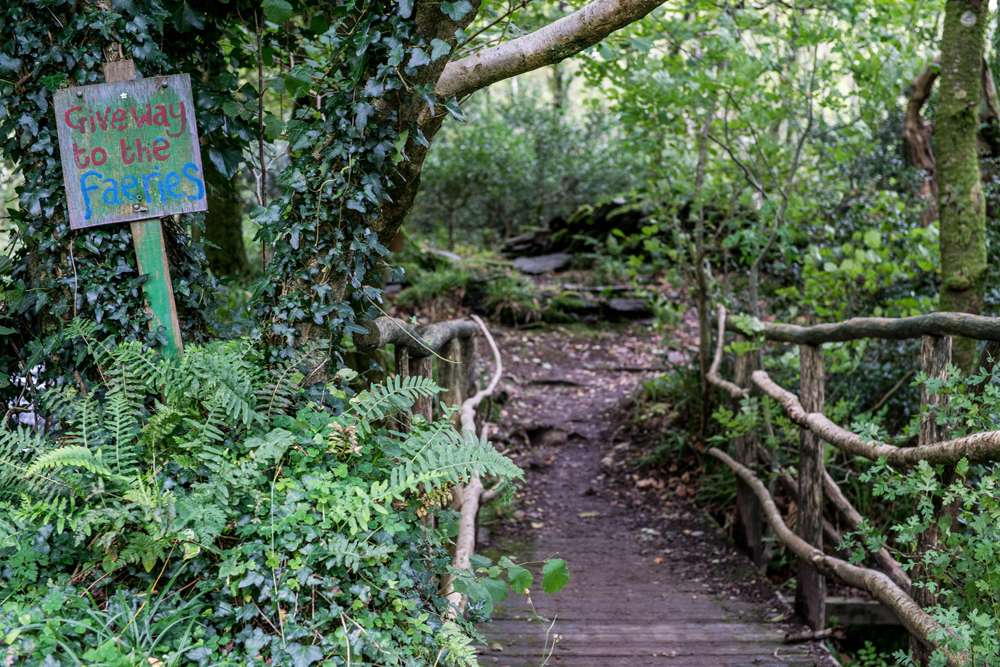 “Our inspiration and theme was the elements, nature and the autumn equinox – full on pagan fantasy basically!” she continued. “We are both artists, Loren’s a conceptual designer and tattooist and I’m a fantasy writer, so we like to spend most of our time in the colourful world of our imaginations. All my flowers were bright reds, yellow and orange and we really wanted something warm, vivid and bold.” 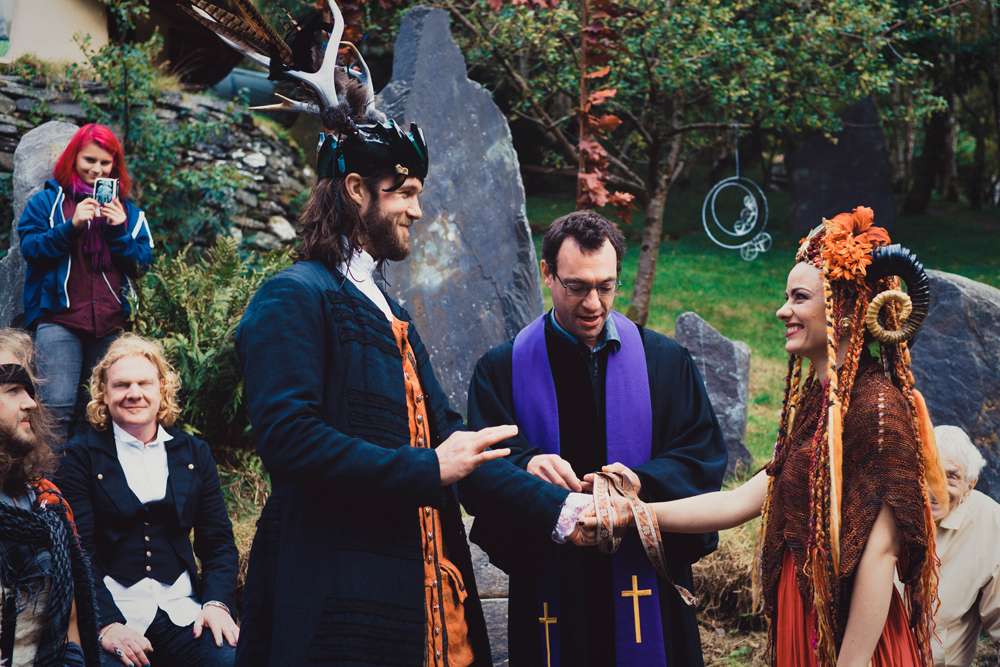 “I love films like Labyrinth and The Dark Crystal (anything designed by Brian Froud!) and we both love fantasy so we wanted something that looked and felt out of this world. We wanted people to fully immerse themselves in a magical setting where magic seemed possible, like they were stepping back in time or into the pages of a folk tale! Our guests came as people dressed from so many different time periods you literally could have been in any century! Above all, we wanted to escape normality and get away from our daily lives completely.” 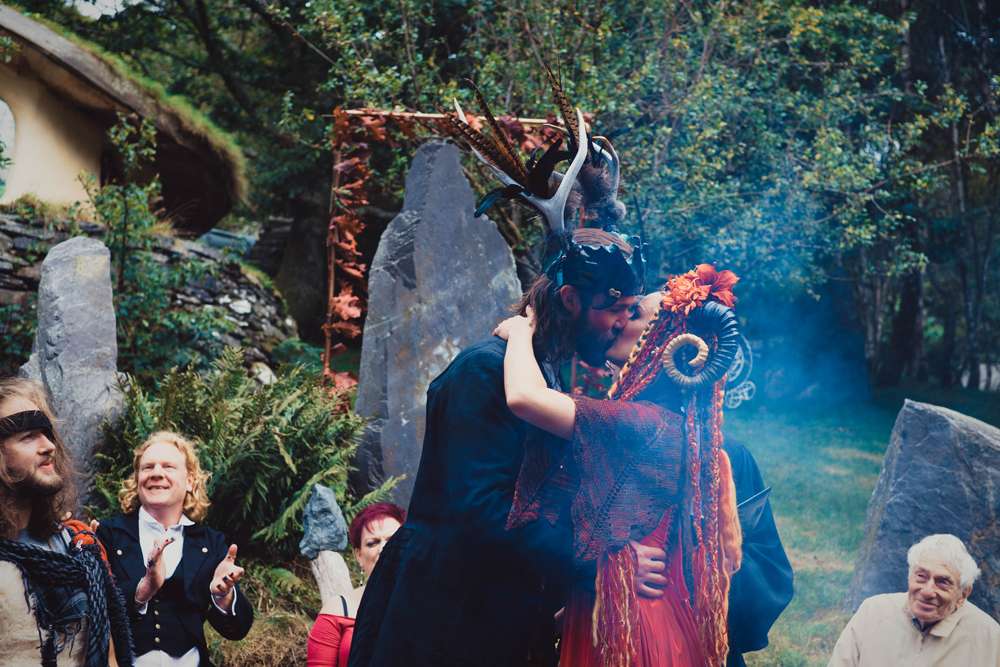 Their uniqueness of their day didn’t really come from their theme at all though, it was all down to everyone pitching in and really getting involved. “Whilst we never officially told people to come in fancy dress, our friends and family know us well and guessed we’d be breaking tradition, so they really made a huge effort”, she said. “Loren really spent a lot of time getting his outfit right as it was quite difficult for him to find something classy and original. I think he bought three different outfits before setting on the final one! We had guests wearing chainmail armour, Viking warrior outfits, Jester costumes, medieval gowns and even a mini-unicorn! We had to stress many, many times for people not to wear high heeled shoes because we wanted them to be able to run around and climb up and down the hills, especially when it was dark and only lit by tiki torches!” 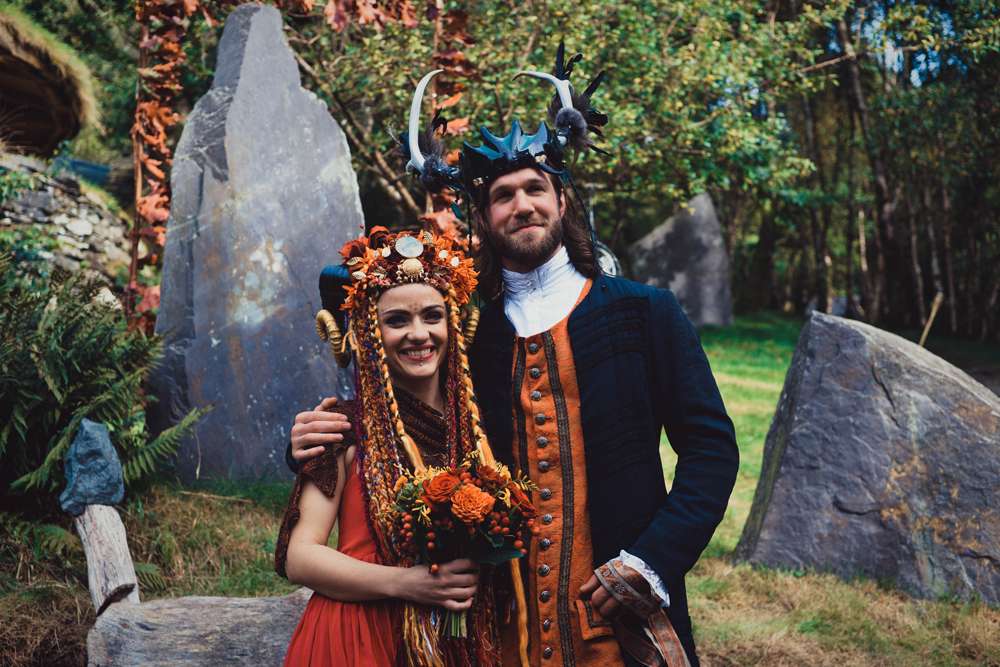 “For three days our guests were living, eating, sleeping (and even bathing together!) as a community – everyone was mucking in for the good of the clan and it wouldn’t have worked if people weren’t so up for it. We loved Cae Mabon because, aside from its history, there were just so many things to see and do. People could explore, enjoy and do whatever they wanted to do when they wanted to do it. There was a loose programme of things going on but we people to have the freedom to decide what they wanted to do, so some ended up drinking around the fire in the stone circle, some walked to the nearby lake, some were in the hot tub and others were jamming in the round house. It flowed beautifully!” 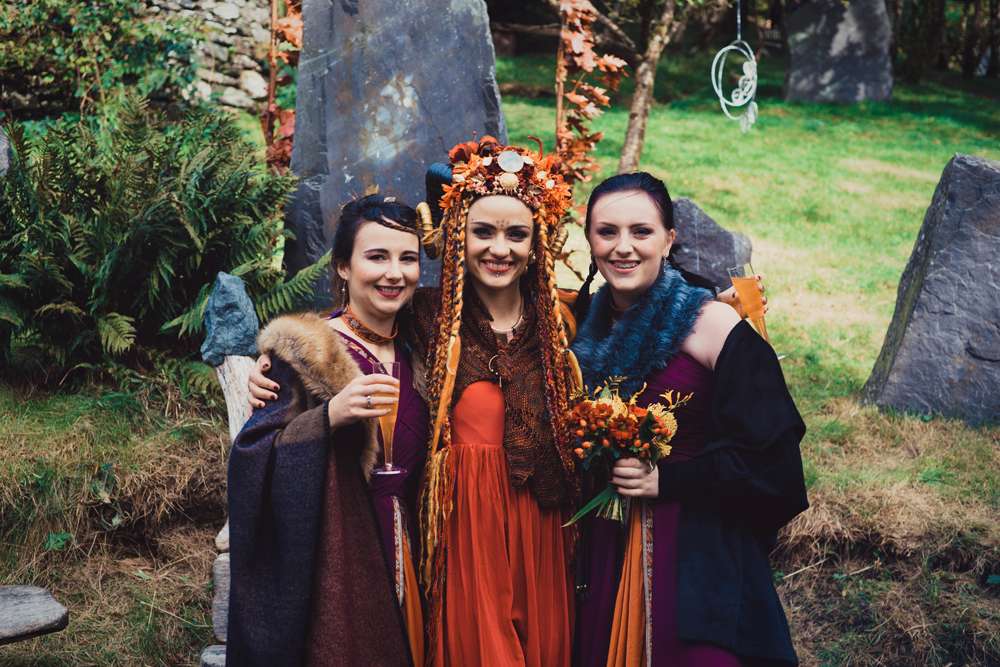 The ceremony was the part of the weekend they were most looking forward to, and the bit they were most proud of how it turned out. “To start we had a reading from one of my best friends Aphrodite (The Goddess of Love, of course!) which was a poem I’d written to Loren when we’d first got together. For our vows we memorised Pablo Neruda’s Sonnet XVII (I Do Not Love You…) and divided the poem into two halves, so that I read the first half and Loren read the second. We also had two wedding crowns made for us by people close to us (Loren’s was made by his brother Wyeth who collected antlers and bear teeth in Colorado) and we decided we should complete a challenge in order for us to ‘win’ our crowns – like in olden times when you set a challenge for your suitor to prove their worth! The night before the wedding our officiant, Rv Nemu, asked all our guests to suggest challenges for us. We did not know which he would choose. I had to carry Loren around the campfire whilst listing nine of the things I love about him and Loren had to climb a tree of my choosing and sing a love song to me from the top. Both challenges were pretty hilarious! Once we’d completed them, we won our wedding crowns and literally became the Fairy King and Queen of Cae Mabon! Rv Nemu then made us go and spent 15 minutes alone in the woods after the ceremony and we walked the labyrinth together and had a smooch.” 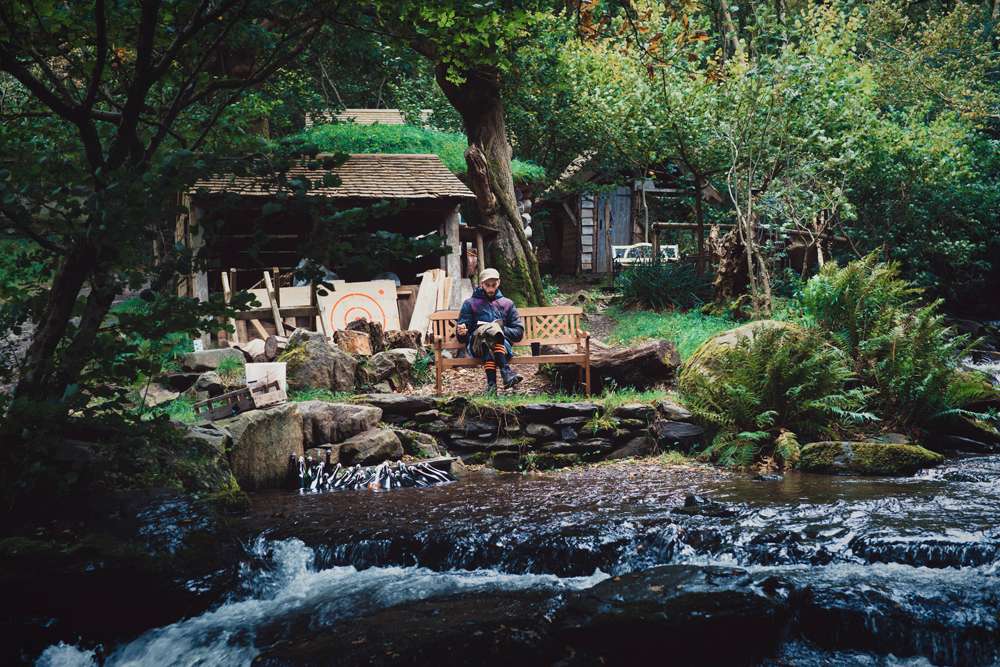 Their total spent was £10,000, their biggest cost being alcohol! “Buying in all of our alcohol in was our biggest expense as Cae Mabon doesn’t have a bar of its own and is miles away from any shops. We had kegs of beers delivered from Purple Moose Brewery and had homebrew strawberry champagne made by my friend John Chipperfield, but we totally overdid it and there was so much wine left over on the Sunday I was giving it away to people as they left!” 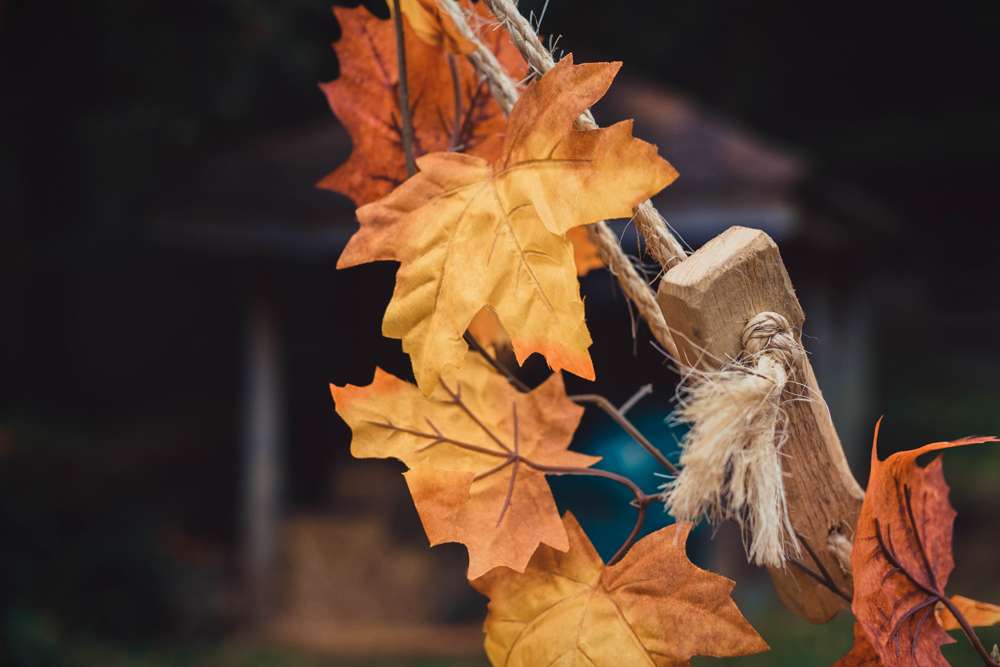 “We saved money by asking everyone to contribute £50 each to accommodation as we were essentially providing all food and drink for everyone from Friday to Sunday. Whilst our caterers cooked all food on the Saturday, myself and my family cooked the Friday evening meal and three rounds of breakfast on Sunday (there was a lot of people to feed!)” 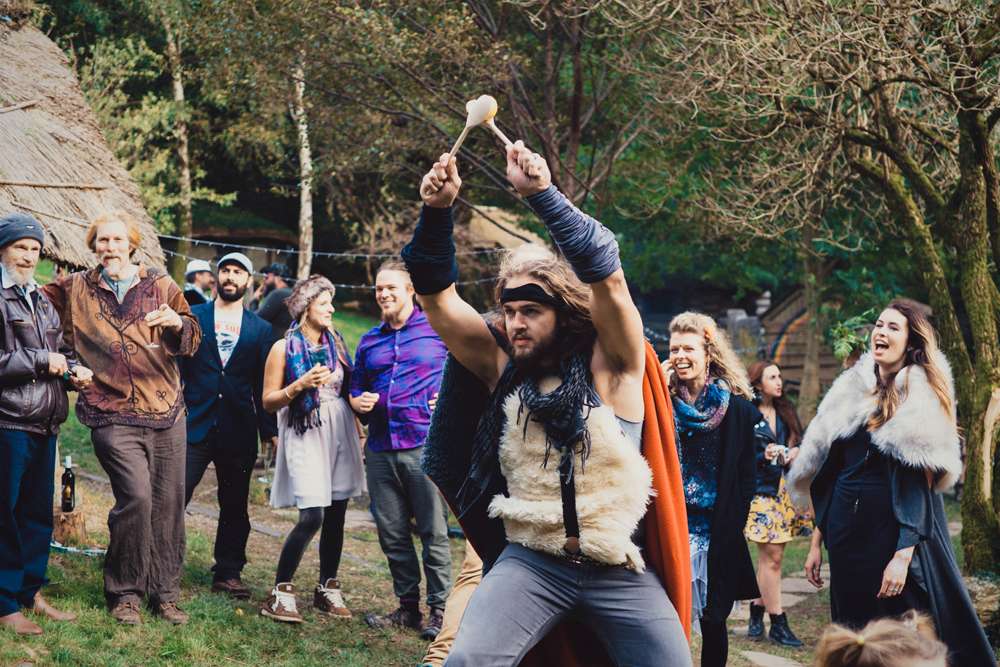 “The thing we loved most about our wedding was the fact that that we allowed our creativity to really take the reins and didn’t worry about looking daft or seeming OTT”, she concluded. “It made everyone else feel really relaxed and allowed them absolute freedom too. The plan worked. People were jumping out of the hot tub straight into the stream, our friend Pat was running around naked shouting ‘Clothes are for sissys!!’ some were making sculptures out of pebbles in the stream, others were making their crowns and garlands from things they foraged in the woods! Everyone just got really crafty and let their hair down.” 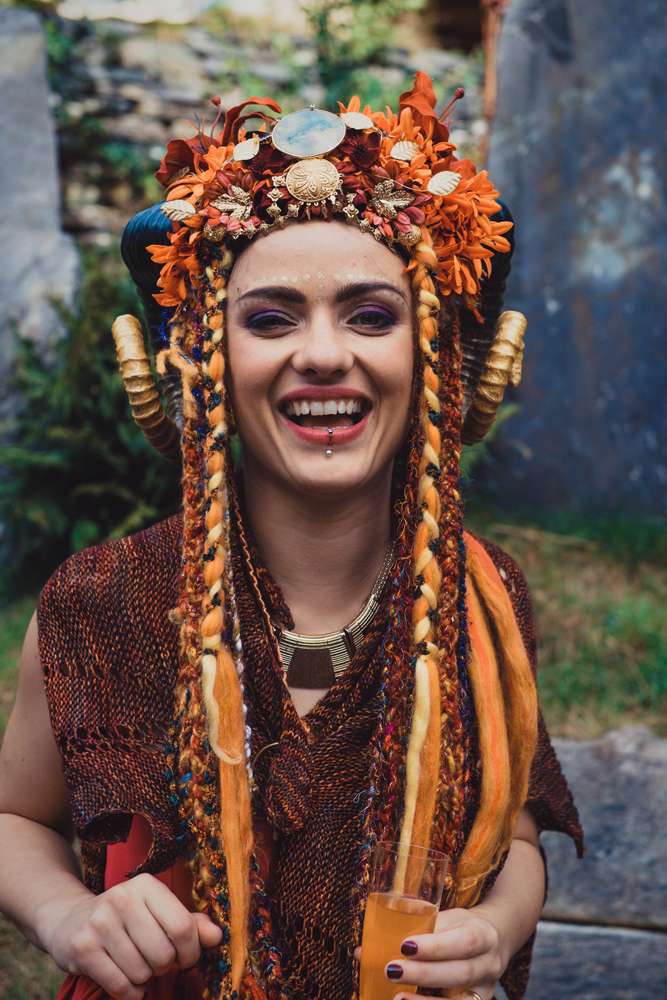 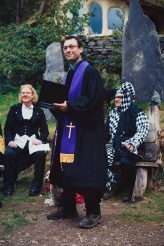 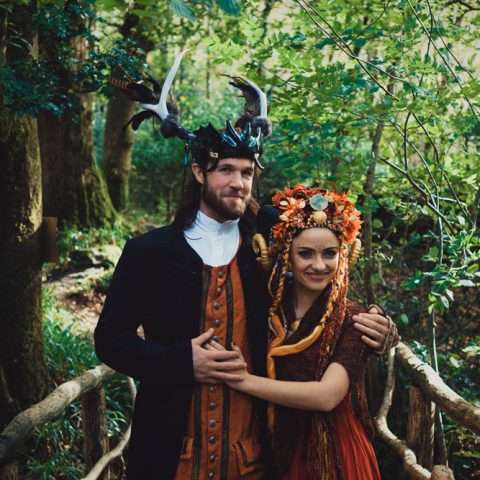 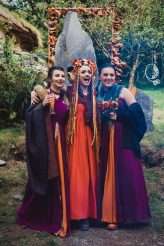 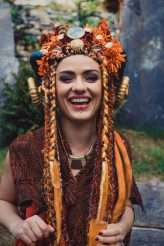