Dan & Charlotte had a two-day wedding celebration in Wales. They started off planning just the Saturday wedding by the beach with a pagan blessing, as this was what Charlotte really wanted. However they soon realised that legally, and for family reasons, they would need to have another ceremony with a registrar present, in a venue sanctioned for wedding ceremonies. “I did view having to have both ceremonies as a bit of a compromise”, Charlotte explained, “But rather than just doing the legal bit in a quick service on our own in a registry office or something, we set about finding somewhere just as beautiful for that part and made it into it’s own distinctive day. We also really wanted our wedding to last a bit longer than the usual  one day which is why we split it into two. I would advise anyone planning their wedding to think about spinning things out a bit! It’s all over so quickly on the day and we really treasured the extra time we gave themselves over the weekend to spend quality time with everyone that came to celebrate with us.” 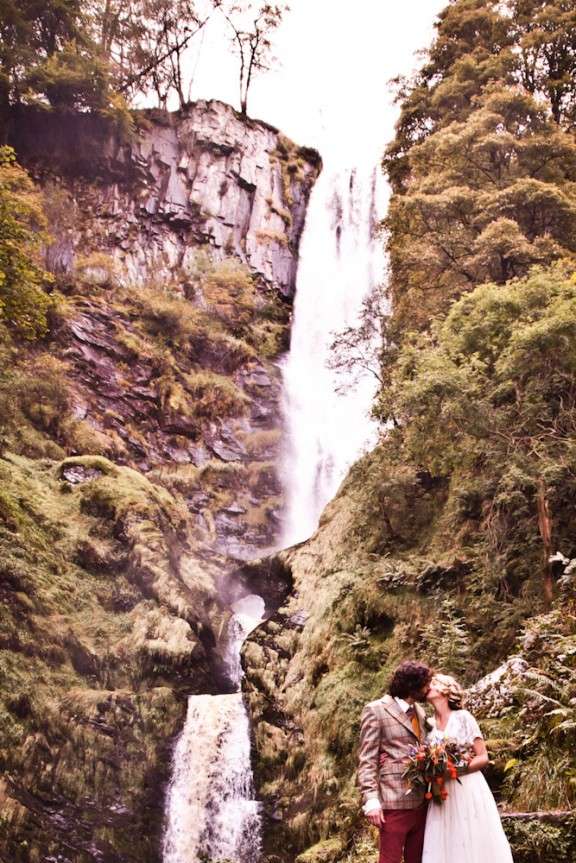 The first ceremony, on the Friday, was held right by Pistyll Rhaeadr, the highest waterfall in Wales. Afterwards they had a small reception at The Plough Inn – local pub in the Welsh village of Llanrhaeadr Ym Mochnant (!) They kept it informal with a roaring fire, a simple buffet, and a cosy, intimate and very laid back atmosphere. “We run our own business and dare to do things differently on a daily basis”, explained the bride. “Our shop was recently voted the ‘7th Most Unusual Shop in the UK’ by the Guardian, so I suppose it was it was inevitable that our wedding would be a bit different! In terms of inspiration we both love nature and being out in the countryside, and I felt really strongly about being married as ‘outside’ as possible. We started visiting this waterfall a couple of years ago, so as soon as we realised we could get married at there it made complete sense. It’s a really special place, a lush green Welsh valley with the mighty fall like a hidden gem. There’s a calmness there, a natural spiritual feeling.” 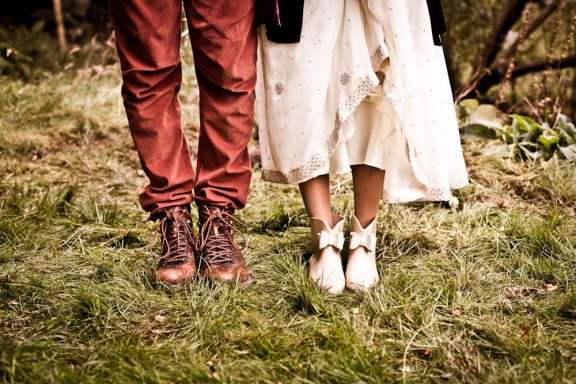 “Bob, our dog, was the ring bearer!” she continued. “He’s a massive part of our lives so it was nice to get him involved. One of the favourite parts of the day for us was walking down the river with everyone to a specially prepared spot, where we planted a willow tree. I said a few words and everyone helped cover in the roots. A lovely thing to do, and we plan to visit often to see the tree grow over all the years to come! We also loved having our photos taken by the beautiful waterfall.”

The bride’s dress was made by hand from a sari, by Made In The Mill, who they stock in their store. Her silver heels were by Vivienne Westwood but for the muddy bits she changed into cream wellies from eBay! 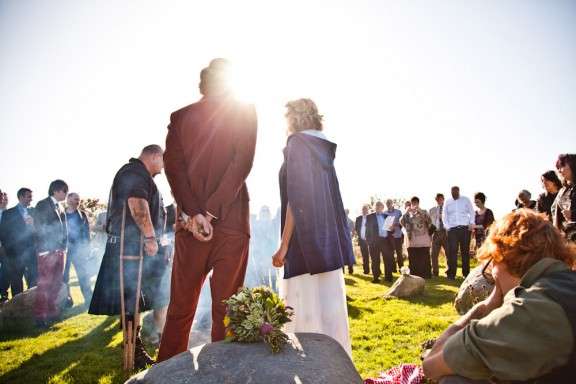 Day two kicked off with another ceremony at a stone circle in a field by the sea at Red Welly, where their Saturday reception was then hosted (in a tipi!) For this second day, Charlotte wore a vintage wedding dress which she customised herself. “I knew she would like to have a pagan blessing on the Saturday, but it was only after a chance meeting with a lady on a train – just a week or two before the wedding – that we were able to make it happen!” she explained. “This is proof that things can come together perfectly, even at the last minute! Even the weather couldn’t stop our plans – the wind had been so bad up to the Thursday that everyone was feeling a bit nervous about spending the day in a field. But that Saturday was sunny and mild and just glorious! So incredibly lucky.” 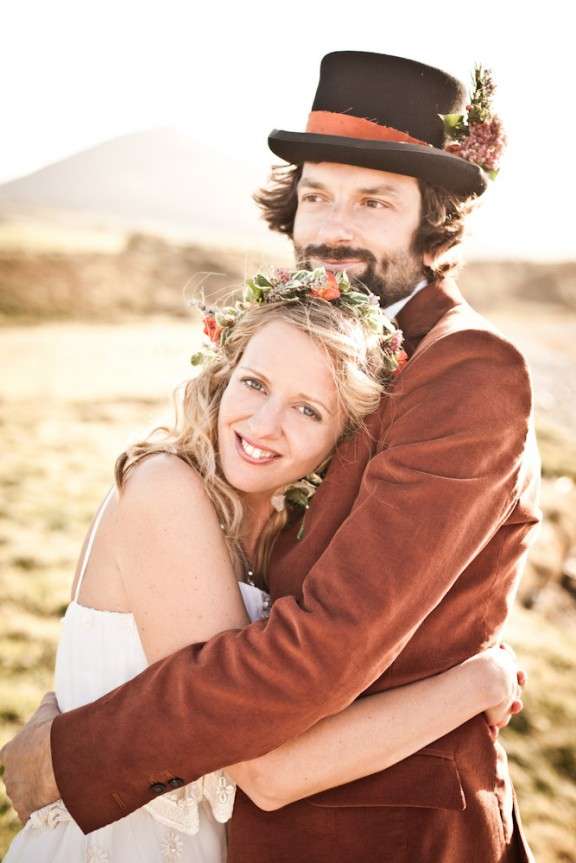 The tipi reception was inspired by the couples’ love of music festivals. They had live bands and DJs and partied way into the night! “Dan asked me to marry him in the middle of a field, at Glastonbury, all the way back in 2007… so it seemed appropriate that the 2nd part of the wedding took place in a field, with live music and dancing beneath the moon!” Charlotte continued. “Dan said during his speech that – for anyone who hasn’t ever been to a festival – this part of their wedding weekend was about as close to a festival as they could make it! Feeling a strong connection to nature I chose the weekend of the Harvest Moon for their wedding, and as that magical full moon hung in the sky we danced our first dance as husband and wife to ‘Harvest Moon’ by Neil Young.” 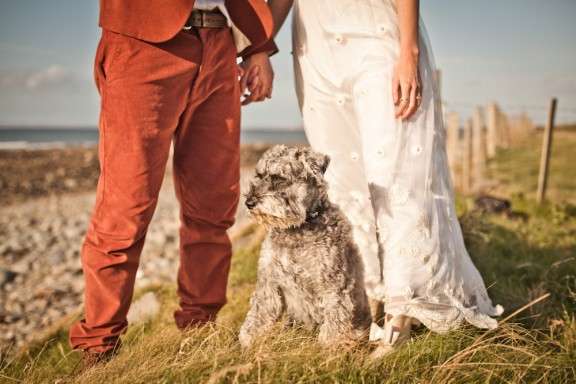 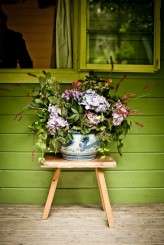 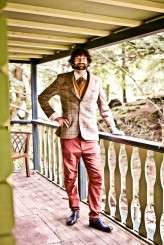 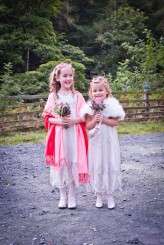 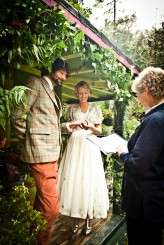 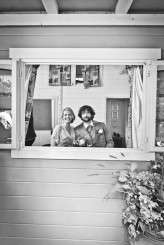 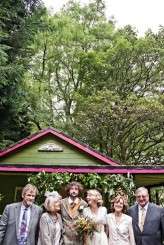 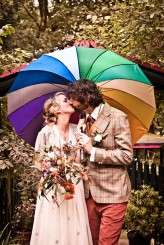 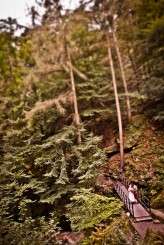 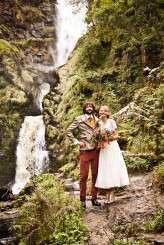 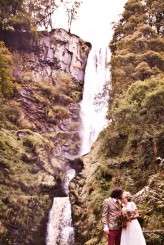 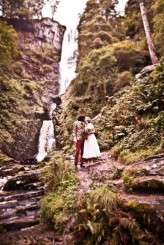 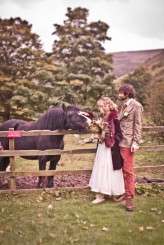 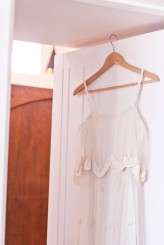 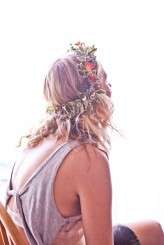 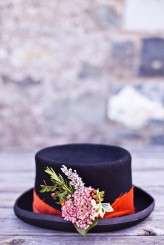 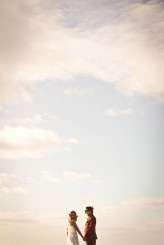 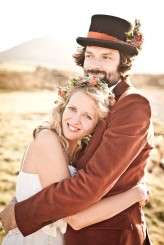 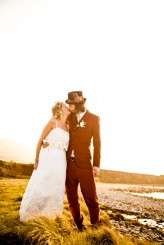 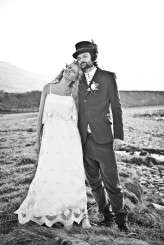 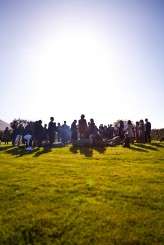 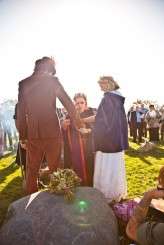 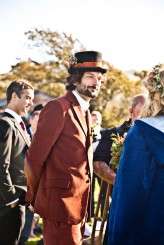 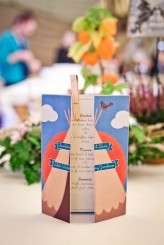 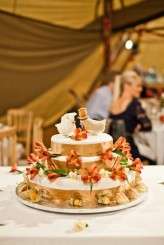