Valeria (the bride) and Nicola’s (the groom) Victorian gothic wedding was held at the impressive Villa il Poggione in Fauglia, Italy. The venue was decked out in medieval regalia which suited their theme perfectly.

“I would call our theme Victorian Gothic with a pinch of Steampunk, Game of Thrones and a medieval atmosphere”, began Valeria. “After we bought our clothing, we decided to turn the wedding into a themed one! We thought that it could be original and funny for everybody. We chose the Victorian Gothic simply because it was the style of our clothing and we love the style of this period. Fortunately, we have fantastic relatives and friends, so almost all the guests accepted the challenge. It’s very cool to see our wedding pictures with people in themed clothing. We didn’t expect this great participation, so we were pleasantly surprised!” 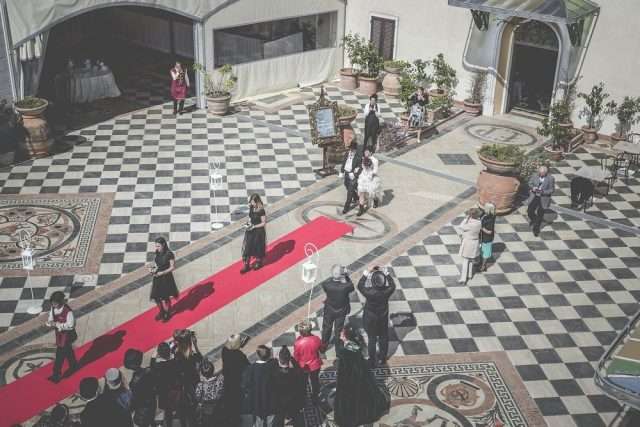 Their ceremony was held at the end of a dramatic red carpet, in the courtyard of the villa. “We were legally married the day before with just a couple of witnesses”, she explained. “So we decided to make our villa ceremony into OUR ceremony. We chose the red carpet instead of the classic white one in order to give a gothic touch. We wanted a simple, brief, romantic and original ceremony, so we decided to use some quotes from Harry Potter and The Lord of the Rings between the classic script. The wedding march was played by Brian May and Queen because I had always dreamed of walking down the aisle with a song played by a rock guitar. Even the end of the ceremony exit was accompanied by a revisiting of the classic wedding theme in a power metal style.” 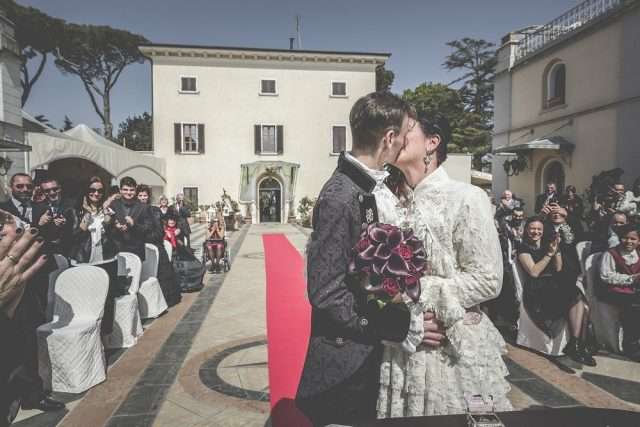 The villa really was the perfect setting for their themed wedding. “The hall decorations were made by the villa’s old owner Roberto”, she said. “He’d even made the street lampposts, iron sculptures, hall lamps and chandeliers! Even the decorations like animal heads, barrels and shields were chosen or made by Roberto. When we saw the medieval hall for the first time, we couldn’t believe how stunning it was. We were astonished. The villa’s wedding planner, Elisabetta, made the fantastic starter buffet settings and prepared the tables for us.” 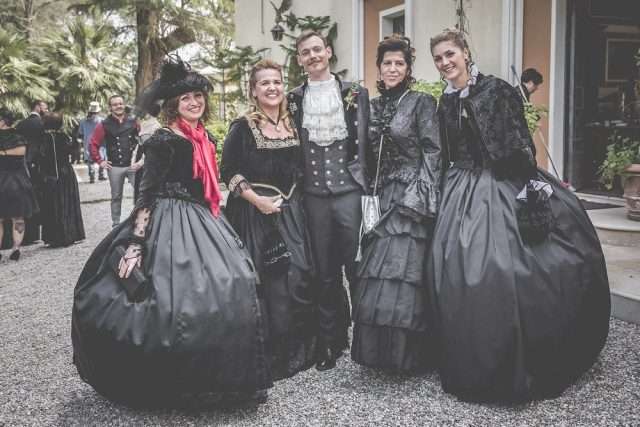 In terms of DIY they made all the Game of Thrones themed items for the reception. “I designed the wedding invitations, the menus, the Game of Thrones paper centrepieces and the pages inside our guestbook. We bought black candles for the candle holders (the villa had only white ones) and a DIY kit of wedding steampunk party favours from Amazon. We spent three nights making almost 100 of them! We chose the Game of Thrones theme for the lunch because the hall had a medieval style and almost all our friends and relatives love this series, so we named the tables after Westeros families.” 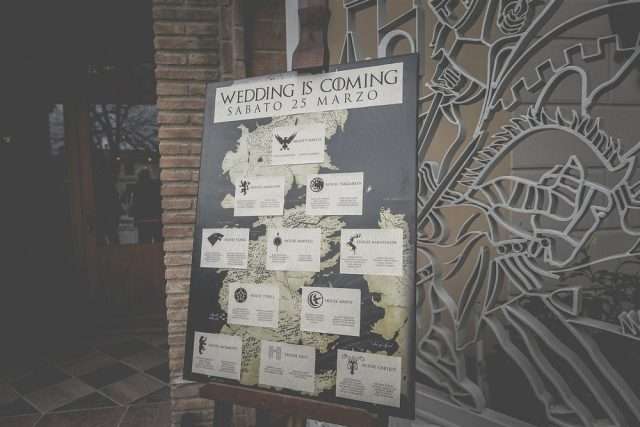 The bride in particular really loved planning their wedding. “Everyone told me how difficult wedding planning was but I didn’t find it hard at all! It was easy and fun for us. You can find any kind of advice, ideas and sources online (Rock n Roll Bride obviously gave us a GREAT help and lot of ideas, I love you Kat!)”

“Our advice for other couples would be to keep calm, take a breath and remember that nothing is impossible!” the bride concluded. “Enjoy the happy months during the organisation of the wedding with your partner-to-be, because they will never come back. Remember, your wedding is just for you and for your partner, not for other people.” 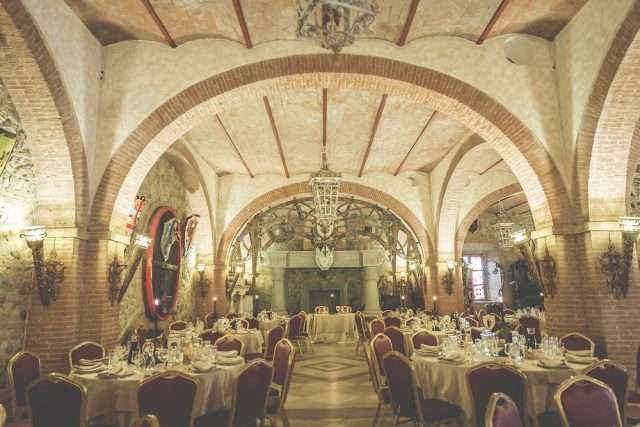 “Also, don’t be shy to express yourself and your ideas”, said the groom. “Don’t be afraid to be judged or to be a joke to other people. Have fun during the organisations because these are the best moments together; you don’t need to spend a lot of money for having a dreamy wedding, but try to be smart with your purchases.” 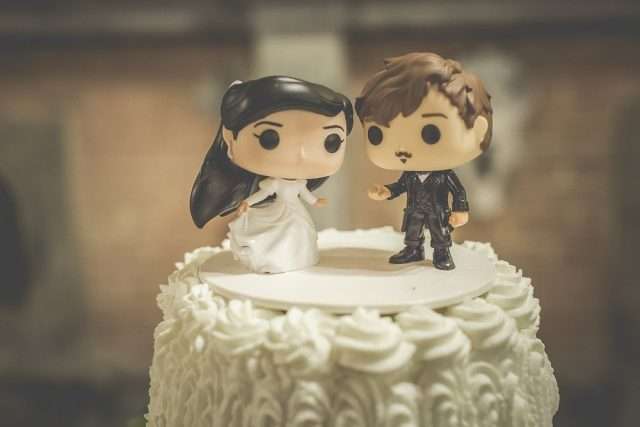 Vinique and Craig were married on their ten year anniversary. The day was inspired by steampunk and Victorian influences. "Our wedding was Victorian steampunk inspired with a hint of vintage and a twist of gothic charm!" said the bride. "Our inspiration came from what we love as a couple. It’s a celebration of who we are. We wanted it to be a reflection of our personalities and interests."