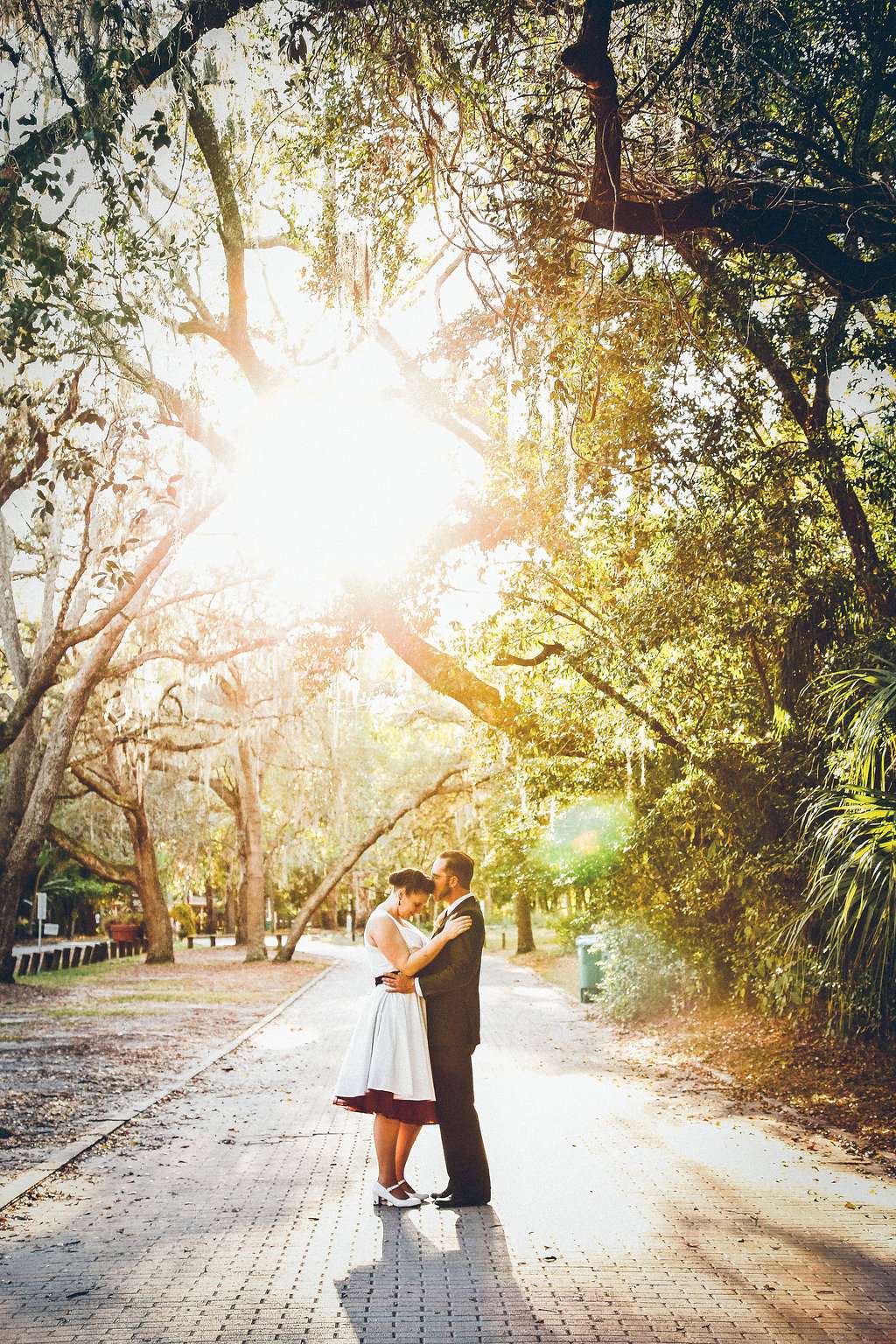 Leslie and Drew were married on 31st October 2016 as so, naturally, they wanted their wedding theme to be Halloween. The day was complete with skulls, creepy dolls and all the guests dressed in costumes!

“We’d been together for nine years and wanted to celebrate that,” began Leslie, “anything that wasn’t fun, we didn’t want. We ended up not having bridesmaids or groomsmen because we wanted everyone to feel included. Our invitations said ‘costumes mandatory’ on them. It made the atmosphere, some people were scary, some were pretty, but no one was wearing something they didn’t want to be in and everyone had fun with it. And because costumes were mandatory everyone assumed we’d be dressed as Beetlejuice or something, so when we showed up in a white dress and suit it was a surprise!” 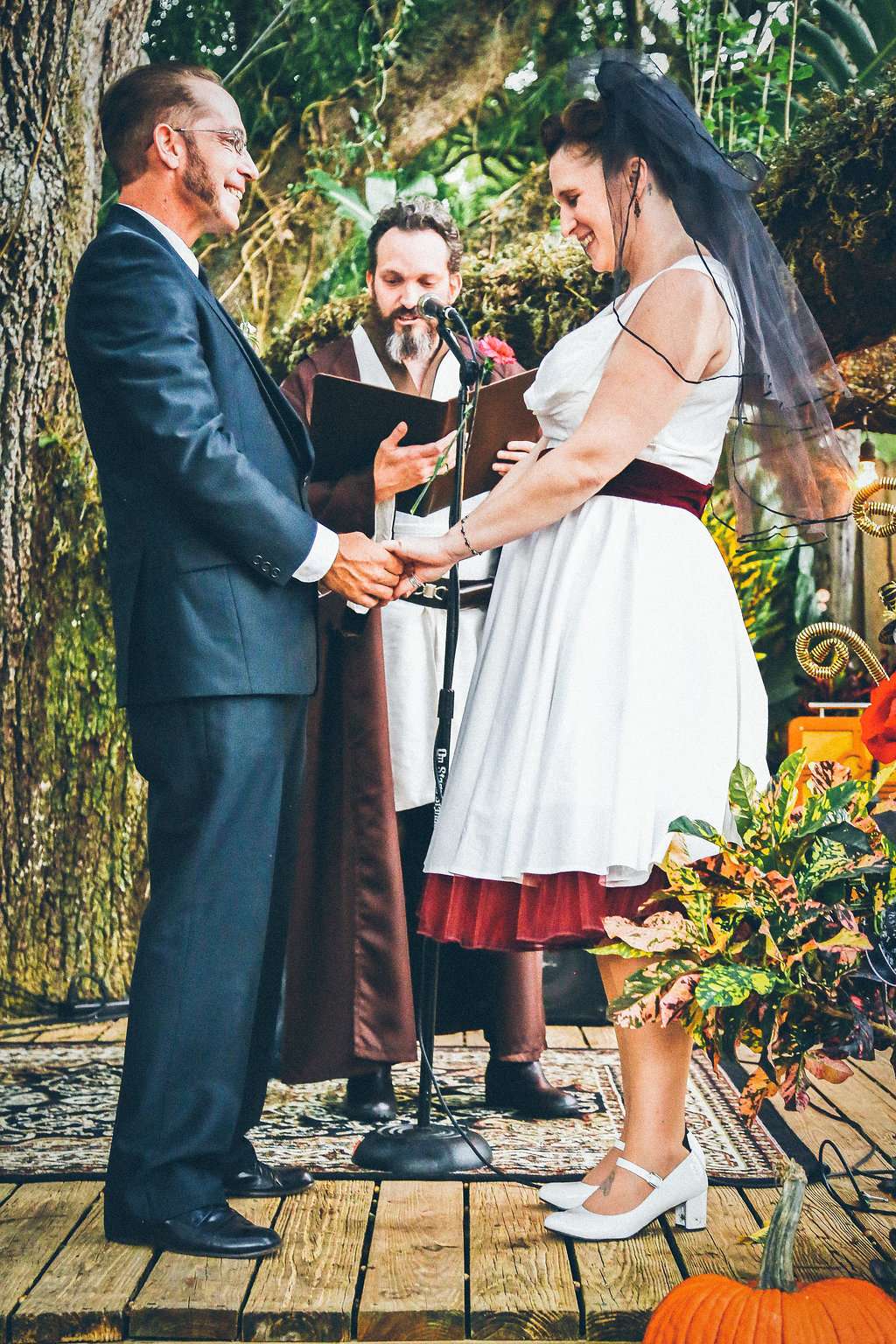 Their ceremony was conducted by a family member, and was suitably ‘weird’! “I walked down the aisle to the Indiana Jones theme, I made it about half way before cracking up. My brother-in-law, Stuart, was ordained online and preformed the ceremony in his Jedi robes! He also wrote the ceremony. We told him to keep it weird and he obliged, opening with a brief history of homo-sapiens and their rise to power through unity and ending with the mathematically increasing odds that we will be swallowed up by a sinkhole.” 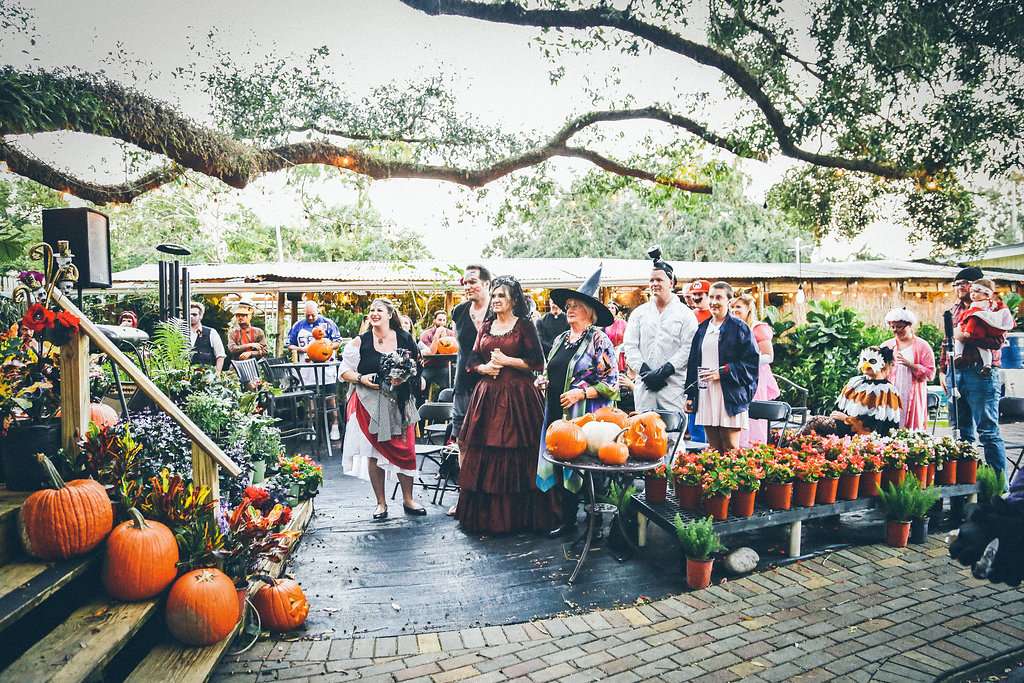 “Our favourite lines were about our pets: ‘They enter this union with a loving cat named Tuesday, and a suspicious, mistrustful rabbit named Thunder, both of whom doubtlessly view these proceedings with studied indifference, or possibly even resentment.’ We realised too late that we hadn’t practised the exchanging of rings but everyone had a great laugh when we screwed that up, Stuart exclaimed ‘You had one job!’” 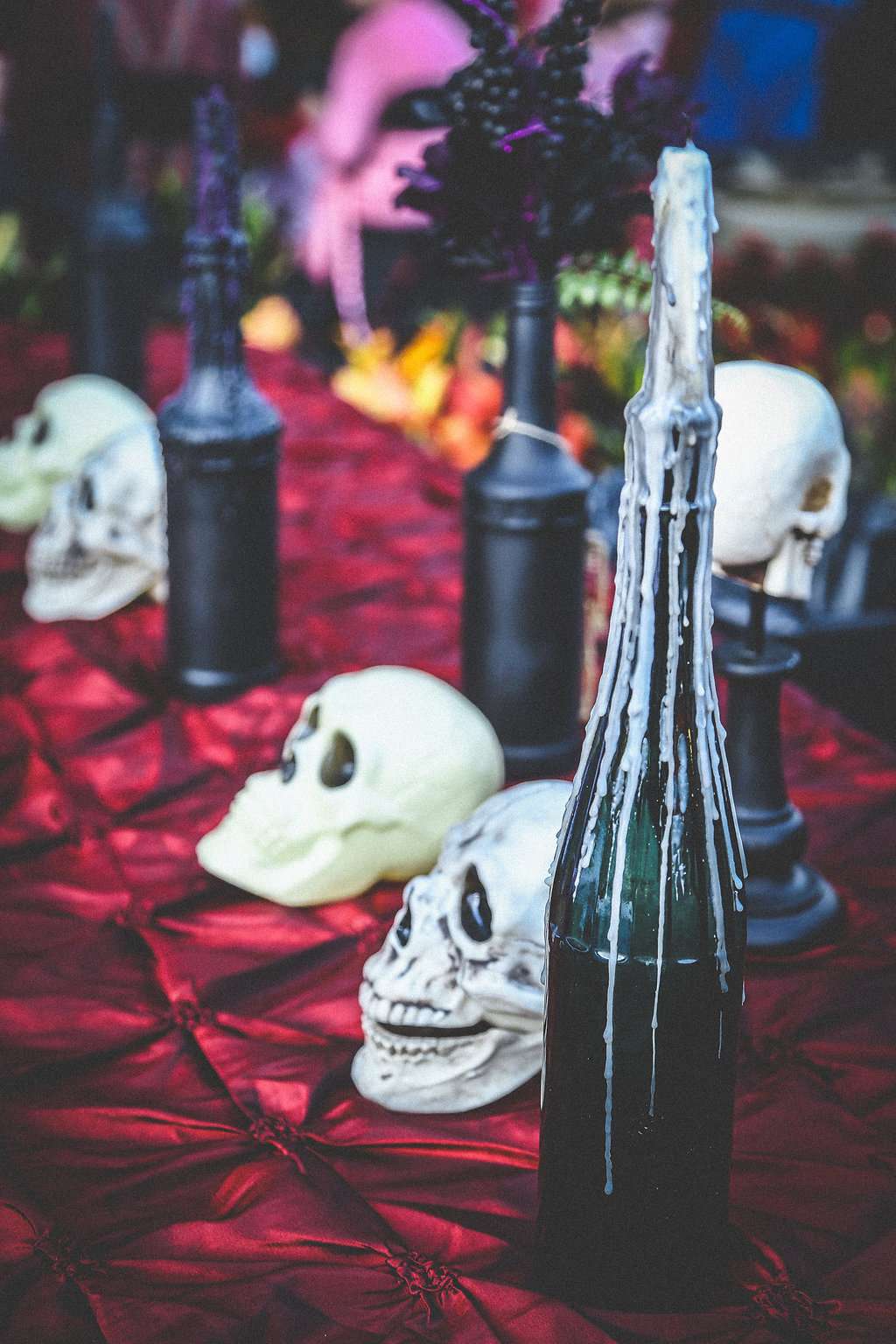 Most of their decorations were DIY, with some from previous Halloweens. “Two of my close friends got together and made centrepieces for us by painting bottles black and hanging mini skeletons on them. The night of Drew’s bachelor party I stayed home, drank some wine and splattered ‘blood’ on our white tablecloths. My bouquet was made of creepy craft store flowers and instead of a rehearsal dinner we invited our families over to carve pumpkins and displayed them around the garden too. The pumpkin carving party was amazing but left us with little time for planning travel logistics the next day. In hindsight we wish we’d asked for more help and realised that people actually do want to help and that we would need it! We ended up scrambling a bit at the end, trying to get everything to and from the venue.” 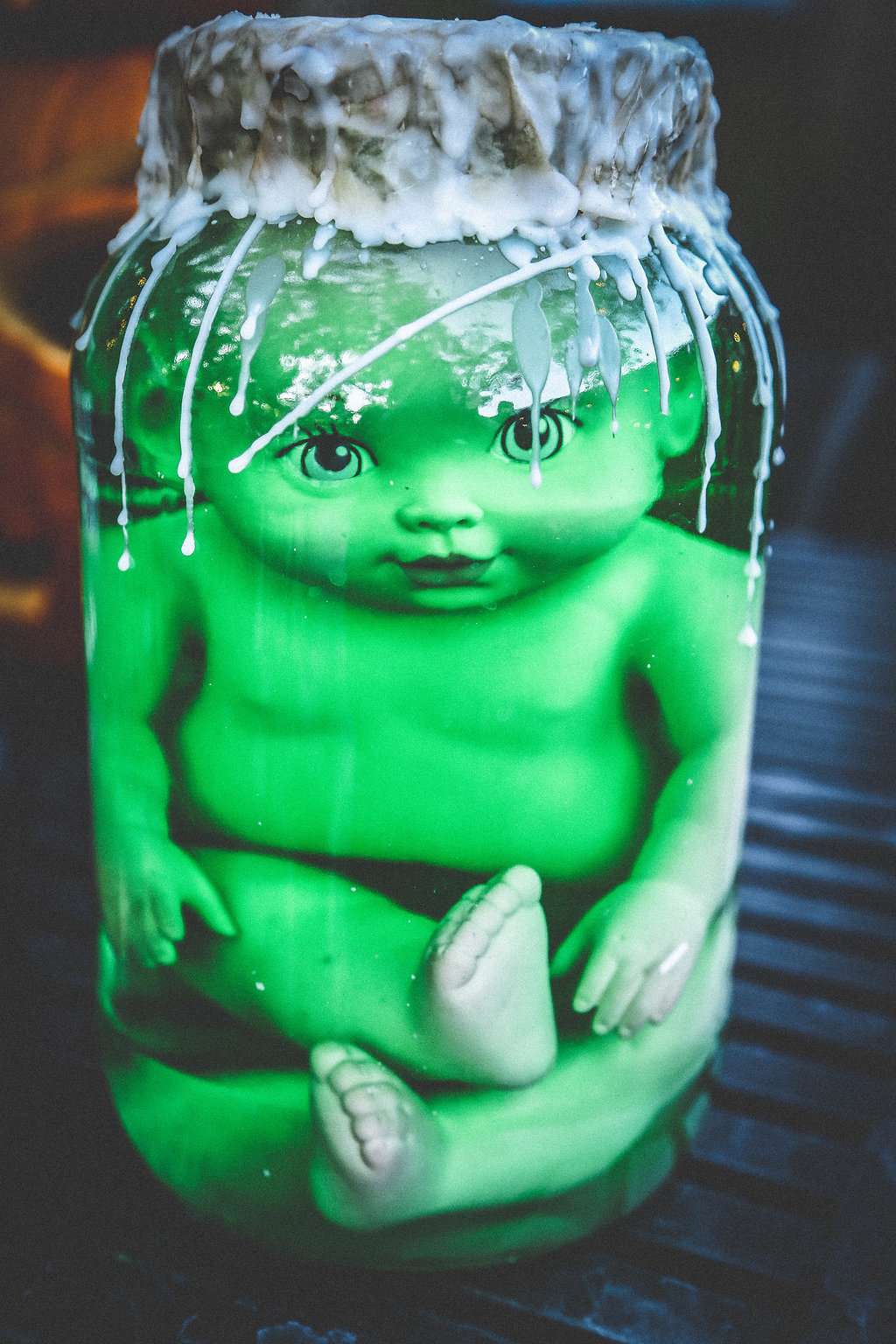 In total they spent $7000 and their biggest expense was their photographer. However they managed to save money in almost every other area. “We were really lucky because we found a way around a lot of big things that can usually be expensive”, she said. “For example, our venue was where Drew works, which just also happens to be a beautiful plant nursery run by awesome people that gave us a great deal. The food was catered by friends and we did a tacos and light snacks, and I baked our wedding cake!  We also saved on alcohol by keeping it to beer and wine, comparing prices, using coupons and shopping in the sales for months!”

“It really came down to what was important enough to splurge on, and for us that was the photographer. We don’t have a lot of pictures together and even though it was a Halloween wedding we wanted some photos of us being stupid in love!” 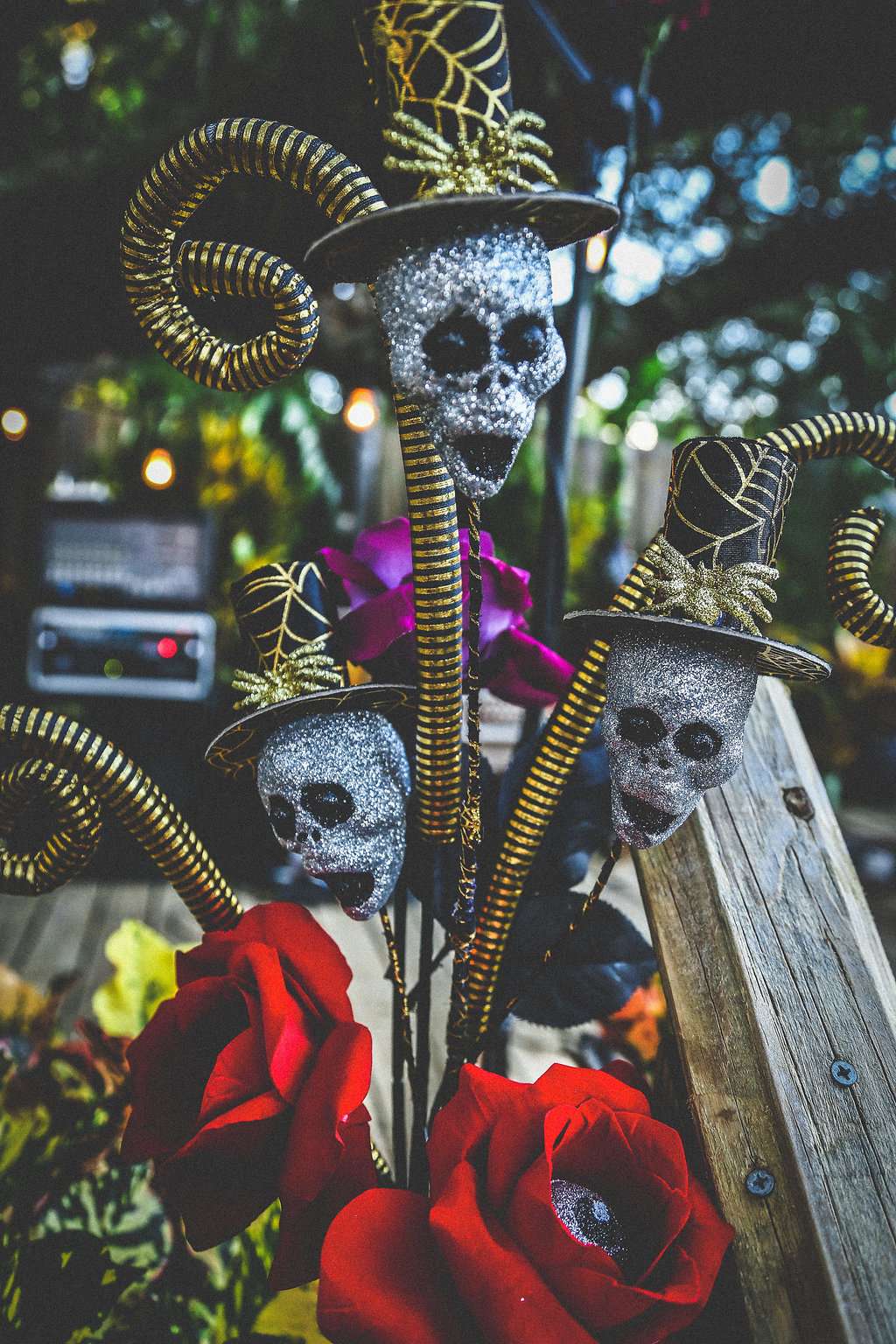 “Our advice for future brides and grooms is that at a certain point something will go wrong”, she concluded. “It might be small, it might be huge, but just go with it. If you want to walk yourself down the aisle – do it, if you want to serve tacos and seaweed salad – do it. Don’t throw a garter if you don’t want to, don’t let anybody tell you how your wedding is ‘supposed to be.’ The end result of our wedding was so perfect, we wouldn’t change a thing.” 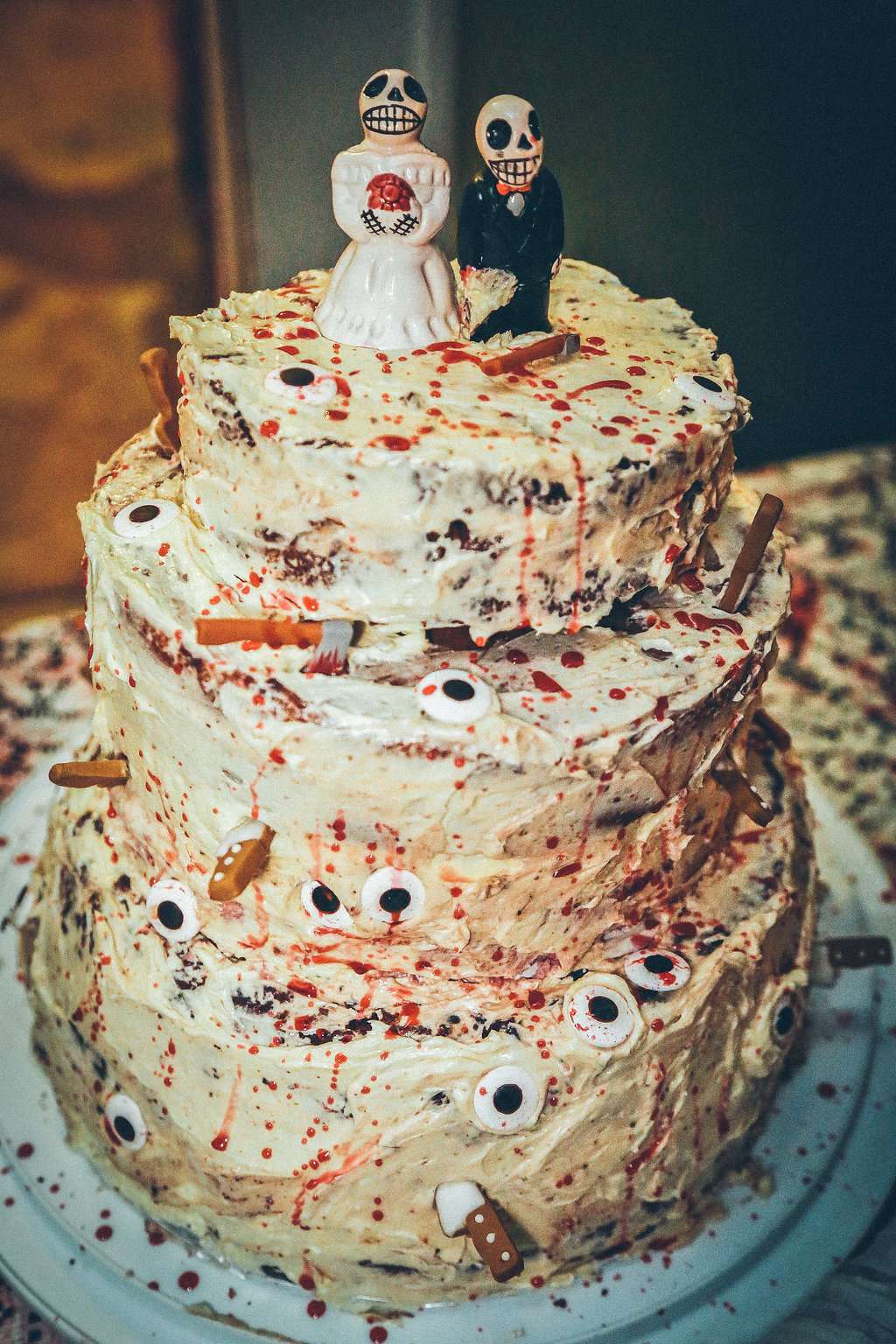 “All of our friends and family are so talented, at the end of it all we’re extremely humbled, grateful and in awe of how much they gave and did. The fun Halloween party we planned, to celebrate our love turned into a kick ass Halloween blowout that celebrated the love we have for everyone there.” 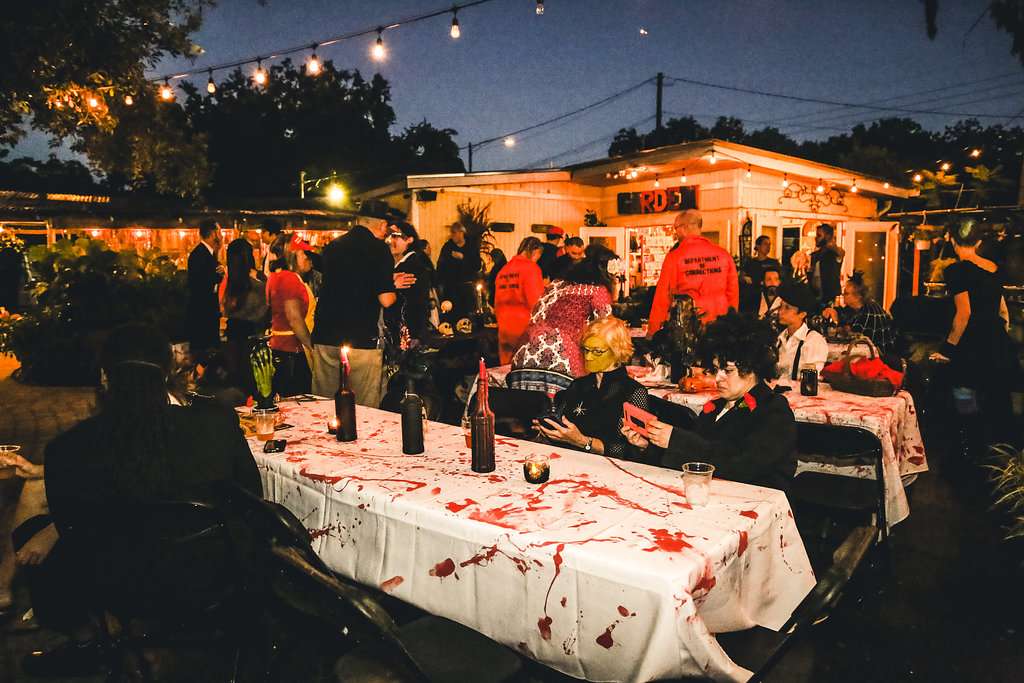 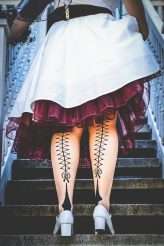 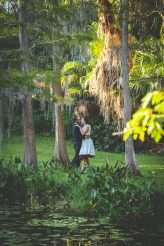 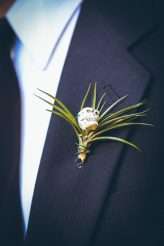 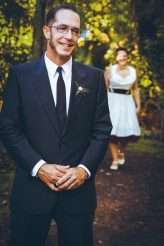 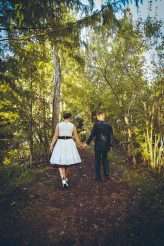 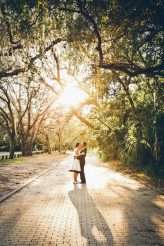 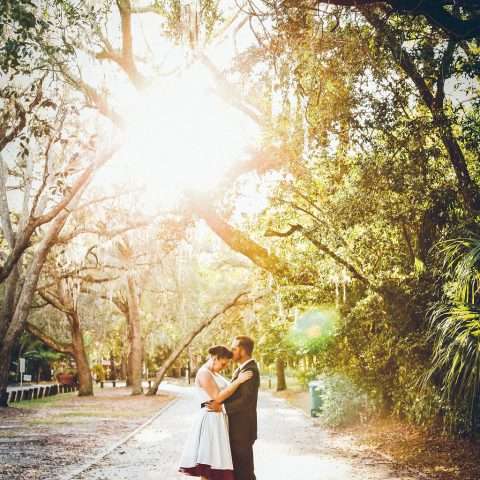 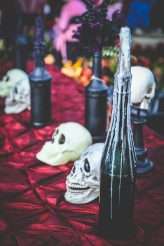 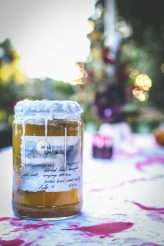 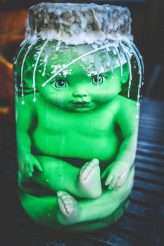 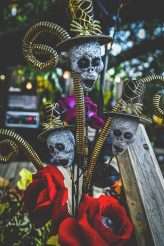 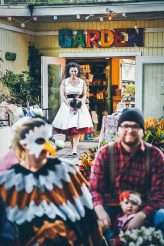 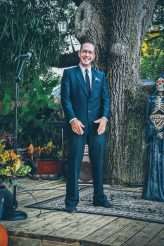 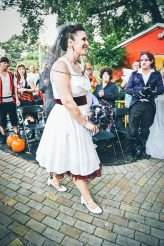 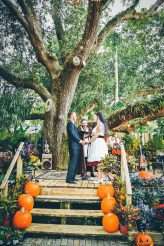 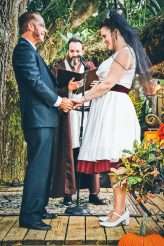 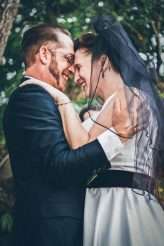 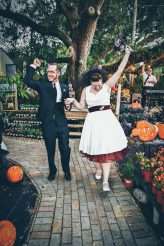 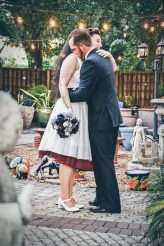 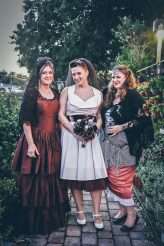 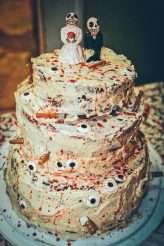 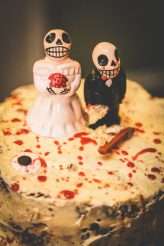 We feature a lot of Friday the 13th and Halloween weddings on Rock n Roll Bride (and we love them!) but Alexis and Jeff took it to the NEXT LEVEL with their DIY Halloween themed wedding, where they were made up as Frankenstein's monster and his bride. Yep, you read that right.

Day of the Dead Wedding on Halloween

Although they got married on Halloween, Charlie and Chris decided they wanted their wedding to have a different feel to most themed Halloween weddings. With the groom's father being from South America, a Day of the Dead theme made way more sense. "Chris’ dad is South American and he’s always loved day of the dead", explained the bride. "We both absolutely love autumn with all its vibrant copper tones and Halloween is our favourite holiday. We always celebrate it in a big way so it was an obvious choice for our wedding. We also wanted the whole thing to reflect my heritage too so the Asian influence throughout our venue, The Matara Centre, was really important."

Yes, that's right, Lizzy and Emma's wedding was themed around Halloween and rainbows! It doesn't get any better than that, right!? The couple were married on October 31st (when else?) at The Red Barn in Blindley Heath, Surrey.