The day began with an intimate, humanist ceremony. “Neither of us are religious and it was really important that we had a simple yet meaningful ceremony, with a dash of humour thrown in”, began the bride. “We wanted to trim out all of the fluff, so no songs or readings – just the two of us declaring our love for one another.” 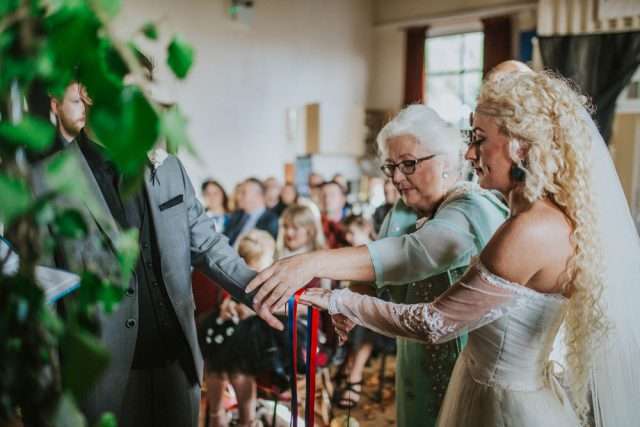 “My mum walked me down the aisle to a song that Sam and I call ours, Tears for Fears, Head Over Heels. We wanted our vows to be unique to us and reflect the way we love each other, so we wrote them. We both cried the whole way through. We exchanged rings but incorporated the Pagan tradition of handfasting. It was really nice to include an old ritual and I spent quite a while studying the meaning behind each colour of ribbon and assigning it to who I thought that best represented.” 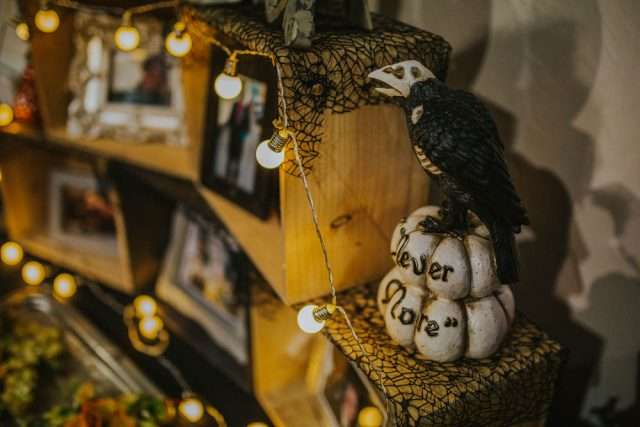 The reception space was decorated by the couple themselves. They did lots of DIY and incorporated so many things to suit their spooky theme. “There were a lot of skulls and ravens placed around the room and jumping zombie hand”, the bride continued. “We had munchkin pumpkins on the tables and we scattered dried leaves along the aisle. We also wanted to subtly add our love of books, in particular Edgar Allan Poe, so we framed some Poe quotes and used the pages of books as confetti. The aim was to make the room look like a woodland scene, with little horrors lurking in every corner.” 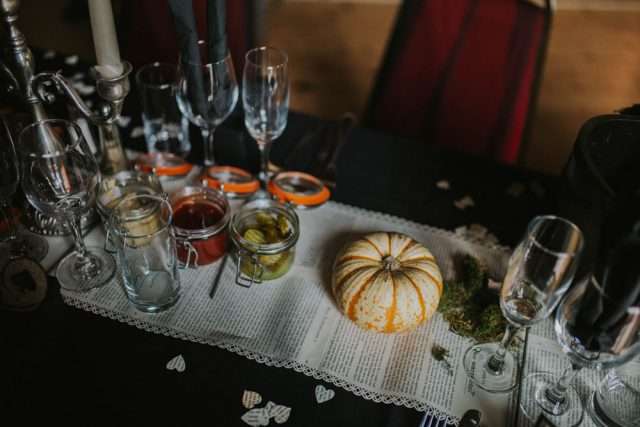 “The tables were set out in a banquet style, all joined together so that everyone felt connected and we ate by candlelight. We had a cemetery theme running through the dinner, with gravestones as table numbers, coffins as favour boxes and moss and other foliage sprinkled around. In the favour boxes, we gave out personalised candles, personalised badges and temporary tattoos. We included the pentagram symbol in several things throughout the wedding as a symbol of protection and unity.” 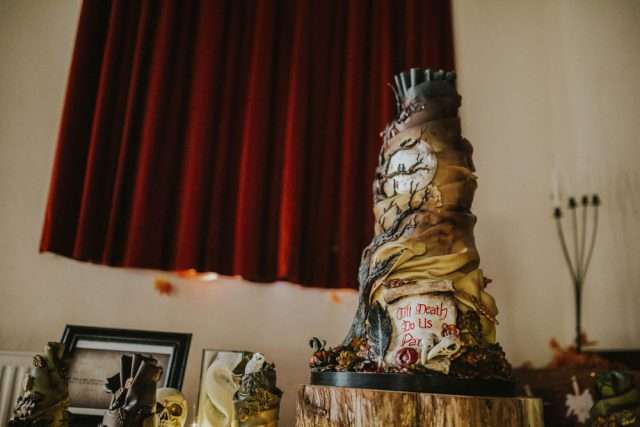 “We saved money on decorations by going to car boot sales and scouring the internet. I bought a lot of stuff from eBay and Etsy and found ideas on Pinterest to make my own. I was really lucky to have my mum’s help, she makes her own cards, jewellery and other trinkets so had amazing ideas. We also saved a lot of money on the dress, buying it as a sample then having it hand altered by a seamstress – it ended up costing less than half its original price. We spent money on things that were important and would make our wedding unique, like the cake. This was a large spend, especially considering we weren’t going to have one but it was so worth it!” 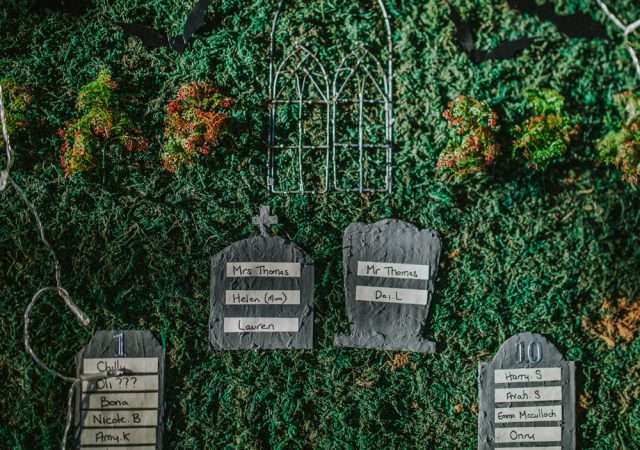 A funny moment from the day was when Sam surprised Morgan with a tattoo he’d gotten to celebrate their marriage! “In evening Sam grabbed me off the dance floor saying he had something to show me. I was pretty nervous, I thought something had gone horribly wrong. When we got to the ‘quiet room’ at the back of the hall, he rolled up his trouser leg and revealed a very fresh tattoo of Papa Lazarou from the League of Gentlemen with his famous quote ‘You’re my wife now!’ I was in stitches. It’s something we say to each other all the time and is of course our favourite episode from the show. I’d even written it on our ‘order of the day’ board. It was such a Sam thing to do.” 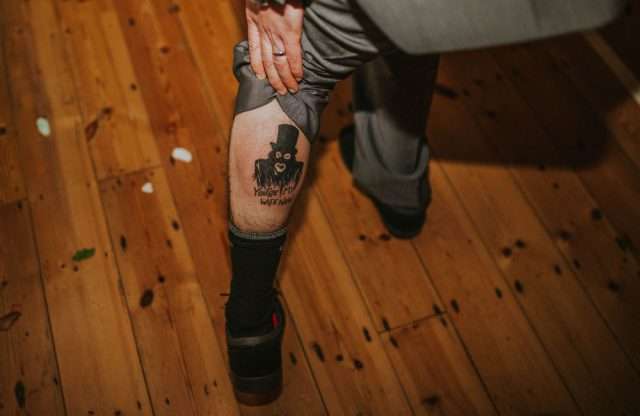 “We found that during the lead up to the wedding, a few people pushed their opinions onto us about how they thought we should do certain things or how they would do it”, Morgan concluded. “However we stuck to our guns and stayed on the path that we had chosen. We didn’t do everything conventionally, but we did it the way we wanted it. It was really important to us to have our day exactly as we had chosen and we’re glad we did because we made it a reflection of us. I’d say throw away the rule book and have your wedding as your envisage it, make it fun and lighthearted and most important just focus on why you’re getting married in the first place. Be weird, be unconventional, just enjoy!” 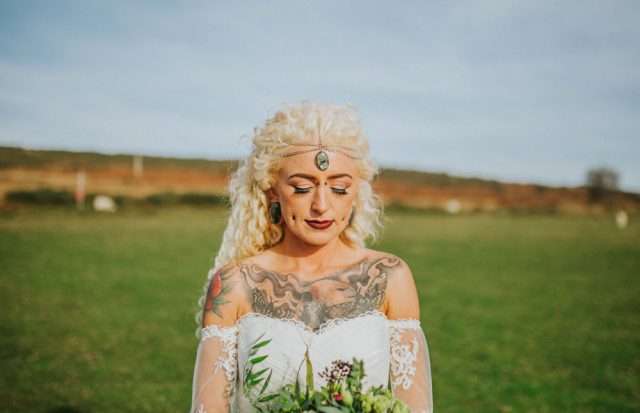 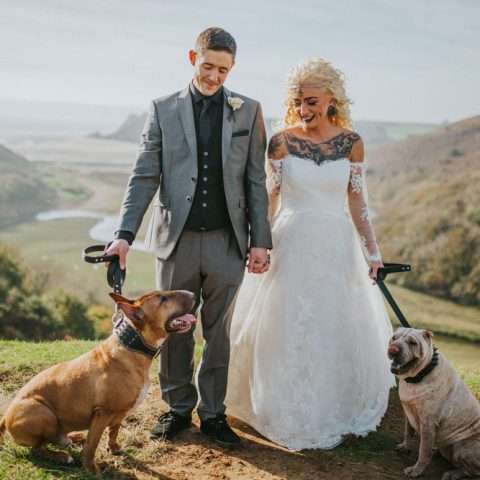