Jenny and Orey, from Dublin, wanted to have a relaxed and “no frills” wedding, where they could just have fun, be themselves and have the type of get together they like to attend.

“All the weddings we’ve attended in the last couple of years have been church or hotel weddings,” began Jenny, “so we wanted to break away from that formality and do it our own way. We also had three venues which meant our guests were able to wander around the city all day. Thankfully we got the weather for it and everyone seemed to enjoy not being confined to one place for the entire time.” 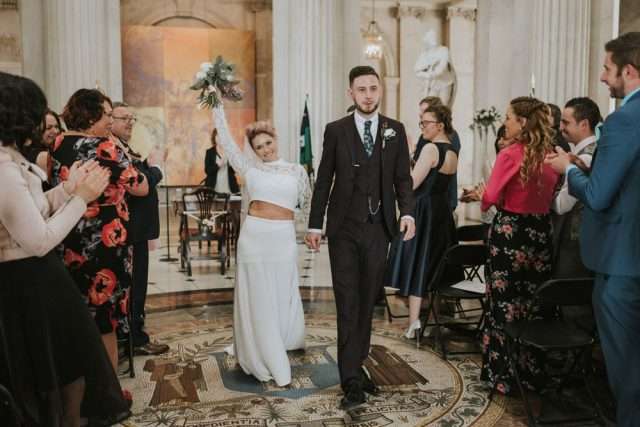 Jenny actually forgot her bouquet on the way to the ceremony and didn’t realise until she was five minutes from the venue! “We had to make a pit stop to a local florist on the way and my dad had to jump out and get me a bouquet made there and then!” she laughed. “The driver wasn’t happy as he was late for the next job and my dad was going crazy because the guy in the florist wasn’t following his very specific arrangement instructions (more pink, less green!) He was worried I was going to have to walk down the aisle behind a bush! The florist owner was lovely though and gave him the bouquet half price. I never got to use the bouquet my poor aunt had been making for me.” 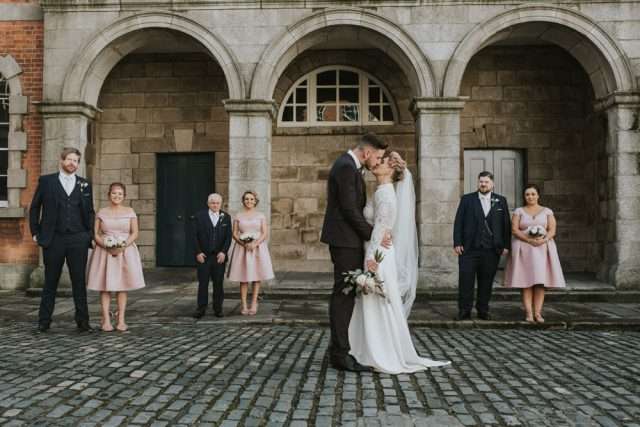 Their ceremony was held in City Hall, one of the most beautiful buildings in Dublin. “We didn’t want to get married in a church but still wanted that wow factor and sense of occasion that a church can have. Most of our guests had never even been inside it and were pleasantly surprised. They thought we were getting married in a registry office! We had some lovely personal readings read by family and friends and there were even a few laughs.” 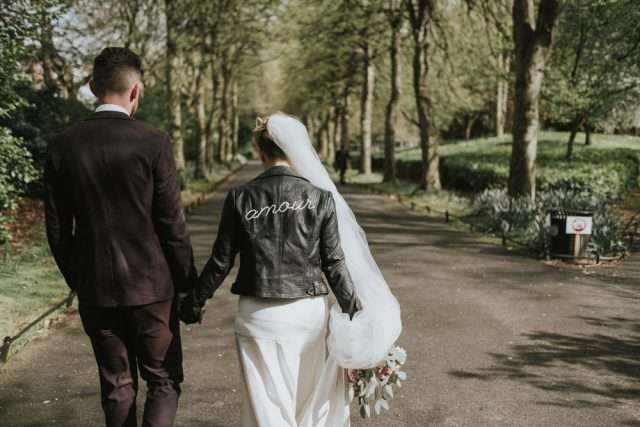 Jenny’s mum made their invitations, her aunt made the bouquets (although Jenny forgot hers!) and Jenny made their wedding cake herself. “I wouldn’t recommend it though it took days to make the five tiers and it broke my heart. I have experience making cakes but with everything else going on I just couldn’t give it the love and care it deserved. I didn’t even get to eat any of it and ended up leaving it at the venue!.” 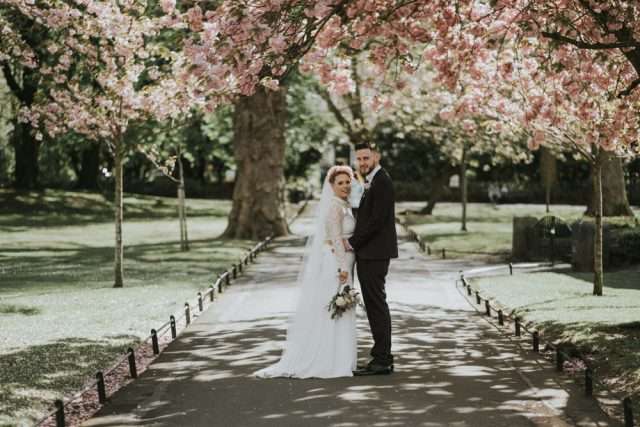 They didn’t have a favourite part, as they genuinely loved the whole day. “We just loved every minute. I thought I might find it a bit uncomfortable being the centre of attention but it wasn’t like that at all. We loved getting to chat to everyone who came, eating really good food and dancing all night!” 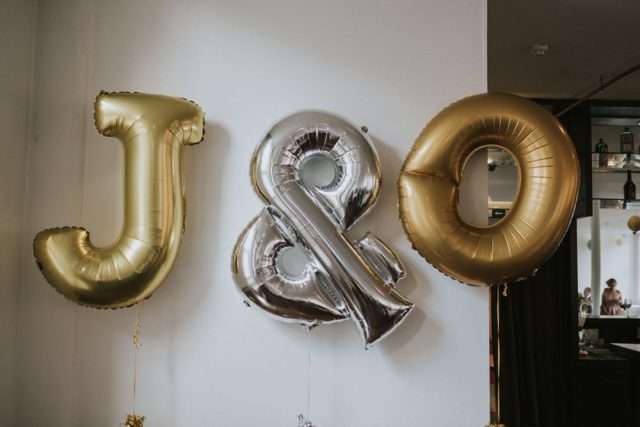 They spent the most money on photography and food. “Both were so worth it”, she explained. “We had a tapas style dinner where sharing pots and plates were brought to each table and guests could help themselves… there was so much food! Also, because we didn’t have a package wedding everything was priced individually, so all the little things added up. Even budget weddings can get expensive. Trying to save the money is hard! It’s all worth it in the end but it definitely brings a stress of its own.” 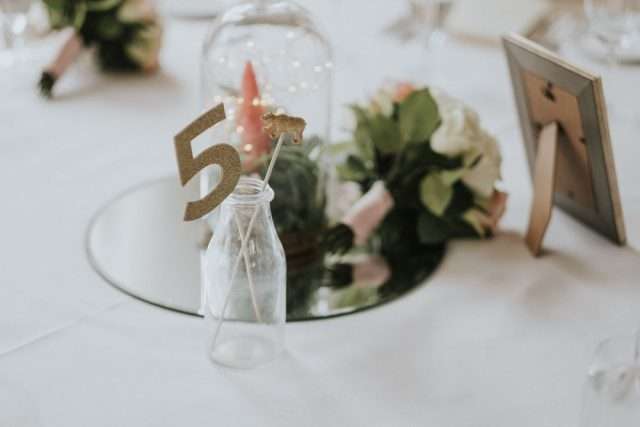 “However we really saved money on our wedding outfits. I bought mine on ASOS and Pepper Mayo for under €100 and my shoes were on sale in Office. Orey got his suit in the Ted Baker outlet shop in Kildare Village for about €300 (which was like a third of the price a Ted Baker suit normally is!) He had eyed up the suit previously at full price but we couldn’t afford it and it had just arrived in the outlet store the day before we went there, so we got really lucky!” 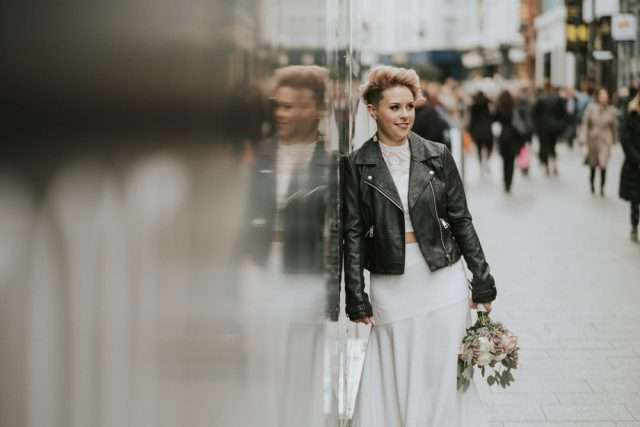 “To be honest, we didn’t really enjoy the planning process, but we loved seeing it all come together in the end”, she concluded. “Our minds were occupied constantly by ‘wedding stuff’ and there was so much running around during the last couple of weeks. We barely had a chance to see each other in the run up. However, in retrospect we wouldn’t have done anything differently as it was a fantastic day!” 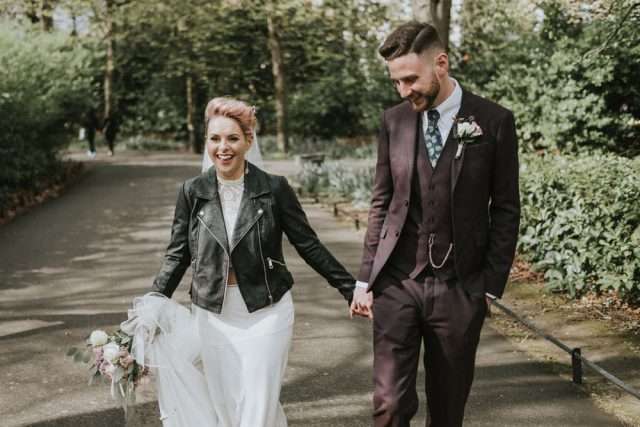 “Our advice for future brides and grooms is don’t go too crazy on extra entertainment and DIY projects. It’s not a show, you are getting married to the person you love with all your friends and family in the one place to support and love you and be part of your happiness. Everyone always says ‘take time to enjoy it, it goes so fast’ and it does. But I can honestly say I enjoyed every minute because I wasn’t worrying if all the extras were going to plan or that I was missing out on things because I was stuck talking to people. Forget the extras and be in the moment!” 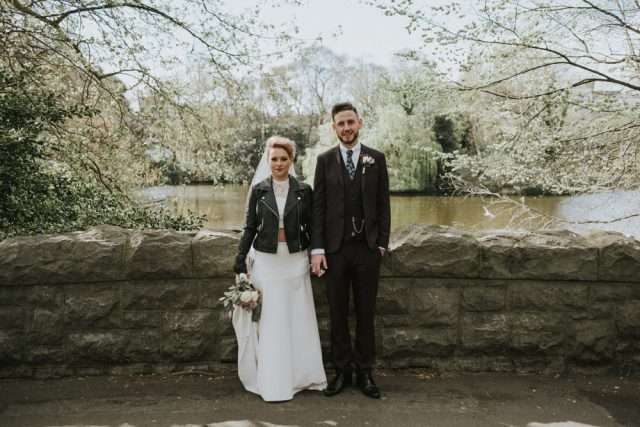 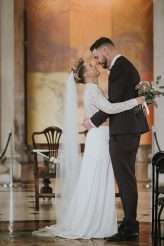 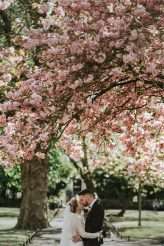