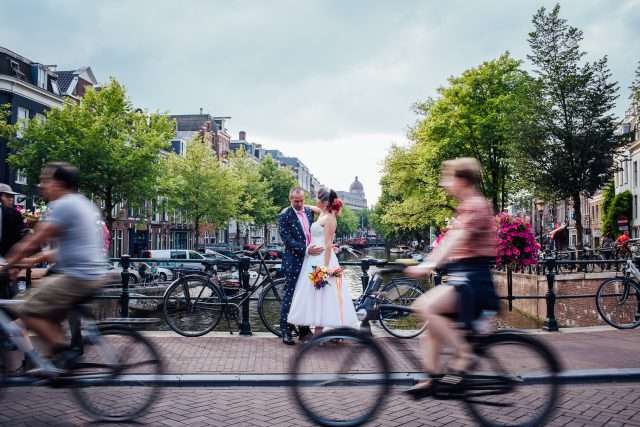 Michelle and Chris got engaged in Amsterdam so this is where they chose to get married too. They didn’t want any of the usual traditions like speeches or a first dance, they just wanted to have a colourful party with everyone who meant a lot to to them. As the couple weren’t allowed to legally marry in Holland, they later had a second wedding back home in in Kingston afterwards. 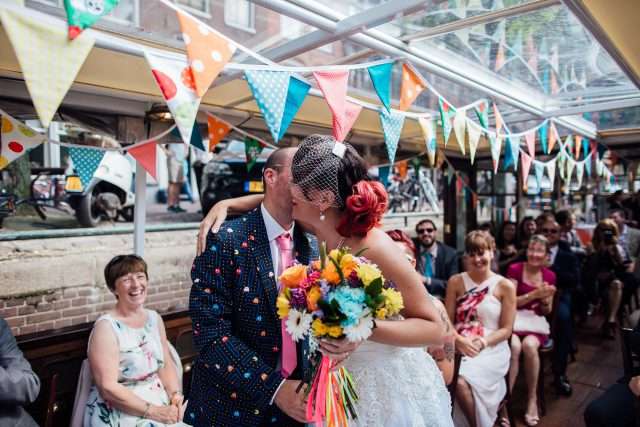 “There was a sweepstake as to where the wedding would be,” began Michelle, “as Chris is really into snowboarding and I’m half Dutch but grew up in Spain. So it was a toss up between Spain, Holland or somewhere with snow! However it turned out Chris really wanted to get married on a boat! We wanted our wedding to be colourful and just did what we wanted. Having been to a few weddings before, we knew what we didn’t want, so it was kind of born from that.” 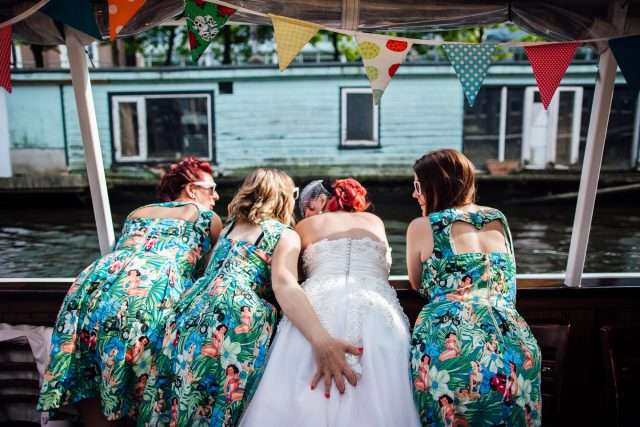 The couple’s wedding ceremony took place on a boat on the canals of Amsterdam. “I had been teasing Chris that I was going to walk down the aisle to either Kate Nash, the Ting Tings or Florence and the Machine as he HATES them. I made a mash up of three of each that played before the ‘real’ aisle song. Chris thought that it was a mistake! I walked down the very narrow aisle by myself to Tuyo by Rodrigo Amarante, the theme tune to Narcos. Stuart, Chris’ brother, married us using the famous speech from The Princess Bride. All this was happening while the boat took us for a two hour tour around the canals of Amsterdam. Our favourite part of the wedding was the ceremony on the boat, and also dancing all night!” 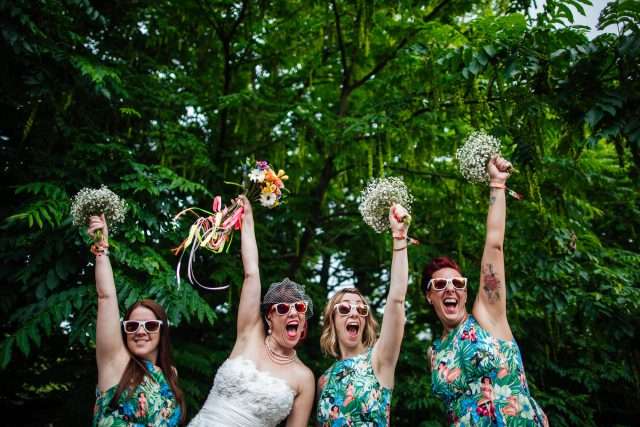 Afterwards, they hosted a big party at Blauwe Theehuis, a cafe in a public park in the middle of the city. The couple did as many DIY decor projects as possible. “I’m a graphic designer and art school graduate so it was to be expected! We made all the bunting and cake table decorations, dyed tablecloths for the boat, made cake toppers for all the cakes, designed wristbands and screen printed all the invites, and created our wedding website. I also helped bead all the individual applique pieces for my dress that my Mum was making.” 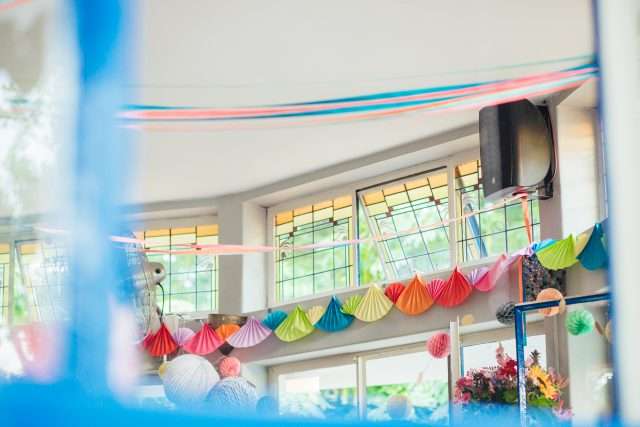 “We had three cakes made: One was my mum’s famous Dutch apple cake, one was a traditional Dutch Cherry vlaai, and the main cake was made by my mum’s best friend, Janet who runs a small cake making business. That cake was made in Spain, flown in sections to the UK, then driven to The Hague to be constructed and decorated, then driven to Amsterdam on Janet’s lap!” 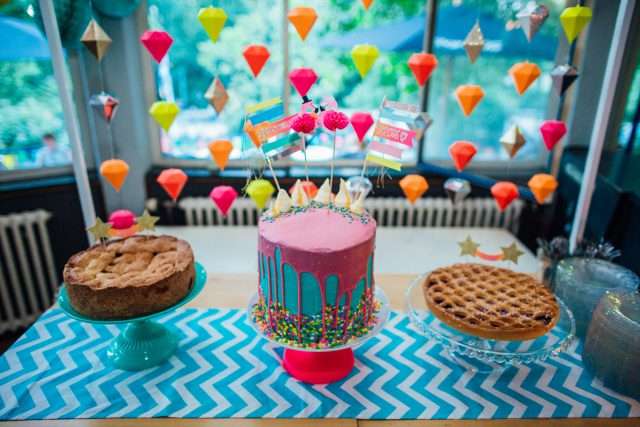 The bride’s mum made her dress and the groom wore a suit covered in a PacMan pattern from Opposuits. “Chris got more attention as the groom than I did as the bride due to his PacMan suit! Michelle laughed. “He even for a fist bump from a tourist!”

The couple’s biggest expense was their photographer. “We found Matt on Rock n Roll Bride and flew him out to Amsterdam. It was one of the things we didn’t want to have to compromise on and we’re glad we didn’t! Also our three nights in the Waldorf Astoria was a big expense but it was totally worth it! However we saved money by having our wedding abroad. The only downside was Brexit occurred right before our wedding, which did make some things more expensive than we had originally budgeted for, due to the exchange rate.” 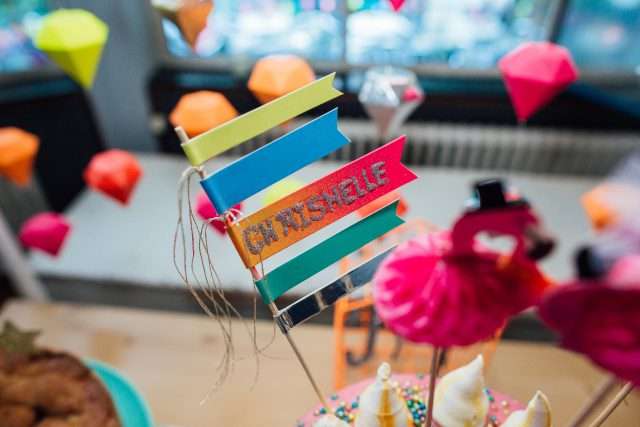 “The best thing about planning our wedding was all the trips out to Amsterdam for ‘research’ and dress trials with my ladies. But the worst thing was trying to find a decent local hair and make up artist and we ended up being ripped off! Seems so much easier finding them in the UK but we couldn’t justify flying them out too. We also accidentally booked a hotel twice didn’t realise until we showed up in Amsterdam!” 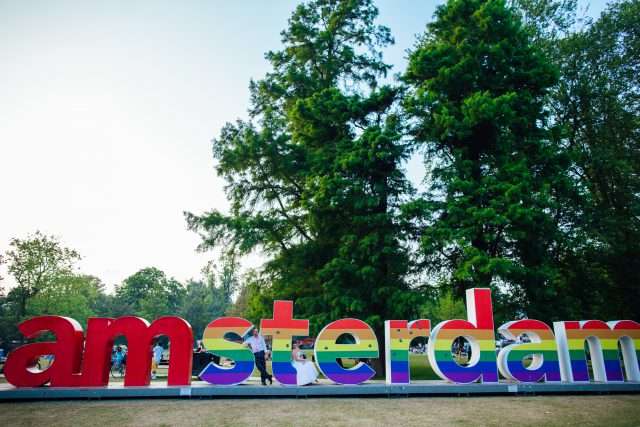 “In retrospect, the things we would have done differently is to not get so caught up in all the small details with regards to decorations and I would have delegated more. I also wish I’d done more research into finding the right hair and make up artist and that I didn’t leave so much to the last minute as it was very stressful at the end! So our advice for future brides and grooms is don’t sweat the small stuff and don’t leave things to the last minute! Delegate, delegate and delegate some more. Also start early! We had two years to get things sorted and I was still up the night before dying my hair and working on the playlist. I even wrote my vows the morning of the wedding!” 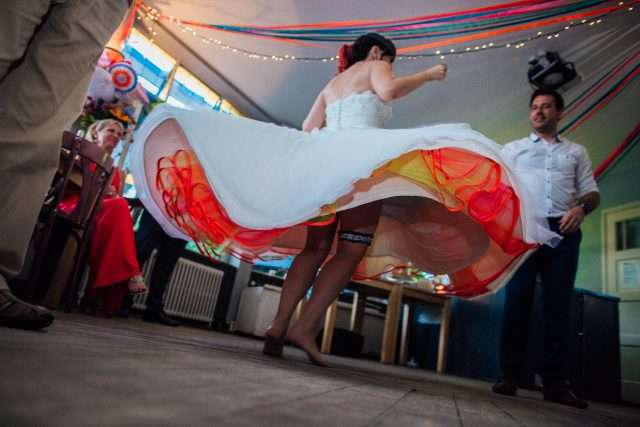