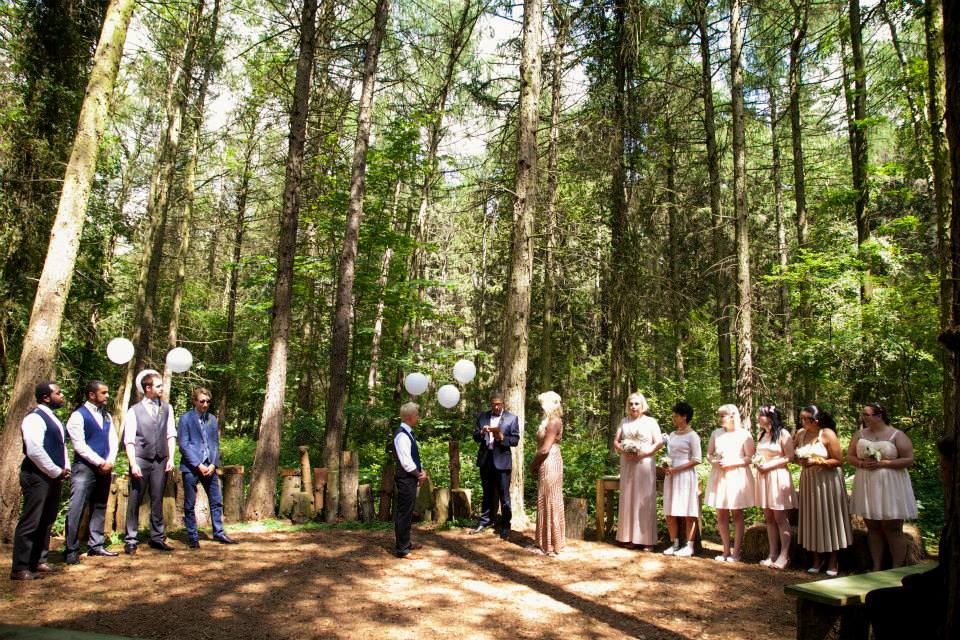 Dara and Vince had a three day wedding, the first being their legal ceremony followed by a woodland blessing and party a couple of days later. Their woodland ceremony was officiated by the bride’s dad. They wanted something chilled out and natural and having a longer event meant their guests could really get to know each other.

“We both have very different styles and tastes so we decided not to stick to any rigid theme”, the bride explained, “but we always knew that we wanted everything to feel very chilled out and natural. I work in a very visual way so I made loads of scrapbooks and Pinterest boards of woodland weddings and rustic, vintage themes that I could show to our vendors but really the venue was already so beautiful that we just tried to work everything around how it looked already.” 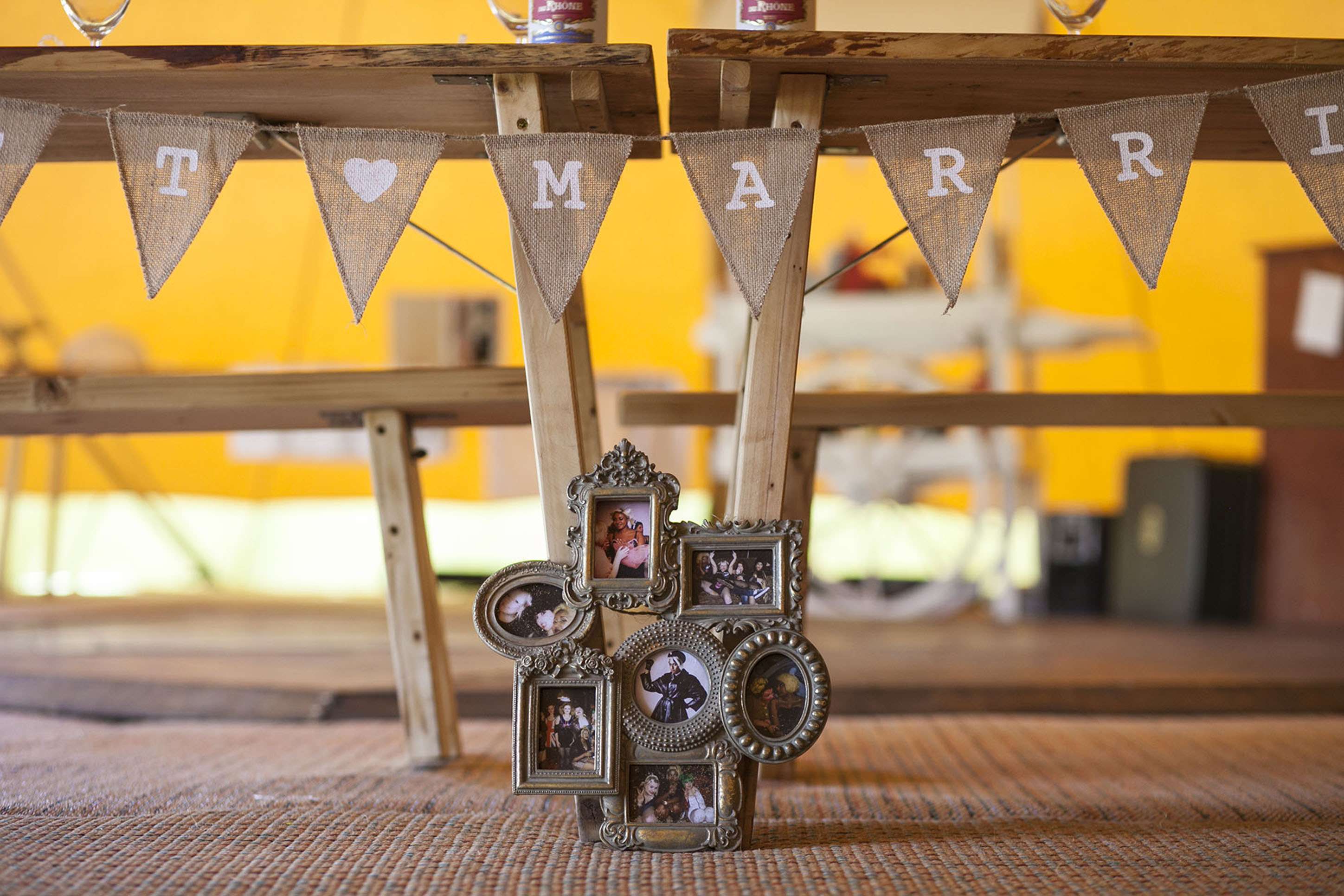 “For our second ceremony we had it on the morning of the second day in Camp Katur’s woodland ceremony area. It was a beautiful day, the sun was shining and everyone was gathered on tree stumps and wooden benches in the ceremony area where Vince was there to greet them. My Dad was our officiant, he is known as a bit of a joker and he has a keen interest in theology without being very religious, which was perfect as we aren’t religious and we wanted to keep everything personal and light-hearted rather than strictly ceremonious.” 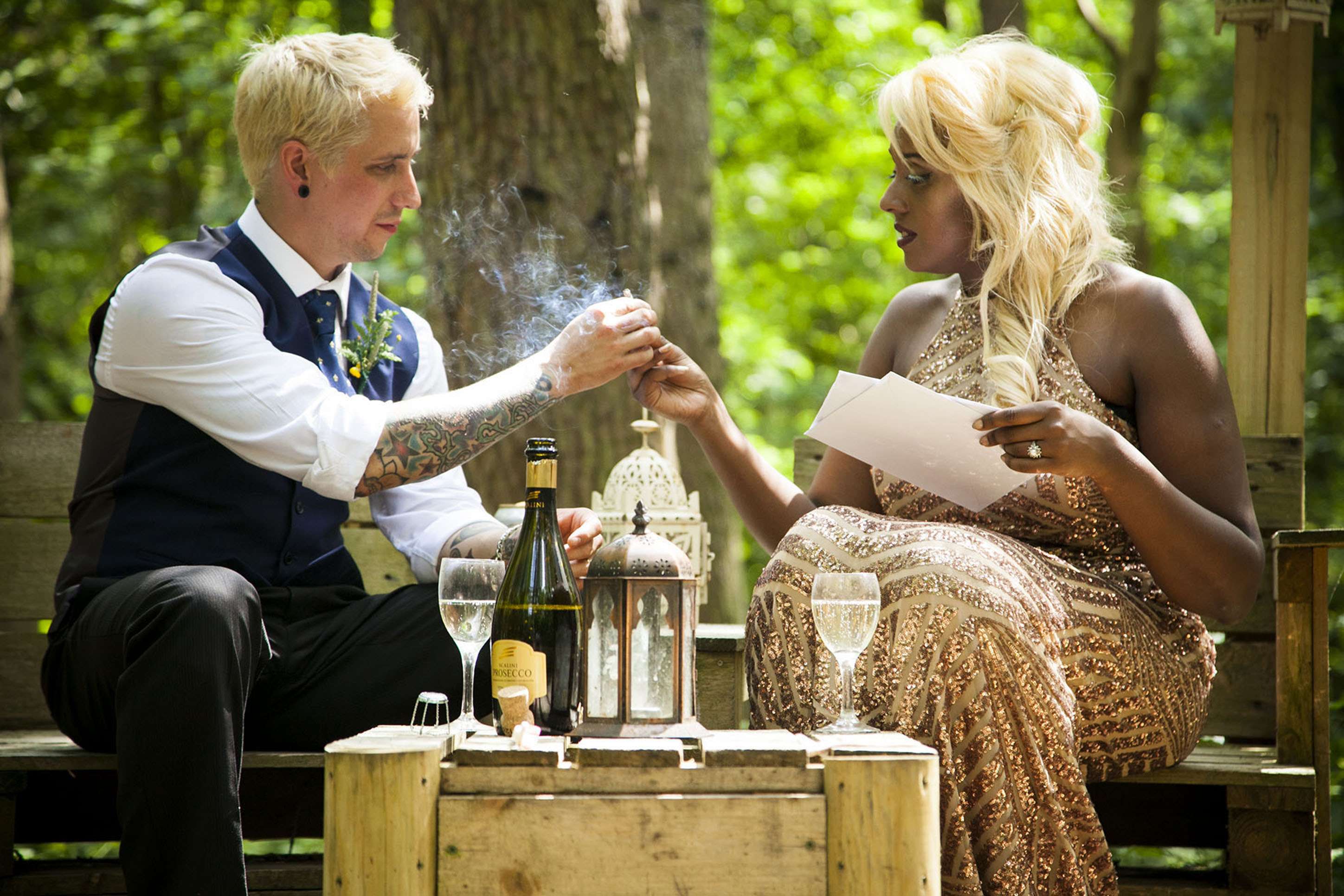 “My little brother walked me down the aisle to Butterfly Culture by Benjamin Francis Leftwich, which I had chosen years ago when me and Vince were on holiday. It was a short ceremony with a lot of jokes, lots of sunshine and a few tears. When everyone entered the ceremony they were given a cone of dried petal confetti that my friends and family had been collecting and drying for a year before the wedding, at the end of the ceremony they all threw the confetti and cheered us on as we walked away through the arch.” 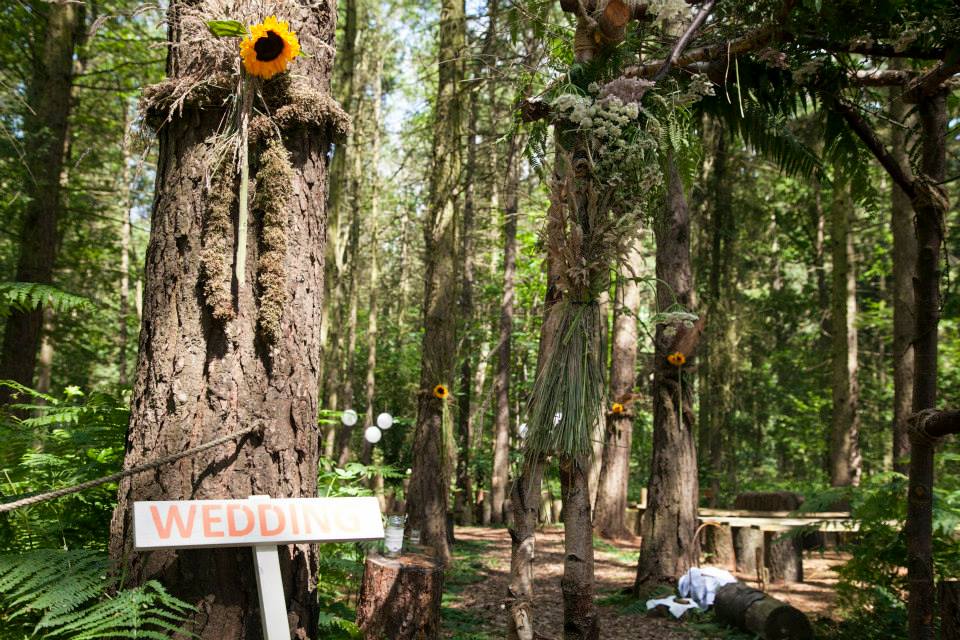 As they were married in the woods they didn’t feel the need to add much extra decoration. This saved money too. “The bouquets were bought from the supermarket on the Thursday before and were arranged by my bridesmaids before the ceremony. The groomsmens’ buttonholes were made from flowers that they picked in the woods! The flowers in the ceremony area were bought from the village supermarket and arranged by a friend and two of our groomsmen as a surprise.” 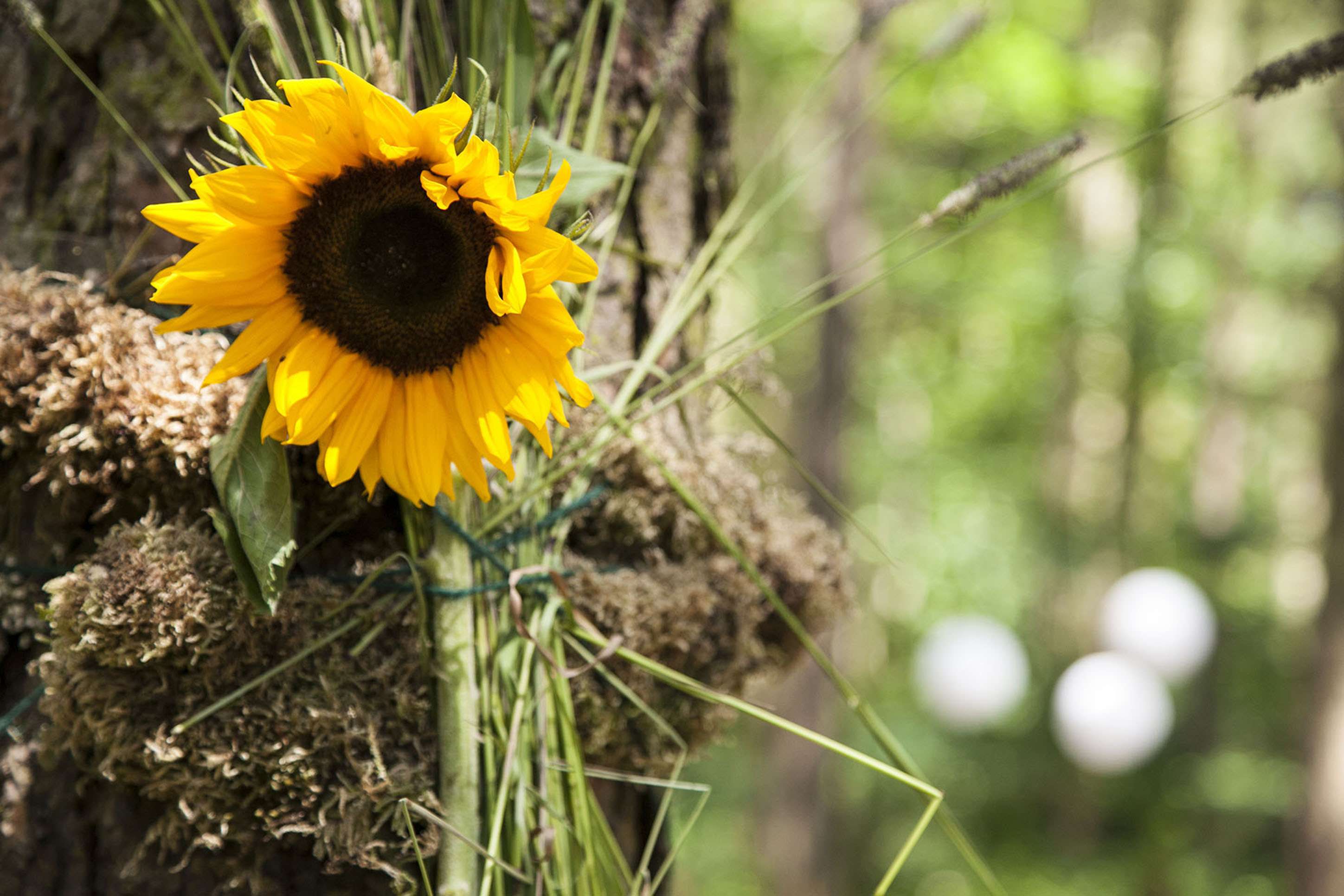 “In the reception space we hung jars of fairy lights and candles in the trees outside which looked beautiful at night. Inside the tipi we hung a sort of washing line with pictures of us pegged on to them. I have collected vintage suitcases for a few years now so I stacked many of them around the tipi full of blankets, toys, spare shoes and other handy things that people might need.” 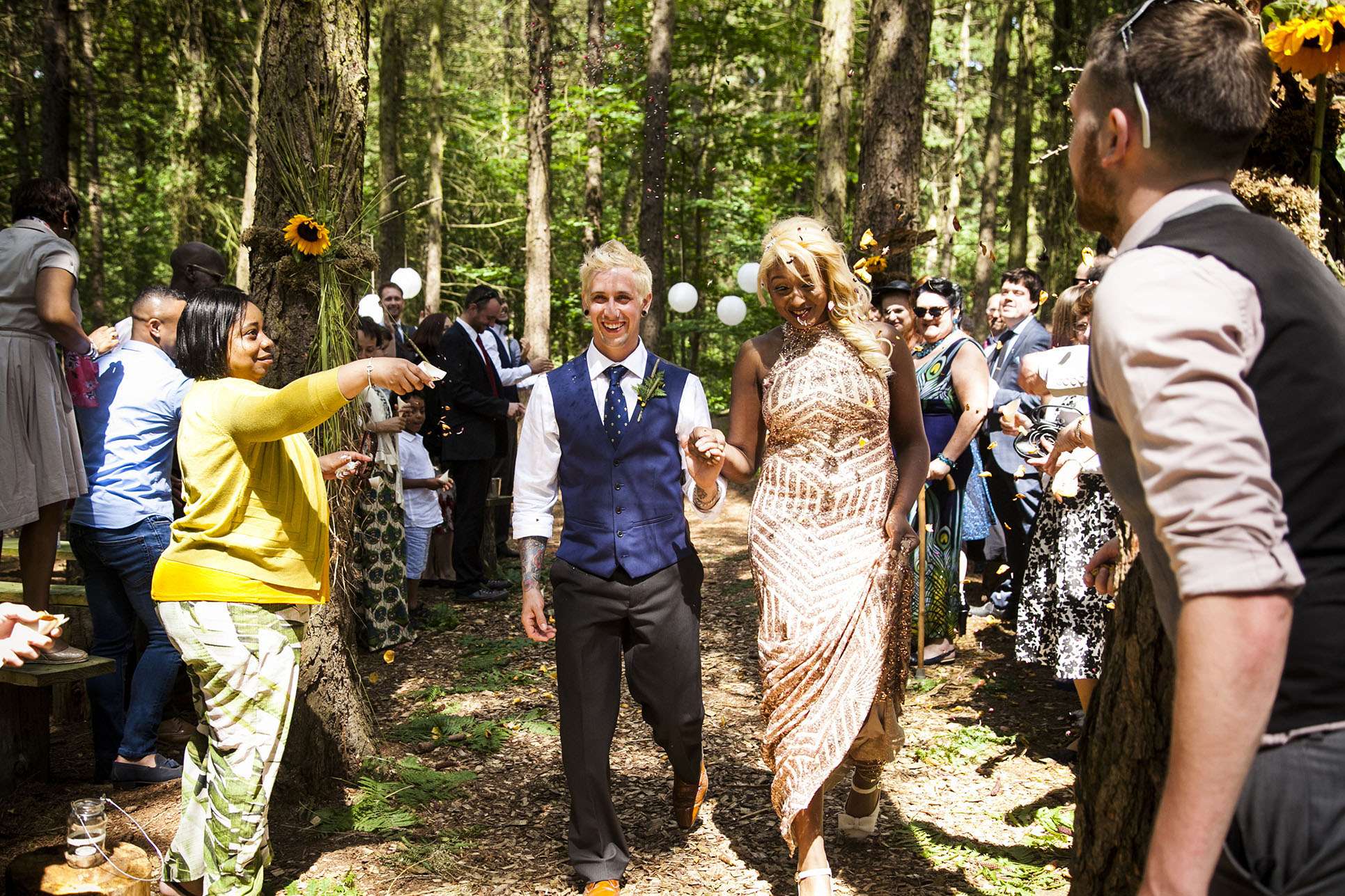 Dara’s incredible rose gold dress came from Ditsy Boutique (unfortunately no longer trading) and cost her just £110! She let her bridesmaids pick their own outfits because she wanted them to be comfortable. “We wanted all our bridesmaids to wear whatever they felt comfortable in and could potentially wear again so we gave them a colour palette, showed them my dress and then they all bought their own dresses and shoes or wore things they already owned. We didn’t have time for a dress rehearsal and my bridesmaids were coming from all over the world so we didn’t actually see everyone’s outfits all together until the ceremony!” 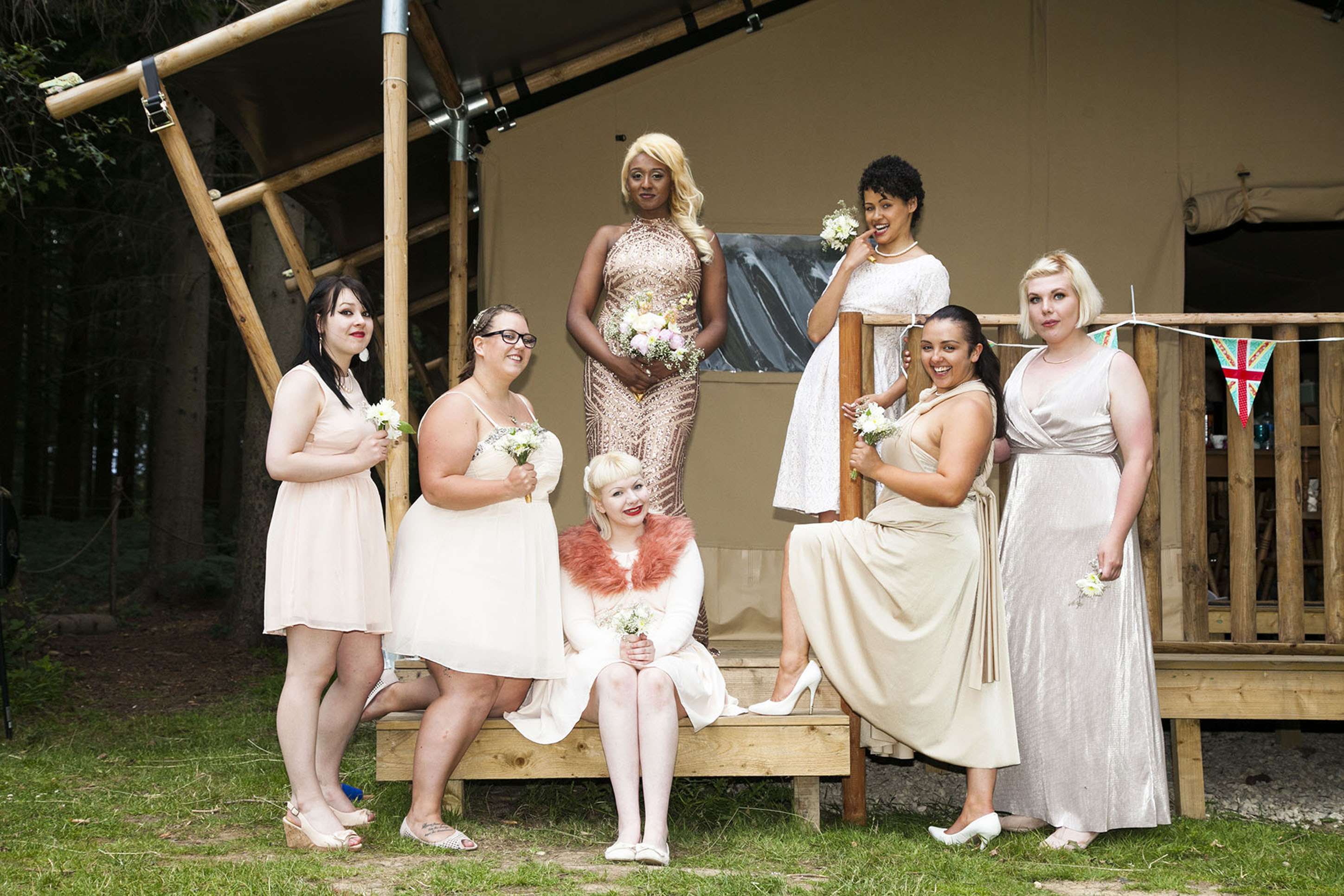 “The best thing about the wedding was seeing how many of our friends and family were always there to lend a hand, give advice or just provide a spare pair of hands when we needed it. We had quite a few operational issues with various aspects of the wedding, I did expect some but there were a few avoidable problems we had that were very stressful. I think my biggest regret was not inviting some people that I really wanted at the wedding. From working in events in the past I knew that not everyone that says they are coming are actually going to turn up, so you can usually afford to invite a few people extra and it’s not the end of the world if you have to pull up a few extra chairs and tables.” 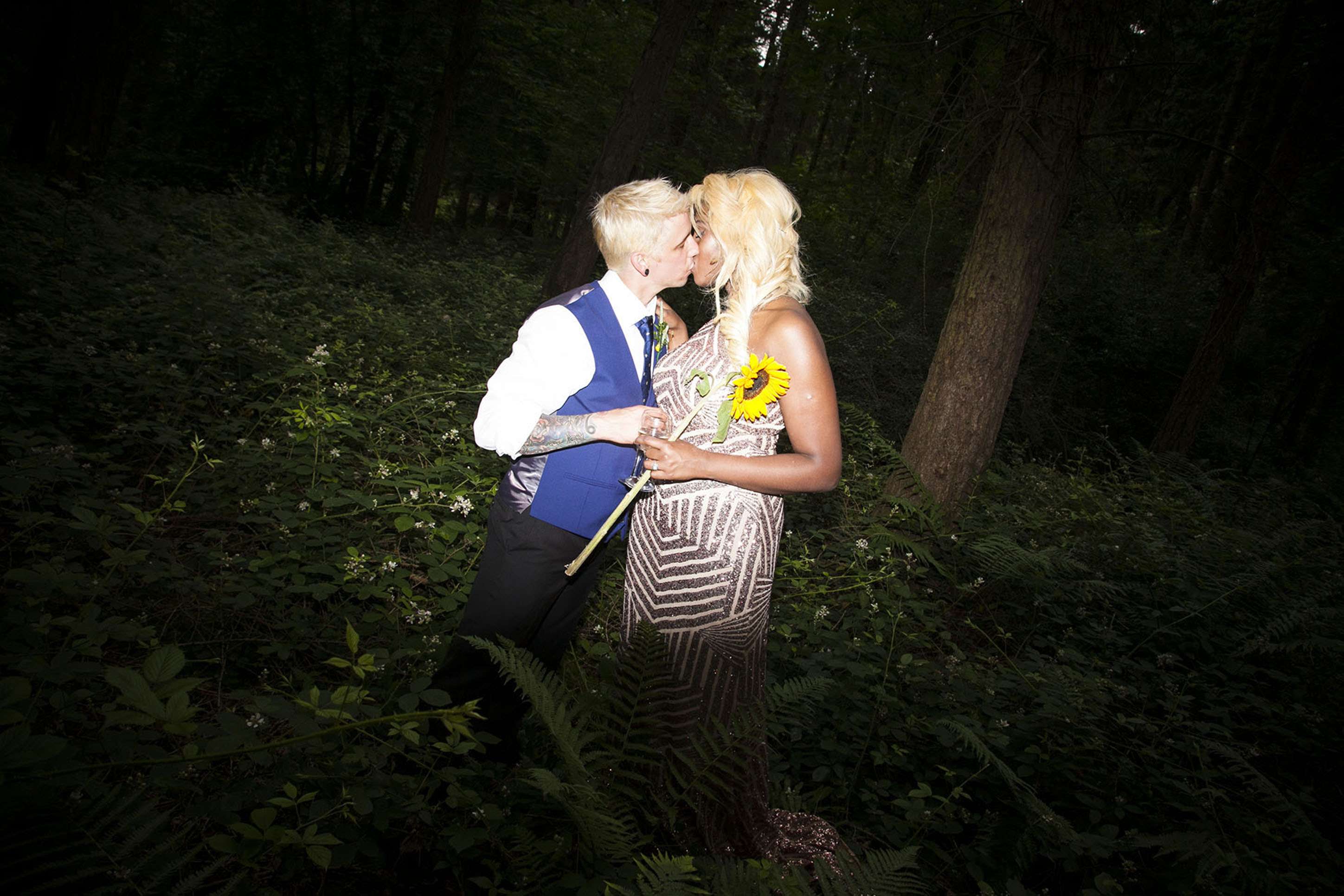 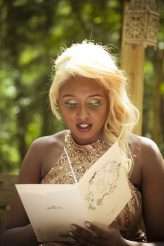 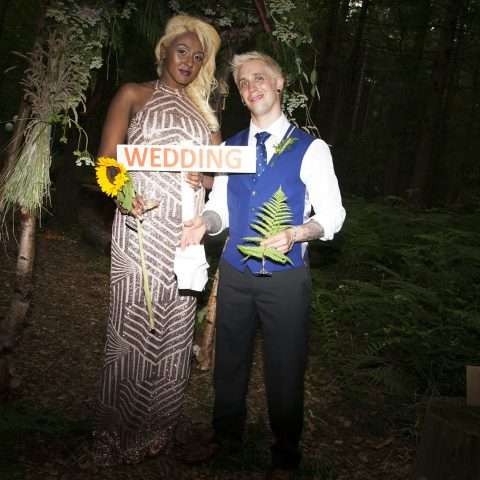 Nel and Matt were married in a restored 600 year old gate house at the edge of an ancient oak forest. The wedding was held on the eve of summer solstice. "We just wanted a relaxed wedding where everyone could enjoy the surroundings and the significance of where we were", said the bride. "Luckily the weather was on our side! As having all of our friends and family in one place is a once in a lifetime event, we didn't like the idea of taking off to a hotel whilst everyone else was still enjoying the night, so we camped on site with the rest of our friends in a bell tent that our bridesmaids had decorated beautifully."

Sustainable Festival Wedding in the Woods

Jo and Jonathan were married in June at Wise Wedding Venue in Kent. They wanted an outdoor ceremony, and a laid back reception so a festival themed day it was!