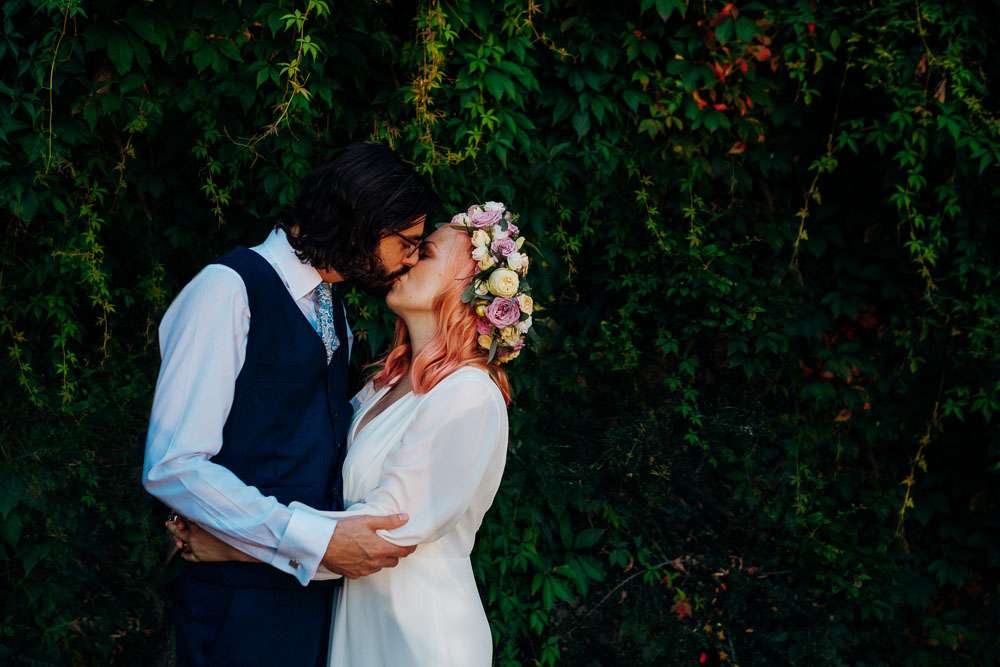 They were married at Ridge Farm in Sussex and had a wedding that felt quirky, fun and full of love. Tamsyn and Tom served pizza at dinner, tacos during the evening and decorated the tables with kitschy figurines that they’d collected from charity shops themselves.

The inspiration for our wedding was the venue”, Tamsyn explained. “Once we found it, that played a huge part into how we visualised the day. I had initially thought I would go for something very different than the one we ended up falling in love with. We had both initially really liked the idea of having a winter wedding at Wilton’s Music Hall in London, which is a venue that we’ve been to see various shows at frequently. But then as soon as we stepped foot on Ridge Farm, we both just fell completely in love with it and ran with an outdoor Summer wedding instead!” 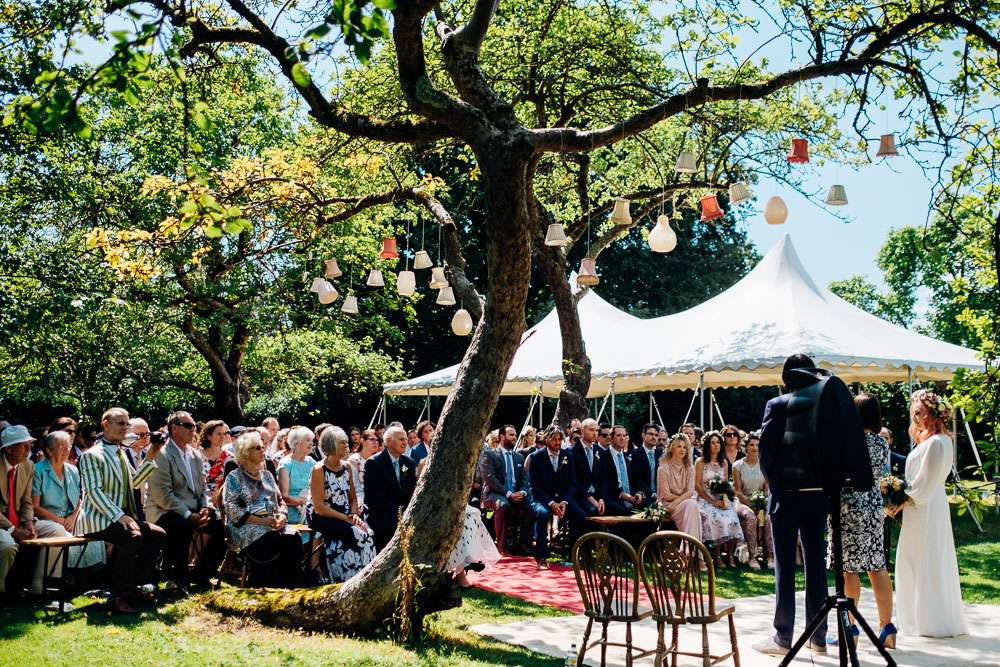 “We didn’t have a particular set theme, but we used a LOT of lampshades in our decorations. We also themed our tables around songs we love, and then bought kitschy bits and pieces from charity shops and car boot sale to fit the songs. For example, one of our tables was Love Cats, which we decorated by loads of cat figurines. We were quite picky about which bits to buy, favouring figurines that made us laugh, so the whole buying process took about a year to complete.” 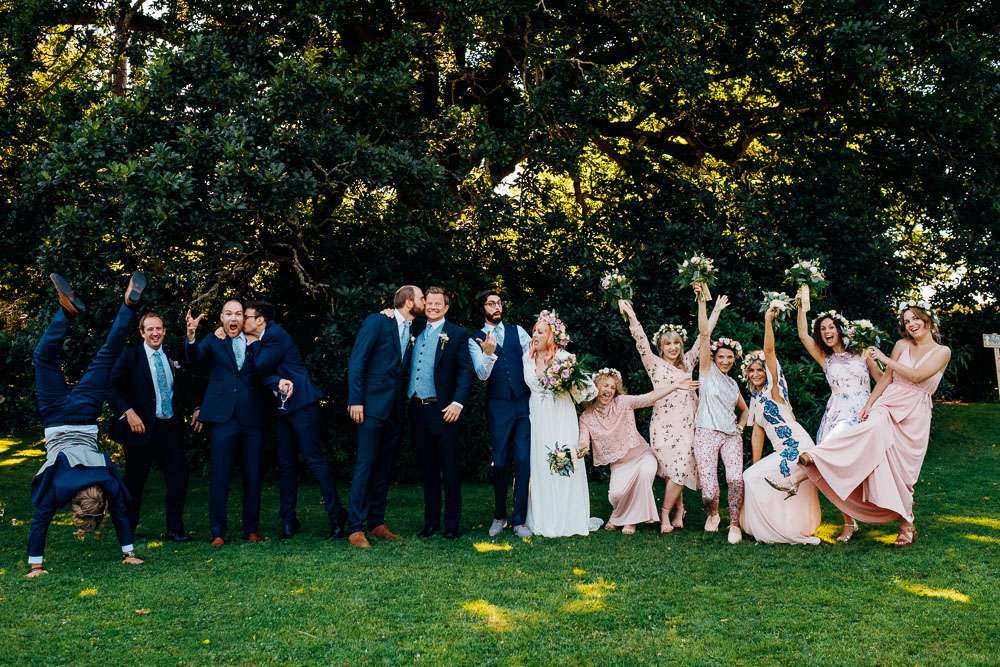 Music was also a very important aspect of the wedding. “We put a lot of thought into making sure we had very good music from start to finish”, she continued. “This included our excellent string quartet The Dotted Crotchets playing versions of some of our favourite songs throughout the ceremony and drinks reception. Our band, Alive, were also really brilliant (and lots of people also commented on their good looks!)” 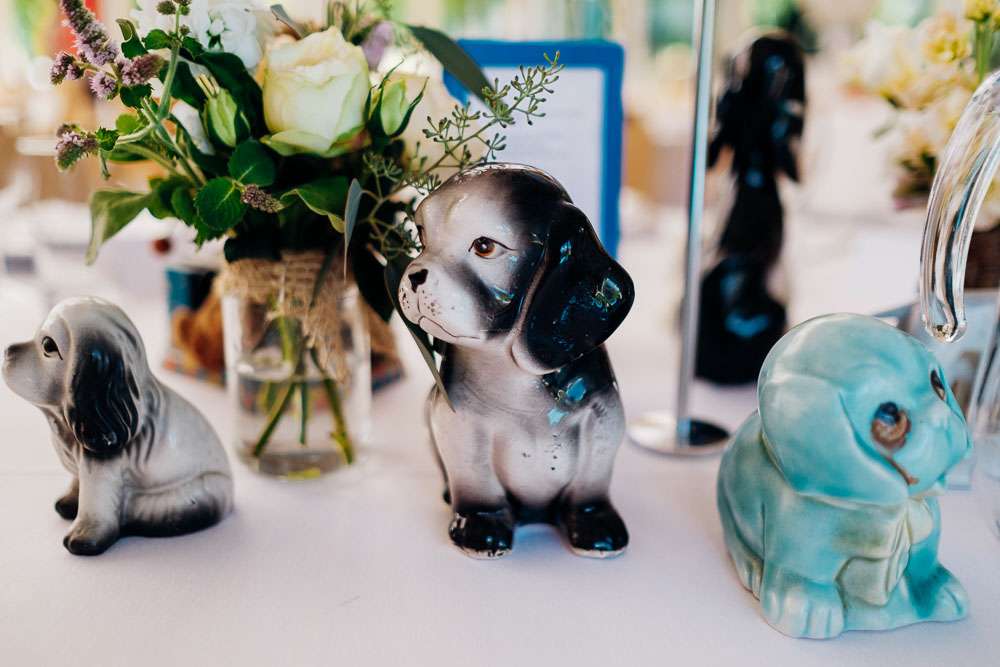 Serving pizza and tacos from trucks not only saved money over having a traditional three course wedding breakfast, but it made it a much more memorable experience. “Going with a pizza food truck for our dinner saved us so much money. We also made our invitations and collected everything for the decor from charity shops which saved a fair chunk too.” 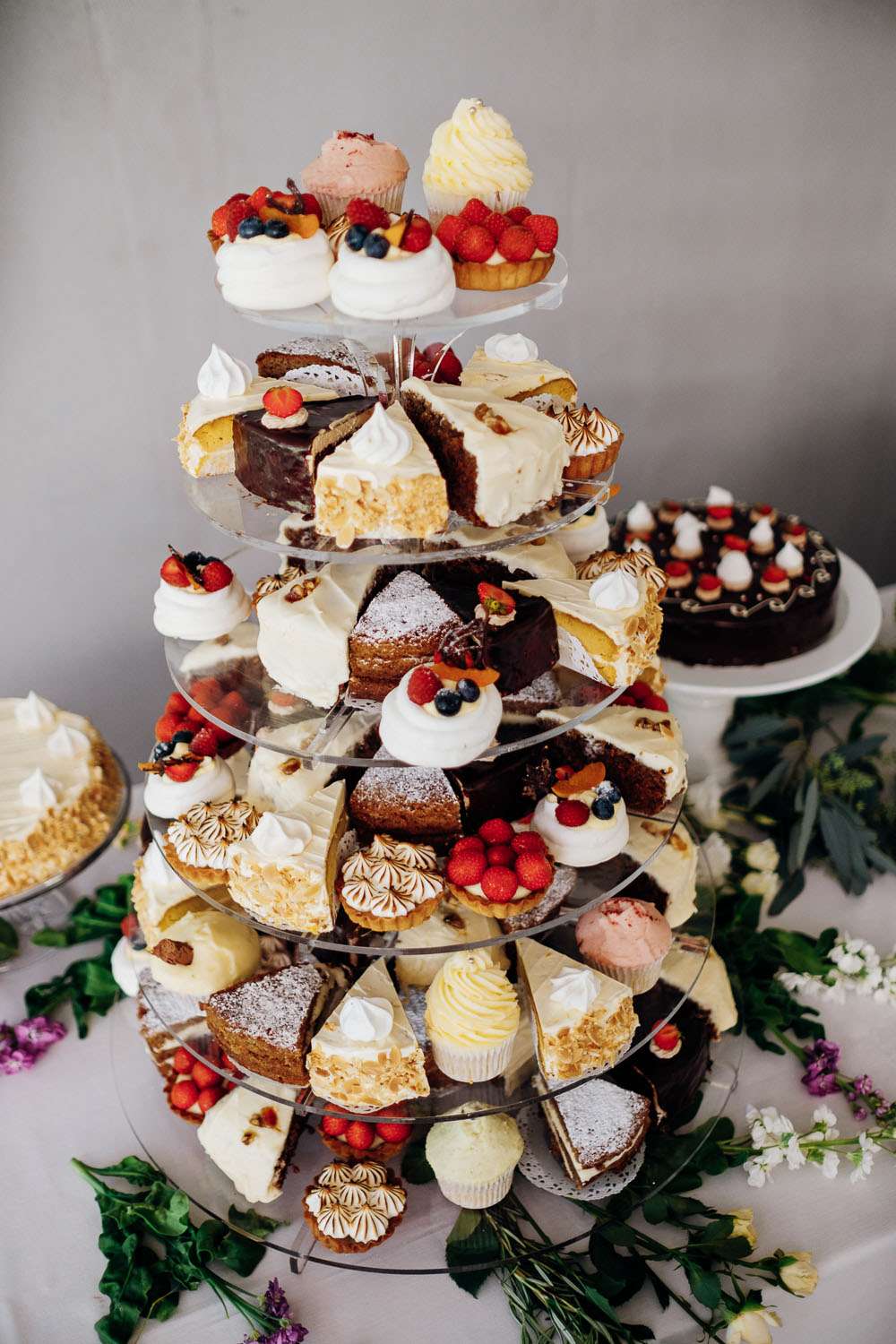 The ceremony was held outside, amongst the trees. “We found it quite hard not to follow the usual service/ drinks/ food/ dancing formula, but I think most people agreed it was a fairly unconventional wedding in a conventional format. Our ceremony was amazing, for both of us it’s up there as our favourite part of the day. That’s really down to our brilliant humanist celebrant, Zena Birch. She took the time to really get to know us and ‘our story’, so the whole ceremony felt incredibly personal.” 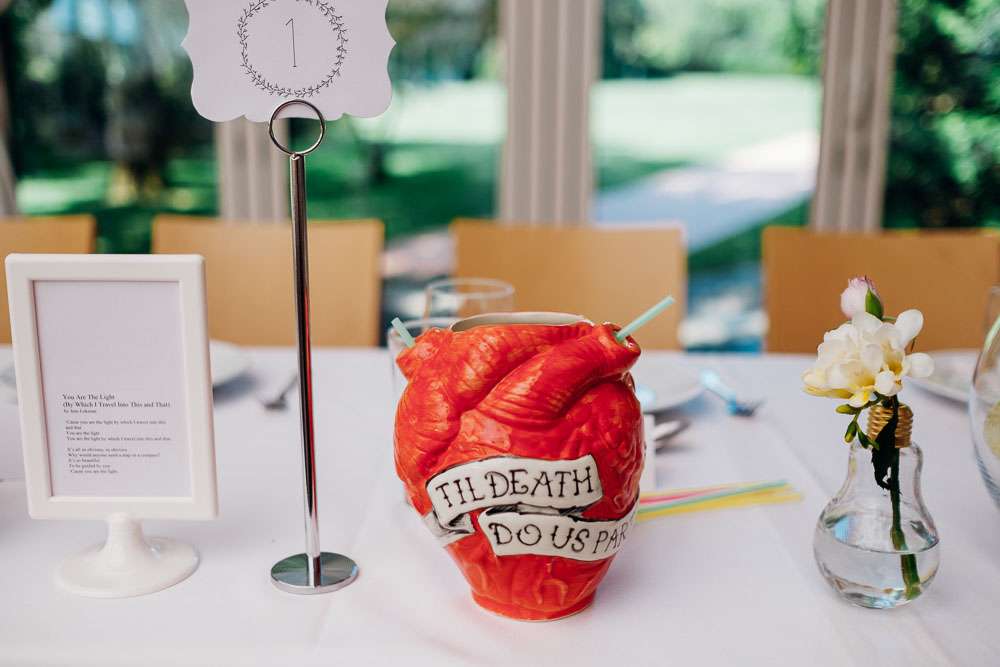 “I walked down the aisle to our string quartet playing the Twin Peaks theme tune. We had readings from three friends, which included the lyrics to a Sweet Baboo song, a specially written poem and a heavily improvised riff on a children’s book. Two of Tom’s friends played guitar and sang during the ceremony too, and there was a brilliant surprise for me when Zena announced that Tom would be singing to me – which was completely something that I would never have suspected in a million years. He sang The Luckiest by Ben Folds, accompanied by the String Quartet.” “The best thing about planning the wedding was that we did it together. I also loved scouring charity shops for our table centrepieces, there were so many funny little bits that we managed to find. Our advice to other couples would have games for people to play during the drinks reception. We made a cornhole and it was such a hit!  Also try to work on things gradually over time because no matter what it’s always going to be a rush at the end, so try to do as much as possible in advance.” 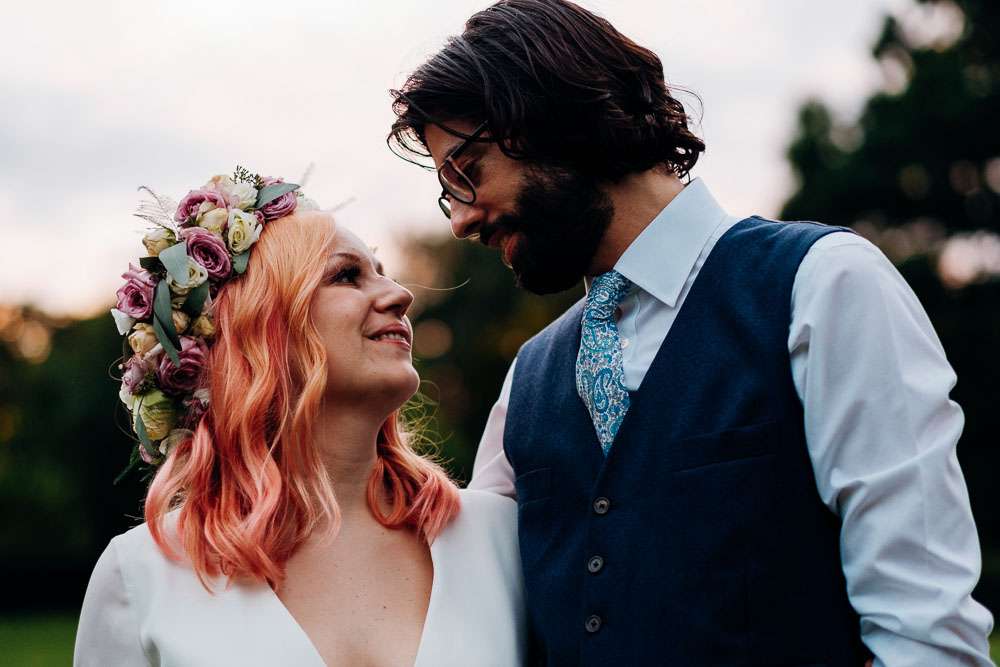 “Finally, get a good photographer! Wedding photography isn’t easy especially when you’re trying to heard non-complying relatives around! Marianne also really took on board our request to not have posed photographs or be taken away too long, and she documented the day absolutely perfectly. We have friends who’ve been really disappointed with their photographs and/or band, so it’s was so worth taking the time to seek out people who are really great.” 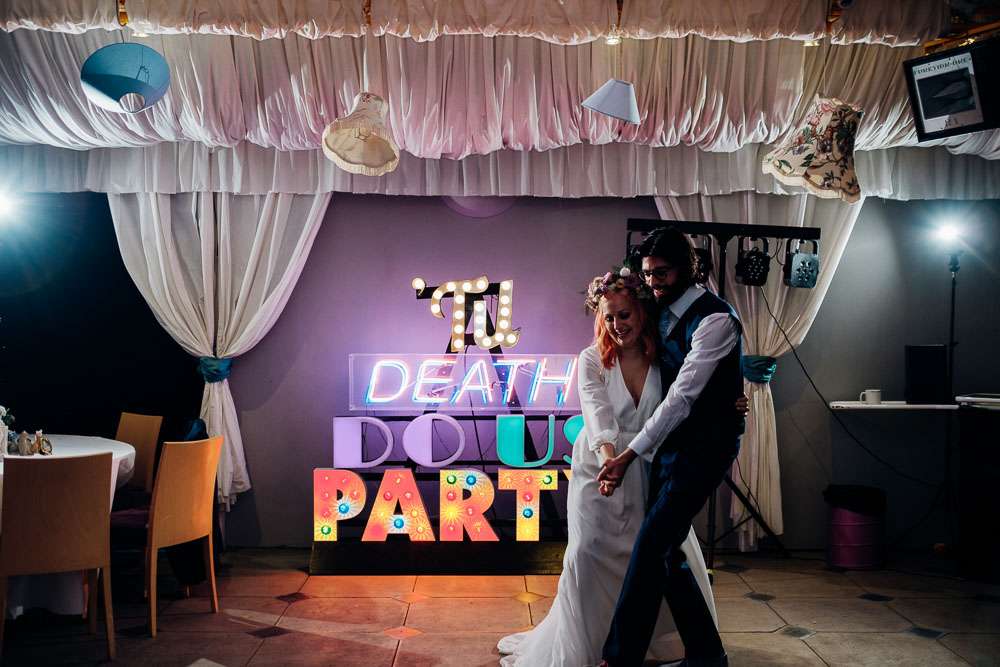 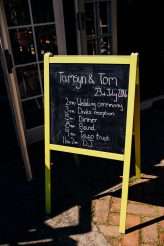 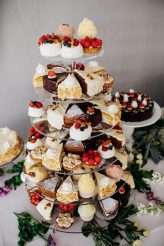 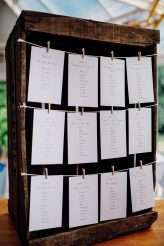 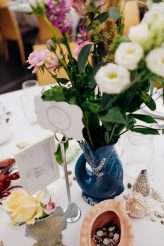 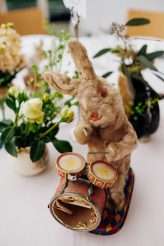 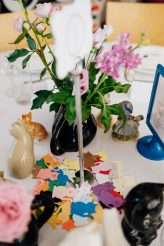 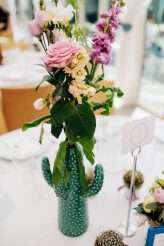 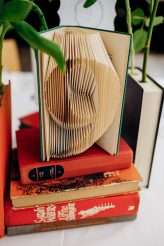 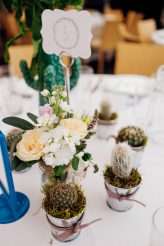 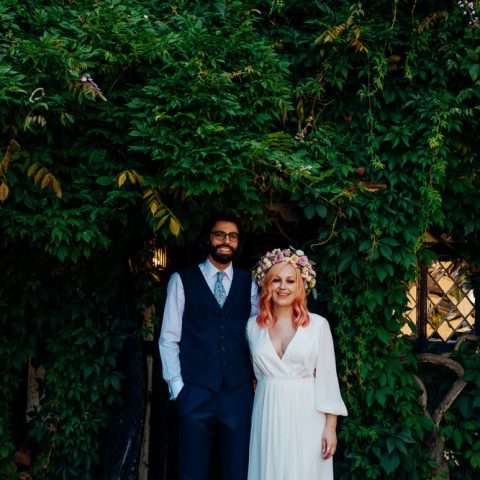 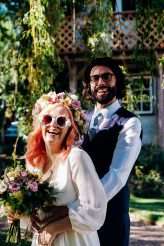